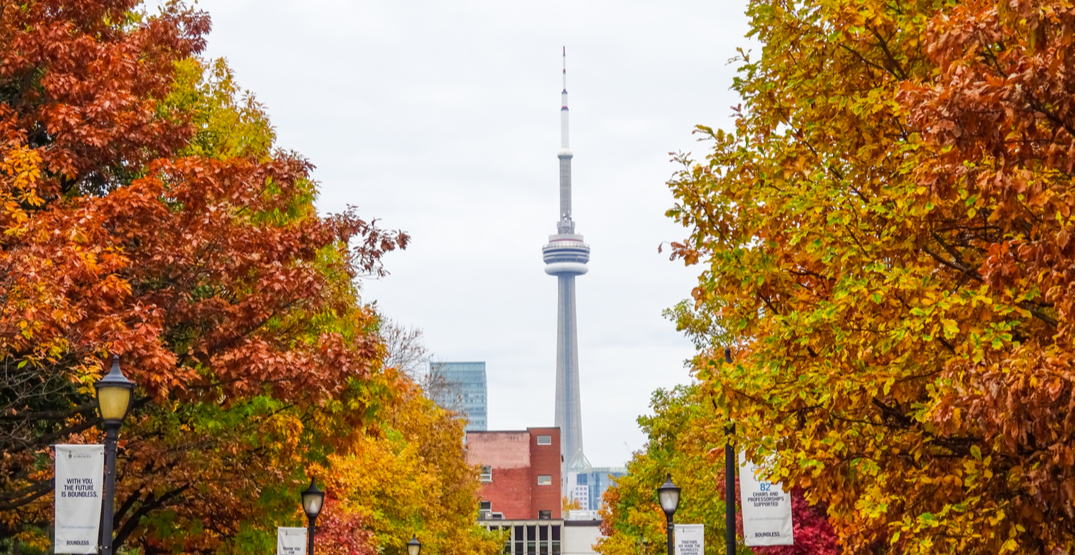 Fall can be a bit gloomy at times, but thankfully, Toronto hosts so many fun and exciting things to do during October.

Don’t let the weather dampen your mood! Go outside, get some fresh air and start working on your bucket list. Check out a horrifying haunted house, try new food, or check out a new art exhibit.

Take a look at what October has in store for you:

Take part in a haunted tour at Fear Farm

The spookiest time of year is fast approaching, and with it comes the reopening of Toronto’s legendary haunted farm. Fear Farm, located roughly an hour and a half from Toronto, is now welcoming guests for the spooky season. Brave visitors can embark on four different haunted tours, including the Hillbilly Hike, which takes you through an eerie swamp full of chainsaw-wielding maniacs.

Get in the mood for Halloween at Canada’s Wonderland

Halloween Haunt is back and ready to scare. The event runs until October 31, so make sure you get there to see the monsters for yourself and ride the rollercoasters at night. Be ready for some new scares this season as the monsters have had the entire pandemic to prepare for new ways to go bump in the night.

Canada’s Wonderland Halloween Haunt has revealed its huge lineup of spooky menu items this year, and it’s sure to scare your socks off. Nothing beats Halloween-themed treats. This year at Canada’s Wonderland, guests can treat themselves to all the best eats, from comfort food to boozy drinks at the park.

Get spooked at Casa Loma’s Legends of Horror

Casa Loma, the elegant castle overlooking Toronto, has summoned the un-dead and will bring back its annual Legends of Horror event this month. During October, fear and horror will take over the castle grounds, and guests will finally be able to get their scare on. The annual event is now in its sixth year, and tickets are now on sale.

Fall n’ Leaves is coming back to Toronto for its second year for the ultimate socially distanced outdoor event. From October 1 to 17, celebrate all things Fall while munching on delicious food like a wood fire pizza, Thanksgiving Poutine served in a pumpkin, and so much more.

Get ready for spooky season with a seance

The terrifying Eatonville Farmhouse seance is back as October marks the beginning of spooky season. Not for the faint of heart, this seance is restricted to 18+ due to its horrifying nature.

When: October 1 to November 27
Where: Broadacres Park Farmhouse, 450 The West Mall

Take in the lights at the Toronto Zoo

Visit the animals and walk through an immersive lighting display at the Toronto Zoo this fall. The 1.5 km experience will take you through a portal to the future to the year 2099. The lighting event begins after dark, starting October 1.

When: October 1 to 9
Where: Toronto Zoo

The third annual Fried Chicken Festival is back this weekend, and there will be a bunch of vendors serving up their renditions of the classic meal. Admission is free and will be located at Street Eats Market at Scarborough Town Centre, 520 Progress Avenue.

When: October 9 and 10
Where: Scarborough Town Centre, 520 Progress Avenue

Colossal Cookie Company is coming to Toronto with a pop-up pickup boutique in the Fairmont hotel. The company currently functions predominately online, but this pop-up will allow Torontonians to pick up their premium cookie orders. Well known for its four-ounce cookies, the company will operate the pop-up pickup boutique for three months, beginning on October 1. You can place your order and pick up your cookies in as little as 30 minutes.

A cranberry marsh near Toronto begins its harvest this Saturday ahead of Thanksgiving and you can wade with the berries and later enjoy a cheese plate. Located at Muskoka Lakes Farm & Winery, Johnston’s Cranberry Marsh is the perfect place cranberry lovers, who can step into a pair of hip waders and take the plunge with thousands of pounds worth of cranberries.

PumpkinFest Toronto is back this fall after a year-long hiatus, and guests can experience the best of the season with fun activities and food. From October 9 to 11, the annual event is coming back to Downsview Park, offering a giant pumpkin patch, fun games, kiddie rides, an inflatable corn maze, and of course, food.

Dave’s Hot Chicken has opened its third Toronto location and is welcoming hungry customers to the east end. The new restaurant is located at the corner of Queen Street East and Bertmount Avenue at 1130 Queen Street East.

A Thanksgiving long weekend booze cruise is coming to the city, and they’ll be playing all the hits from Top 40 to dance hall. The event is 19+, and the boat will be departing from 11 Polson Street, Rebel Nightclub parking lot. Bottle service, drinks, and food are available on the boat. Tickets can be purchased here.

Stop and try a new cafe on Toronto’s King Street

A new coffee shop has opened in downtown Toronto and it offers more than just your regular coffee and baked goodies. Daily Ritual Cafe is located in the lobby level of One King West Hotel and Residence, 1 King Street West.

Check out the Marvel Avengers S.T.A.T.I.O.N

The exhibition features several rooms from the Marvel Cinematic Universe, each one dedicated to a notable hero such as Captain America, Iron Man, Black Panther, Black Widow, Captain Marvel, The Hulk, and more. Make sure to buy your tickets!

Oktoberfest at Fall N’ Leaves TO Pop Up

Make sure to reserve your table ahead of time. Tickets are sold to groups of four or six, and each one includes a drink per person.

The Mac and Cheese Festival

Bring on the cheese! The ultimate Mac and Cheese fest is coming to Toronto this month, and vendors have come up with elaborate twists on the classic dish. Admission is free!

Ontario Place is treating horror movie fans to a wholly immersive experience with their Haunted Cinema drive-in this month. Movie-goers will be able to watch the film from their car while people dressed in character perform just outside their doors.

Experience one of the biggest and brightest light event this Halloween season. From the creators of Journey into Enchantment Christmas Drive-Thru Festival, Spooktacular Light Show will showcase over 1.5 million Halloween lights, a pumpkin tunnel, 3D displays and so much more.

PumpkinFest Toronto is back this fall after a year-long hiatus, and guests can experience the best of the season with fun activities and food. From October 9 to 11, the annual event is coming back to Downsview Park, offering a giant pumpkin patch, fun games, kiddie rides, an inflatable corn maze, and of course, food.

Pingle’s Farm, located an hour outside of Toronto, is hosting its annual harvest festival through the month of September and October. Attendees can hit up the 6.5-acre corn maze, hitch a wagon ride or indulge in some farm treats from the menu.

Where: 1805 Taunton Road East, Hampton, Ontario
When: Fridays, Saturdays, and Sundays until October 31

With more than 250 artworks, including paintings, drawings, photographs, films and installations, Warhol made a name for himself in the art world, one that will be recognized forever. The exhibition will feature portraits of Elvis, Dolly Parton, Karen Kain, Wayne Gretzky and Elizabeth Taylor. It will also include Warhol’s conceptual works and experimental installations. It will run until October 24 at the AGO.

Where: 317 Dundas Street West
When: Until October 24

Looking for a haunted house that is not recommended for the faint of heart? Head to Toronto’s west end and explore the scariest haunted house on the block. Tickets are on sale for October, and it’s sure to give you a scare.

When: Until October 31
Where: 7 McIntosh Avenue

Check out the Pulse Topology exhibit

An immersive light and sound installation are coming to The Bentway in downtown Toronto this October. It’s called Pulse Topology because the exhibit uses touchless technology to detect visitors’ heartbeats and twinkle in time with them. In this way, the art will change with every visit.

Where: The Bentway
When: October 2 to 31

Get tickets to this year’s Fan Expo

Fan Expo Canada is now slated to take place from October 22 to 24 at the Metro Toronto Convention Centre. “Toronto is on a path to safely reopen, but now more than ever, it’s important we all do our part,” the company stated on its website. Anything and everything that has to do with comics, sci-fi, anime, and more.

Shop for a spooky Halloween costume

Spooky season is here, and it’s time to start brainstorming a costume idea. Luckily Toronto has a variety of stores to execute the grand plan you’re dreaming of.

Whether it’s a recent pop-culture phenomenon, a Halloween classic, or a go-big-or-go-home theatrical costume, you can find it in the city.

When: Until October 31
Where: Several locations across Toronto

Explore the Beyond Monet exhibit

Toronto’s Beyond Monet exhibit has been extended for another month due to popular demand. Previously set to run until October 3, the show will continue to welcome visitors until November 7.

A deliciously sweet candy exhibition has opened up at Bayview Village Shopping Centre, and it’s showcasing a unique and creative take on the world of candy. Candyland is the brainchild of the New York candy lifestyle brand by robynblair in partnership with the shopping centre. The pop-up features art prints with Haute BV slogans, an eight-foot gumball walk-in photo-op, walls lined with gumball machines, and colourful candy boxes.

When: Until December 2021
Where: Bayview Village Shopping Centre – 2901 Bayview Avenue

Apple picking season in Ontario has arrived, and GTA orchards have various apples just waiting to be plucked and made into your favourite fall treat. Make a day of it, pick your own fruit, get lost in a corn maze and indulge in some baked goods.

When: Fall season
Where: Several locations across the GTA