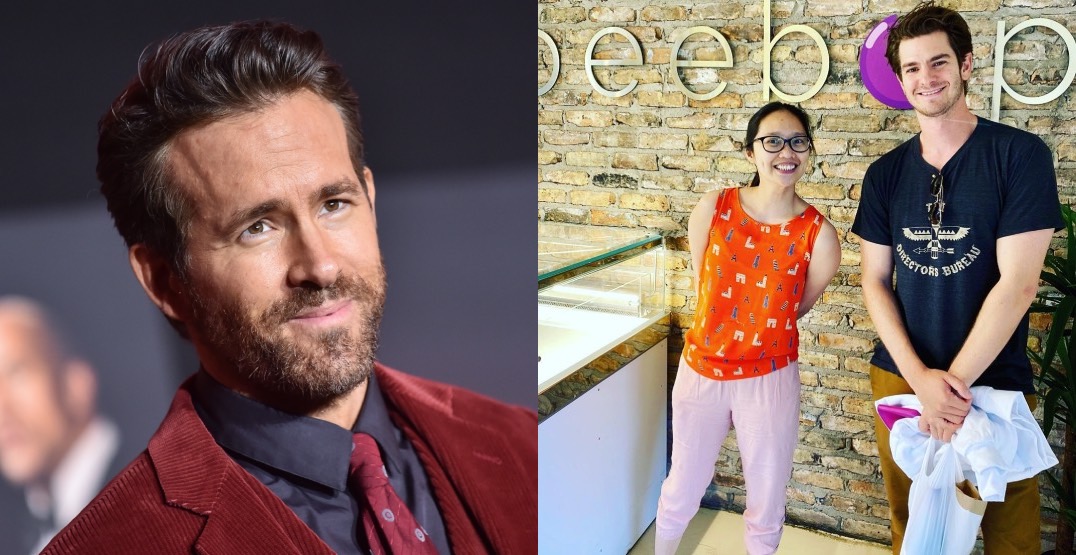 Especially with the return of film production, comedy shows, concerts, and more, celebrity sightings seem to be popping off in Canada recently.

There is also no shortage of A-listers who call Canada home. So what do celebs get up to when they’re out and about?

With so many great dining options across the country, there are bound to be some shoutouts and celebrity sightings at Canada’s best spots.

Funny enough, these two appeared on an episode of The Late Late Show with James Corden in April, promoting different projects filmed in Calgary.

They then talked about their experience and brought up a popular restaurant on 17th Avenue.

Sweet Jesus shared a picture on Instagram of the 19-year-old Vancouver star visiting its John Street location and gave Wolfhard a little shoutout.

“Stranger things have happened than this but shout out to @finnwolfhardofficial for stopping by our John Street location,” read the caption.

The super-popular singer from Vancouver recently went on an iced-coffee tour of YVR, shouted out Timbiebs, and even ate a massive three-foot-long hot dog at a baseball game.

Canadian pop star and So You Think You Can Dance finalist Tate McRae was spotted at 17th Avenue’s newest cocktail bar at the end of April.

“The beautiful & Talented @tatemcrae gave us a visit!!” nueyyc posted to Instagram. “Congratulations on the new album #iusedtothinkicouldfly.”

McRae, who was once called a “gift from God” by Paula Abdul, was likely taking some time off to celebrate her new album. She was also about to go on tour in the United Kingdom, Australia, and the United States.

House of Gourmet, Tachi at the Chef’s Assembly Hall, and Sabai Sabai in Toronto

Good partnerships are all about compromise.

Case in point – when the @GoogleCanada team asked me to do a #Pixel6 video that “reflected my individuality”… I grabbed a camera crew, ate three dinners, and then went to a Raptors game.

In December, the Marvel superhero actor caught a Raptors game and showed off three of his most-loved eateries: House of Gourmet, Tachi at the Chef’s Assembly Hall, and Sabai Sabai.

“You can always find your way to House of Gourmet,” boasted Liu, mentioning that it’s the only spot in the city where you can get Ginger Scallion Lobster at 2 am.

“It’s just such an iconic Chinatown restaurant with a massive menu that basically never closes.”

The second time Model Milk has appeared on this list! What a celeb hot spot.

An iconic photo was taken in April when all four main hobbits from the Lord of the Rings Trilogy of movies were spotted in Calgary.

Elijah Wood (Frodo), Sean Astin (Sam), Billy Boyd (Pippin), and Dominic Monaghan (Merry) had a meal together, and it was definitely one for the fans.

The four attended the 2022 Calgary Comic and Entertainment Expo, not too far from the popular restaurant.

This was one of the most incredible celebrity sightings in recent memory because it felt like a reunion at The Shire.

While speaking with Daily Hive in a video interview about her latest movie, Marcel the Shell with Shoes On, the actor/comedian told us where her favourite place to eat in Canada was.

We asked if the delicious Indian restaurant she was referring to was Vij’s, the celebrated and award-winning spot on Cambie Street.

Garfield was in the city to film the first season of Under the Banner of Heaven, a new miniseries from FX Productions and Imagine Entertainment.

Garfield has been on a tremendous run lately, especially with his return as Spider-Man and his leading performance in the Academy Award-nominated Tick, Tick, Boom. It was one of Calgary’s most exciting celebrity sightings in a while.

Daily Hive was lucky enough to talk to Garth Brooks during his YEG stop, and we didn’t miss the chance to ask him about his favourite food.

Garth couldn’t name any spots during his last visit to Edmonton when he sold out Rogers Place Arena, but he did have the food he sought.

“We love pizza,” said Brooks. “Last time we were here we hit up three or four spots and tried them all. That’s the complete food right there.”

The music icon, known for hits like Schools Out, Poison, and No More Mr. Nice Guy, popped into Buffo Ristorante for a meal in April 2022.

Cooper ordered the Seafood Arrabbiata, easy on the spice, and Diet Coke. He then graciously took photos with some of the members of staff who were on shift.

He was in town for his show at the WinSport Arena at Canada Olympic Park.

Jimmy O. Yang – the actor and comedian, best known for his roles in Silicon Valley and Crazy Rich Asians – visited Vancouver in May and had the chance to try out a few of the city’s best spots.

Reynolds recently sat down with director and fellow Canadian Shawn Levy to talk about all things British Columbia.

They also chatted about restaurants they loved.

He had many great things to say about each establishment, but none better than Minerva’s, which he called his “favourite restaurant in the world.”

Shawn Levy, mentioning Vij’s, revealed it was the “best Indian” he’s ever had.