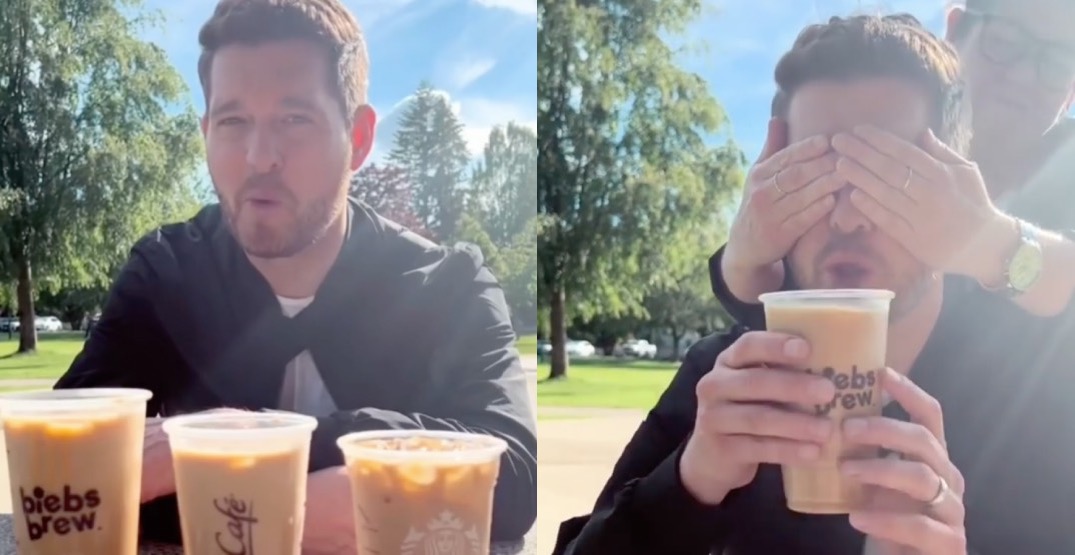 Michael Bublé has certainly been showing up a lot lately.

Back in December 2021 when Justin Bieber and Tim Hortons collaborated for the first time the crooner shared a reaction video, and now, with the new drop from the duo, he’s at it again.

Biebs Brew has hit the market, and it looks like Bublé had to make it a priority to show the world exactly what he thinks of it.

“Bieber has a new collab with Tim Hortons, so obviously this takes precedent,” the singer said in a video posted on Instagram.

Bublé then drove around to three different popular fast restaurants, singing, dancing, eating fries and burgers, listening to Bieber’s hits, and grabbing coffees for a blind taste test at the end.

He stopped first at Tim Hortons, then went to McDonald’s, and finally hit Starbucks.

“Justin claims it’s more delicious than any other coffee, but we need to do a blind taste test,” he said.

At the McDonald’s stop, he asked the employee working the drive-thru window if he was a “big Justin Bieber fan like me?”

Once he had all three iced coffees lined up, he was ready to try each one with someone covering his eyes while taking a sip.

After tasting each one, he picked his favourite one as…Biebs Brew!

He did the blind tasting one more time, and the answer was still the same, even though he didn’t seem super happy about it.

“Why are you so damn delicious?” Bublé yelled at the camera. “I hate that I love this!” he yelled as he kicked the (empty) cup jokingly.

The video was captioned, “I’m so happy for him! So happy and not at all jealous.”