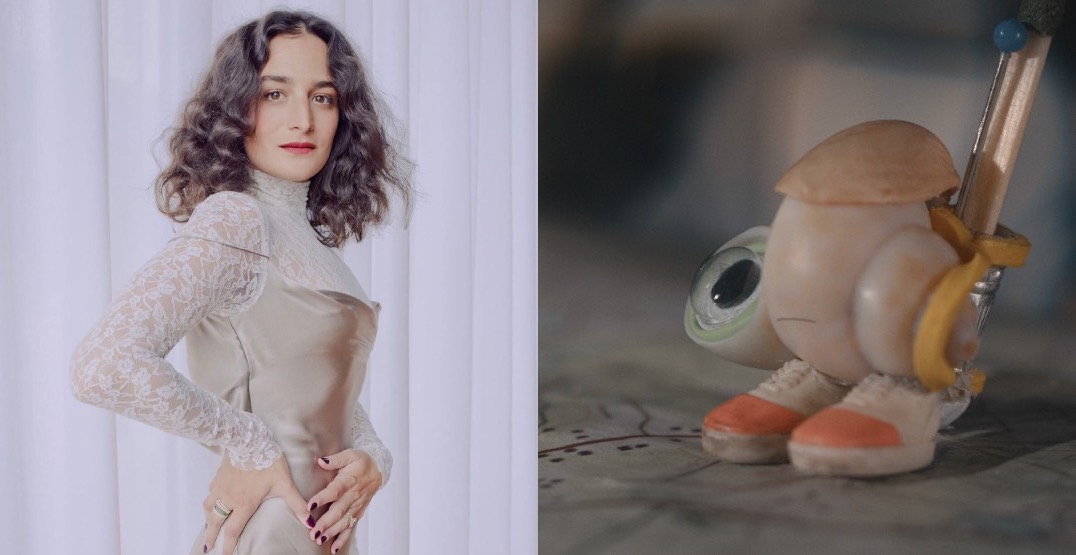 Jenny Slate has had a busy year.

She starred in Amazon’s I Want You Back, A24’s Everything Everywhere All At Once, and was the voice of characters on Big Mouth, Muppet Babies, The Great North, and Bob’s Burgers, the show and the new film.

In her latest movie, which comes out Friday, June 24, she returns to her much-loved character after a decade with Marcel the Shell with Shoes On.

Co-created and co-written with Dean Fleischer Camp (who is also her ex-husband) in 2010, it’s been a decade since we’ve seen Marcel on screen — and that was just on YouTube.

The character first emerged from Slate’s imagination out of boredom, being stuck in a living situation with four people (including Camp) and doing funny voices. Slate found the sweet, raspy, and adorable voice of Marcel, followed by jokes, improvisation, and story.

Slate spoke with Daily Hive in a video interview about the seven-year journey it took to create this movie, how she sees the character of Marcel the Shell, and her thoughts on the recent overturning of Roe v. Wade in the United States. 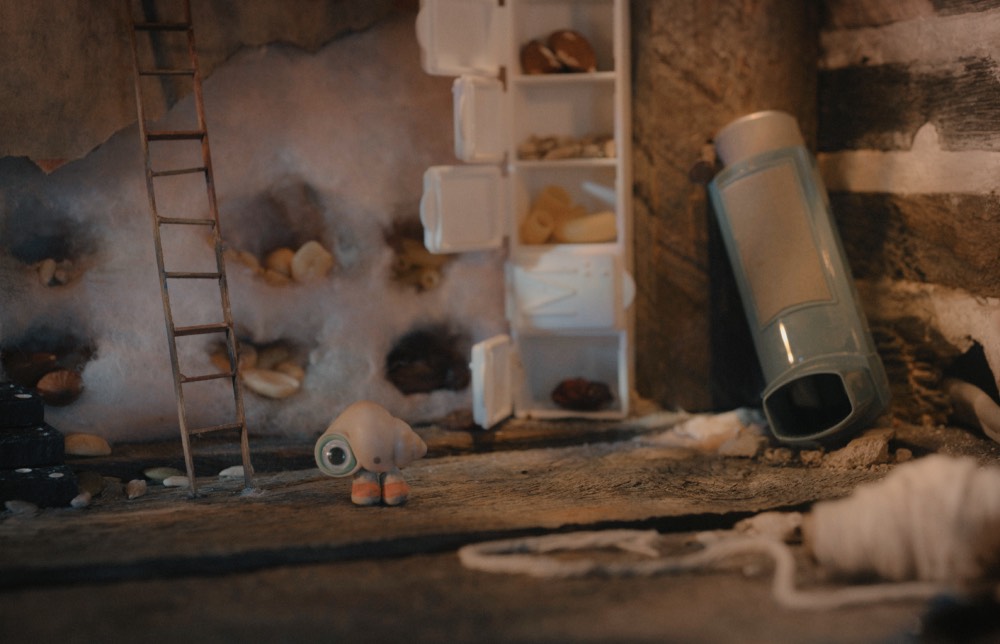 “I love the character of Marcel,” Jenny Slate told Daily Hive on a Zoom call, talking about this character she’s been portraying for over a decade. “I like how he behaves, and I know how he behaves.

Marcel is an adorable, 1-inch-tall shell who navigates and explores the world as we know it with ingenuity, charm, and hysterics, like using honey at the bottom of his shell shoes to climb walls.

Slate has a deep connection to the fictional Marcel; it goes deeper than the creation and animation of it all but also the therapeutic nature of playing him.

“Sometimes I’m an impulsive person, sometimes compelled to be honest for better or worse,”

“I don’t think that I’m unkind. I reveal myself sometimes in a risky way.”

“Marcel is a little bit more controlled. It’s a safe space to be in while being allowed to improvise. I like that the world of Marcel has really important and high stakes. It’s the stakes of the heart. I’ve always found those to be the most important ones,” she added.

Marcel may be a lonely shell with shoes on who uses tennis balls to get around, but after a few minutes, he feels entirely real. Part of that is because the world that interacts with this walking and talking shell doesn’t seem to think it’s impossible for him to exist, but also because he acts entirely human.

“Sometimes what I feel sad about – I have noticed it from time to time in myself — is that sometimes that type of stamina and commitment is only…we say that only children can have it because they haven’t been through life yet as if life will wear you away, and it certainly can, but I like Marcel as an example of a fully developed person who chooses to still be sweet and to try.”

“And he has fear, and he as doubt, and he has attitude,” Slate added. 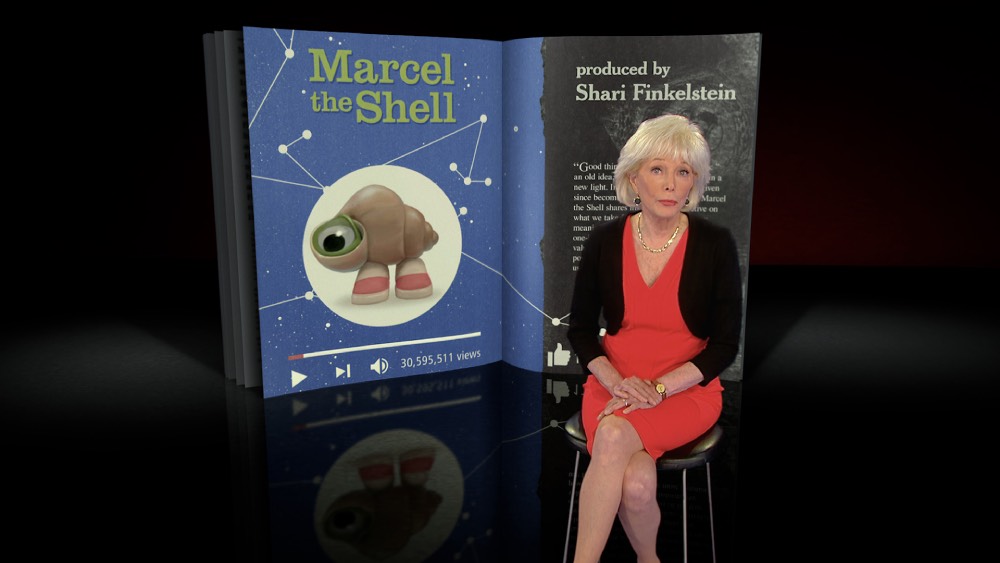 Despite what might appear child-like and uncynical in a rare way, there’s also a humorous edge to him. He gets grumpy, and he can throw barbs. Slate knows that he is “not a child.”

“I’m interested when people describe him as having a childlike innocence because I think that he is a person who expresses himself in a way that feels non-performative and not affected by culture,” said Slate. “Not affected by how he’s supposed to appear, and also, he’s been through grief at the start of the movie. He’s been through loss.”

“I would say he’s very mature rather than childlike.”

In this new movie, we learn that Marcel is not alone but living with his grandmother Connie (played by the iconic Isabella Rossellini) as the last remaining shells following an unknown horrific event.

The themes, along with grief and heartbreak, mainly focus on isolation and the desperate need to be together with the ones you love. It sounds heavy, but Camp and Slate use these weighty subjects to lift the audience into a community, speaking directly into the camera documentary style rather than bogging the viewer down with sadness.

It sounds like a story birthed from a quarantine-created mindset, but it’s been a much longer journey.

“It took seven years to make the movie,” said Slate. “It seems like a very fitting response to the quarantine and COVID; we were actually thinking about this five years before that.”

“You can take anything you want and project it onto this movie. It’s there for you for that. Our movie has a really open heart, and it is sort of strange that now the way that people might lean on it is different than what was intended, but it’s there.”

The open heart aspect of the movie is especially resonant right now in the United States following the recent US Supreme Court decision to overturn Roe v. Wade. States can now individually decide if they want to ban abortions.

Slate on the overturning of Roe v. Wade in the US

Slate starred in 2014’s Obvious Child, one of the best movies on abortion, and she spoke about her thoughts on the decision that passed on June 24.

“When we made Obvious Child, we showed a depiction of a person getting a legal procedure,” said Slate. “She wasn’t a rich person.”

“What’s going to happen now to people in the United States who need an abortion? Unless they’re wealthy or live in a state where abortion is legal, they’re not going to have access.”

“I’m deeply at odds with it. It’s shameful. We also can’t turn away, and we can still participate in not just protest, which we certainly should, but building relationships with each other, keeping our communities close, making art and involving ourselves with beauty.”

“When we made Obvious Child, I didn’t ever think that this day would come but were here, and so am I, and I’m here to stand with all of the people who oppose this heinous decision.”

Obvious Child is a film people should seek to watch whenever and however they can, and Marcel the Shell with Shoes On is yet another story from Slate for people to connect with.

Marcel is sweet, kind, and hopeful, despite the death of a loved one, a relationship, and even the death of one’s anonymity. Even the spiders that watch from the lawn are non-threatening to him.

Marcel isn’t just a sweet movie to watch with hilariously dark edges but a profoundly resonant story about the human (or shell) condition.

Marcel the Shell with Shoes On opens in Toronto, Vancouver, and Montreal on July 1 and then expands across Canada on July 15.