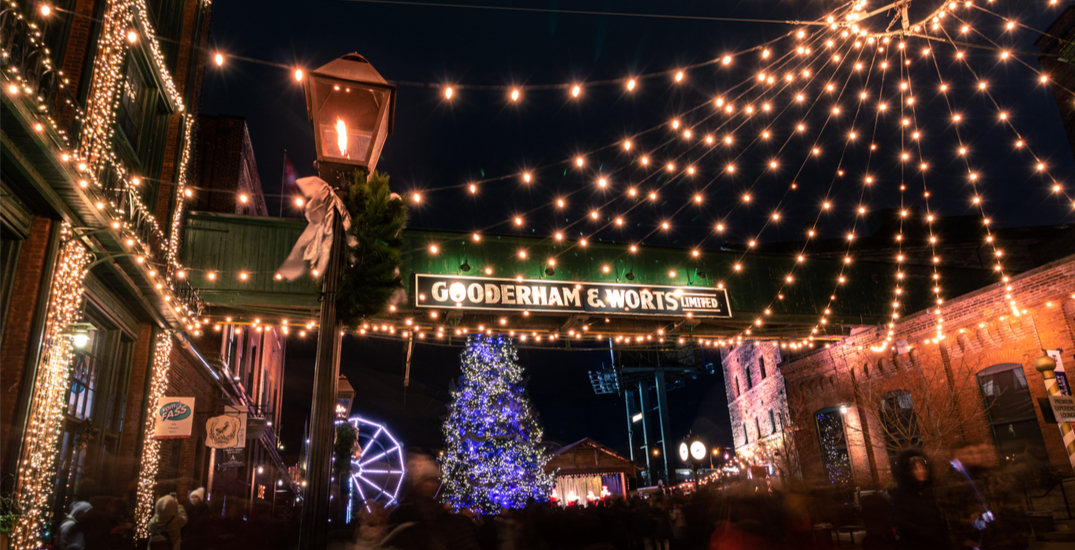 It’s starting to get cold in Toronto but despite the chilly weather, there are a lot of events popping up across the city for the month of November.

You can only stay at home, under your warm blankets for so long. It’ll soon get boring and you’ll want something fun and exciting to do.

Good thing Toronto is a busy city and there are tons of things to do that’ll keep you on your feet.

Here’s what the month of November has in store for us:

The annual Toronto Christmas Market is back

The Toronto Christmas Market is set to reopen next month, but with a major rebrand. The classic holiday festival has been renamed “The Distillery Winter Village” for the 2021 season, a spokesperson confirmed to Daily Hive. The Winter Village will be a more “intimate, elevated event,” with “less of the festival feel” of past years.

When: November 18 to December 31.
Where: 55 Mill Street – Distillery District

Watch a movie at the Cinesphere

Ontario Place’s Cinesphere is set to reopen on Friday with a hotly anticipated Marvel movie shot in IMAX. The Cinesphere closed, along with much of the world, in 2020 when the COVID-19 pandemic was declared. Now, after nearly two years, it will finally reopen to the public.

Explore the Beyond Monet exhibit

Toronto’s Beyond Monet exhibit has been extended for another month due to popular demand. Previously set to run until October 3, the show will continue to welcome visitors until November 7.

Munch on gravy-filled poutine at this festival

Street Eats Market is debuting the Toronto Poutine Festival on November 6 to 7, and it’ll be filled with vendors serving its own renditions of the classic Canadian cuisine.

Canada’s Wonderland is bringing back its holiday-themed WinterFest this year, starting on November 13. The immersive holiday experience features millions of lights, many Christmas trees throughout the park, more than a dozen live shows, and ice skating on Snow Flake Lake.

Snow Magic is an immersive drive-thru experience that will open up on November 12, and it features artwork by some of Canada’s most acclaimed artists. The winter wonderland, put on by Drive Thru Fun Co., will boast mythical creatures, a crystal-like cavern and a forest of light. The artists involved are used to making heads turn with installations at Nuit Blanche and Burning Man.

Niagara Falls is coming in hot this holiday season with its annual Festival of Lights and a huge outdoor Christmas market with more than 50 vendors. The market is set to open up on November 13, after the city’s Santa Claus Parade. There will be a Christmas tree lighting which will mark the opening of the market.

Go for a winter skate at a new rink

Toronto is about to get a new skating rink in an old location. Still plagued by the same infrastructure issues that kept it out of service last season, the Harbourfront Centre’s permanent rink will not be used this winter. The new setup features an ice loop that winds through the “south orchard” and connects back to the main rink—a configuration they’re “quite excited” about, the spokesperson said.

When: Starting November 19
Where: The Harbourfront Centre – 235 Queens Quay West

Toronto’s newest immersive art exhibit is set to open its doors next month. Immersive Klimt will begin welcoming guests into the lavish world of its namesake artist on October 21. The exhibit promises to “provoke your senses” as you journey through Gustav Klimt’s most famous paintings, including “The Kiss,” “Flower Garden,” and “The Tree of Life.”

The AGO is hosting the Picasso: Painting the Blue Period exhibit, the first exhibition in Canada that focuses on the early works of the modernist artist. It will feature more than 100 objects from 15 different countries. There will be paintings, sculptures, and works on paper by Picasso, including works by artists the Spaniard is known to have studied before and during the Blue Period.

Jump into the immersive world of the Nutcracker

Toronto is getting yet another immersive experience, but this time it’s festive. The city will play host to the world premiere of The Immersive Nutcracker, A Winter Miracle, next month. Guests are placed in the middle of the classic Nutcracker story as dazzling projections swirl around the room and dancers from the Bolshoi Theatre twirl to the music of Tchaikovsky.

When: From November 20 to December 24
Where: 1 Yonge Street

Make your own one-of-a-kind KitKat bar

KitKat fanatics are in for a real treat! Toronto’s Yorkdale Mall now has its own creator studio for custom KitKats, but only for a limited time. Until November 13, the KitKat Chocolatory will be inviting shoppers to its KITKAT MADE 4 U creator studio to create a one-of-a-kind chocolate bar.

When: Until November 13
Where: KitKat Chocolatory – Yorkdale Mall

The terrifying Eatonville Farmhouse seance is still here despite the spooky season being over. It’s not for the faint of heart, this seance is restricted to 18+ due to its horrifying nature.

When: Until November 27
Where: Broadacres Park Farmhouse, 450 The West Mall

The Canadian Pet Expo is back this holiday season and pet owners can frolic through the exciting holiday marketplace, stock up on the cutest pet toys and treats for your furry friend. It’s a pet-friendly event where your adorable four-legged friend can even take a picture with Santa.

When: November 20 to 21
Where: International Centre – 6900 Airport Road, Mississauga

Watch over 130 trees light up on Bloor Street

On November 27, the Village of Yorkville Park will light up along with 138 trees along the Bloor Street corridor for the holiday season. There will also be a free performance by international pop-star Kiesza.

When: November 27
Where: Village of Yorkville Parl in the area of Cumberland Street and Bellair Street

Shop at the One Of A Kind event

Support local businesses and splurge on Christmas gifts for your loved ones. The One Of A Kind show is back this year, bringing the most talented creators across Canada all under one roof.

When: November 25 to December 5
Where: Enercare Centre, Exhibition Place

Check out the Toronto Artisan Market

Here’s another chance to support local vendors. The Toronto Artisan Market promotes “local production of sustainable goods to support the economic development and livelihood of our local artists.”

The Seasons Christmas Show will bring the local craft and maker community back together to create a unique shopping experience for guests looking to find gift inspiration.

When: November 12 to 14
Where: International Centre (Hall 3), Mississauga

Get inspired by The Atelier 25 Awards

The Atelier 25 program has been tailored to showcase 25 inspirational game-changers, go-getters, innovators, advocators and creators who are making this world a better place. From entrepreneurs to leaders, get inspired at home through this virtual award ceremony.

When: November 18 at noon ET
Where: Online

The creators of Pumpkins After Dark have set up a 2.5 kilometre-long trail filled with thousands of glowing pumpkins and Halloween displays at Country Heritage Park in Milton. Guests can visit in a car with friends or family and tune into the event’s radio station as a musical score accompanies the festive decorations, jack-0-lantern tunnel, and more.