It’s safe to say that the Disney+ series Pam & Tommy has been a viral hit in recent weeks. The biographical miniseries is based on the whirlwind love story of Vancouver Island’s own Pamela Anderson, played by Lily James, and Mötley Crüe drummer Tommy Lee, portrayed by Sebastian Stan.

More specifically, the series delves into the theft of their infamous sex tape by Rand Gauthier, played by another British Columbian: Vancouver born-and-raised Seth Rogen.

Due to Pamela’s Canadian heritage, BC (and some other provinces) got a few mentions on the eight-episode series.

Pamela is discovered at a BC Lions game

In real life, Pamela Anderson was “discovered” at a BC Lions game against the Toronto Argonauts when she was just 22. The series tells a version of events, dating the game to August 1989 (though, there are conflicting reports — with many believing the actual game was in July 1989). 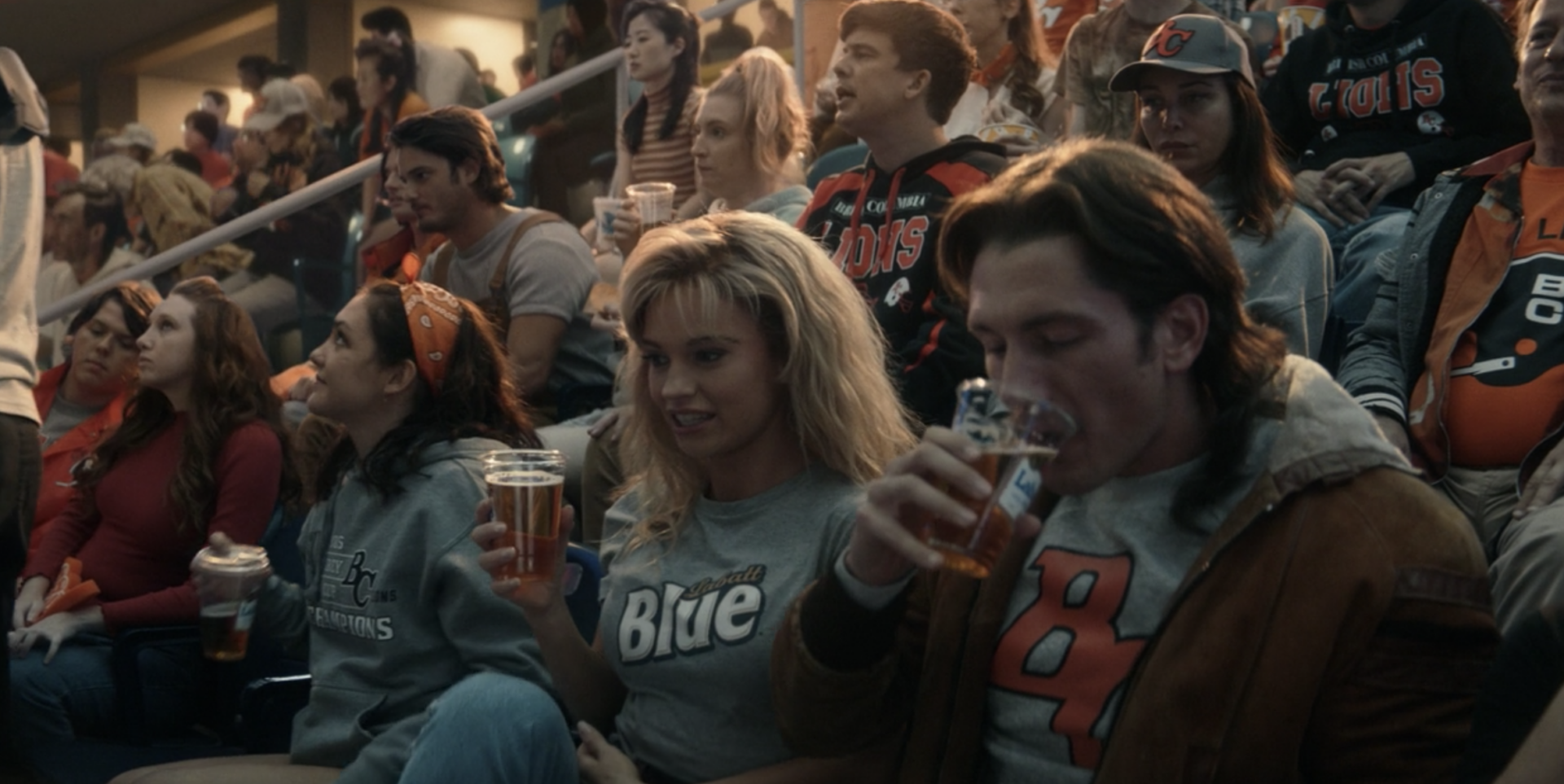 Lily’s Pamela attends a BC Lions game in a flashback scene. (Disney+)

Lily’s Pamela attends the game rocking a Labatt Blue crop top, while her unnamed ex-boyfriend rocks a BC Lions hoodie. A sea of orange jerseys and shirts are seen in the crowd behind them as they root for the Vancouver-based CFL team. 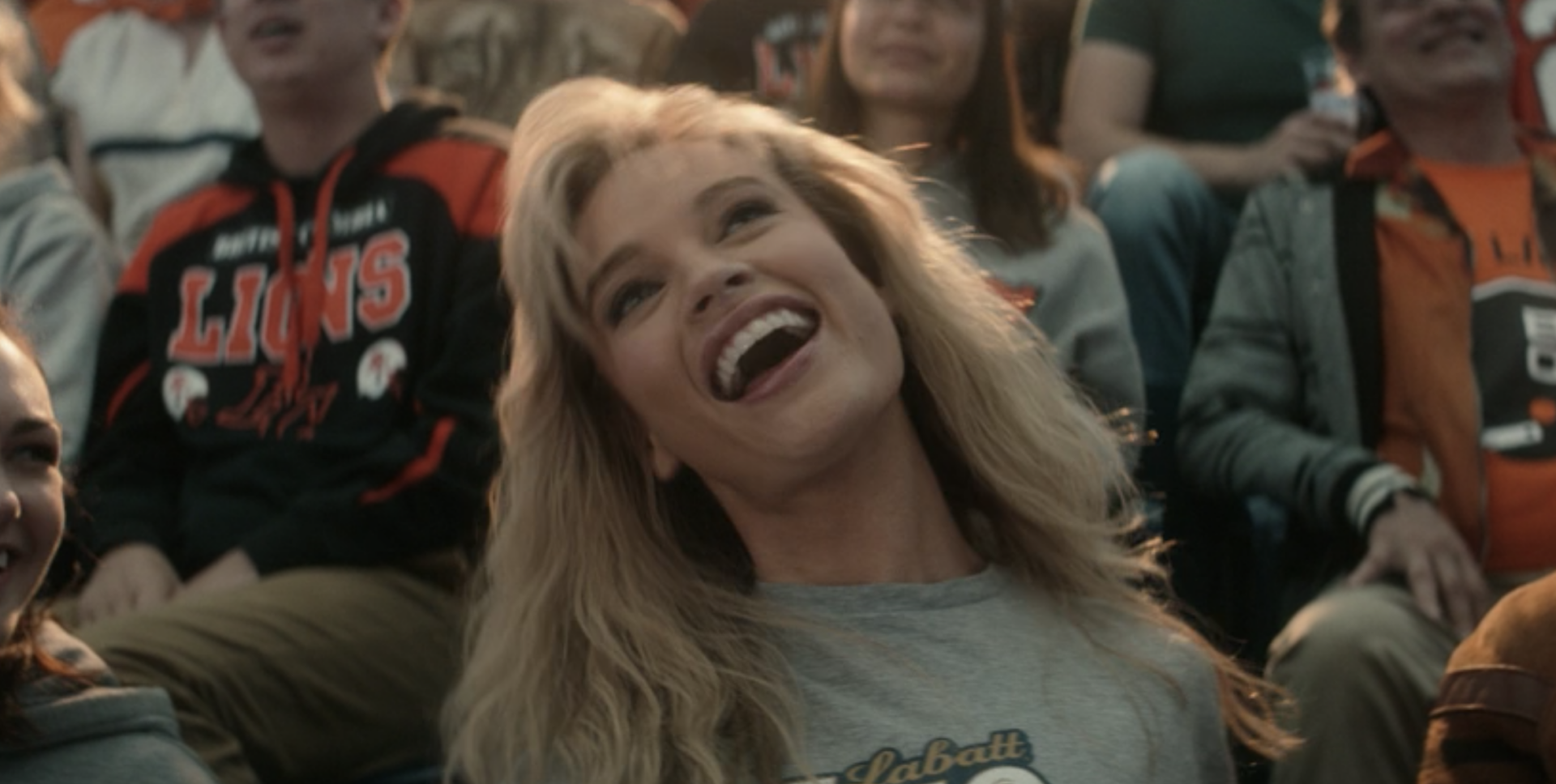 BC Lions jerseys and gear can be seen on extras behind Lily James’ Pamela Anderson. (Disney+)

As Lily’s Pam sips a beer, she inadvertently finds herself on the “Labatt Cam” — prompting their VP of Marketing to come over and introduce himself.

In real life, Pamela Anderson was discovered at a BC Lions game after being featured on the Jumbotron. (Disney+)

“I saw you on the Jumbotron,” the man, named Dennis, says as he hands over a business card. “Have you ever done any modeling? We’re always looking for fresh faces.” The rest, of course, is history.

Multiple mentions of Ladysmith, BC

Pamela’s hometown of Ladysmith comes up several times in the show — including in the second episode when Tom and Pammy get married in Cancun. “I don’t do drugs. I’m a good girl — a good Christian girl from a small town in Canada,” Lily’s Pamela says to bad boy Tommy, played by Stan.

A young Pamela is also seen working at the Ladysmith Diner in the late 1980s in episode 6. Shortly after being discovered at the BC Lions game, she returns back to her restaurant job where she uses their phone to contact Roger Dennis, the VP of Marketing at Labatt.

Lily James as Pamela Anderson at the Ladysmith Diner. (Disney+)

The call lead to her becoming the “Blue Zone Girl” in an ad campaign for Toronto-based beer company — ultimately prompting Playboy to call for some “test shots.” 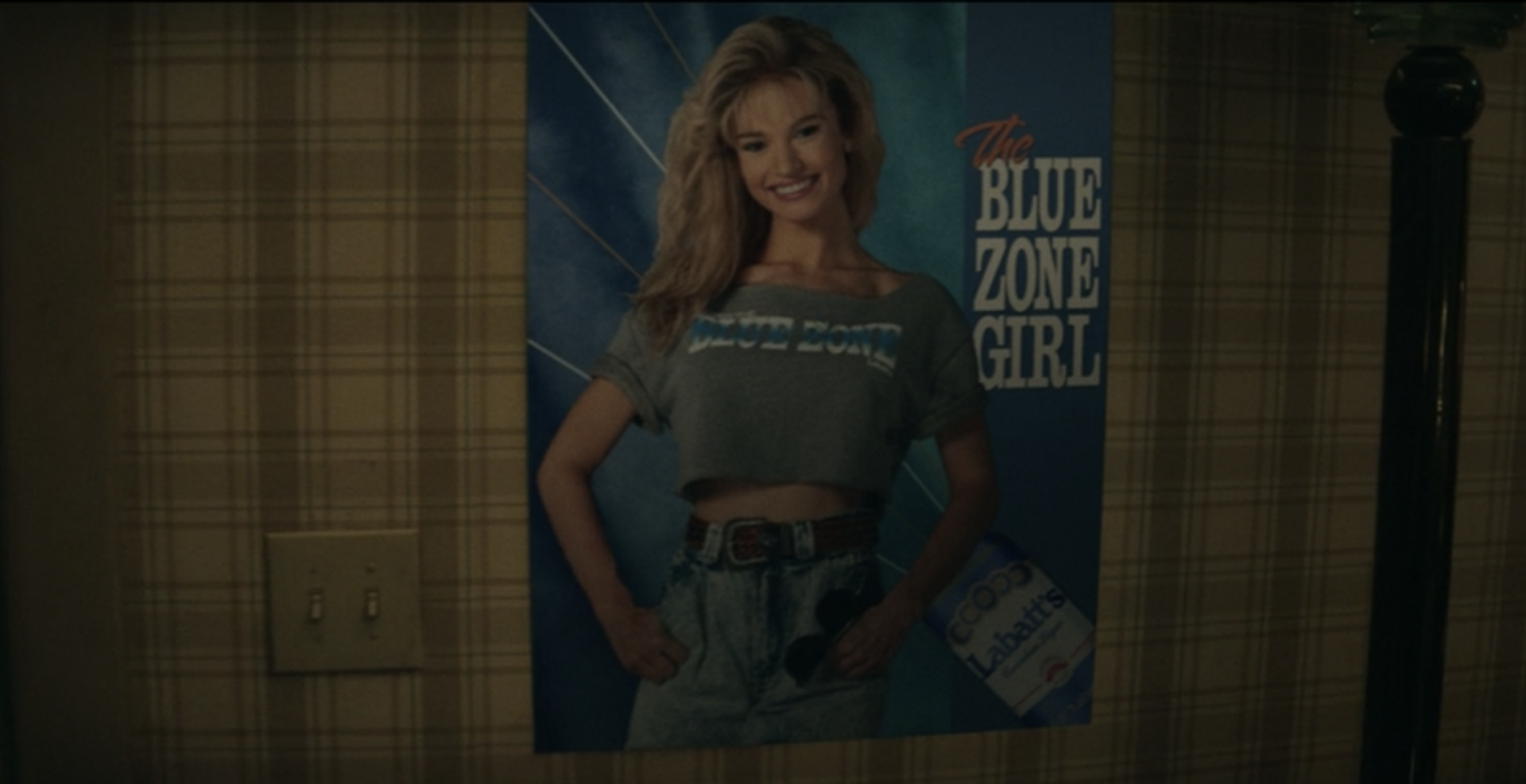 Pam’s mother Carol Anderson — an island native — then appears as she accompanies Pam to the Playboy Mansion in Oct. 1989 for her first-ever cover shoot.

Pamela’s mother Carol Anderson, played by Dendrie Taylor, accompanies her daughter to the Playboy Mansion for the first time. (Disney+)

Hugh Hefner tells Pam after the shoot: “You’re not in Ladysmith, Canada anymore — now it’s the whole world that will be watching…women like you come around once in a generation.”

At one point, a pregnant Pam (with the couple’s first son Brandon, now 25) threatens to return home to Ladysmith amid mounting stress and arguments with Tommy. In real life, the actress still maintains a home on Vancouver Island.

The show thinks Montreal is in Ontario

As Pamela is about to call the VP of Marketing from Labatt, viewers get a close-up look at Dennis’ business card. In a bizarre error, the card says the company is based in “Montreal, Ontario” — not Quebec. 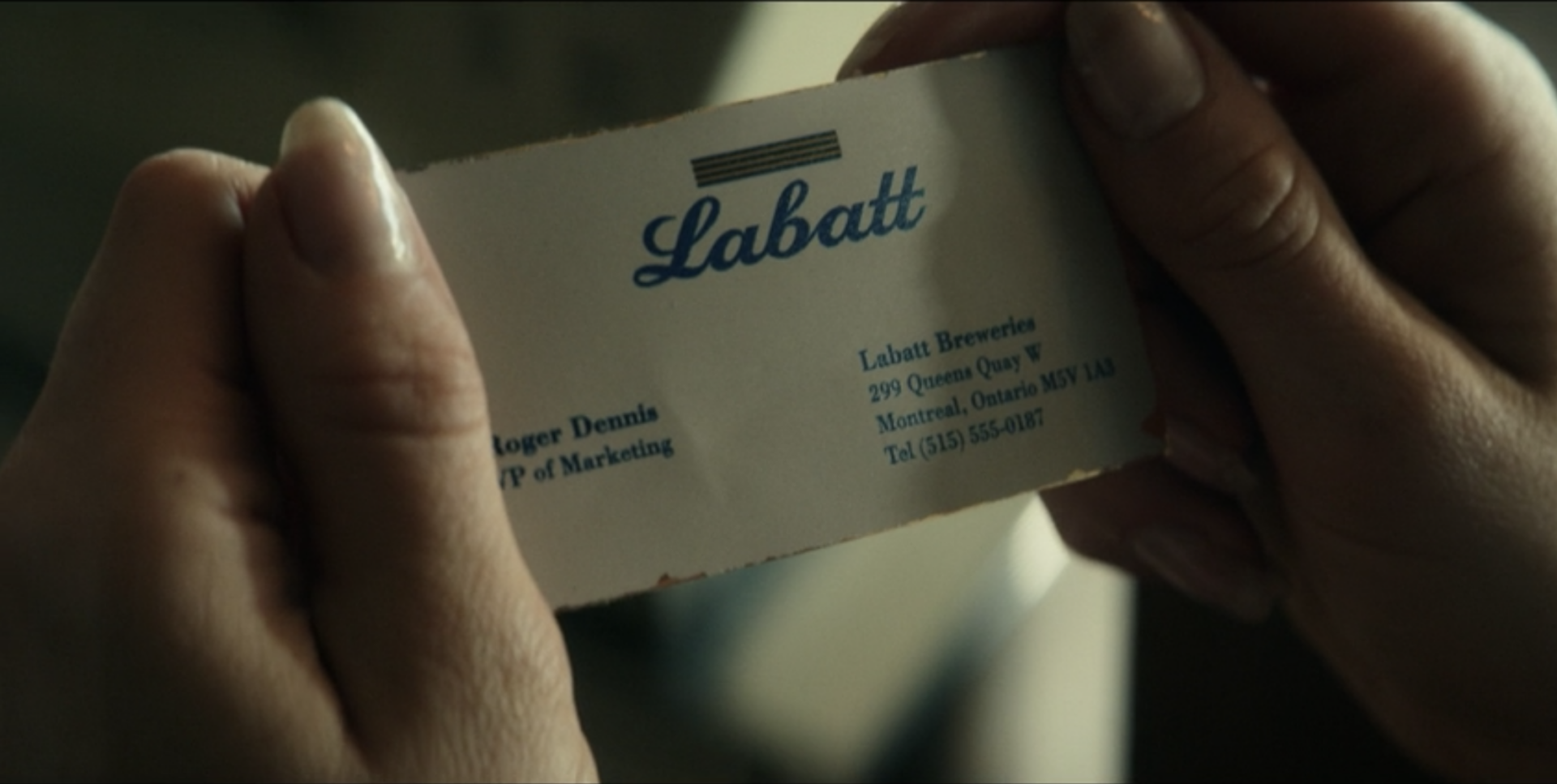 Lily’s Pamela is seen with a Labatt business card indicating that Montreal is in Ontario. (Disney+)

Oddly, the address listed — 299 Queens Quay W with an M5V postal code — which really is the headquarters of Labatt.

The “515” area code phone number throws in another wrench of confusion, though: 515 is nor the area code for Quebec or Ontario, but rather the U.S. state of Iowa.

The moment stirred up some drama on Twitter, with Canadians calling out the producers of the show — including Vancouverite Seth Rogen, who has an EP credit.

In episode 2, Lily’s Pamela flies to Cancun for a conference to meet the various networks that aired Baywatch in the 90s. While at dinner, one of the attendees questions, “I understand you’re from Canada?” before adding that he “used to work in Calgary.”

“CBRT — I was the station manager up there,” he says. CBRT refers to the call letters for what is today known as CBC Calgary.

Lily’s Pamela explains she hails from Ladysmith on Vancouver Island, noting that it’s “near Vancouver but it’s pretty small.” The man then says, “Vancouver — CIVT, our sister station…really funny story about their transmitter tour,” referencing what is known today as CTV Vancouver (or once VTV).

The timing here doesn’t exactly make sense, though: CIVT (aka CTV Vancouver) didn’t sign onto the air until September 22, 1997 — then as VTV. Given that the scene takes place days before Pam and Tommy’s Feb. 1995 wedding, CIVT wouldn’t have existed. Calgary’s CBRT, however, went to air for the first time in 1975.

Miltie heads to Montreal to set up a bank account and deposit cash. (Disney+)

Offerman’s Miltie immediately comes up with a plan to have the operations finances “off shore” — and flies to Montreal to deposit a briefcase of cash at a Canadian bank.

After Uncle Miltie’s trip to French Canada, viewers start to see how his business venture with Rand works: interested buyers in the sex tape can go to a website to purchase, where they are instructed to send a check to an Ontario address.

As TORONTO flashes on the screen, a young man is seen holding a single cheque as he heads into the back of a barbershop — the location of where Rand and Miltie are accepting the funds. The same man is then seen taking a massive stack of cheques to a Toronto bank — presumably the same account opened in Montreal — for deposit.

A slew of cheques being deposited into a Toronto bank. (Disney+)

The Toronto appearance is, however, one of the poorest shots in the series: the Disney+ (Hulu in the US) series was shot in Los Angeles and made no effort to hide California’s signature palm trees. An alleged Toronto bus is also seen, but blue — not red like TO’s street cars and public transit.

Pam and Tommy discover the tape is being sold in Canada

As the tape begins to gain more traction underground, with multiple sites and people selling copies, Lily’s Pamela becomes stressed about how so many people are seeing it. The A-List couple doesn’t yet have internet access at home, and make their way to the nearby Malibu Library to check out Rand and Miltie’s site themselves.

Lily’s Pamela and Sebastian’s Tommy use a Malibu library computer to discover their sex tape is being sold via Canada. (Disney+)

As Tommy scrolls the page to see “if there’s a phone number,” an exasperated Pam tells him to click the “purchase” button. 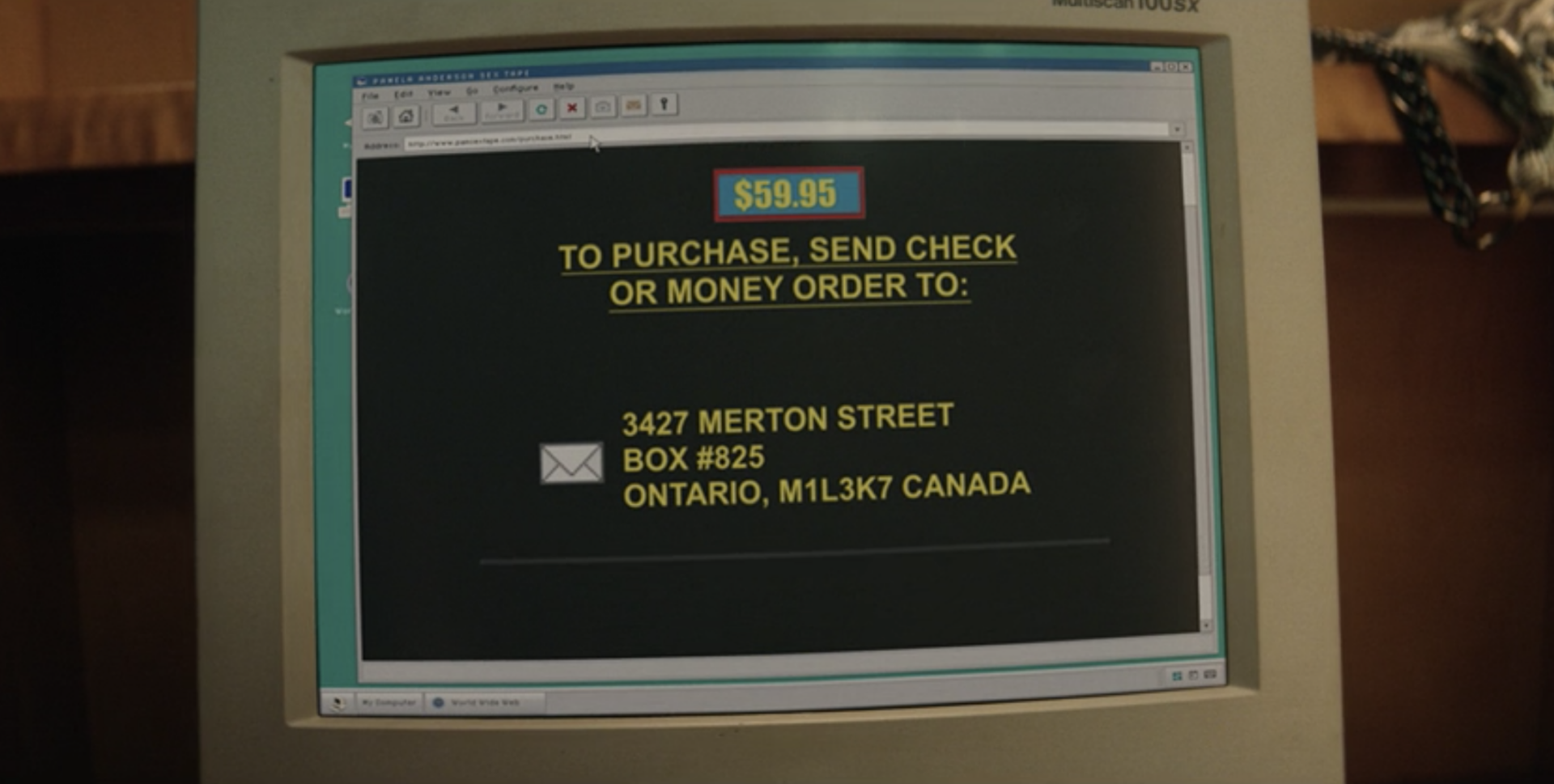 An Ontario address appears on the site to order the sex tape. (Disney+)

Lily’s Pamela then questions, “Canada? What? Maybe he’s running it through Canada to avoid getting caught?”

It’s hard to talk about ’90s popular culture without a mention of fellow Canadian Alanis Morissette‘s Jagged Little Pill. The 1995 album by the Ottawa native is still considered a classic to this day.

As Pamela’s career begins taking off, Tommy begins to feel at standstill — and tunes into MTV to pass the time. Alanis’ “You Oughta Know” — the lead single from Jagged Little Pill  — plays on screen. Tommy scowls slightly as he watches, then meanders down his hall looking at his own record sales from the 80s.

As he listens to Alanis, Sebastian’s Tommy is prompted to look back his record sales success with Mötley Crüe in the 80s. (Disney+)

Seth Rogen is a lead in the series, playing Tommy’s disgruntled electrician Rand Gauthier. Gauthier came to public notoriety after stealing and selling Pamela and Tommy’s sex tape, which he found by accident after taking their safe. The tape pre-dated Paris Hilton and Kim Kardashian’s, and was the first-ever marketed celebrity sex tape.

Rogen is, of course, a Vancouver native: the 39-year-old was born and raised in the Lower Mainland to a Canadian mom (Sandy Belogus) and American dad (Mark Rogen). He attended the Jewish elementary school Talmud Torah, later starting at Point Grey Secondary in Kerrisdale.

As a teen, he got his acting start by doing comedy at the local Yuk Yuk’s club. Seth dropped out of high school after getting a role in Judd Apatow’s Freaks & Geeks at 16, however, and relocated to Los Angeles.