I waded slowly into the shallow pool of Baywatch hoping a wave of dumbness wouldn’t plow me over and take me out to the sea of stupid where my remains would be eaten by sharks of boredom.

But sadly, I’m here to tell you, stay away from the shore!

Baywatch’s lifeguards originally ran – in slow motion of course – on the small screen from 1989 to 2001. And, believe it or not, there was a plot somewhere hidden in the story of scantily-clad California lifeguards who saved people from the dangerous surf and continuous criminal activity that always seemed to wash up onto their shores. 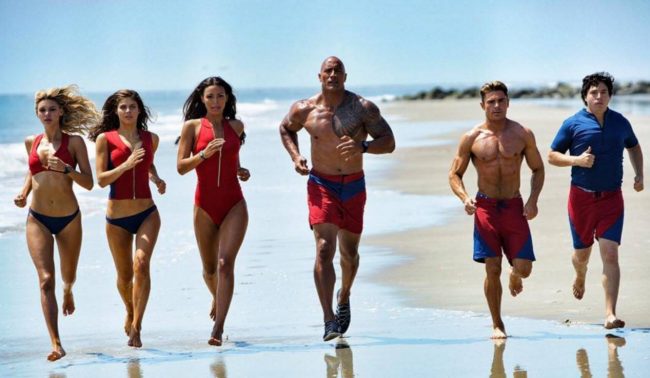 Fast forward to 2017 and thanks to the recent box office success of the 21 Jump Street film franchise, Hollywood has been rooting through the recesses of our minds trying to find more guilty pleasure television that they can turn into box office gold.

It was only a matter of time before they drudged up our love for an overly tanned David Hasselhoff and particularly busty Pamela Anderson, and breathed new life into the Baywatch format.

But sadly on the evidence of this film, they should have been left alone. 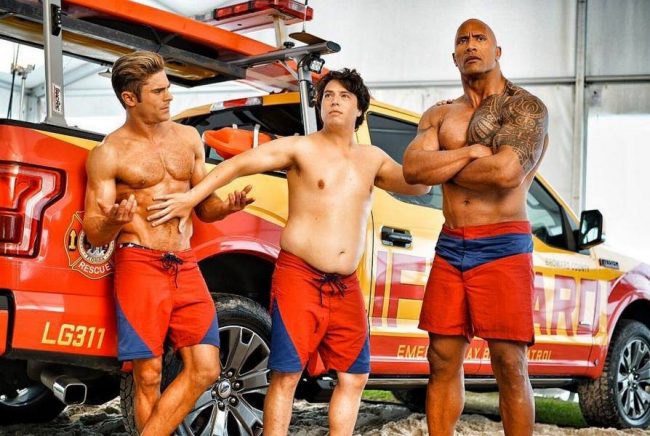 Seth Gordon, who did one of my favourite documentaries The King of Kong; was the man tasked with bringing the reboot to our screens, so I had reserved a tiny morsel of hope for the finished film.

That was until I realized that he has also made three entirely laughless films in the form of Four Christmases, Horrible Bosses, and Identity Theft. A rogue’s gallery to which you can now add Baywatch.

Now, I usually like a dumb comedy if it’s done well. But this is not one of them. Sure, Zac Efron and Dwayne Johnson pack enough box office muscle to entice some people into the water. But I’m telling you, I could smell what “The Rock” was cooking and it smelled like moldy cheese.

He’s not helped by an oddball cast that is as interesting as driftwood with the likes of Alexandra Daddario, Kelly Rohrbach, Jon Bass, Priyanka Chopra, and Hannibal Buress. No matter how much cleavage was shown in red bathing suits, or how many crude jokes were attempted, none of the actors had enough to be able to throw a lifeline to save this film.

Then there’s the script.

Baywatch is just wave after wave of terrible writing with jarring tone shifts. The slapstick comedy set-ups are obvious and unfunny, and we’re supposed to care about a lifeguard named Brody (Zac Efron) finally growing up or about some drug kingpin subplot.

In the States, this film was considered an R-rated comedy, here in Canada it’s something you’d see on late-night CBC.

Besides a few F-bombs and someone’s junk getting caught in a beach chair, there was no commitment to that restricted rating. That’s the thing, this film walks that awkward line of wanting to be taken seriously and also being truly absurd. But it achieves neither, and instead just floats in mediocrity with dick jokes flying at your face.

Buried beneath the lazy attempts at humour was a much better film. Instead, there was no clear vision and it seems nobody behind the scenes knew what they wanted this to be.

Let’s just call this what it is, a feeble attempt at a cash grab. The studio saw a formula that they thought worked, tried to piece that together, and it drowned.

The lesson we can learn from movies like this is that it’s hard to catch lightning in a bottle twice. The 21 Jump Street films were a success because of good writing and a great cast. You can’t just take any old dopey television show from our past, throw it on screen and expect nostalgia will win the day.

Stay away from Baywatch because it’s as bad as removing unwanted sand from your bathing suit.

This gets two soggy pieces of popcorn out of five.

This film is playing at a theatre near you, it’s rated R and is 116 minutes long