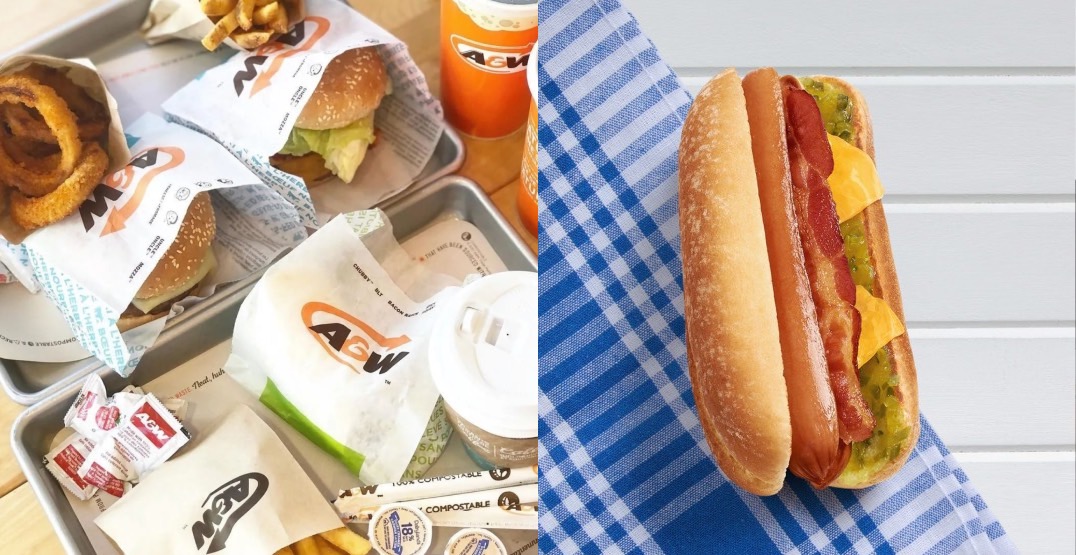 A&W just brought back its iconic Whistle Dog for a limited time only, and people are super excited about it.

Are fans of the hot dog that’s made with a toasted bun, topped with relish, real cheddar cheese, and bacon, so happy because it’s been a while since they’ve tried it, or simply because it really is that delicious?

Where would the Whistle Dog rank among the other incredible food items on the menu here?

We ranked the best food dishes at chains like The Keg, Earls Restaurant, Boston Pizza, and Cactus Club, and now it’s time to look at a fast food chain.

Many frequent guests have a go-to order here, knowing the menu inside and out, so a definitive ranking is bound to strike controversy, but that’s exactly what we’ve done.

Here are our picks for the best food items at A&W, ranked from worst to best:

Way too much meat for some, but the sheer audacity to have a mainstay burger on the menu with three patties deserves to be on the list. This thing is also topped with pickles, a slice of onion, ketchup, mustard, and Teen sauce.

This breakfast menu is possibly the best in the fast good game, and the breakfast sandwich is a key component of that. The Egger, served with cheese and your choice of bacon, sausage, or just cheese, comes with your choice of bun or English muffin. The freshly cracked eggs also come from hens that are fed on a vegetarian diet.

It’s available all day, by the way.

This pick is bound to ruffle a few feathers. People LOVE the Mozza Burger. But…

It’s just too close to the Teen Burger for us. It’s fantastic, we just prefer the icon, even though on paper this should be better. This is basically a Teen plus Mozzarella cheese, we just have to go with it even though it’s a close call.

The breakfast sandwich is the go-to choice at basically every fast food spot, but not necessarily at A&W.

The classic breakfast plate here, cooked to order on a flat top grill, is good enough to be found at any casual diner.

It’s back, but only for a limited time.

This popular hot dog is made with a toasted bun and topped with relish, real cheddar cheese, and bacon. The wiener is split right down the middle, with the bacon and cheese stuffed inside.

Get it while you still can!

Chubby Chicken made a limited-time comeback years ago and was so popular it just decided to stay.

The standard sandwich is great here, but the spicy habanero, battered and breaded with toasted wheat crumbs, wheat flour and spices, flavoured with cayenne pepper, jalapeño pepper, and habanero chilli, makes this a great example of A&W going above and beyond the norm.

The best onion rings in the fast good game? We think so.

That’s exactly why they rank so high on the list. Onion rings over fries are often an afterthought when considering “making it a meal,” but here, it’s expected.

What other fast food spot has its own iconic soft drink?

Without the float, this drink alone, served in a wonderfully frosted mug, would still make the list. Add vanilla ice cream to it and it places in the top three. It may even low-key be the best fast food dessert in the game.

Most spots have a cheaper, smaller version of the standard burger, but the relatively newly added Buddy to the burger family tastes as good as anything else on the menu.

For just a couple of bucks, the Buddy Burger is a beef patty topped with freshly grilled onions, ketchup, mustard, and Teen sauce, served on a soft and toasted bun.

And if it’s a little TOO small, just make it a double.

It’s possibly not just the best burger at A&W, but all fast food joints. Sure, there are fans of the Whopper and Big Mac, but this one feels like the foodie’s choice.

It’s actually quite simply put together, with a beef patty topped with real cheddar cheese, bacon from pork raised without the use of antibiotics, lettuce, onion, tomato, pickles, and Teen sauce, served on a toasted sesame seed bun.

Each ingredient used feels fresh from the grocery store and made to order, which can, at times, elude other restaurants like it. If you ordered a burger at any standard sit-down restaurant and the Teen showed up, it would still seem right.

The Teen is always fantastic, and that’s why it takes the top spot on this list.