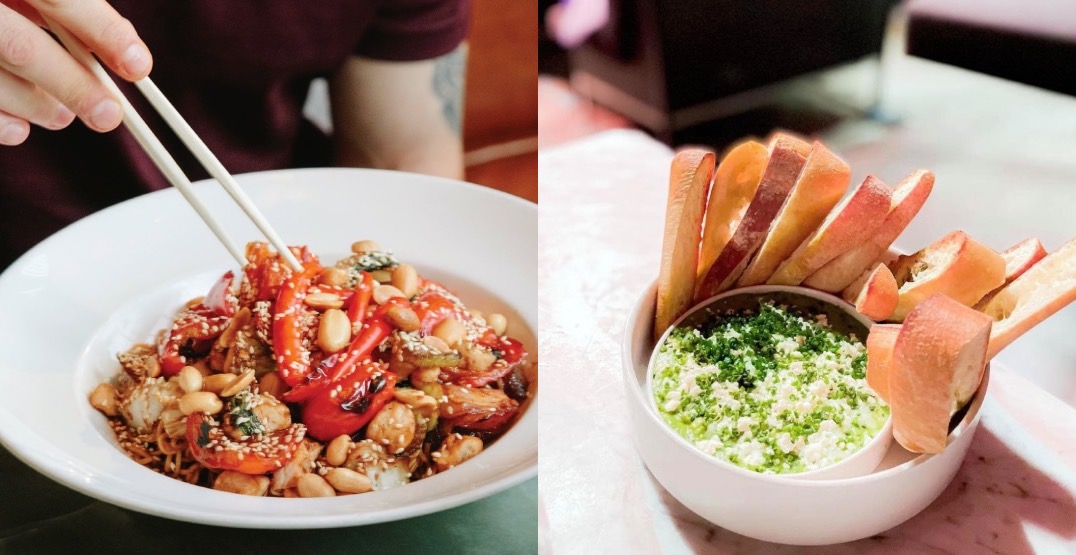 Do you have a favourite dish at Earls?

It’s been quite the heated debate deciding what were the best dishes at The Keg Steakhouse, so we decided to dive into the menu of another popular chain restaurant.

Earls has become one of the most popular go-to places for birthdays, graduation dinners, and business meetings. The menu is extensive, covering all types of dishes, including sushi, pizza, soup, sandwiches, bbq, bowls, and more.

So…what are the best dishes at Earls? What can you order that would have everyone else’s order beat? What is the go-to item you may not have ever tried?

We took a good hard look at the food and drink menu and narrowed all of the choices down.

Here are our picks for the best dinner dishes at Earls Kitchen and Bar, ranked from worst to best.

Maybe technically a cheat to put a non-food dish on the list, but we felt it was necessary. The Rhino lager and the Bellini at Earls are hugely popular, and this secret order combines both in one perfectly summery drink.

Although relatively low on this list, the burger here is fantastic. Topped with the standard bacon, tomatoes, onion, lettuce, pickles, mayonnaise, and mustard, everything is fresh and well done. There are just more things to get excited about here.

It’s necessary to have at least one vegan dish on a list like this. This tempura bowl is made with crispy tofu, tempura vegetables, cauliflower rice, ancient grains, roasted mushrooms, and sriracha mayo; it is as healthy as it is delicious.

Usually, a chain restaurant has an everyday soup, but rarely are they ever as good as the clam chowder as Earls. Made New England-style, this soup is filled with cream, chopped tomatoes, parsley, and hints of smoky bacon.

Yes, we included all of the fries.

The cajun chicken here is a massive hit among regulars, and so are the ribs that, surprisingly, many people don’t know about. They are always perfectly cooked with meat that falls right off the bone. Thankfully, there is the option to have both together, either as full orders or half.

Earls has fantastic pizza, and we’re not afraid to say it. The Margherita pizza is cooked in a forno oven and made even better when you get a parm dip with it. It’s only in the middle of this list because you can find great pizza elsewhere, but…this is possibly one of the best chain restaurant pizzas around — including pizza places.

A beef burger is a classic order at a restaurant like Earls, but sometimes it’s a chicken sandwich that you crave. These are much more hit and miss. The Cajun Chicken Cheddar Sandwich has been a staple on the menu for years, and we don’t see it going anywhere anytime soon.

What makes it so good isn’t just the blackened chicken and fresh vegetables, but the house-made bun it comes on.

Sushi good, tacos good, sushi tacos GREAT! Earls took a risk introducing sushi rolls to its menu back in the day, and now with many different types of rolls, that risk has paid off. Sushi tacos are a fun and tasty dish that shows why this growing chain remains one of the top spots.

Not all desserts would rate this high on a list of great dishes. In fact, many desserts are totally forgotten about most of the time. The sticky toffee pudding here, served with vanilla ice cream on a maple crumble, is a rich and decadent dessert that we never say no to after a meal.

Entering the top three, we have what is one of the most talked-about appetizers the second anyone mentions going to Earls. The recipe is simple: spinach, artichokes, creamy garlic, and chives. The texture and warm bread make this not just one of the best apps at Earls but any chain restaurant.

Putting a salad at #2 is highly controversial, and we understand that. But have you ever tried the Sante Fe Chicken Salad? If you had, you’d never question it. The mixture of blackened chicken and vibrant ingredients like feta, avocado, black beans, corn, and a peanut lime vinaigrette makes this salad such a balanced treat.

Pro tip: Add extra dates to this one.

Still one of the best-selling dishes at Earls, and for a good reason. It’s reached iconic status simply because it’s so unique and well made, having been perfected for over a decade.

So what’s in this Asian-inspired dish? Ginger soy sauce, wok-fried vegetables and noodles, and peanuts. have some fun with it by choosing your spice level, from one to six Hunan peppers.

Only the absolute bravest diners go for six.