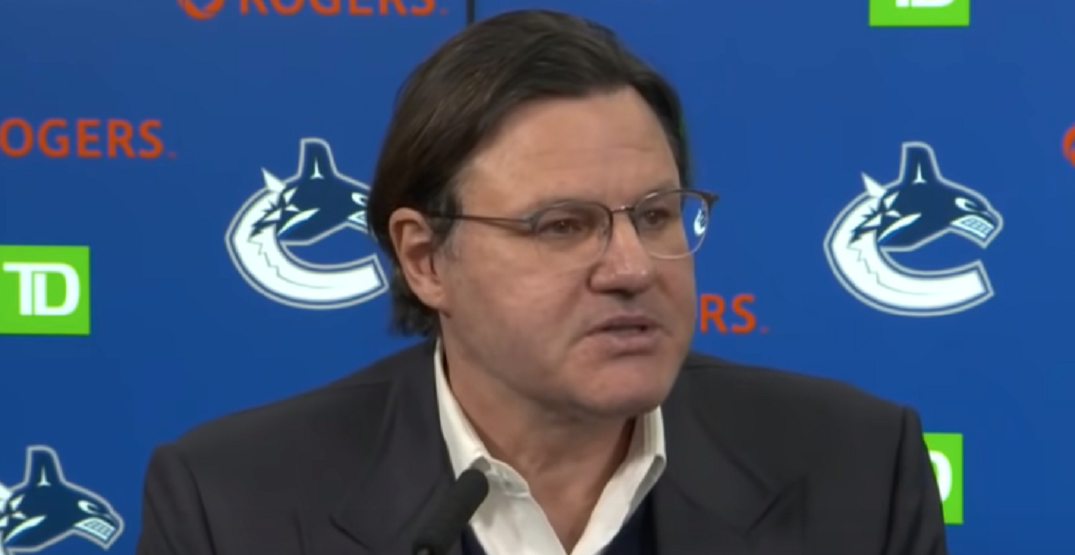 Throughout his entire reign in charge, Vancouver Canucks owner and chairman Francesco Aquilini has been known for being vocal about his team on social media.

He did take a bit of a hiatus earlier this season, but has been back to cheering the team on with their recent hot streak.

So on a Saturday evening where they weren’t on the NHL schedule, Aquilini decided to take to Twitter to, well, address media coverage of the Canucks.

Calling out “media in Vancouver” rather than anyone in particular, Aquilini asked why reporters were being critical of him two weeks ago, and again recently.

Aquilini’s tweet was just 51 words long, but the response speaks volumes about the years of disconnect between fans, media, and Canucks ownership.

There were a few common reactions to the tweet.

First, many figured they’d been “Booth’d”: aka a victim of a fake tweet from Twitter user @MrBooth07 who has been known to put out fake statements while pretending to be Aquilini by switching the appearance of his Twitter profile.

But once everyone took a deep breath and realized it was in fact the Canucks owner tweeting, few were quick to take his side, as Aquilini seemed to be making up a hypothetical argument to suit his own narrative.

It’s been a bit of a circus in Vancouver’s front office to say the least, so here’s a quick timeline of the last two weeks to catch you up to speed:

Sure, things have been on the upswing in the last two weeks since Aquilini decided to get active, as Vancouver is on a 3-0 streak since making the major changes of replacing Green and Benning.

But that doesn’t mean that Aquilini or the team should be immune to criticism.

Vancouver is still sitting seven points shy of a playoff spot, and there’s no guarantee that Aquilini’s new vision for the team will be a success in the long-term.

For a large portion of the Canucks fanbase (and media), criticism had been heavy on former general manager Jim Benning for many years, with it being a common question why Aquilini retained him in the role. Aquilini had frequently backed up Benning as recently as last month, saying that “Jim has a vision of how to build this team,” despite having missed the playoffs in five of the last six seasons.

Eventually, whether it was due to a jersey toss or otherwise, Aquilini caved to the pressure, letting go of both Benning and head coach Travis Green on the same day. Letting go of Benning was about as close to a slam-dunk move as Aquilini has had as of late, even if some felt it was a long time coming.

Step one was done: getting rid of a long-standing problem.

Step two is a little more complicated. When it comes to the actual hiring process of Rutherford and Boudreau itself, eyebrows were raised in the fan base and the media about how quickly they came into the organization.

In Monday’s press conference with Stan Smyl as his interim GM, Aquilini said he was undergoing a “thorough and exhaustive search” to find Benning’s replacement.

Three days later, Rutherford was introduced as president of hockey operations and the team’s second interim GM in less than three days.

John Shannon reported that Boudreau and Rutherford were the “two people” that Aquilini had targeted in the search that concluded in under a week.

The process of change in Vancouver began just over a week ago … with Aquilini meeting with Bruce Boudreau in person. At the time the owner targeted just two people, BB and Jim Rutherford, to change the fortunes of the Canucks.

But Rutherford’s got the keys to the organization for the time being, and the ability to hire the eventual permanent general manager. The future of the organization will largely be dictated by whatever Rutherford ends up doing, and the speed of his hiring seems to contradict Aquilini’s desire for a thorough search.

Rutherford hadn’t had the chance to meet Chris Gear and Jonathan Wall, who were both fired on Friday. TSN’s Farhan Lalji reported those decisions were made prior to Rutherford being brought in. It’s not hard to draw the conclusion it was likely a call that Aquilini had a say in.

Both Gear and Wall pre-dated Benning’s time in the front office, having served 11 and 23 years with the team in various roles, respectively. Perhaps Rutherford would’ve kept them around, perhaps not. But it sure sounds like it wasn’t his call, based on the timing. At best, it’s an oddly timed set of moves worthy of being questioned, although it seems like Aquilini has other opinions on the matter.

Gear himself said that his own goodbye statement that the chaos of the front office led him to be unsure about everyone else’s status, including Smyl’s.

It’s been pointed out to me that my statement today did not mention Stan Smyl.I have the utmost respect for Steamer,one of the greatest Canucks of all time.I wasn’t sure whether he would be staying on after the events of the week,so I sent my best wishes to others.Apologies Stan.

Smyl was quoted in the press release of Gear and Wall’s departure, but was not given a title. Officially, the Canucks now have him listed on their website as Senior Advisor to GM & Director, Player Development.

The Canucks may have new leadership, but if the last week has been any indication, Aqulini’s presence and rocky relationship with local media all but confirms things aren’t set to calm down in the Vancouver hockey market anytime soon.