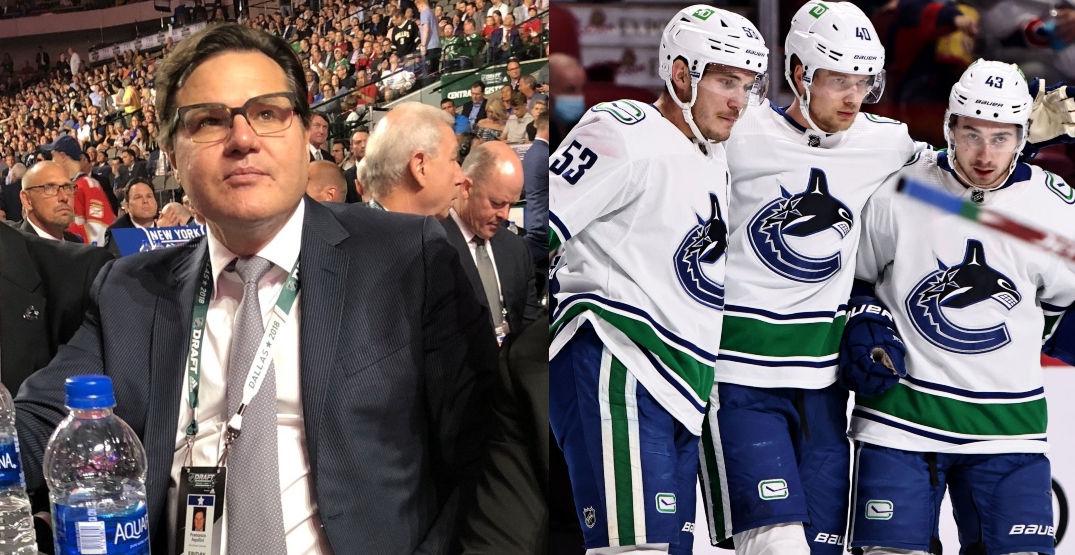 With his team in crisis, Francesco Aquilini has gone more than a calendar month, 34 days to be exact, without tweeting.

That’s unusual for the Vancouver Canucks billionaire owner, who last tweeted “frustrating night” following a 2-1 home loss to the Philadelphia Flyers on October 28.

You know what else hasn’t happened in a while? Snapshots.

When the Canucks were in crisis mode last season and rumours persisted that change could be coming to the team’s front office, Aquilini turned to Twitter.

“Of course I’m disappointed by our poor start, but the last thing we’re going to do is panic,” Aquilini said on February 13, when his team had a 6-11-0 record. “We’ve been better in recent games and I believe we’ll continue to improve.”

They didn’t improve, of course, going on to finish dead last in the North Division.

Aquilini on the #Canucks this year: "I feel very optimistic. I think this team is more indicative of what we saw in the bubble. Last year was a disappointment and we want to see a progression of what happened in the bubble."

Prior to this season, Aquilini said he felt the real version of his team was the team from the bubble in 2020, not last season.

The Canucks have the fourth-worst record in the NHL this season by points percentage, and many believe it’s a foregone conclusion that Jim Benning and Travis Green will lose their jobs because of it.

And yet, Aquilini has remained silent.

In fact, this is the longest gap in tweets from Aquilini since he became regularly active on the social media platform on December 21, 2016.

You have to wonder what Aquilini’s next tweet will be. Will it be thanking someone for their service to the organization, or does Benning have a lifetime contract we’re not aware of?

The Petey meet up

There are, however, many tweets about Aquilini.

This has to be it for management

Aquilini doesn’t do many media appearances, but he did speak with Sportsnet 650 prior to the Canucks’ home opener on October 13.

If he was clear in one area, it was that the team needed to make the playoffs this season.

I can’t imagine he’s happy with what he’s seen. And spoiler alert: they’re not making the playoffs this season.

Imagine if the Canucks did what the Habs just did

Instead of doing nothing like the Canucks, the Montreal Canadiens actually sprung into action and made changes to their front office.

Marc Bergevin was fired, and Jeff Gorton was hired as the executive vice president of hockey operations.

It’s a move that would have been applauded in Vancouver, as Gorton was arguably the best available executive out there. He was the guy in charge in New York when the Rangers wrote an open letter to fans less than four years ago to explain that they were rebuilding. The Rangers have a 13-4-3 record now.

Don’t you get the feeling that if the Canucks were in the same situation as the Habs, that everyone in the organization would have made excuses?

We just went to the Stanley Cup Final and we believe we’ll get through this.

If the Canucks could hang their hats on a five-week run in the bubble, imagine what they would have done after a lucky run to the Final?

It’s almost laughable that the Canucks haven’t done something yet.

That makes them a 70-point team, which is just one point better than Willie Desjardins’ worst season in Vancouver.

Green isn’t without blame either, and it’s hard to fathom a scenario where he keeps his job.

I wonder if Green feels like a goalie getting pumped in a blowout. He may not believe it’s his fault, but he must know the hook is coming.

Hard to do your job when you’re looking over your shoulder.

Braden Holtby has a .927 save percentage in 11 games with the Dallas Stars this season, and he did this on Tuesday night:

Braden Holtby. ARE YOU KIDDING!? pic.twitter.com/xvjq1Px05c

Do it for this goal alone…

Goal of the year for @abbycanucks so far!

It’s a little surprising the Canucks haven’t given Phil Di Giuseppe a shot yet. He has over 200 games of NHL experience, and has 11 points in 14 games in Abbotsford so far.

DeBrusk on the block

There are at least 12 teams interested in trading for Jake DeBrusk, according to TSN’s Darren Dreger, and the Canucks are one of them.

DeBrusk has a $3.675 million cap hit, and is a restricted free agent next summer. He averaged 40 points per season during his first three years in the league, but has just 20 points in 58 games over the past two seasons.

He’s only 25, so the Bruins forward fits with the Canucks age-wise.

DeBrusk doesn’t fit the Canucks well otherwise, as he doesn’t kill penalties and the team has bigger needs at centre and defence than they do on the wing.

Canucks fifth rounder Jacob Truscott is trying out for Team USA but is not expected to make the team. This is the result of trading away back-to-back first-round draft picks, not to mention a second-rounder in 2020, as well as third- and fourth-round picks in 2021.

Jannik Hansen has quickly become one of the best Canucks analysts out there.

Regularly appearing on Sportsnet 650, Hansen has not only proven that he’s up to date on the Canucks, but he’s been hard-hitting and passionate in his criticisms of the team.

Earlier on Sportsnet Today, Former Canuck Jannik Hansen shares his thoughts on whether this #Canucks group will be able to make a run this season. @Bik650 | @JamieDodd