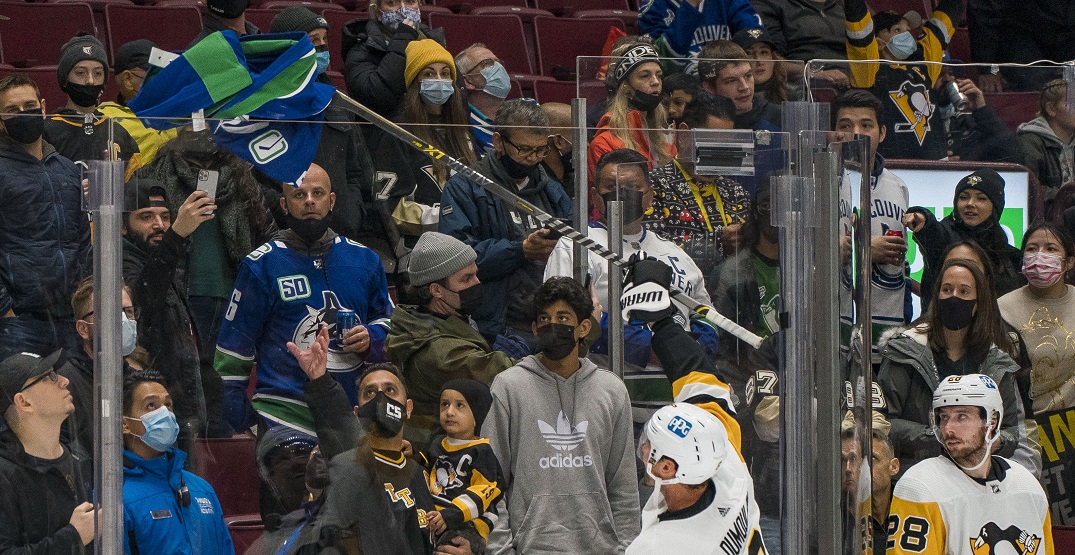 You can add a jersey toss to the Vancouver Canucks’ list of ways they’ve been embarrassed this season.

With the clock running out in a 4-1 Saturday night loss at Rogers Arena to the Pittsburgh Penguins, one Canucks fan decided to make their voice heard by throwing their Canucks jersey onto the ice.

Penguins defenseman Brian Dumoulin ended up being the one to retrieve what looked like a Bo Horvat jersey, playfully returning it to the crowd.

Someone threw a Canucks sweater onto the ice. Brian Dumoulin kindly returned it to the stands. pic.twitter.com/JNuxmRj3rY

Vancouver entered Saturday’s contest on a two-game win-streak, but any sign of building momentum was quickly shut down.

The Canucks are now 8-15-2 this season, and sit last in the eight-team Pacific Division. Per MoneyPuck.com, they’ve got just a 7.4% shot at the playoffs, and have gone just 3-7-1 on home ice.

“Fans want wins,” Horvat said postgame. “We’re not giving it to them.”

More than halfway through Saturday’s game, the Canucks still had a decent shot at winning. The score remained 1-1 until late in the second period, but Pittsburgh’s Jake Guentzel scored his second and third goals of the night on the power play to give the Penguins a lead they wouldn’t relinquish.

They were the 28th and 29th goals the Canucks have given up on the penalty kill this season, which has had a historically bad start to the year.

Canucks 64.6% penalty kill is the worst in NHL history through 25 games of a season

The Canucks are the second Canadian NHL team this week to see a jersey toss happen on home ice, after a Montreal Canadiens fan did the same during a loss Thursday night.

But while the jersey throw was the cherry on top of another frustrating loss for Canucks fans, most spectators in attendance used another method to protest — their voice. And it’s likely that general manager Jim Benning heard them.

Scattered “Fire Benning” chants could be heard throughout the arena.

The protest chants continued in the Rogers Arena concourse postgame, with some fans starting a “Sell The Team” cheer.

#SellTheTeam chants in the concourse. 🗣

“We heard the frustration from the fans tonight,” Canucks winger Tyler Motte said. “We do owe it to more people than just ourselves to put a better product together.”

The Canucks next play at home tomorrow night at 7 pm against the Los Angeles Kings, their second of six consecutive games at home.