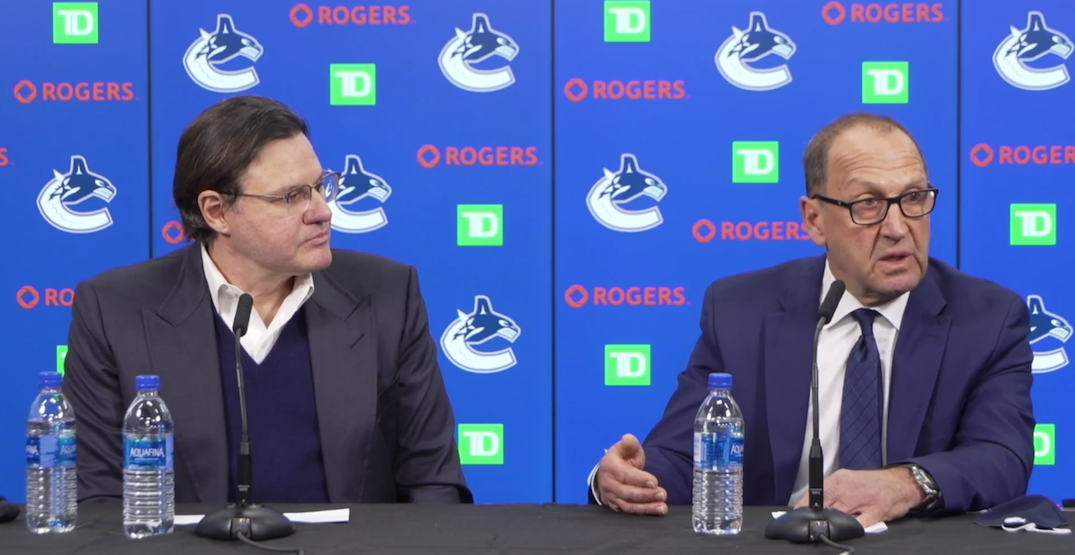 As boos (and a jersey) rained down from the stands, with Canucks fans calling for change during a 4-1 loss Saturday night at Rogers Arena, Stan Smyl was sitting there watching and listening.

Smyl played 896 games for the Canucks. A heart and soul player, he was a team captain and has his number hanging from the rafters. He’s been involved in coaching or management with the organization for over 30 years.

He said it was hard to watch.

“The end of that game was difficult. Just hearing the fans,” Smyl said. “That’s when I felt ‘I have to get involved here a lot more’ and express my views a little stronger. At the end of the day, we’re all responsible — from the players to the management, to the coaches, to the ownership. And we’ve got to make it better. I think we’ve taken a step back in the direction we want to go. We’ve got to put that game plan together and follow through with it.”

Smyl said he felt the players were “waiting for something to happen” and that finger pointing had begun in management. His team is off the rails, so Steamer is stepping up.

The 63-year-old was named interim general manager on Sunday, but don’t expect him to be a puppet for ownership. He cares too much to be that.

“When I talked to Francesco [about] the position, I told him that I don’t want to be just sitting there watching. I’m going to present things to you. I’m going to be evaluating players. Seeing how the team is going down the road the next three to four weeks, and then make the decisions as we move forward.”

“I’m going to push Francesco. I think if there’s something to be had that’s going to help this organization, I will talk to Francesco. I will push him on it.”

Francesco Aquilini doesn’t look comfortable in media conferences, and Smyl doesn’t have a ton of recent experience with them either. But Smyl put the team on his back in this presser. Sitting next to the billionaire owner in his first media conference in his new role, Smyl’s passion for the team was obvious.

“I will always do what’s best for this organization. I will always step up when asked to help. Bottom line, our performance this season has not been good enough. We do have some talented young players and a good core to build around. But we need to be better… There is pride in wearing this Canuck jersey. There is also a huge responsibility that comes with pulling on that jersey… It’s an honour to be sitting here today. This opportunity and responsibility means the world to me, and I will work extremely hard to get this team back on track.”

Eventually a new general manager will be hired, and Aquilini hinted that a president of hockey operations could be brought in also. Smyl, it appears, will help in the selection.

Whoever they pick, it’s clear that Smyl hated the way the team played under Jim Benning and Travis Green this season.

“To get out of it, it’s not just going to be one individual. It’s going to take a team and they’ve got to come back to being a team, and make it hard to play against. That’s the identity I want for this organization, to be hard to play against. If I’m lining up against you, I’m going to make it as miserable as possible. That was my message to Francesco. I talked to the players about that this morning. I think that’s an important area and that’s an area we’ve got to start in.”

Smyl wasn’t someone that many people were expecting much from in this role, so his passion and honesty was a nice surprise. He’s been with the team for over 40 years, but judging by the reaction from fans on social media, the Steamer just became a fan favourite with a whole new generation of fans.

If you needed a reminder: Stan Smyl is a BAD ASS.

Smyl was blunt, honest and clear. Something that has been missing for the past 8 years.

Aquilini did perfectly fine as well. He doesn't need to hide from the media.

They need to back up the words now,

Steamer is such a welcome public voice after what we’ve heard from Jim the last 8yrs.