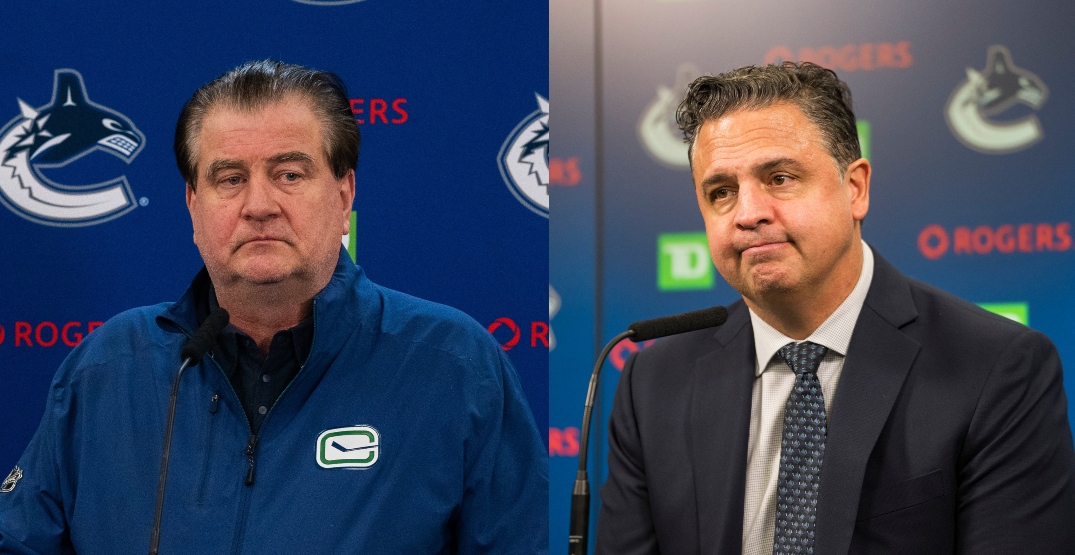 A day after a jersey was tossed onto the ice at Rogers Arena in protest, the Vancouver Canucks have fired Jim Benning as general manager. Going with him are assistant GM John Weisbrod, head coach Travis Green, and assistant coach Nolan Baumgartner, the team announced in a Sunday night media release

“First, I want to sincerely thank Jim, John, Travis and Nolan for their passion and dedication to the organization and our community,” said Canucks owner Francesco Aquilini. “We are grateful for everything they have done for the Canucks during their tenure, and we wish them nothing but success in the future.

“These are difficult decisions, but we believed we would have a competitive group this year. As a result, I’m extremely disappointed in how the team has performed so far. I’m making these changes because we want to build a team that competes for championships and it’s time for new leadership to help take us there.

Bruce Boudreau has been hired as Green’s replacement, with Scott Walker serving as assistant coach.

A search for new “hockey operations leadership” is underway the Canucks announced in a media release. In the meantime, Stan Smyl will serve as the team’s interim general manager, while Ryan Johnson has been named interim assistant GM.

“Our search for new leadership is underway,” Aquilini added. “In the interim, Stan Smyl will lead our Hockey Operations team with the strong support of Ryan Johnson, Chris Gear, Daniel and Henrik Sedin, Doug Jarvis and others on the team to ensure day-to-day continuity. Stan has been a very loyal and committed member of our Hockey Operations Senior Management structure for many years and is someone whose experience and leadership we value greatly.

“I am excited to add Bruce Boudreau as our new Head Coach, and Scott as Assistant. Bruce is one of the most experienced coaches in the NHL, with nearly 1,000 games behind the bench and a successful track record working with some of the game’s best talent. Scott is a young coach with an excellent reputation who will fit in very well with our group.”

Aquilini and Smyl will speak to the media tomorrow afternoon, followed by Boudreau — who will presumably be behind the bench that night for the Canucks’ game against the Los Angeles Kings.