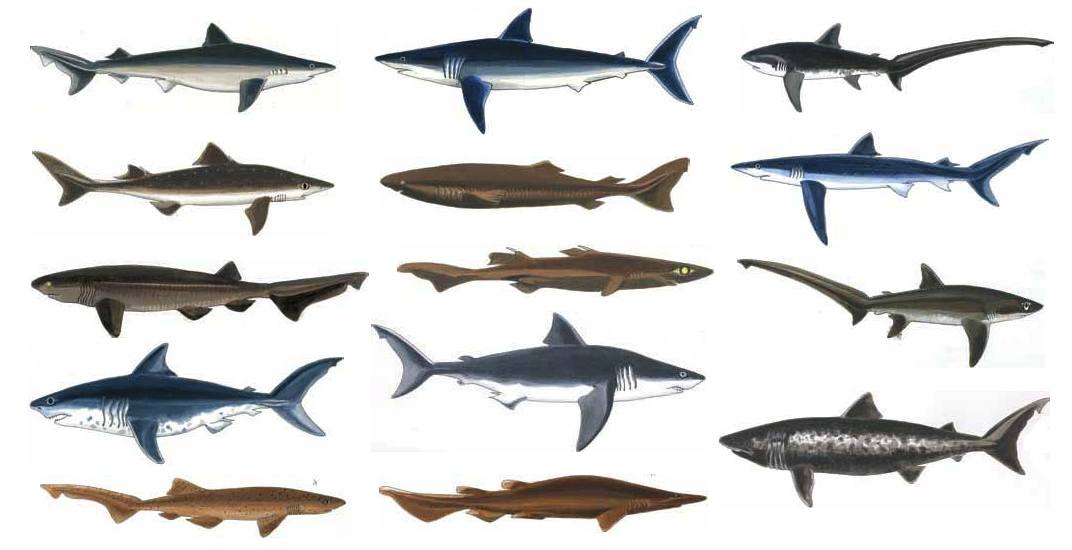 All 14 species of sharks found in the coastal waters of British Columbia. This diagram is not to scale. (Department of Fisheries and Oceans Canada / Daily Hive composite)

After a small, essentially harmless shark – believed to be a adult Pacific Spiny Dogfish – was spotted poking its fin above the water line at Kitsilano Beach this week, the question some are asking is what species of sharks live in the coastal waters of British Columbia?

There are, in fact, quite a few.

According to William Cheung, an associate professor at the UBC Institute for the Oceans and Fisheries, a total of 14 species of shark can be found the province’s ocean waters.

Seven species are classified as common by the federal government’s Department of Fisheries and Oceans Canada, such as the Sixgill and Sevengill sharks, the large Salmon Shark, and the Pacific Spiny Dogfish Shark, which is one of the most common sharks in the world and uniquely produces venom on its fins.

As for the other seven species, they are deemed to be rare in this part of the world, although they are occasionally spotted. This includes the Great White shark, particularly during the warmer season.

But sightings of the Great White, an apex predator that can reach 19 ft, could become much more common over the next few decades.

He expects sharks to venture further north from California due to global warming, and eventually they could call BC’s waters home.

“We found that climate change will cause an expansion of the range of great white shark to northern temperature areas, including the offshore waters of the northeast Pacific, which includes BC,” he added.

In the meantime, here is a breakdown of the 14 species of sharks that can currently be found in coastal British Columbia:

Description: Short, heavy body; short snout; black or dark grey on the top; abrupt change to white blotches below; two horizontal keels just prior to tail fin; awl-like teeth with small sharp denticles on each shoulder of the main point. It is one of the largest species of sharks immediately off the coast of BC, and its shape is similar to a small Great White Shark. 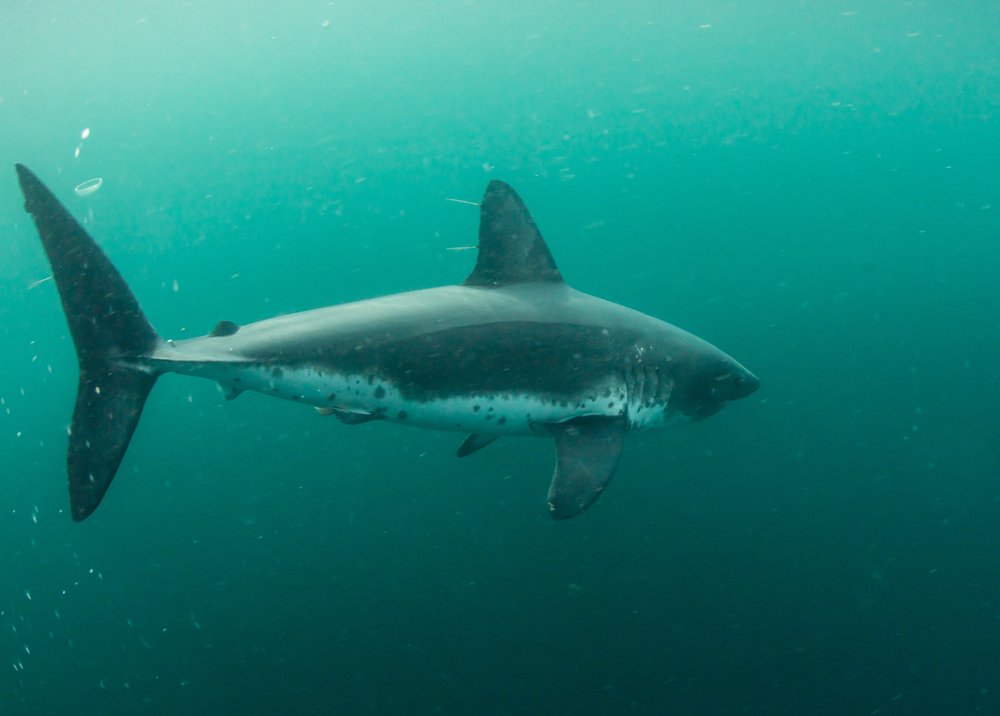 Description: Dark indigo blue on back shading through clear bright blue on sides to white below; notable for the long sabre-like pectoral fin; well developed snout; slender body form. They are found in most of the world’s ocean area, within temperate and tropical waters.

Found in depths: Surface to 800 ft

Description: Blackish brown all over or slate green with darker streak-like mottling; short caudal peduncle (narrow part of a fish’s body to which the caudal or tail fin is attached). This species eats their prey by either suction and inhalation with their massive mouths or their cut them up with their teeth like most other sharks.

Description: Light or medium brown; dark margins on fins; first dorsal fin has posterior position over pelvic fin; two dorsal fins of equal size. They live in deep waters, as deep as 2000 ft, and usually in areas of ocean that are muddy or sandy. 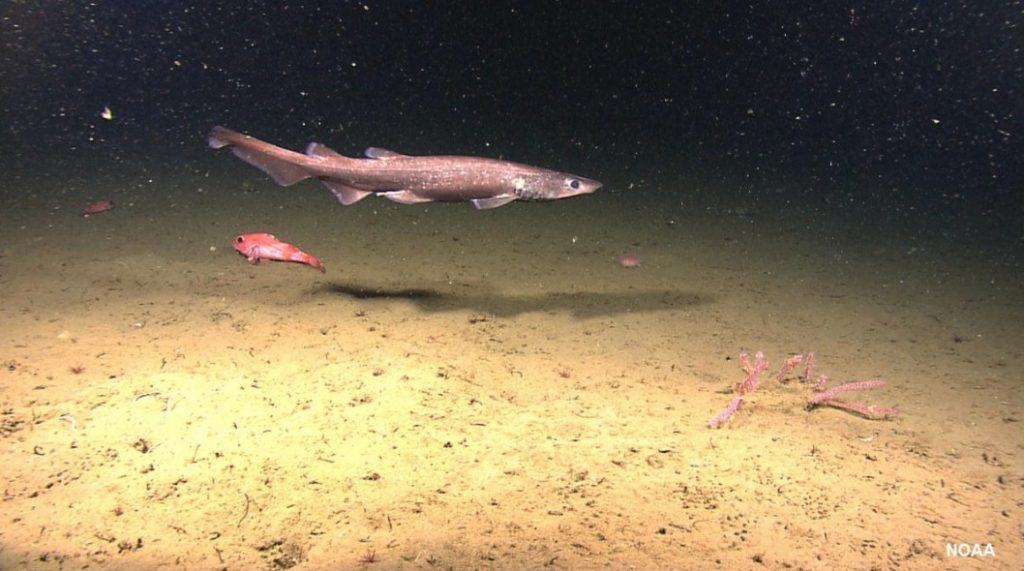 Description: Dark brown or grey on top, nearly black in some specimens, somewhat paler below; six gill slits on each side, all long; two rows of teeth, moderate-sized in upper jaw, larger in lower jaw. The species is found on sections of coastlines of every continent, within the outer continental shelf, except Antartica. Possible concern for the species to be at risk. 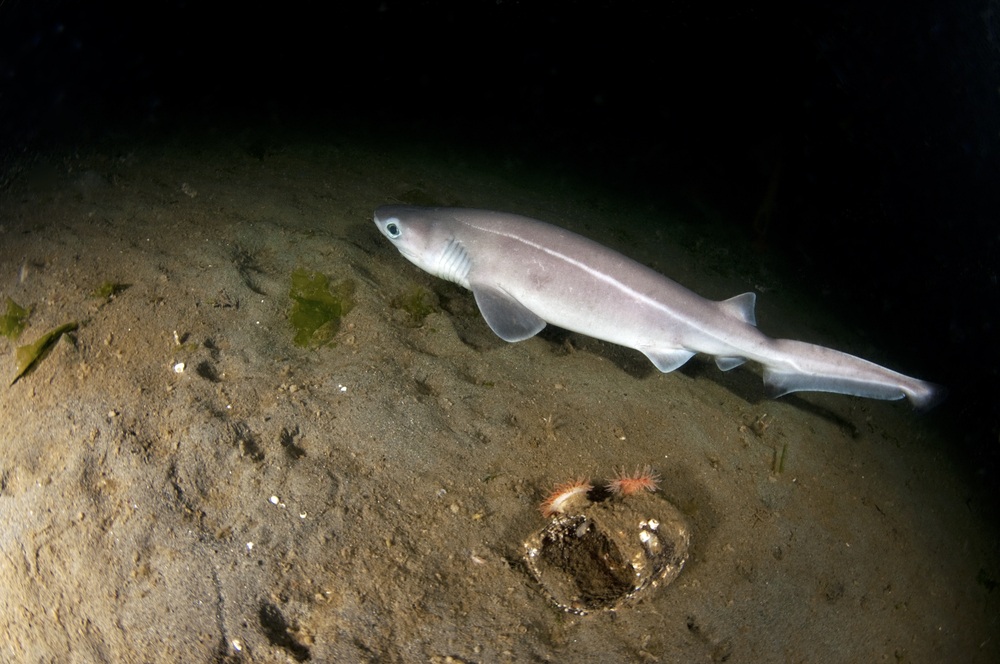 Description: Sandy grey to reddish brown, with scattered round black spots; seven gill slits on each side; in upper jaw most teeth have one dominating cusp curved inward. Teeth in lower jaw have a series of cusps. It has a large, thick body, and its head is broad with a blunt snout. The species is potentially dangerous to humans if provoked.

Description: Dark brown or blackish body, underside is darker; black mark above pelvic fins; short tail; short fins; spine prior to each dorsal fin. This species has distinct large green eyes, with short tail and fins and a spine before each dorsal fin.

Diet: Mackerel, herring, squid, and other various small and large species of fish

Description: Brownish on top, creamy white below. Upper caudal fin nearly as long as rest of shark, notched or helmeted contour of head. Huge eyes extending onto dorsal surface of head. They use their long tails to stun their prey before feeding.

Description: Slate brown or grey to almost black on top, shading to dirty white below; crescent-shaped tail fin; triangular serrated teeth. They are one of the top apex predators of the ocean, swimming at speeds of up to 56 km/hr to catch their prey.