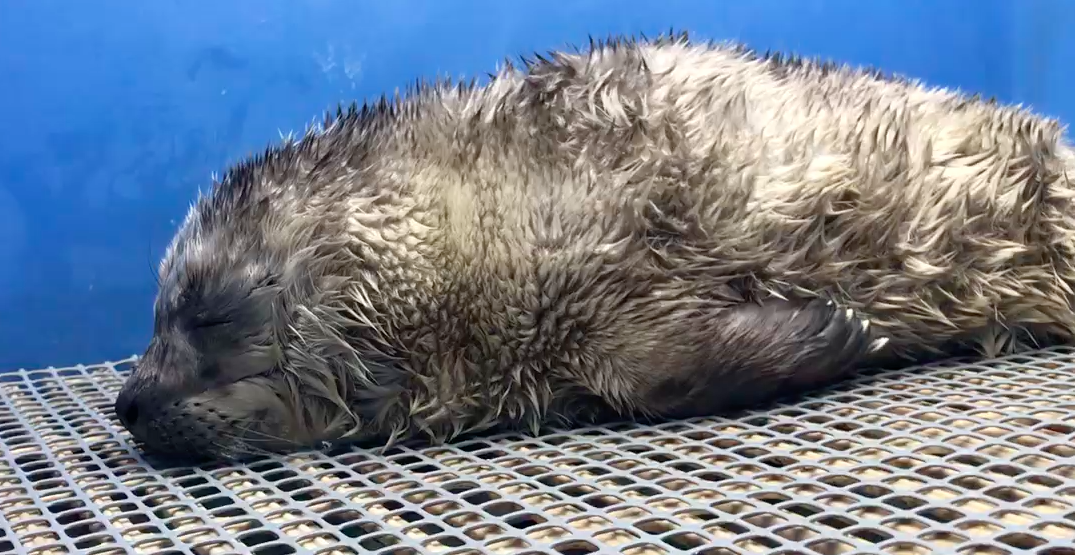 It’s touch-and-go for the first seal pup patient of the year at the Vancouver Aquarium Marine Mammal Rescue Centre: a tiny premature male, admitted yesterday, May 23, after being found alone on Anvil Island in Howe Sound by a member of the public.

The pup has been named Emerald, after the birthstone for the month of May. This year’s naming theme for harbour seal pups is gemstones and minerals.

At just 6.8 kg, Emerald is very underweight, has remnants of his umbilical cord still attached, and is covered in the soft fur of a premature pup (called lanugo).

The pup was observed alone throughout the day on Wednesday, with no adult seals in the area, before the decision was made to rescue him.

Lindsaye Akhurst, manager of the Aquarium’s Rescue Centre said the team is always cautious about taking action in a case like like this.

“This is the start of pupping season along our coast, so at this time of year, you’ll sometimes see newborn pups left to rest while their mothers forage for food,” said Akhurst. “The mother will usually come back.”

However, that was not the case in this particular situation and after being transported by boat to Porteau Cove, Emerald was taken to the Rescue Centre by the team, where he is now receiving a nutrient-rich formula five times per day and close monitoring by the veterinary team.

Akhurst said his condition is still critical. “It’s always a more challenging recovery for premature pups,” she explained. “They miss important early nutrition and support from mom, so they’re not off to a great start.”

Members of the public are invited to symbolically “adopt” a seal pup online, which will help which will help fund the ongoing rehabilitation efforts of the Vancouver Aquarium Marine Mammal Rescue Centre, which rescues and releases about 150 animals each year.

While most of the patients are harbour seal pups, the veterinary team has provided medical treatment to elephant seals, sea otters, sea lions, whales, dolphins and porpoises, most of which are successfully released back into the wild.

Last year, the team rescued more than 200 seal pups, three sea lions, a northern fur seal, and a sea otter pup. The goal for every rescued marine mammal is to treat, rehabilitate, and return it to the wild as soon as possible.

Akhurst also has some advice for those who may encounter a seal pup alone in the wild.

“We ask those who find a seal pup not to touch it and to keep their pets away,” she said. “Call us, we’ll assess the animal, then decide if a rescue is needed.”