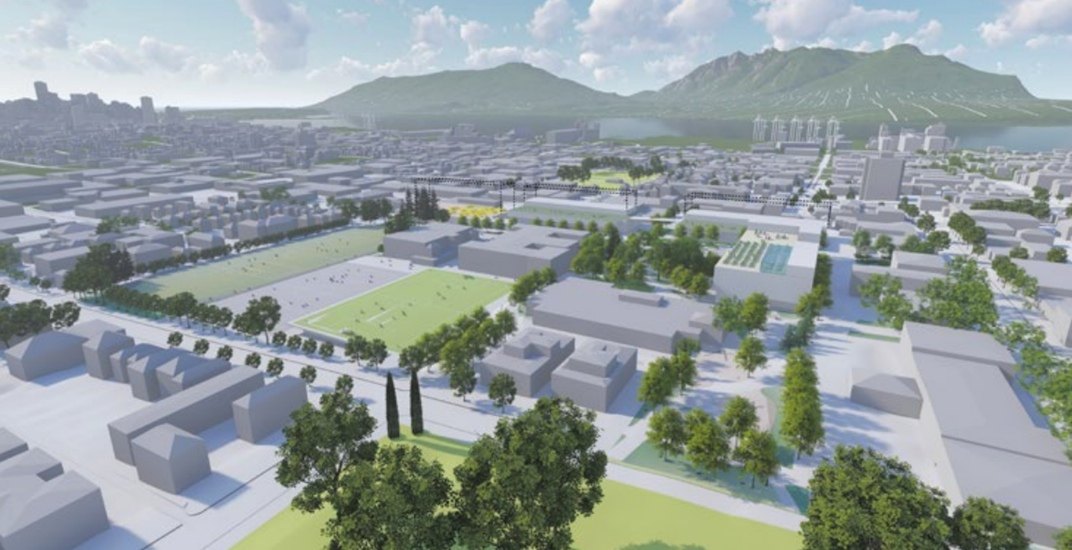 Huge proposed changes for the Britannia site in East Vancouver have been green-lighted to an advanced planning stage.

Britannia Community Services Centre and the larger Britannia school site will be largely redeveloped with new and enhanced public spaces, community and recreational facilities, cultural spaces, and even non-market housing. This will benefit both the elementary and high schools on the site and the community-at-large. 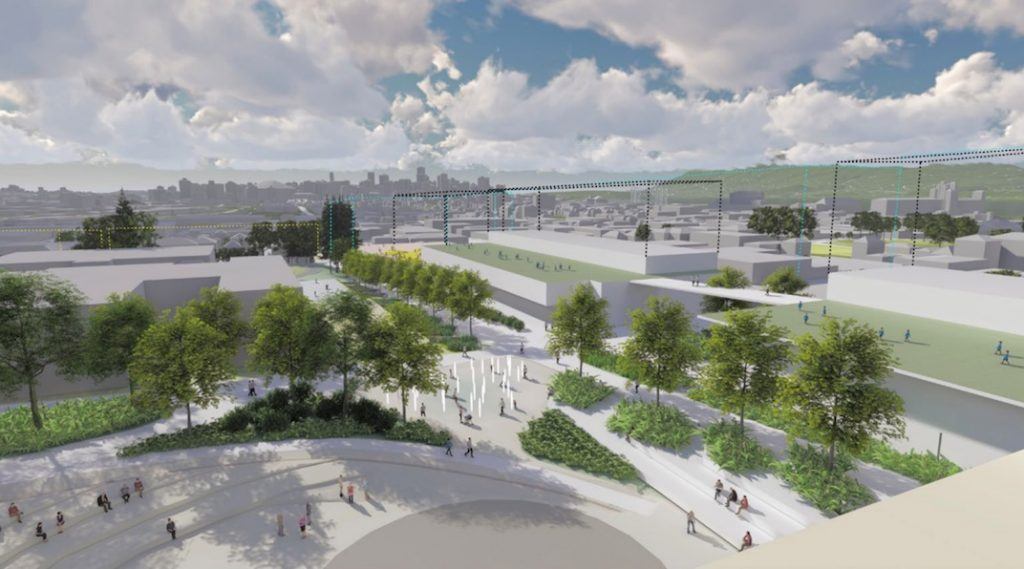 Yesterday, Vancouver City Council approved the master plan for the renewal of the 18-acre site, which is described by city staff as a project that is modelled after a “university type of campus environment.”

It will replace most of the 1976-built facilities over a three-phase project built over a timeline of 10 to 20 years. Multiple municipal governmental entities are involved in the project, including City Hall, Vancouver Park Board, and the Vancouver School Board. 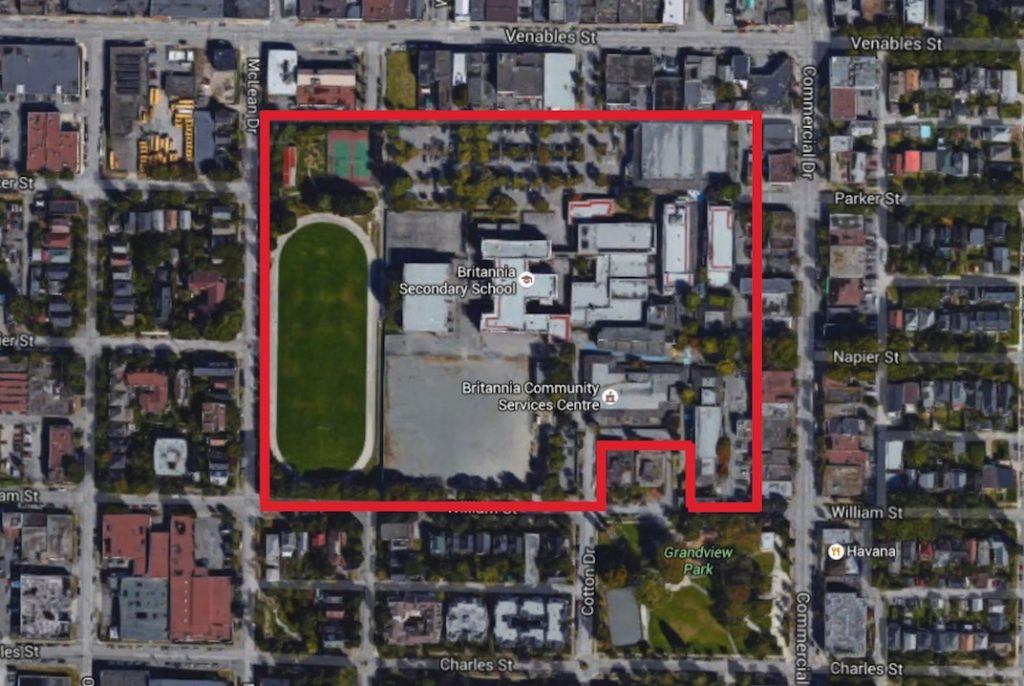 Existing site of Britannia in East Vancouver. (City of Vancouver) 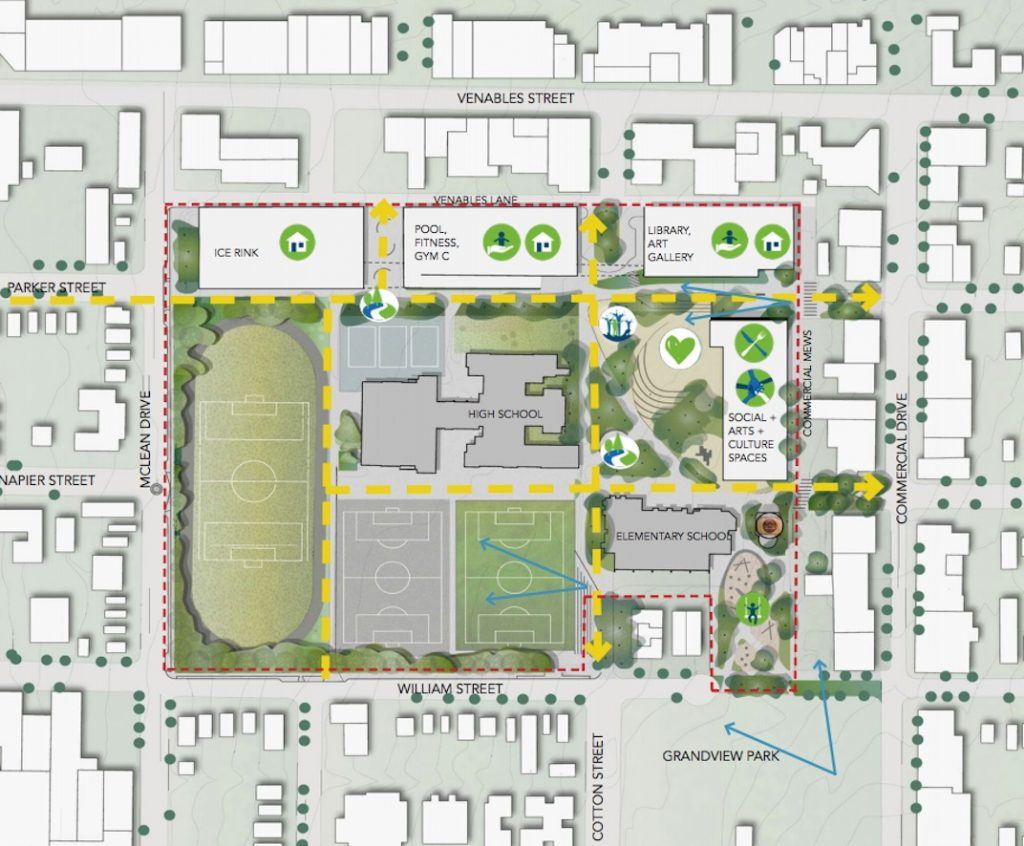 The first phase entails a new aquatic centre, gymnasium, and other fitness spaces on existing surface parking next along the site’s northern perimeter near Venables Street. Preliminary concepts identified by the Vancouver Park Board indicate this new “Community Plus Pool,” short of being a major “destination” level facility, could include eight 25-metre lanes, a leisure pool with lazy river, and hydrotherapy pool.

This will be followed by the second phase of a new ice rink to the west of the aquatic centre and a third phase with a new library, cultural spaces, and food hub.

An unspecified number of non-market housing units will be built over these community and recreational uses. Childcare facilities are also incorporated into the rooftop of the lower podiums of two buildings. 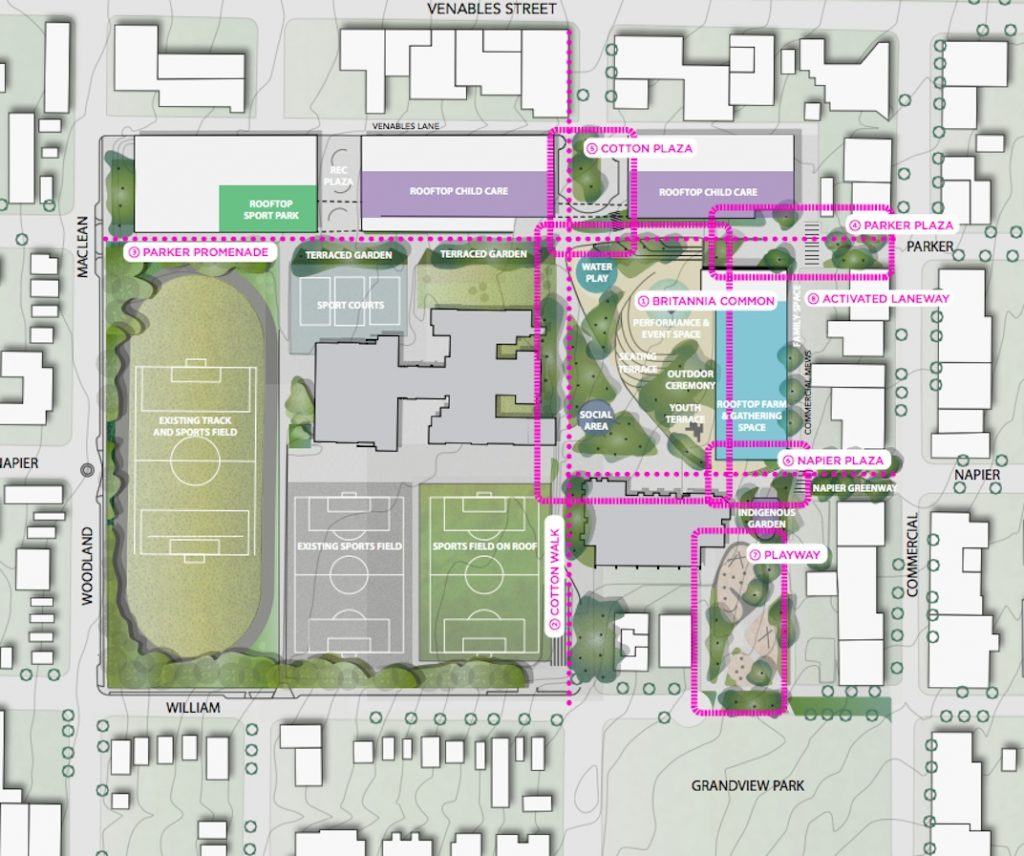 Additionally, the high school’s shops area will be tucked into a new building with a rooftop sports field.

Extensive public realm improvements to the Britannia site include east-to-west parks and promenades on the northern half of the site and a new north-to-south ‘Play Way’ that establishes connections to the adjacent Grandview Park located south of the site. 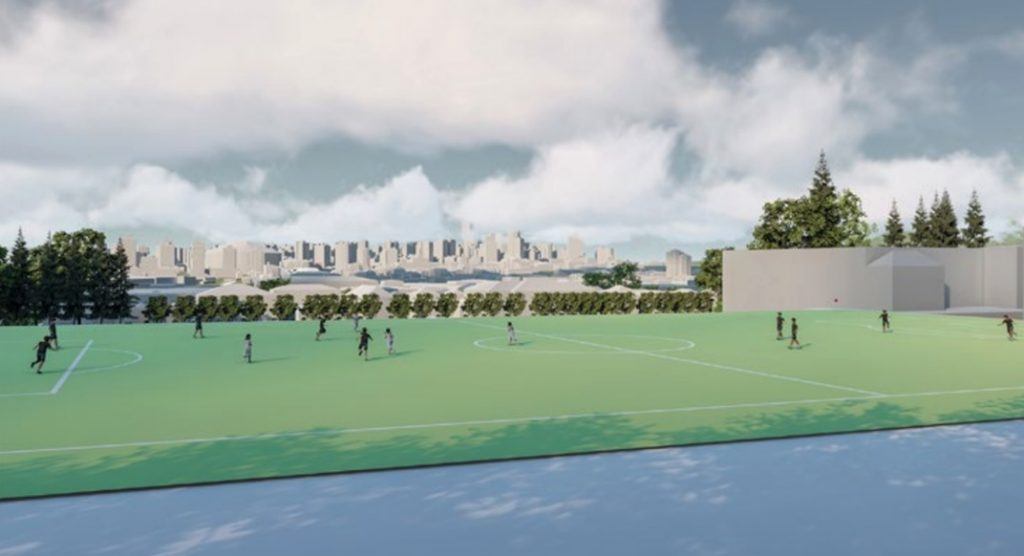 If built as planned, this will be one of Vancouver’s largest investments in new community and recreational infrastructure.

Its total cost, in 2018 dollars, is estimated to range between $410 million and $490 million, including up to $280 million for community facilities, $25 million for childcare, $130 million for non-market housing, and $55 million for public realm upgrades such as landscaping for new parks and greenways.

The proposed funding sources for the project include community amenity contributions and development cost levies from neighbourhood developments, an allocation of the municipal property tax fund, and federal and provincial government funding.

With the master plan’s approval, the site could undergo the necessary rezoning in 2019, and detailed design would follow starting in 2020.

Britannia Secondary School was on the brink permanent closure earlier in the decade, as the School Board initially included the school in its list of closures. This closure was cancelled in 2016.