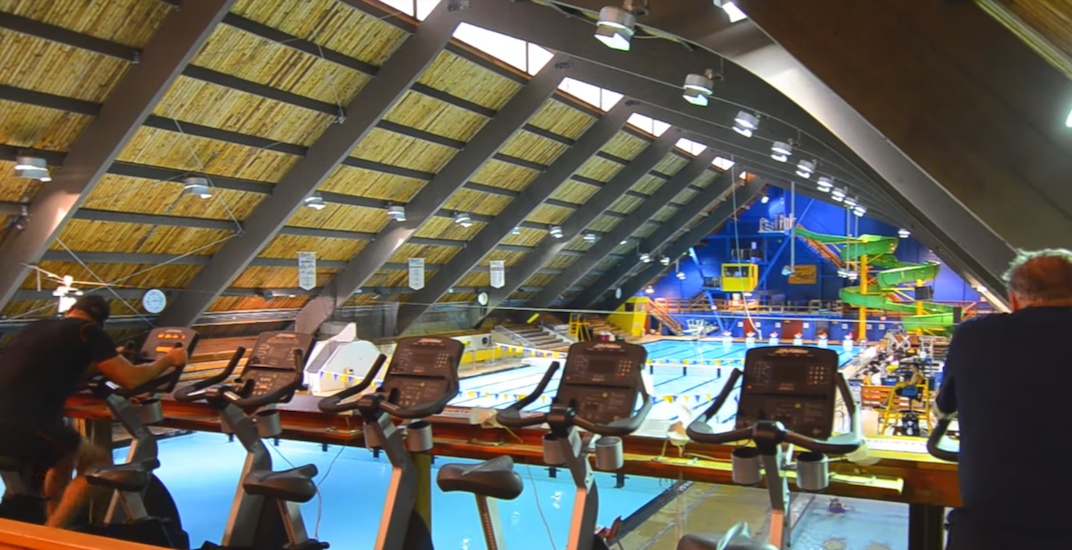 Inside the existing Canada Games Pool. (City of New Westminster)

Some of Metro Vancouver’s oldest and largest recreational facilities could be demolished and replaced in a $100-million plan.

The City of New Westminster is exploring building a new community and aquatics centre complex that will replace both the Canada Games Pool (CGP) and the Centennial Community Centre (CCC), built in 1972 and 1967, respectively.

Both facilities are aging and no longer meet modern recreational standards and the demand of New Westminster’s growing population, which is anticipated to rise from 71,000 today to about 100,000 by 2045.

And due to the poor condition and antiquated nature of the facilities, it is estimated that there are 100,000 fewer annual visits at the existing pool than prior to 2010, despite population growth.

The renewal plan involves demolishing both facilities and constructing a new, larger pool and community centre – built to a LEED Gold environmental standard – on the same site at a cost of approximately $100 million. There are no plans to demolish the adjacent 1965-built Royal City Curling Club. 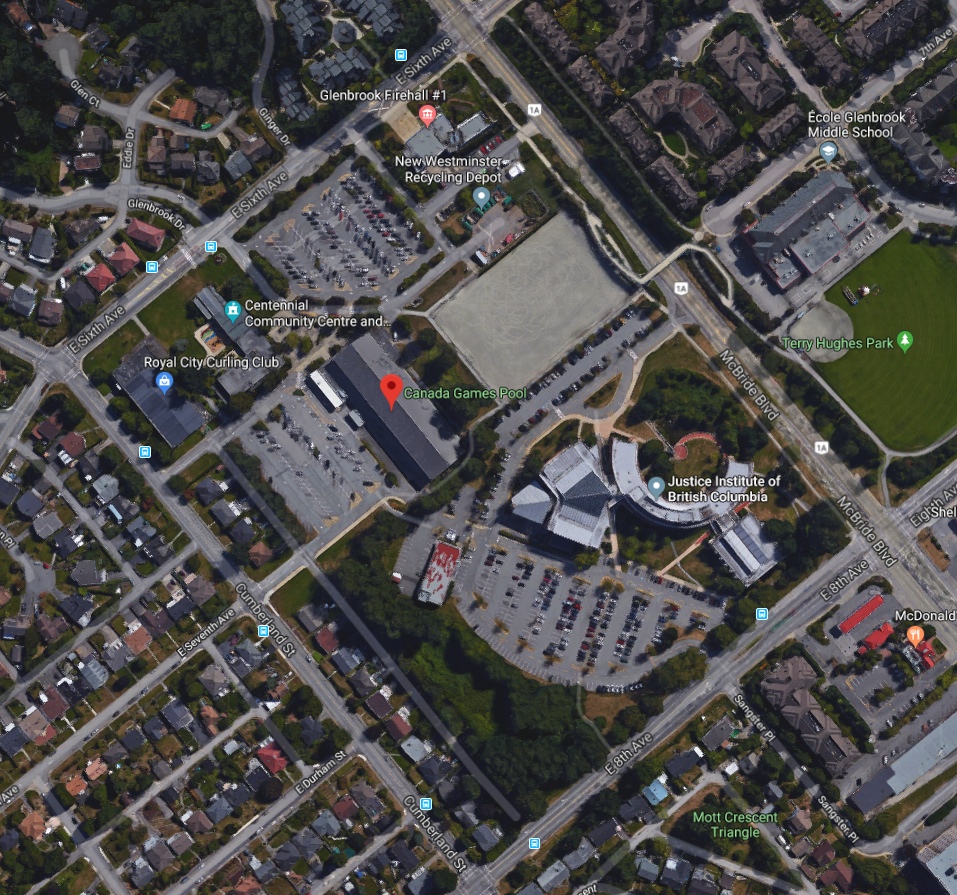 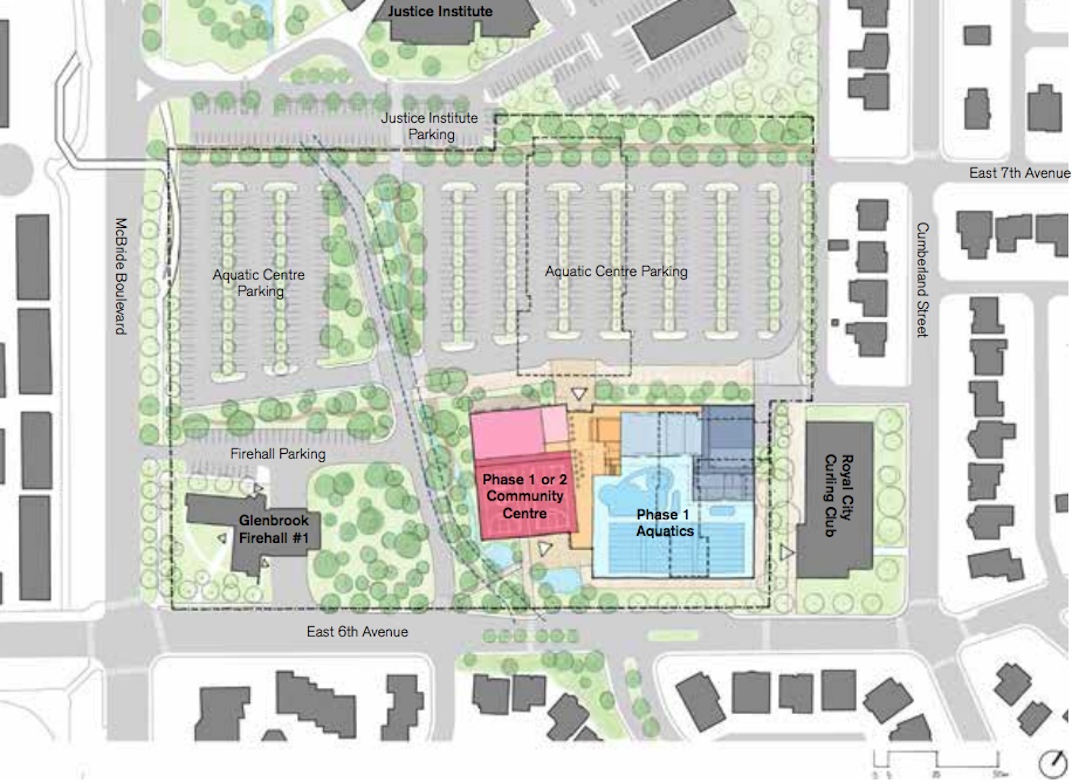 The proposal calls for a 20,323-sq-ft leisure pool area consisting of a 450-person capacity leisure pool, two hot tubs with a combined capacity for 40 people, and sauna and steam rooms.

Elements of the competitive training facility at the existing facility will be retained with a 50-metre length pool with eight lanes, which would be identical to the current pool’s size. Moveable bulk heads will allow varying synchronous programming to balance public uses and lessons and competitive swim uses.

But tall international-level diving platforms will not be included; the pool will only have one-metre and three-metre springboards due to the shallower pool depth.

A variety of washroom facilities will be provided, including a large universal change room to supplement separate traditional male and female changing rooms. 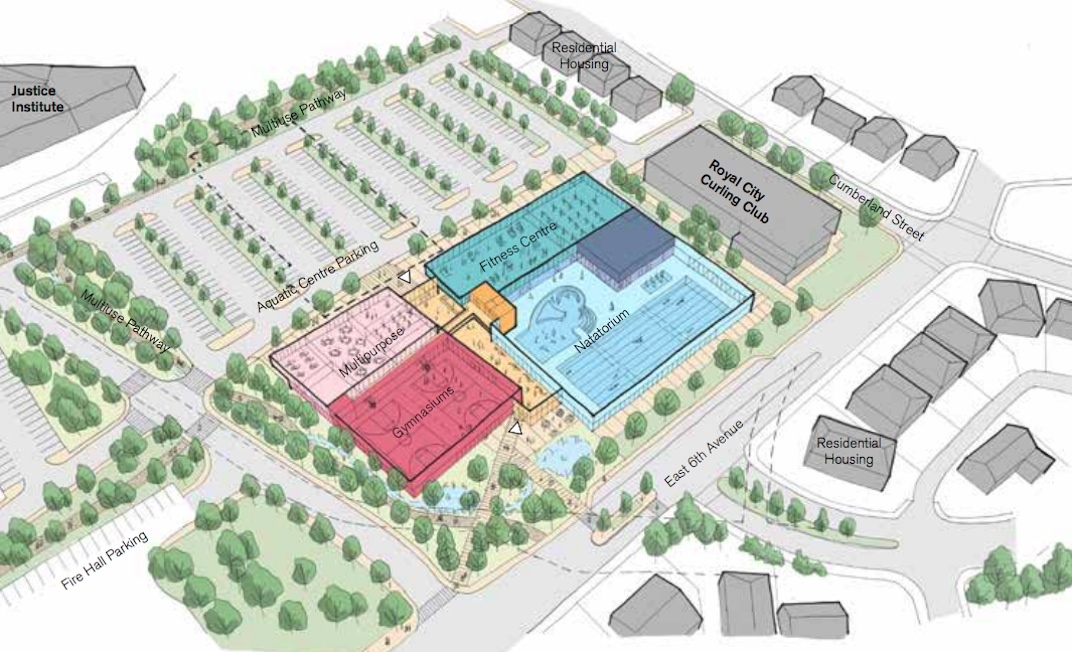 There will be a 21,268-sq-ft Enhanced Fitness space, including an 18,000-sq-ft fitness centre, plus dedicated spin studio space. This facility will be more than twice the size of the CGP’s existing fitness centre.

As for the gymnasium, it will be large enough to fit two full-size high school basketball courts – over double the size of the existing CCC gym.

A daycare for up to 37 children is identified as one of the priorities of the new facility.

Bringing everything together will be a 7,266-sq-ft welcome centre, which will provide reception space, cafe and concession, and back-of-house areas and offices.

If the project receives the required funding and final approval from New Westminster City Council, it will be built in two phases, with the aquatic centre, fitness centre, and welcome centre constructed first, followed by the community program spaces and gymnasium.

The existing Canada Games Pool was built in time for the 1973 Canada Summer Games held in New Westminster. At the time, it was considered a state-of-the-art, Olympic-standard swimming and diving pool.