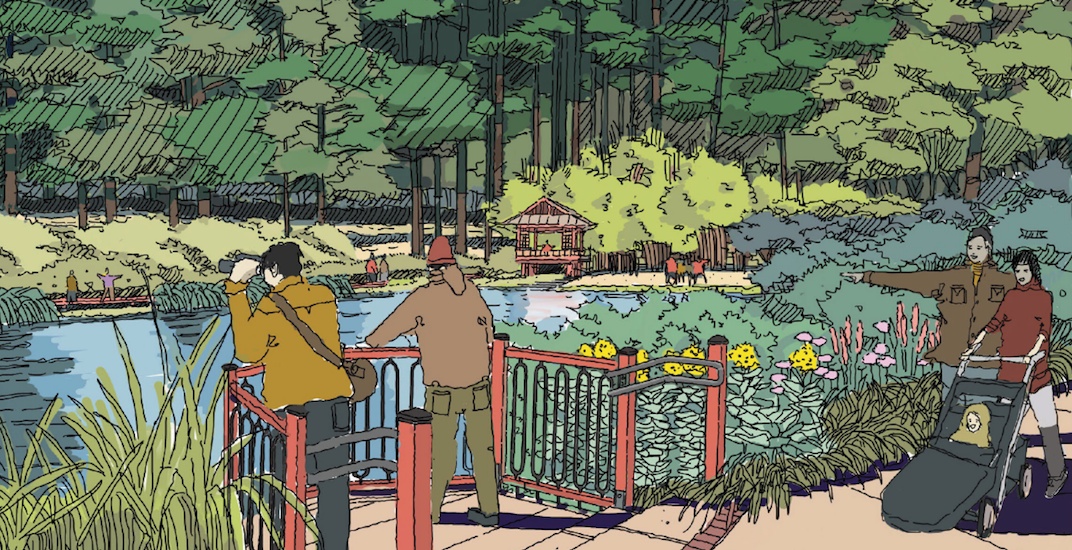 Artistic rendering of a preliminary concept for the improvements to Surrey's Glades Garden Park. (City of Surrey)

It is no secret that Surrey’s public parks and community and recreational facilities have been unable to keep up with the demand from the municipality’s rapidly growing population, but the municipal government is now fully prepared to play catch up.

Earlier this week, Surrey City Council approved a plan to spend $357 million over the next 10 years, by 2027, to create new and expanded public parks and build new community centres and recreational facilities.

This three-pillar PRC Strategic Plan – short for Parks, Recreation, and Culture – outlines the timeline for 29 new parks, including 25 new neighbourhood-level parks, and the major renovation or expansion of 17 existing parks. This includes the larger park projects of building new athletics parks at Grandview Heights and Fleetwood, a new riverfront park along the Nicomekl River, and new urban parks in Newton, Guildford, and Fleetwood Town Centre.

The largest and most expensive standalone projects will, of course, be the new and improved community and recreational facilities, such as:

New capital infrastructure will also be paired with dozens of new policies and initiatives supported by funding, such as increasing the opportunities for residents to experience Surrey’s many rivers, creeks, lakes, and significant oceanfront and creating programs to encourage youth to become more active.

Additionally, the PRC Strategic Plan has an emphasis on fostering the municipality’s arts and culture scene. Among the many objectives in this third pillar include:

The Museum of Surrey, formerly known as the Surrey Museum, is currently undergoing a $16-million renovation and expansion that will reach completion this fall.

The municipal government anticipates its entire $357-million capital plan for the PRC will be funded by neighbourhood concept plans and community amenity contributions ($51 million) and general capital from the City’s annual Capital Financial Plan ($306 million).

But this budget does not cover any of the unknown acquisition costs of the lands required for the new and expanded park space. Instead, the City will attempt to rely on non-taxpayer tools such as development cost charges, a 5% subdivision dedication, density bonus and plan amendments, and donations for its parkland acquisition strategy.

As well, $26 million will go towards the increased maintenance and operations costs of all of the new and improved public spaces and facilities to increase public satisfaction, increase the life-cycle of City investments, and improve public safety. A planned 0.75% property tax increase in 2020 will provide an additional source of operating revenue.