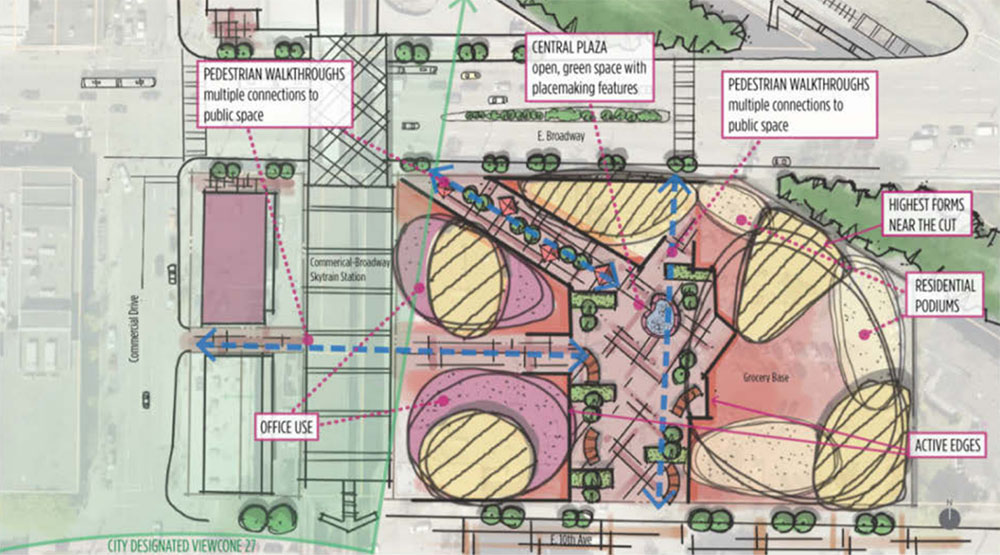 The City of Vancouver has released its latest vision for the Grandview-Woodland area around Commercial Drive, after public opposition forced them to rethink their plans.

The new vision includes towers of between 12 and 24 storeys – reduced from 36-storeys – in the Commercial Broadway station precinct, where Safeway is currently located.

The plans cover the area stretching from Broadway to Burrard Inlet, and from Clark Drive to Nanaimo Street, with Commercial Drive at its heart – for the next 30 years. 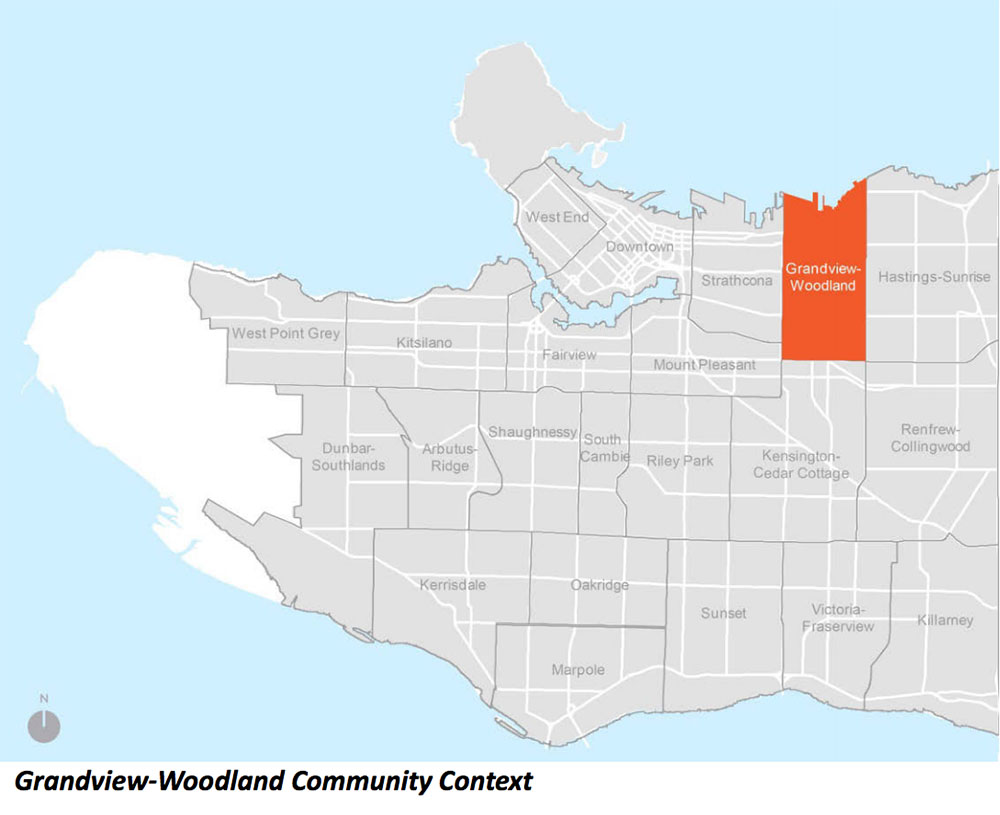 “Grandview-Woodland is one community,” reads the plan summary.

“Yet it is made up of many unique places. The plan builds on the character of each place. The future of each place will be managed differently.”

“The plan recognizes the energy, the identity and “the vibe” that is “The Drive”. It ensures that this unique character will remain vital into the future.”

No image was provided of the 24-storey tower proposed for the Safeway site, although concept aerial drawings were given; see the one at the top of this story and below. 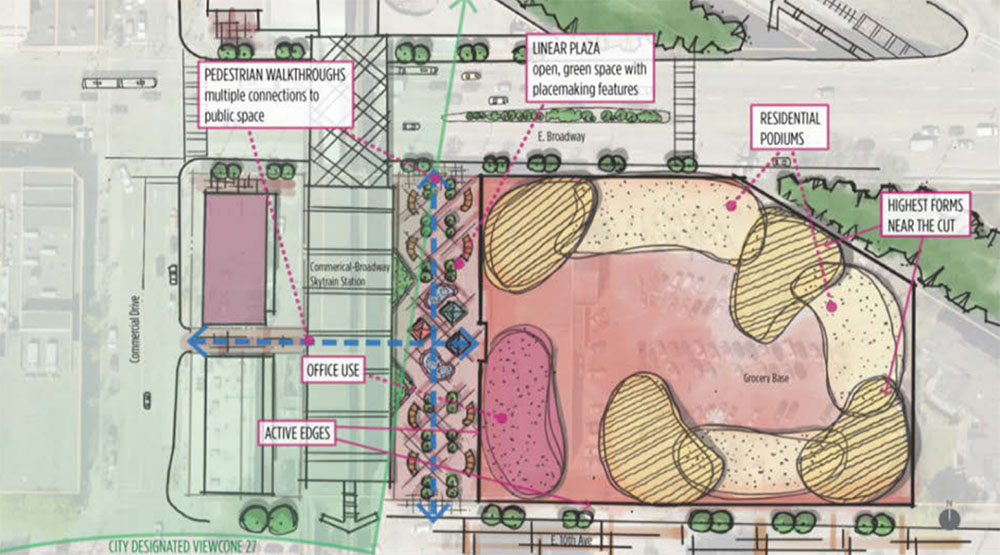 The plan would also see towers of six to 10 storeys next the SkyTrain station and six-storey towers on East Broadway. 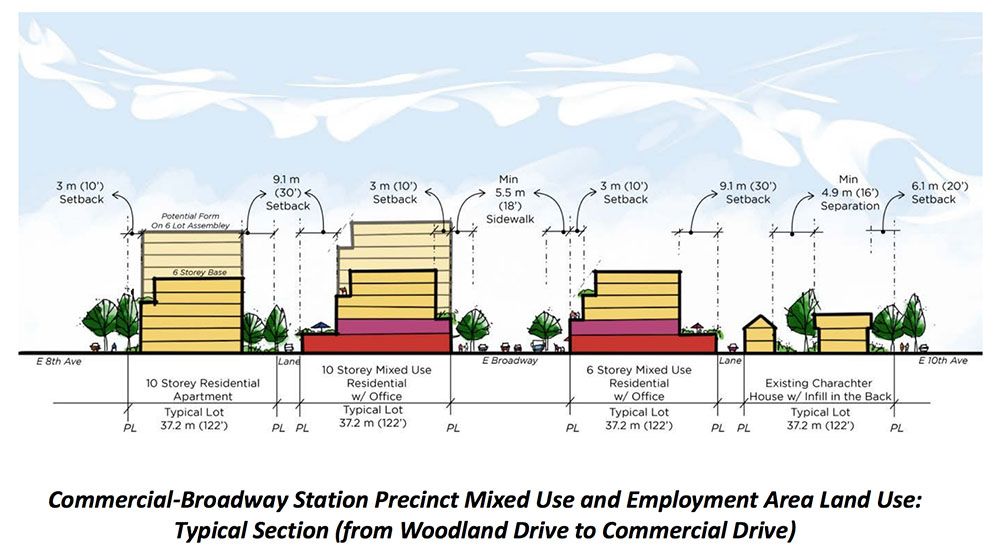 “The plan envisions a mixed‐use community centred on a vibrant new urban plaza at the SkyTrain Station,” reads one City document.

And in Grandview, the City intends to modify regulations to discourage demolition of pre‐1940 houses.

It would also allow a mix of four‐storey apartments and rowhouses for families on arterial streets and in areas near transit routes on Hastings and on Broadway.

In the apartment district at the north end, it would allow buildings up to six‐storeys high.

You can find full details of the plan here: vancouver.ca/gw

In the Grandview-Woodland Community Plan, the City also sets out transportation infrastructure changes which could be coming, not least potential bike lanes.

This includes reallocating two vehicle travel lanes on Commercial Driver to make space for AAA (all ages and abilities) bike lanes in the area south of Graveley Street or 1st Avenue.

The City says this is needed due to the high risk of cyclists getting “doored” – when drivers open their car doors into the path of someone cycling, potentially causing a crash. 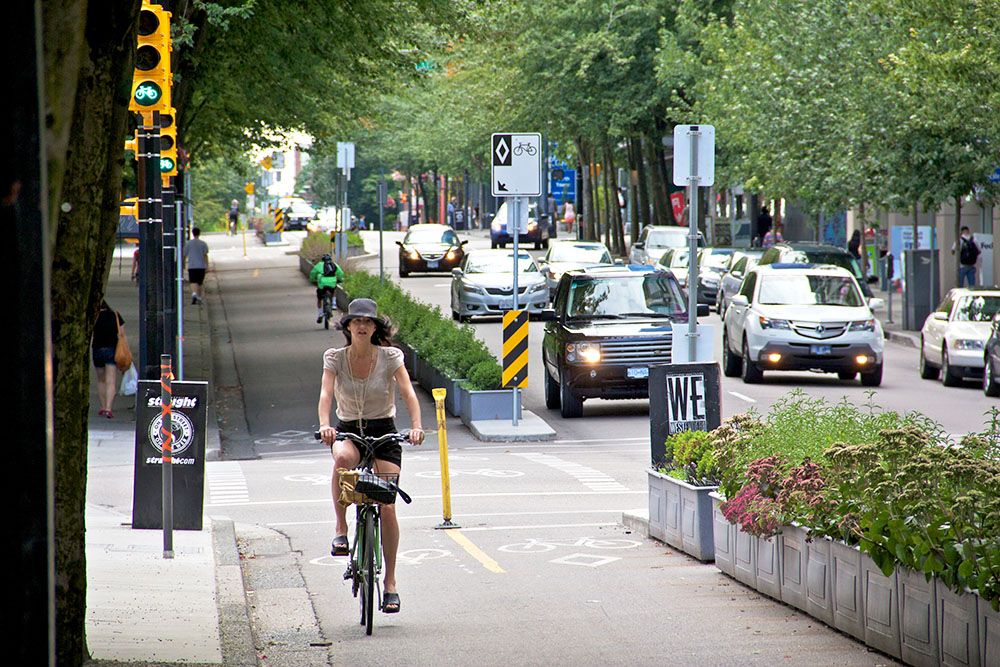 But businesses along Commercial Drive are opposing the proposal for permanent, separated bike lanes, saying it makes them tremendously concerned about the viability of The Drive.

“Eliminating the already limited parking spaces along the Drive will have very serious and negative economic impacts to our businesses which draw customers from across the region and rely on existing street space for customer parking and daily deliveries,” said Nick Pogor, Executive Director of the Commercial Drive Business Society, in a release.

The society has launched a printed petition and online version; it says it has garnered close to 1,200 signatures, but at the time of writing the online petition only had 110 signatories.

“Our members have invested millions of dollars in the region, and the City of Vancouver’s Transportation Department has repeatedly failed to listen to our concerns on this issue,” says Pogor.

The City’s plan also provides for new bike routes along Pandora, Charles or Grant, and East 8th Avenue and the development of protected bike facilities on Nanaimo Street.

As well, a bike facility along Victoria Drive and cycling link between the Powell Street Overpass and Wall Street are both on the cards.

Grandview-Woodland is one of Vancouver’s oldest neighbourhoods, having its roots in the city’s early transportation history with the development of the tram line in the 1890s.

As time went on, says the City in its plan, it became an eclectic, engaged, and deeply passionate community in a highly walkable area.

The first Grandview-Woodland Area Policy Plan was enacted between 1979 and 1983, revising zoning to account for the need for local businesses.

Zoning and design guidelines were revised again in 1987 with the building of the first SkyTrain line and again in 1997, after consultation with local residents.

In 1998, more changes were made because of the introduction of a second SkyTrain line and in 2006, improvements were made to the SkyTrain station.

However, in 2013, local residents became hostile to the City of Vancouver’s newest vision for the Grandview-Woodland community.

It would have allowed towers of up to 36 storeys on the Safeway site next to SkyTrain’s Commercial-Broadway Station and 22 to 28 storeys in other areas nearby.

Public outrage forced the vision to be abandoned, leading to the plans now released by the City.

If you want to have your say, you can do so in the following ways:

Planners will present public feedback to City Council in July, along with the community plan. All updates can be found on the City of Vancouver website at vancouver.ca/gw.