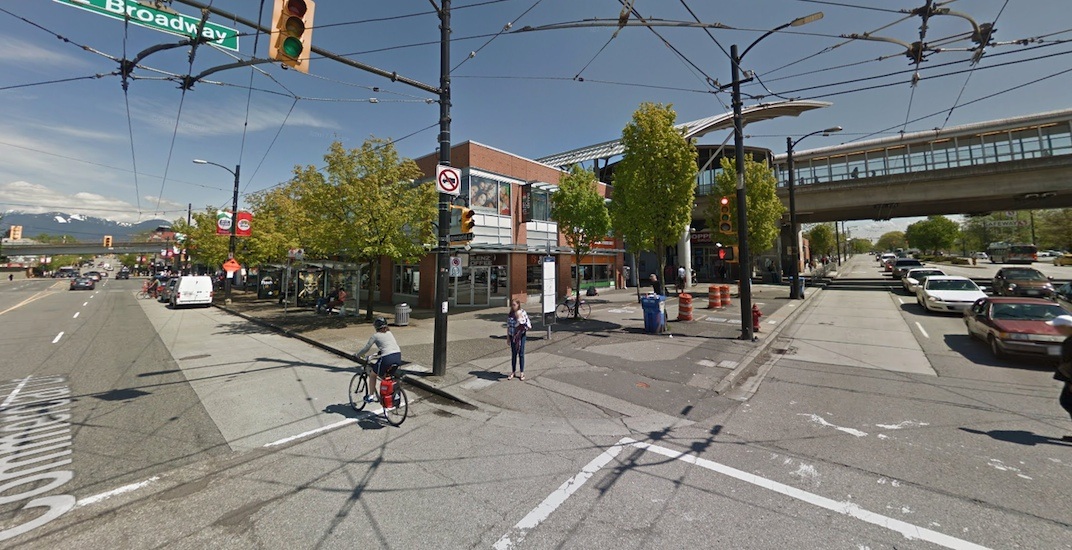 Retail buildings located immediately next to Commercial-Broadway Station, where the Expo and Millennium lines converge in East Vancouver, could be redeveloped into other uses.

The Hub at 2460 Commercial Drive, at the northeast corner of the intersection of Commercial Drive and East Broadway, was listed for sale last year for its redevelopment potential.

It entails two buildings, with the West building – a two-storey structure – located immediately next to the corner containing restaurants such as A&W, Blenz Coffee, Megabite Pizza, Booster Juice, and Buddha’s Chinese Restaurant. Some offices are located on the second storey.

The East building, a one-storey triangular structure, is located on the other side of the concourse area and contains Shoppers Drug Mart.

But the real value comes with the redevelopment potential provided by the municipal government’s 2016-approved Grandview Woodland Community Plan, which allows buildings reaching up to 10 storeys on the sites.

This plan stipulates ground-floor retail and restaurants on the lower floor, facing the street and station concourse areas, and office space in the levels above. Residential use is not permitted.

And there is also immense value from being next to the region’s busiest transit hub. The station already sees foot traffic from 90,000 train trips per day and 60,000 bus trips from the 99 B-Line and trolley bus routes.

Additionally, added value comes from the massive upgrades being performed at the station, although the construction of a new secondary overpass across Broadway could inhibit the flexibility of the scope of the future redevelopment of the Shoppers Drug Mart building. The overpass is built over the building to reach the Grandview Cut. 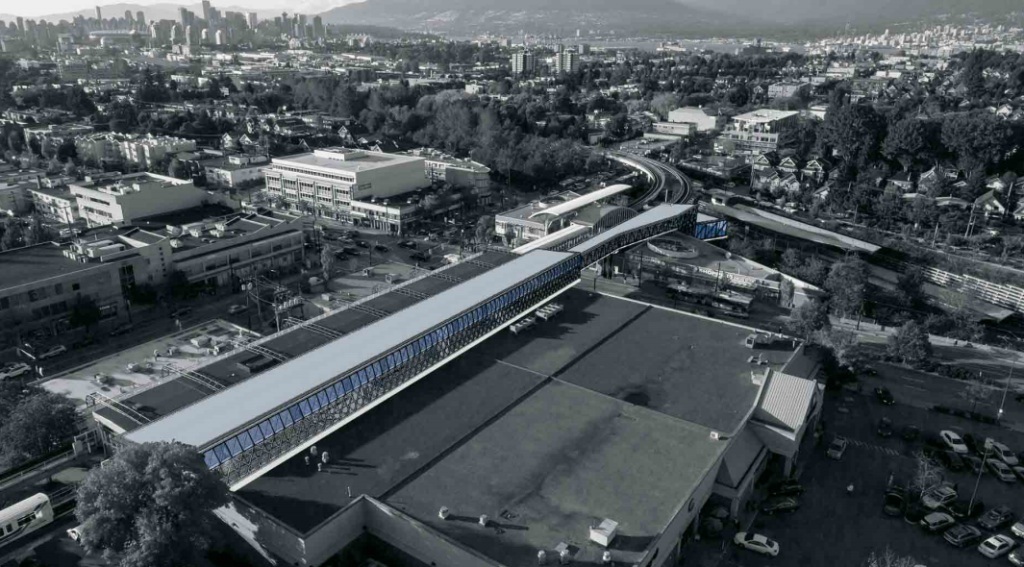 Artistic rendering of the new fourth platform, and the new second overpass over Broadway and the Shoppers Drug Mart building. (TransLink) 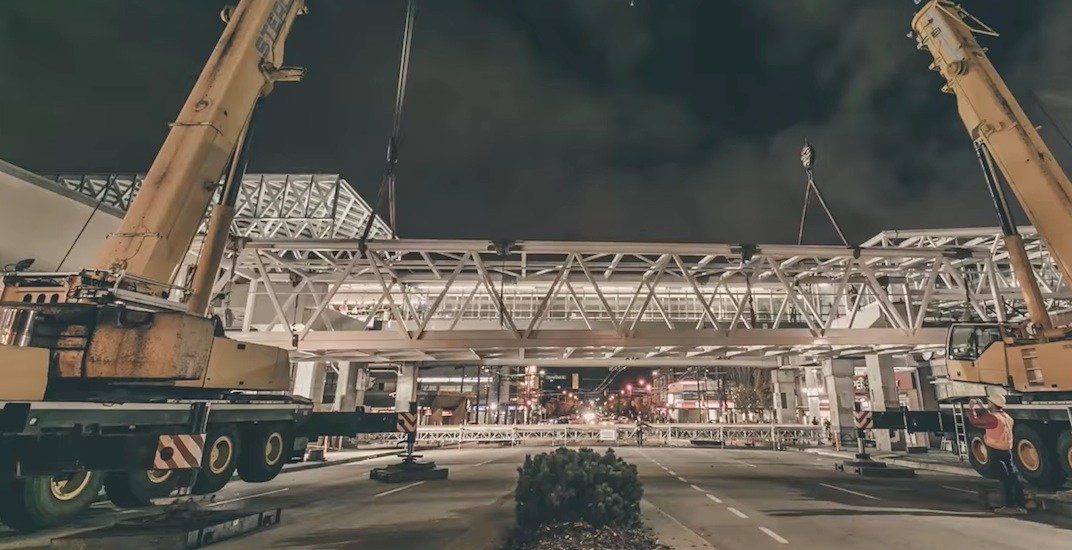 Installation of the new overpass walkway at Commercial-Broadway Station. (TransLink)

The $60-million station upgrade also consists of a new fourth platform serving the inbound train direction into Vancouver, an expanded concourse area for the Expo platform side, a widened pedestrian overpass over the Grandview Cut to reach the Millennium platforms, and additional elevators, staircases, and escalators. This station upgrade project is scheduled to reach completion this summer.

Other major changes will be made to the immediate area from redevelopments such as the Safeway project, which could have four residential towers reaching up to 24 storeys in height and retail uses on the lower floors including a new Safeway store. 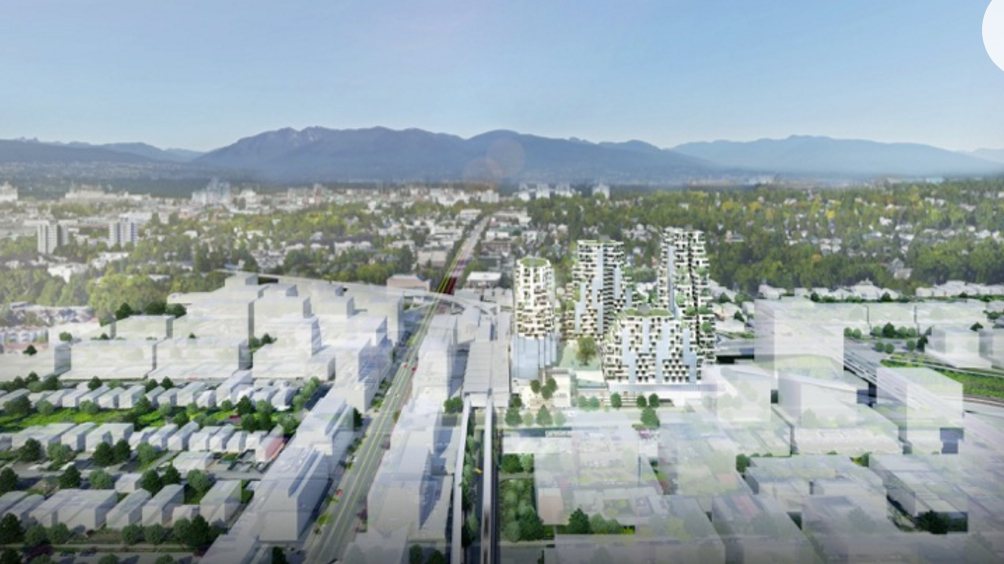 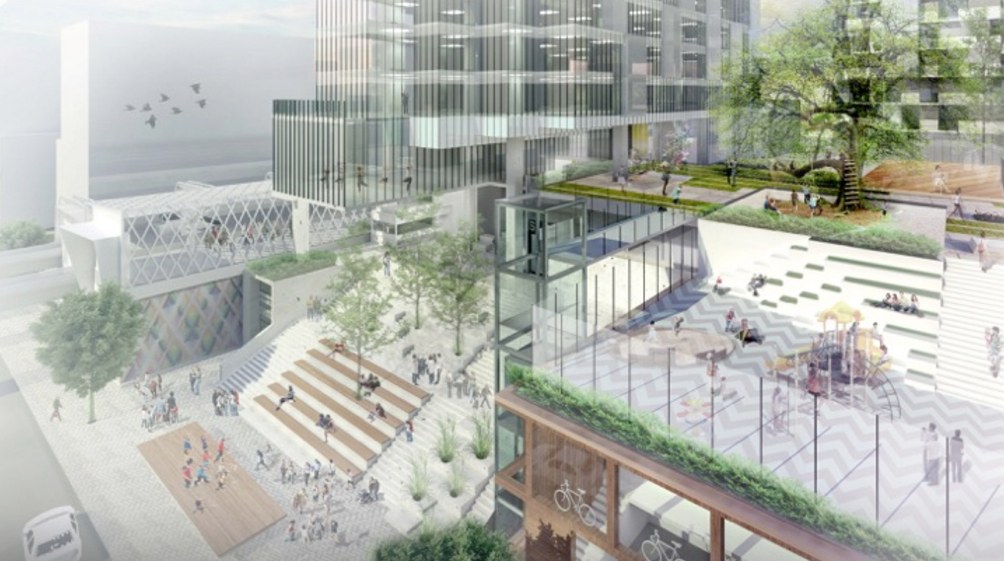 The value and redevelopment opportunities of The Hub’s west building facing Commercial Drive would likely increase if a proposed plaza is built over the Grandview Cut – between The Hub and Grandview Highway – immediately north of the building.

This plaza is being offered by the developer of the nearby Safeway redevelopment as a community amenity contribution, and it would likely increase the property’s possible retail frontage and overall appeal. 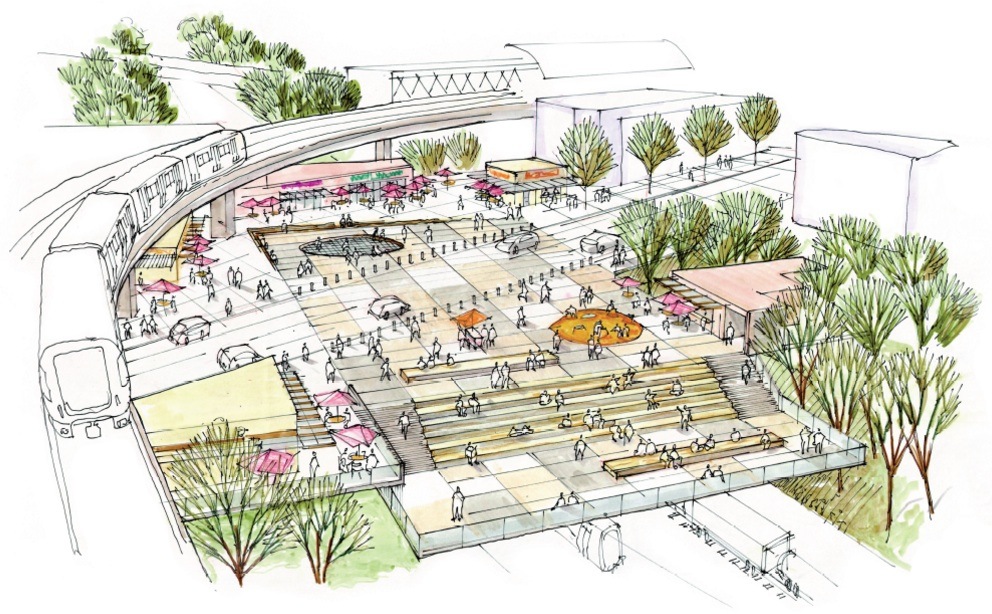 Artistic rendering of the elevated plaza of the Grandview Cut on both sides of Commercial Drive. (Bing Thom Architects / Westbank Projects / Crombie REIT) 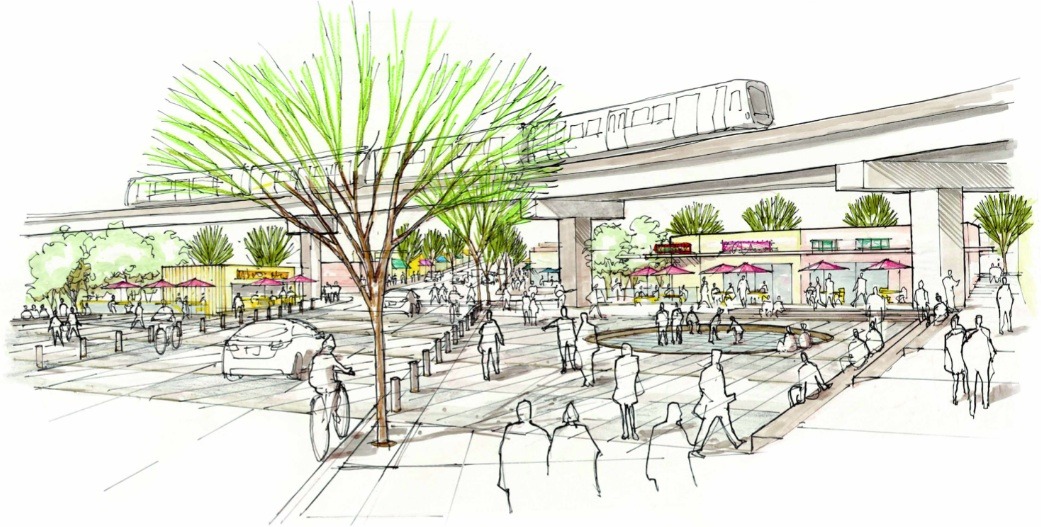 Artistic rendering of the elevated plaza of the Grandview Cut on both sides of Commercial Drive. (Bing Thom Architects / Westbank Projects / Crombie REIT)

A representative with commercial real estate firm Avison Young was unable to comment on the listing’s activity, but a source who wished anonymity told Daily Hive there is mounting interest on the property due to its exceptional location next to the region’s largest transit hub.

The Hub opened in 2002, coinciding with the opening of the Millennium Line and Broadway Station’s transformation into a two-line train hub. According to the latest property assessment, it has an assessed value of $15.3 million.