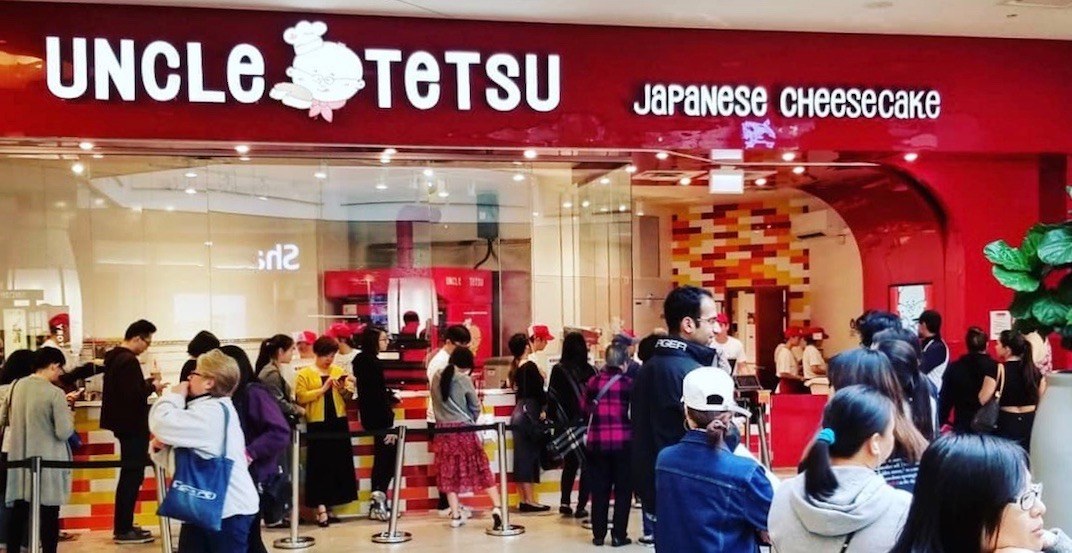 If you’re a foodie living in or around Vancouver, then you know it was a big year for those of us that like to indulge in new eating and drinking experiences.

The year, 2018 brought some serious game changers to the playing field for grub – both well-known chains and local creations like nothing else we’ve seen before. Some were groundbreaking and precedent-setting – like BC’s first-ever strictly-vegan cheese shop and the largest Indian buffet in North America – while others were just simply delicious.

While there were dozens of openings over the past 12 months, these were some of the biggest on our – and our readers – radars for 2018.

Undoubtedly the biggest opening for a major dessert chain in 2018, Uncle Tetsu’s Metrotown Mall location in Burnaby is the first store in BC and Western Canada. Lines were long at the beginning, and let us tell you, there are still folks in queue on the daily for this legendary Japanese cheesecake. 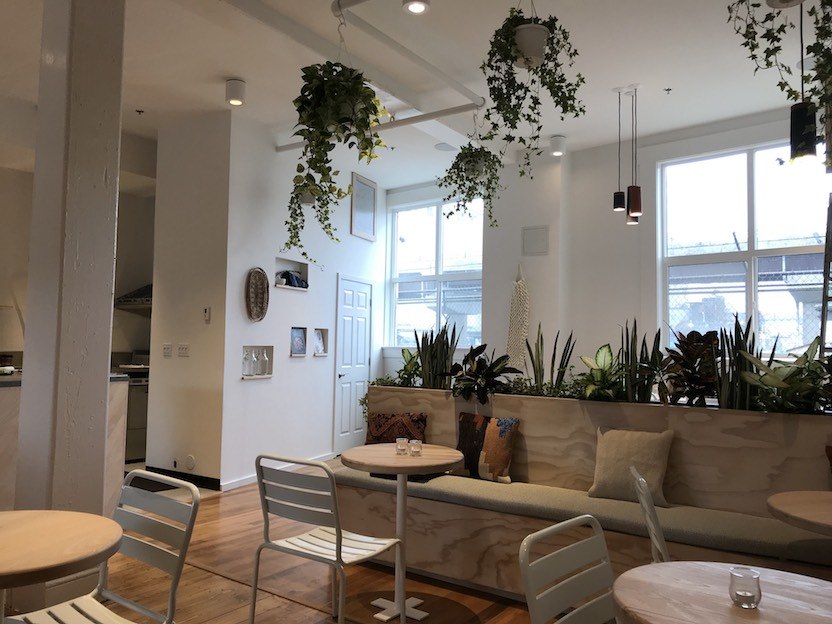 Nestled into the forefront of East Van’s backdrop of train tracks, mountains, brick streets, and water is a re-creation of Palestine (aka home) through the eyes of the husband-wife team: Palestinian born Lebanese chef-owner Haitham El Khatib and his native Vancouverite wife, Fiona. This spot has quickly become a neighbourhood favourite since it opened.

BREWHALL, the newest concept from Vancouver’s Tap & Barrel, officially opened in July. The space features a ‘beercade’ complete with several retro arcade games, and a fast-casual menu packed with eats like shareables, bowls, handhelds, pizzas, and desserts along with cocktails and wine. Patrons enjoy a communal drinking atmosphere where they can sip on unique beer collabs between BREWHALL and top-notch local breweries.

The Toronto-based soft serve ice cream and treat purveyor opened its first-ever BC location in Metropolis at Metrotown in Burnaby in October. People were excited for this one, as they’d seen the epic ice cream treats from afar on Instagram for years.

The 6,800-sq-ft space in Yaletown has seats for 214 and bar seats for 14 along with an additional lounge, along with a patio that can accommodate approximately 34 seated guests as they enjoy stellar cuts of steak and a killer wine collection. The wait felt long but it was completely worth it.

Blue Heron Creamery is BC’s first-ever strictly-vegan cheese shop, which joined a vegan foodie row of sorts on Main Street. As a province first, it’s no surprise that Vancouverites were excited about the variety of non-dairy cheeses up for grabs from this spot.

Japanese mega-chain Nana’s Green Tea opened its first North American location on June 6 in Vancouver’s Kerrisdale neighbourhood. This is Nana’s Canadian flagship store and it features around 20 seats and a menu of matcha treats and drinks.

This much-loved global chain has opened its first Canadian location in Richmond this year. Originally from South Korean, dessert spot Milkcow created buzz due to its unique organic milk soft ice cream and unreal selection of toppings along with other epic eats like Watermelon Soft Serve Sandwiches, Rainbow Cake, and cotton candy-topped sundaes. 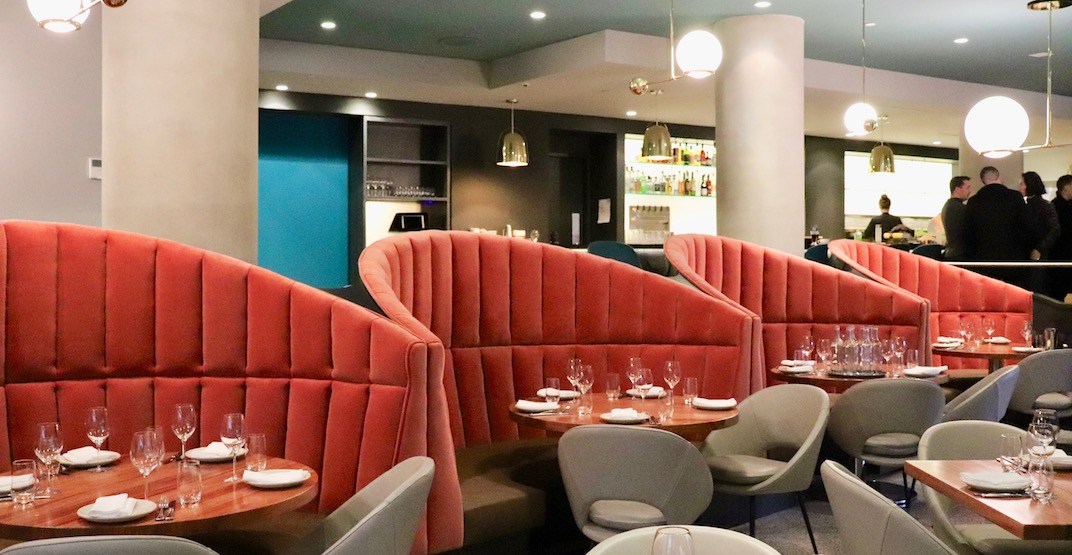 This highly-anticipated seafood spot opened in mid-February. While it may seem a bit under the radar now, it was undoubtedly one of the most talked-about local projects prior to its opening in 2018. Coquille gave some gorgeous life to a slice of prime time Gastown culinary real estate.

The new brekkie and brunch destination opened with a bang (aka a huge line), which was expected considering the buzz around the new Metro Vancouver brunch spot. This was Eggspectation’s first BC location which marks a western Canadian first for the Quebec-based international chain.

Not new, but after a what seemed like a long hiatus, parked itself back on the street in March to the delight of foodies looking for a cheap and delicious deal.

This brand new French-Mediterranean spot is tucked into a prime location in Coal Harbour. The menu, which is brought to us by acclaimed chef Liam Breen, is easy to split around the table, meaning families and groups will love it here. The bar, however, is also a great spot to settle down solo to enjoy a drink and a bite.

At the beginning of 2018, The Rumpus Room announced it would be reopening in a new location. This news came four years after the OG location (2689 Main Street) shuttered in 2014. Known for their comfort food and affordable drinks, this spot is still an uber-popular hangout in its 2.0 version and people are pumped to see it back.

Popina, a project backed by four all-star local chefs including Angus An, Robert Belcham, Hamid Salimian, and Joël Watanabe, opened in July on Granville Island. The first of its kind in Vancouver, the refurbished shipping container eatery boasts an awesome patio and the world’s first soft serve cream puff.

This was the first Earls to open in BC since 2010, and we got a new look and a refreshed menu from the brand. The new spot boasts a 189-seat chic dining room and an 80-seat outdoor patio. The new waterfront dining destination opened on May 9 and was a smash hit from the get-go.

Known for their unmatched selection of Indian eats (we’re talking 150 items on weekends), the Delta location boasts seating for 450 people in its multi-room 11,000-sq-ft restaurant. This is the biggest Indian buffest in North America, which means anyone with a taste for this kind of grub was truly blessed this year.

People went crazy for the oh-so-Instagrammable crispy, marinated hot fried chicken from this eatery. The 1,000-sq-ft space has 24 seats and eight at the bar, along with an outdoor patio, and has consistently brought customers in, both new and old.

Bake49 boasts a small but stellar menu of Double Fromage Cheesecake, Saporo Style Cheese Tarts, Croquant Choux Crunchy Cream Puffs made with real vanilla, and a layered Tiramisu Soft Serve. Lines were long on opening day and considering the crowds didn’t stop, it was a good move for Bake49 to limit the number of sweets people could take at one time.

The spinoff of an exclusive members-only club and art showcase in Beijing, Origo Club boasts seating for 42 at the stunning white marble-topped tables, along with several private rooms that can be rented for larger groups and tea tastings. This spot is truly bad and bougie and people were excited to try it themselves.

Locals were elated when they heard they’d be able to grab this Victoria restaurant’s eats in Vancouver via truck. Patrons love this spot’s chicken sandwiches, vegan falafel sandwiches, bowls, and hummus, and the rush for this grub hasn’t stopped. 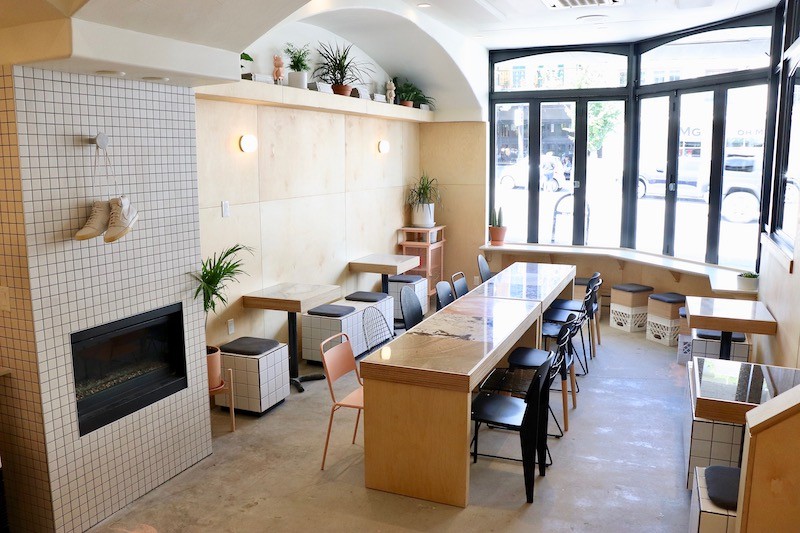 Located at 2042 West 4 Avenue, this spot has taken the former digs of Mission and transformed the space to have the same charm as the owners’ other stellar spot, AnnaLena. A standout for us, Their There is unpretentious and a no-brainer when it comes to return visits.

The Laurence & Chico Café, located at 833 Bute Street, oozes that bizarrely-wonderful Alice in Wonderland charm that’s hard to come by these days, and you can see for yourself once you step in (and don’t forget to check out those epic bathrooms). This kind of playfulness paired with quality teas and treats is never a bad thing in our books.

This was Seorae’s first North American restaurant and it opened in September. Located at 115-5668 Hollybridge Way, this wildly popular chain is known for having the number one skirt meat BBQ in Korea, aka ‘Galmaegisal.’

If you’re a fan of biscuits and everything carbs, this is your ultimate food destination. Chewies Biscuit Co. offers show-stopping creations like the Clucky, a combo of chicken drumsticks on a Bonut (biscuit doughnut) with a sweet glaze or sausage gravy.

Holy mother of bubble tea, super popular Ontario-based purveyor of our favourite sweet drink opened its first-ever BC location and it’s safe to say it was the biggest BBT opening in recent memory.

Tacofino Ocho, located at 8 East 5th Avenue, is the newest addition to the Tacofino family of restaurants. A cult favourite through and through, Tacofino can really do no wrong and this time was no different (aka that bar though).

An institution when it comes to Indian cuisine in Metro Vancouver, the Delta restaurant first announced it was expanding with this second location last spring. This spot has been open since September and been a welcome addition to a quieter part of Yaletown.

While the counter service-only Little Juke is smaller in size compared to the OG Chinatown spot (it has 22 seats), the selection of eats is big, especially location-only epic mac and cheese pops.

Yaletown got a brand new vegetarian restaurant with a fantastic atmosphere and all is right in the world. Patrons love this 2,500-sq-ft, 100-seat sister restaurant to MeeT Gastown and Main Street.

The beloved plant-based pizzeria and ice cream purveyor is known for serving up piping hot veggie-masterpieces from its OG Chinatown location since 2016 along with an outpost in Portland since 2017, and it opened its UBC spot in February.

Located at 4603 Kingsway (right across from Metrotown) the 1,560-sq-ft space is double the size of the Gastown shop, and it was designed to be an ice cream cafe, where guests can enjoy not only ice cream but desserts and coffee too.

Located at 145 East Pender Street (just outside of Fortune Sound), this 50-ish seat eatery offers modern takes on Vietnamese classics like Pho and rice bowls, and they also have a full bar. We also can’t forget those stellar Vietnamese coffees with condensed milk – for those who don’t need sleep.

At the newest 2,200-sq-ft, 60-65 seat outpost, patrons can expect the same charming vintage interior, relaxed vibe, outrageously drool-worthy eats, and hours (daily from 8 am to 3 pm) from the third location of the epic brunch spot from co-owners Jim and Candy Walmsley and Mike Deas-Dawlish.

One of Downtown Vancouver’s most loved spots for crafted coffees and delicious eats, Bel Cafe, opened a new location across the bridge. Located at 1780 West 3rd, this Kitsilano destination for lattes, salads, sandwiches, toasts, and pastries is the cafe’s second location.

Located in the former spot of Culprit Coffee at 2028 Vine Street, this is the second Vancouver location for the popular vegan eatery.

The Mount Pleasant store is the third bakery for the chain, including the OG Whistler and Gastown locations. This place is huge and people were excited to have these epic baked goods in another neighbourhood.