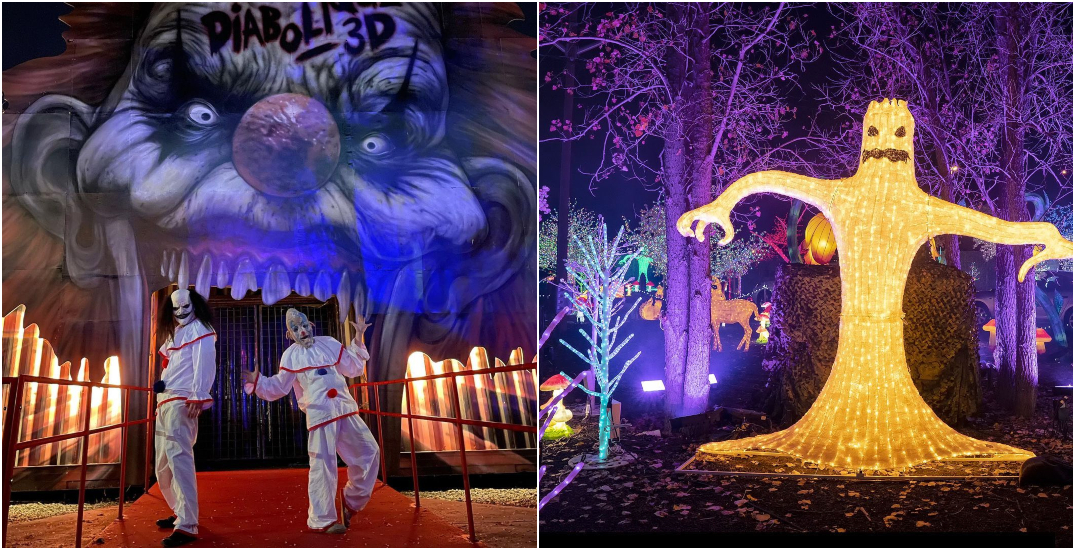 At this time last year, there really wasn’t too much to do because of the pandemic. This year, however, Montreal is oozing with great things to do to get into the Halloween spirit.

Since Halloween falls on a Sunday this year, that means you can take advantage of a full weekend of spooky in Montreal.

Watch a scary movie in between any of these events and chalk up Halloween as a great success.

Here are a bunch of spooktacular things to keep on your radar in Montreal this Halloween.

A screening of the 1975 film takes place at The Dollar Cinema on October 31, where guests are encouraged to dress up, yell, sing, dance, and throw special props around the room.

The film follows two young lovers, Brad and Janet, who set out to visit their old teacher. On the way there, their car breaks down, and they’re forced to walk up the road to a creepy castle to find a phone. Instead of finding a phone, they find a mad scientist, AKA a “sweet transvestite from Transylvania,” who has chosen to bring his own creation to life.

Get dressed up and have a night. 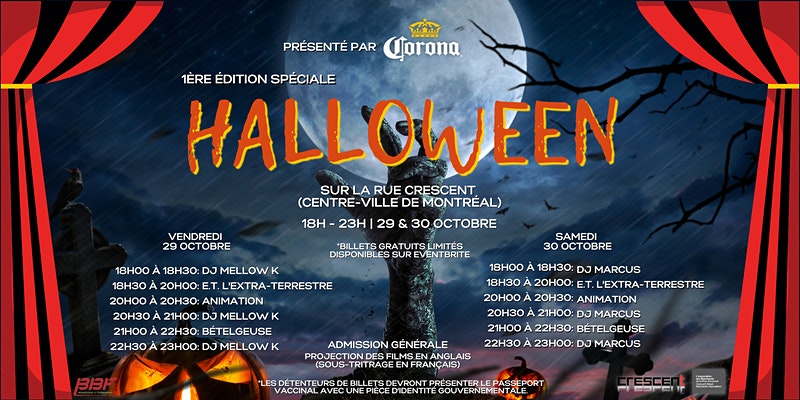 An outdoor costume party is happening on Crescent Street this Halloweekend.

On October 29 and 30, come dressed in your spooky costume to watch classic Halloween movies like E.T. and Beetlejuice (original versions in English with French subtitles). The event will also feature DJs and other outdoor live entertainment.

This year marks the first edition of Halloween on Crescent Street in Montreal. The two-day party, happening between Sainte-Catherine Street and de Maisonneuve Boulevard West, will take up a good chunk of the downtown area.

Halloween is usually associated with dim lights and spooky spots, but this weekend, Montreal will be shining bright with all types of monsters, ghosts, and witches.

Illumi in Laval is showcasing a Halloween light show that guests can either check out on foot or in their car.

There are over 25 million LED lights and fixtures erected in different Halloween themes.

A post shared by Candlelight Concerts by Fever (@candlelight.concerts)

Maybe you want to substitute a spooky Halloween event for some music and introspection? In the dark.

Get ready to shiver during a series of concerts at the breathtaking Chapelle Notre-Dame-de-Bon-Secours.

From timeless classics to horror themes from movies, emotions will come to life, offering guaranteed goosebumps featuring concert renditions of Michael Jackson’s “Thriller,” Danny Elfman’s “This Is Halloween” from The Nightmare Before Christmas, the theme from Psycho, and much more.

If you love learning about Montreal’ss history along with the supernatural, Haunted Montreal has you covered with their series of paranormal tours that you can take part in across the city.

Haunted Montreal will be conducting paranormal investigations in Griffintown and the Old Port this weekend.

The tour also features a deep dive into the “Legend of the Red Cross,” paranormal happenings at the Queen Elizabeth Hotel, and a visit to a creepy old funeral home that has been converted into a nightclub.

The popular tour is praised by horror fans, historians, and everyday people looking for a thrill.

For tickets and more information, visit the Haunted Downtown website.

How about marvel at tens of thousands of pumpkins this weekend?

Because Pumpkinferno showcases over 7,000 handcrafted pumpkins lit up at night along a one-kilometre path against a 19th-century backdrop. Some are individual pumpkins, and some are fused together to make some outstanding and pretty impressive art pieces.

Photo worthy, for sure.

If you’re looking for thrills and frills this weekend, look no further than La Ronde’s frightening Halloween events calendar.

After you’re done screaming for your life on Le Ednor, get chased around the park by ghouls and monsters.

A post shared by Time Out Market Montréal (@timeoutmarketmontreal)

Drag queens, good food, and spooky vibes. What’s not to like?

This majestic trio makes up one of the city’s most unique upcoming seasonal events: Halloween Drag Brunch at Time Out Market.

The October 31 brunch will be hosted by none other than Montreal drag legend Barbada de Barbades, and will feature some of the city’s top queens.

If you haven’t had enough pumpkins yet this season, Laval’s Ferme Marineau has more than 50,000 ripe for the picking.

The pumpkin patch has been in operation since 1927 and offers guests a wheelbarrow in order to capture and transport as many pumpkins as you can.

The farm has an impressive selection of fall-based activities on-site as well, including pumpkin tic-tac-toe, pumpkin bowling (which is exactly what it sounds like), a giant pumpkin house, corn maze, a petting zoo, tractor rides, and of course, food and drink.

If rollerblading on a smooth surface to the even smoother sounds of the 70s sounds like a good Halloween time to you, then you’re in luck. This weekend, Roller Disco Montreal is hosting a Halloween-themed party, and everyone’s invited.

The roller disco-a-thon takes place at Arena LeRinque in Mont-Royal for a smooth $20.

And yes, you’re encouraged to dress up.

Speaking of dressing up, Club La Voûte is hosting hundreds of costumed guests at its Halloween Ball.

The event is inspired by supermodel Heidi Klum and the legendary parties she held in the former Banque Royale.

Get ready for spooky music, dancing, and thrilling costumes. This one is wild.

A two-kilometre maze in the Old Port has been transformed into an all-out spooky season puzzle.

A “zany creature” is set to be roaming the grounds. Thematic decor, festive atmosphere, and military costumes will also be part of the Halloween celebration.

Halloween lovers will also delight in learning that maze attendees who show up in costume will receive a 15% discount.

The SPASM film festival, which has been screening horror films since mid-October, is concluding this weekend with a huge costumed Halloween bash.

The annual short film festival is offering exciting movies from gore, to thrillers, science fiction, drama, and of course, horror.

The scare fest screens across various venues throughout Montreal, including the iconic Club Soda and Theatre Plaza.

When: From now until October 31
Time: Various times
Where: Various venues across Montreal
Price: $40 – $75