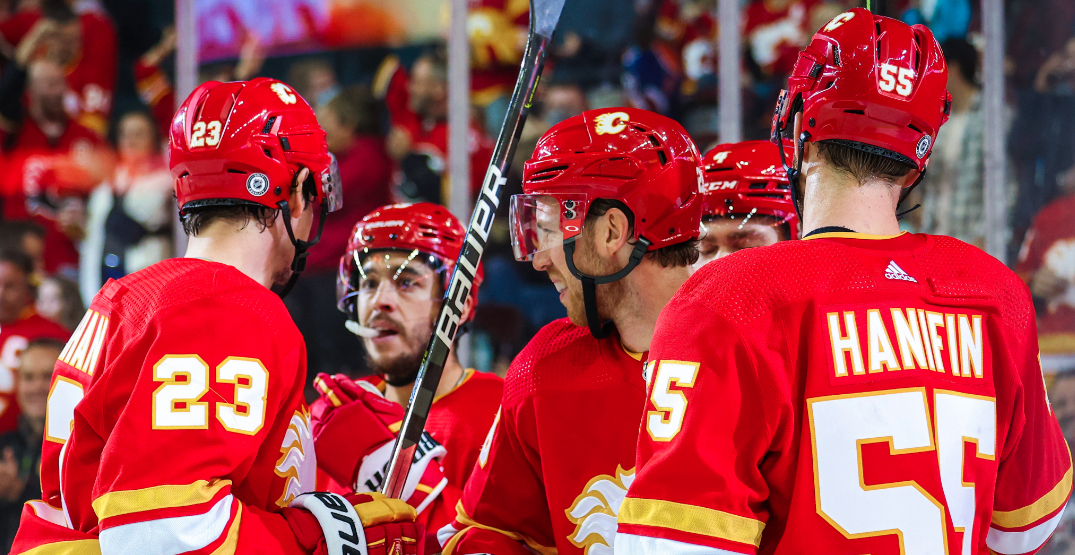 Its big step for a squad seemingly faced with wave after wave of bad news this week with a rampant COVID-19 outbreak temporarily sidelining the season.

“Our priority remains right now just monitoring and looking after players, staff, family members, everybody in our group that’s been affected,” Flames general manager Brad Treliving said Friday. “I can say at this particular time everybody is doing well, and that remains our No. 1 priority is just looking after those folks and anybody else affected with this.”

Moving targets, it seems, with updates coming quickly with 19 of 23 roster players currently in the NHL’s protocols.

But one thing is already decided: the team is at a standstill until after Christmas.

And the good news is cases have been overwhelmingly mild or asymptomatic to date.

Here’s where we’re at, and how we got there:

“We got those results back late Saturday night, early Sunday morning…sort of in the middle of the night,” Treliving said Tuesday. “That was sort of the first round of positives.”

The Flames, scheduled to depart for a flight to Chicago to start a two-game road trip, delay takeoff to test at the airport with both rapid and PCR tests. The initial three players remain at home, and their positive tests are confirmed. More positives are confirmed within the team, and the flight is cancelled.

“These situations, once you get into a positive test, that gets turned over to the league,” Treliving said. “League doctors work with our medical staff, work with the PA medical staff, and it was late in the evening on Sunday that the determination was made that we wouldn’t be traveling to Chicago.”

An initial group of six Flames players, including Elias Lindholm, Andrew Mangiapane, Christopher Tanev, Nikita Zadorov, Brad Richardson, and Adam Ruzicka, as well as one member of the training staff, is announced as having tested positive. The Flames enter a daily testing protocol.

Three games are postponed, including Monday at the Chicago Blackhawks, Tuesday at the Nashville Predators, and Thursday at the Saddledome against the Toronto Maple Leafs.

“At that point, everybody was then placed in isolation at home.”

Three more players — Noah Hanifin, Milan Lucic and Sean Monahan — are announced as added to the protocol, pushing the total to nine players and one staff member.

“Brought our group into the rink (Monday), starting the daily testing program,” Treliving said. “Got those results back from (Monday) night, which confirmed three more positives, which we communicated.”

Saturday’s game at the Saddledome against the Columbus Blue Jackets, is also postponed.

Two more players, Dillon Dube and Oliver Kylington, are added to the protocol, as is one staff member. In total, 30 members of the team are in protocol: 18 players, three coaches and nine staff members.

The outbreak includes cases of the Omicron variant, the team confirms.

Mikael Backlund and one staff member are added to the protocol list, pushing the total to 32 total members of the organization. This includes 19 of 23 roster players, three coaches, and 10 staff members.

More games are postponed by the NHL, both home dates, including Tuesday against the Anaheim Ducks and Thursday against the Seattle Kraken. This leaves the earliest scheduled game as December 27 at home against the Edmonton Oilers.

“So effectively we are postponed through the Christmas break,” Treliving said Friday. “That’s all we know at this time. I think what we will be doing is seeing how things progress over the course of the next few days but as far as scheduling timelines and all the rest of it, right now we’re postponed.

“Our facility for any Flames activities, workout, skates, anything of that nature, remains closed. We’ll get direction on that as we move forward.”

No new cases for either players or staff reported by the Flames. Testing will continue.