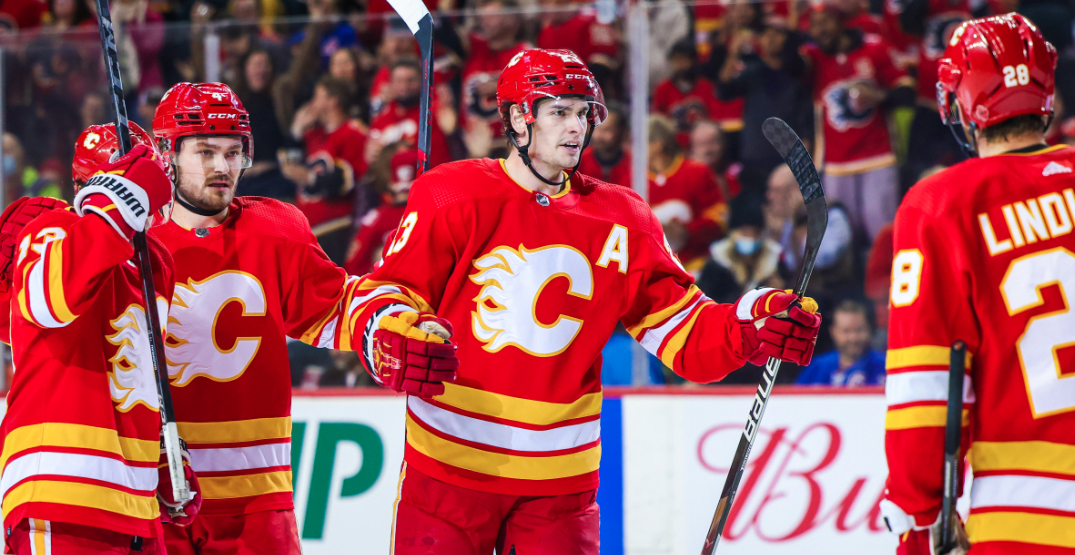 There hasn’t been a lot of good news out of the Calgary Flames’ drastic COVID-19 outbreak.

But there has been some.

The symptoms have largely been manageable for the 32 team members, who are all fully vaccinated.

“Overwhelmingly so far, our cases have been either asymptomatic or mildly symptomatic,” Flames Head Physician and Medical Director Dr. Ian Auld said via Zoom on Friday.

“We do have a few people, probably anywhere from four to six, and lots of cases are an evolution so things may change, but have had what I would call moderate symptoms…chills, fevers, fatigue…but quite quick turning the corner within 36, certainly 48 hours.

“So overwhelmingly we’ve seen mild disease, which is very reassuring for hopefully the world, but certainly us as a group.”

"I can say at this particular time, everyone is doing well."#Flames GM Brad Treliving and Medical Director Dr. Ian Auld discuss the recent game postponements due to COVID-19 Protocol. pic.twitter.com/WoNVgavz6w

So the silver lining, perhaps, is that the situation — an outbreak that has seen 19 players, three coaches, and 10 staff members put in protocol as of Friday — could be worse.

“I can say at this particular time everybody is doing well, and that remains our No. 1 priority is just looking after those folks and anybody else affected with this.”

That reaches from Saddledome to home for the suddenly inactive team.

Only four players — Matthew Tkachuk, Dan Vladar, Blake Coleman, and Michael Stone — have yet to test positive of the 23 on Calgary’s active roster from Saturday’s game against the Boston Bruins — the last time the squad has suited up.

Not surprising, perhaps, with three cases confirmed as the highly-contagious Omicron variant of COVID-19.

“My anticipation is if there’s three, there’s more — if not all,” Auld said. “That information should be leaking in within the next 48 to 72 hours.”

The Flames started the season with a 15-7-6 record, and woke up Sunday in first in the Pacific Division.

They also woke up Sunday to the news of the first reported cases on the club.

“No. 1, you’re concerned about the players and you have families involved in this. Everyone talks about the athletes and staff, which is important. Equally important is family members. We want to make sure they’re all safe. That’s priority one.

“But they’re doing well. You never want to have your season interrupted. We’re having a good year. They’re eager to get back. No. 1, lets keep the medical situation paramount and front of mind, but competitively they want to get back. They’re trying to look at this as a bump in the road. We’re going to get through it and get on the other side of it and get going here.

“No one likes to be holed up, but all things considered, the group’s doing well.”

The National Hockey League stepped in again Friday, shutting down all Flames activity until after Christmas after initially postponing four games earlier in the week.

In all, six games have been shuffled, including home dates against the Anaheim Ducks on Tuesday and Seattle Kraken on Thursday.

Calgary isn’t on the schedule again until a December 27 date against the Edmonton Oilers, who currently have three players and one coach in protocol.

“I think it’s the right call,” Treliving said. “We have a pretty good 3-on-3 team. They might’ve been tired when it’s all said and done, but there comes a point where you don’t have the guys left. I joked to Darryl, it’s probably the only time players wouldn’t have bitched about ice time.

“It was the only call that could be made.”