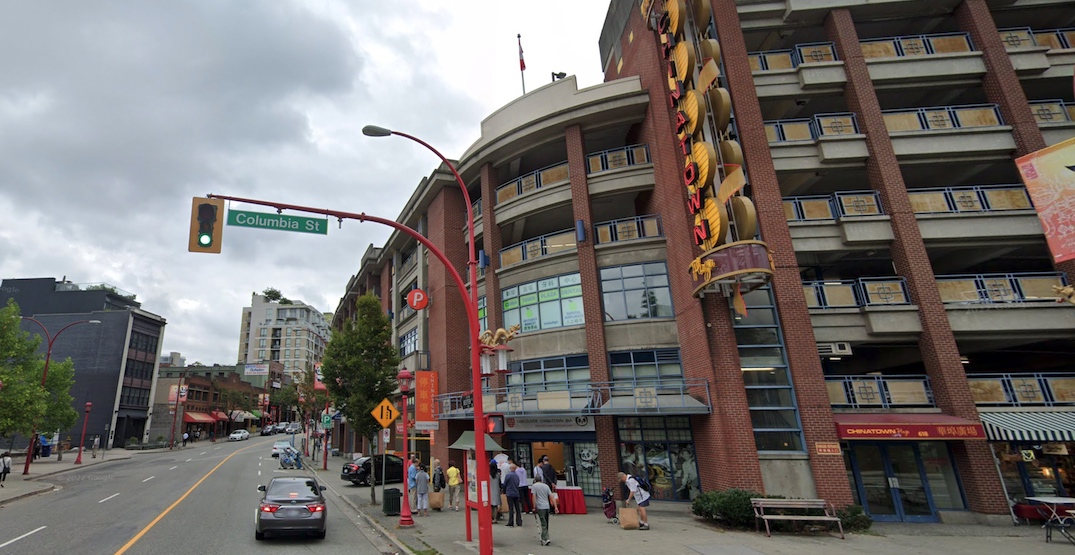 In just over the past 48 hours, the Vancouver Police Department has reported a 300% increase in graffiti in the Chinatown district in recent months, and it responded to three arsons that happened within hours apart overnight Tuesday.

A new member motion by De Genova that will be considered by Vancouver City Council next week calls for a pilot project offering free car parking on the curbside of streets across the district and at Chinatown Parkade at 180 Keefer Street, which is owned by the City of Vancouver, and operated by EasyPark.

In an interview with Daily Hive Urbanized on Tuesday, De Genova says she is responding to overwhelming requests from Chinatown businesses and community groups to establish free parking on weekends to bring people back to the community.

As outlined in her motion, this could be a one-year pilot project, with free parking initially offered on Sundays only, and potentially expanded to Saturday as well in the future.

There would be a three-hour parking duration time limit to encourage turnover, and ensure cars are not parked all day and night.

Parking facilities both on the street and in lots are currently under-utilized, according to the Chinatown businesses and groups. It has 930 stalls, with 650 stalls used as ungated parking.

The goal of offering free parking is to not only support businesses, but also generate more visible foot traffic in the streets of Chinatown to improve safety.

She says Richmond businesses are able to offer free parking to customers on City of Richmond or privately-owned lots, and this has created competition for Chinatown businesses.

“I’m hoping that instead of just talking about how to help Chinatown, we’re going to take action on this… As a city, we need to address this, and do whatever we can to help the community.”

But De Genova says city staff do not appear to be enthused with considering free parking to help Chinatown.

She sent her member motion to city staff for early feedback, but felt “taken aback” by comments from city staff over their concerns on the financial costs of giving up parking revenue on Sundays, and that this would contravene the municipality’s climate action goals.

She recollected city staff’s rare move in October 2020 of recommending against her proposal of providing free parking for Canadian Forces veterans at city-owned curbside meters and parking lots, but it was subsequently approved ahead of Remembrance Day 2020 as a pilot project after a public outcry. The various concerns expressed by city staff later proved to be completely unfounded, and in October 2021 the free parking for veterans initiative was made permanent by city council following a recommendation by city staff.

De Genova’s motion also calls upon city staff to work with stakeholders, community groups, and businesses, and engage with the Vancouver Police Department on effective measures to deter and prevent unwanted behaviour in Chinatown’s hot spots for violent crime, vandalism, property theft, and graffiti. This would be conducted before July 2022, with potential measures such as additional lighting and CCTV.

Windows across the district are broken frequently, and they are a costly repair expense, especially for many of the small businesses.

Moreover, murals, artwork, and other public art have been defaced with graffiti, including messages of hate and anti-Asian slurs.

For instance, the not-for-profit Chinese Cultural Centre in the heart of Chinatown has been besieged by daily vandalism — not just broken windows, graffiti, theft, and dumps of garbage, but needles pushed through doors or partially protruding to injure an unsuspecting passerby, fire exit doors tied shut with rope from the outside, and attempts to set fire to their buildings. These malicious acts have escalated in frequency over the past five years.

The extent of public safety issues has also forced Chinatown Business Improvement Association to spend a staggering 50% of its annual budget on supplemental security for the district and its businesses.

“I’ve heard that there has been a rise in not only the street disorder, but also the sentiment of Asian hate,” she said.

“Overall, I’m hearing from business owners in Chinatown that they want to keep their businesses open, but not only is it coming to a great cost from them, they also don’t feel safe coming down to Chinatown, never mind their customers.”

Additionally, she is requesting city staff to analyze whether the current and worsening state of Chinatown will have any impact on the municipal and provincial government’s ongoing efforts to pursue a UNESCO World Heritage Site designation for Chinatown.

She says the planning process for the City of Vancouver’s application to the United Nations Educational, Scientific and Cultural Organization (UNESCO) for the World Heritage Site designation costs the municipal government hundreds of thousands of dollars annually. The initiative was first approved by city council in 2017 as one of the measures to help preserve and revitalize Chinatown.

“Not investing in measures to decrease violent crime, street disorder, and graffiti could be working against ourselves to try to get that UNESCO status,” said De Genova.

“Why would we make significant investments to try to get the status for Chinatown if we don’t deal with the immediate problems right now?”

At the height of the pandemic in 2020, there were also calls for a minimum assistance measure of reducing parking fees in Chinatown.