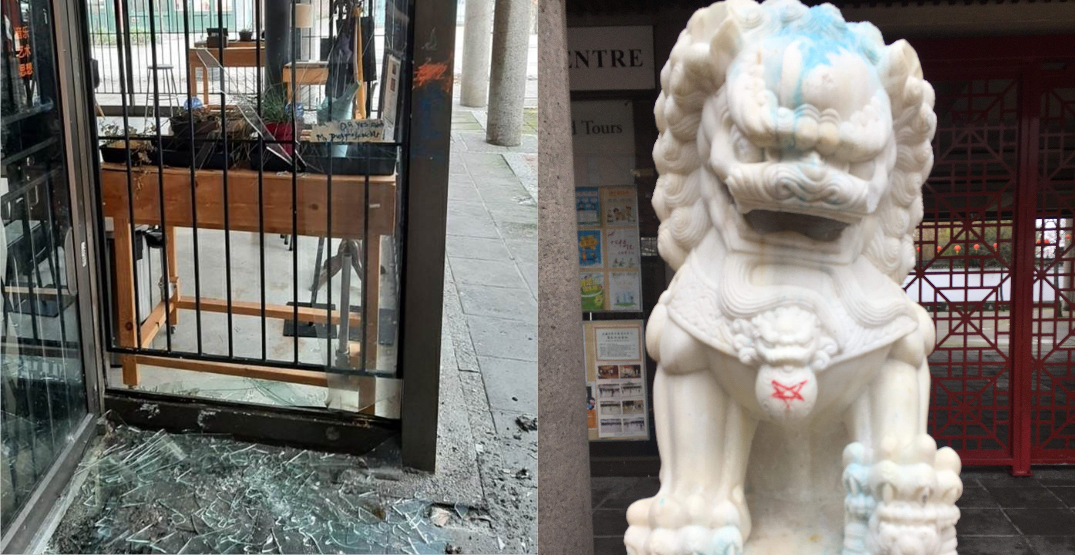 There was a graffiti spree around Dr. Sun Yat-Sen Gardens discovered on Sunday, January 16, and then the next day a window was smashed at the adjacent Chinese Cultural Centre.

Lorraine Lowe, the garden’s Executive Director, shared an image from her colleagues of the broken glass.

Lowe told Daily Hive that VPD was working on site on Monday, January 17 visiting neighbourhood businesses and collecting information for their investigations.

While the graffiti has since been painted over, Lowe said that vandalism like this has been “aggravating.”

VPD spokesperson Constable Tania Visintin said that VPD’s Property Crime Unit is heading up the investigation and there are no suspects yet.

“The graffiti at Dr. Sun Yat Sen Gardens is disheartening,” said Visintin, who remains hopeful that they’ll have success identifying a suspect.

“We’ve had success in identifying people responsible for a number of recent graffiti incidents, including at the Komagata Maru Memorial, St. Jude’s Parish and at the Chinese Cultural Centre.”

A rep from the Chinatown Business Association said that the recently targeted Dr. Sun Yat-Sen Gardens is a cultural institution and a major landmark in Chinatown.

“It is saddening and disheartening to see this level of malicious vandalism on our community,” they said. “However, this is not the first time we have seen anti-Asian vandalism in our neighbourhood.”

“Chinatown has increasingly become a target of graffiti tagging, windows being broken as part of a general social disorder in the Downtown Eastside,” they said.

“The business community remains resilient with many new shops and restaurants that are bring young people and families to share in the local vibes.”

Daily Hive has reached out to the Chinese Cultural Centre for more information and will update this story.