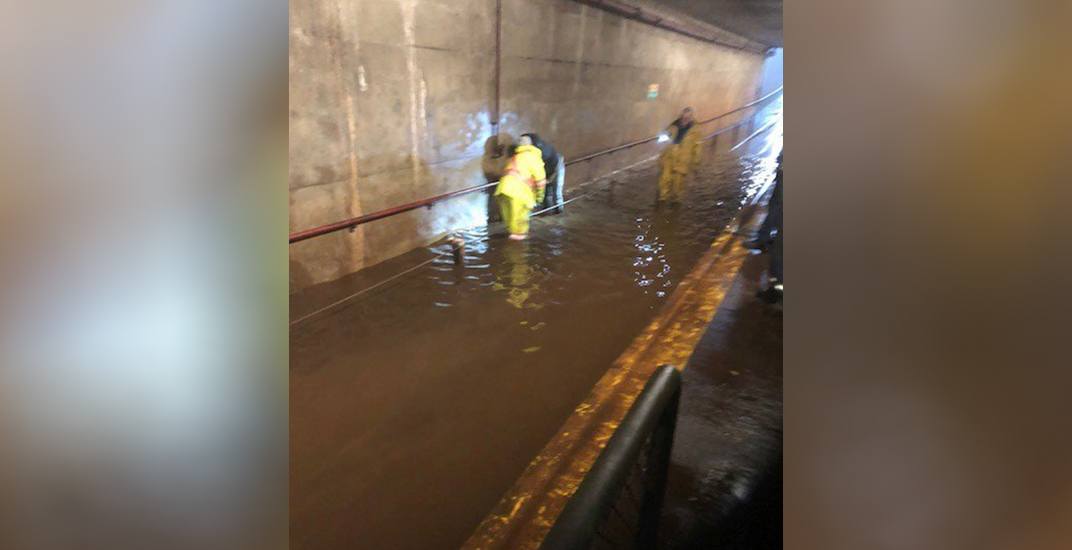 Flooding in the SkyTrain Columbia Station tunnel in New Westminster on December 11, 2018. (TransLink)

As of 6:55 pm, the station reopened and regular service on the Expo Line resumed, but it will take some time for crowding to subside and for trains to return to their normal pacing. The Millennium Line was unaffected by the Expo Line’s issues.

Based on TransLink’s service disruption reports, a decision was made at approximately 5:30 pm to shut down Columbia Station and turn around trains.

But there were also flooding issues at this station earlier in the afternoon that affected train schedules. Regular Expo Line services resumed just before 5 pm, but only briefly, as flooding issues quickly returned.

Columbia Station’s tunnel is susceptible to flooding as the station’s tracks are exposed to the elements, allowing water to pool. As well, water funnels into the station from both ends of the sloping tunnel entrances.

This is not the first time there has been a major flood-related service disruption within the Columbia Station tunnel. On December 11, 2018, heavy rainfall flooding a segment of the tunnel led to hours-long service disruptions.

#SkyTrain #StationAlert Expo Line is experiencing delays of up to 10min due to flooding at Columbia Station. Updates to follow.
Canada Line and Millennium Line are unaffected. ^sdk

#SkyTrain #StationAlert Expo Line is returning to regular frequency after earlier delays due to flooding at Columbia Station. Thank you for your patience ^sdk

Columbia Station is open to the elements directly above the tracks and as a result is exposed to the heavy rains. ^sdk

#SkyTrain Expo Line Columbia Station is closed due to flooding. Trains will be travel between Waterfront & New Westminster Stations, between King George & Scott Road Stations, & between Sapperton and Lougheed Stations. Canada Line and M-Line are unaffected.^jd.

#SkyTrain #StationAlert Expo Line Columbia Station has re-opened. Service is returning to regular routes and frequency. Canada Line and M-Line are unaffected. Thank you for your patience. ^sdk

We’re making progress. This is what it looks like now. We thank our customers for their patience. ^at pic.twitter.com/ivqWhmPLfO

Conditions across much of BC deteriorated throughout the day, when the worst of the “atmospheric river” hit, dumping up to 150 mm of rain within the Lower Mainland.

Flooding on the Stanley Park Causeway led to the brief closure of the Lions Gate Bridge early this afternoon.

The provincial government’s emergency response division has issued a rare flood watch for the Fraser Valley due to heavy rainfall in the BC interior and accelerated snow melt. Flooding, mud slides, and rock slides have resulted in the closure of several mountain highways, including serious impacts to the Coquihalla Highway.