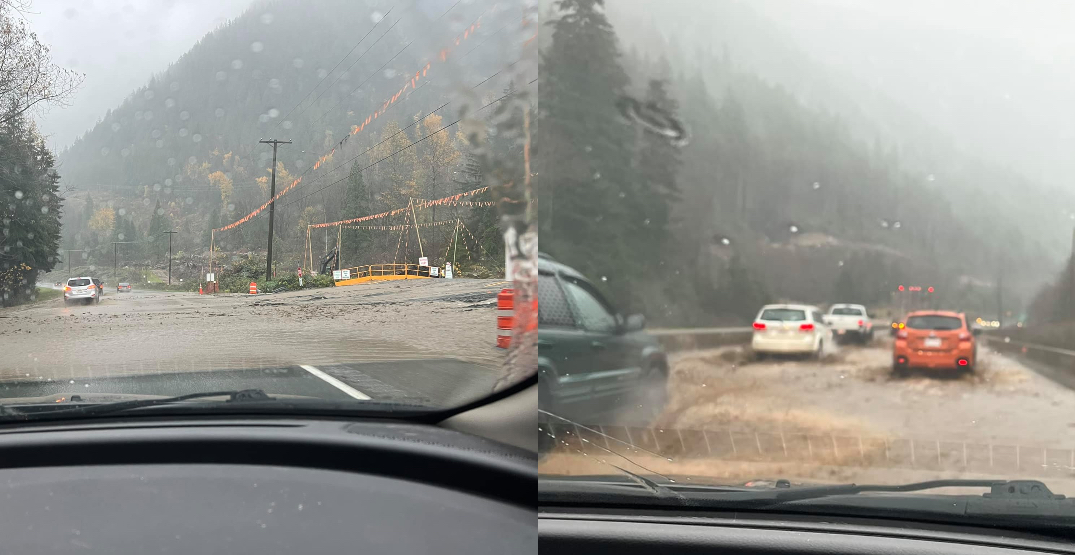 Mudslides and rockslides have closed major highways in Southern BC amidst heavy rain in the region.

On Sunday, November 14 several BC highways were experiencing closures due to rocks, flooding, and mudslides.

According to an update from Drive BC, BC Highway 5 is closed between Hope and Merritt because of a mudslide. As an alternate route, drivers are asked to try BC Highway 3.

As of 4 pm on November 14, there is no estimated time when the Coquihalla highway will reopen as they’re currently assessing the situation.

The mudslide is between Exit 202 and Exit 217. Drive BC will provide an update on Monday, November 15 around 12 pm.

CLOSED #BCHwy5 – Between #HopeBC and #MerrittBC due to a mudslide. Alternate route available via #BCHwy3. No estimated time of reopening, assessment in progress. Next update time at approximately 1:30PM PDT. #Coquihalla

Photos and videos uploaded to social media show the extent of the mudslide.

CLOSED #BCHwy5 – Between #HopeBC and #MerrittBC due to a mudslide. Alternate route available via #BCHwy3. No estimated time of reopening, assessment in progress. Next update time at approximately 1:30PM PDT. #Coquihalla #drivebc @DriveBC @511Alberta pic.twitter.com/MVP1QuZk5H

Some serious flooding/landslide on the #Coquihalla right now, near the Great Bear Snowshed. Highway 1 through the Fraser Canyon has already been closed due to a rockslide.
📸Video credit: Roger Fox📸 pic.twitter.com/OUAAUR5FnE

And this is the part of the highway that is still open! YIKES All my kids trying to get back to #kamloops from the coast rn! #coquihalla #merrit ⁦@KasiaBodurka⁩ ⁦@MMadryga⁩ pic.twitter.com/hSey0wq7dc

Meanwhile, on BC Highway 1, a rockslide and rocks on the road shut down the roadway in both directions. Drive BC is expected to deliver updates later in the afternoon.

REMINDER – #BCHwy1 CLOSED due to rocks on the road north of the Sailor Bar Tunnel. No detour available, assessment in progress. No estimated time of reopening.
Next update approximately 2:30pm.
More info: https://t.co/38bEM2o8fW#HopeBC #YaleBC

And closer to Metro Vancouver, a mudslide on BC Highway 1 has shut down eastbound traffic.

EASTBOUND CLOSED #BCHwy1 – Due to a mudslide between #HerrlingIsland and #BCHwy9. Crews are on scene, assessment in progress. Estimated time of reopening not available. Detour via #BCHwy9 and Bridal Falls Rd. #Chilliwack #HopeBC #Agassiz pic.twitter.com/xVtP8jzjAK

Then, in Abbotsford, flooding caused part of BC Highway 11 by the Sumas border crossing to close.

According to Environment Canada, the Coquihalla Highway from Hope to Merrit was expected to receive 60 to 90 mm of rain on Sunday.

Heavy downpours can cause flash flooding and water to pool on roads.

The agency warned that heavy rain and melting snow could create “challenging driving conditions due to water pooling on the roads” and reduced visibility.