There could be a new high-density neighbourhood with a major retail village along Cypress Bowl Road — the route ascending to Cypress Mountain ski resort.

The District of West Vancouver has entered a new phase of consultation on the refined concept for Cypress Village, located in a southeast parcel of the Upper Lands of the municipality.

A proposed master plan for about 3,700 residential units — up from the previous concept for 3,500 units — would allow for a total residential population of approximately 7,000 people at full-buildout by around 2045, achieved through multiple phases.

These homes would be built in a mix of low-rise and mid-rise buildings, as well as taller buildings between 15 storeys and 25 storeys. 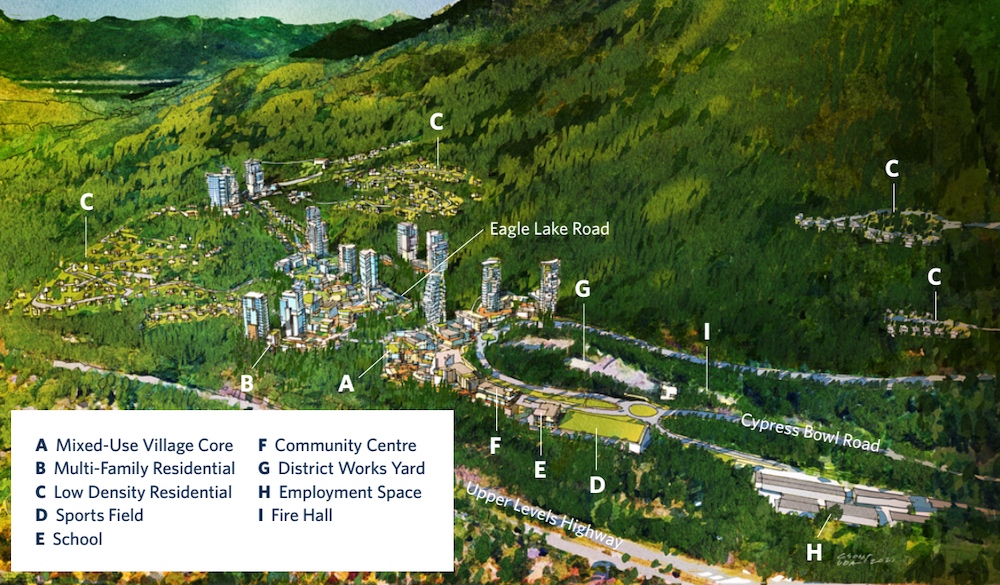 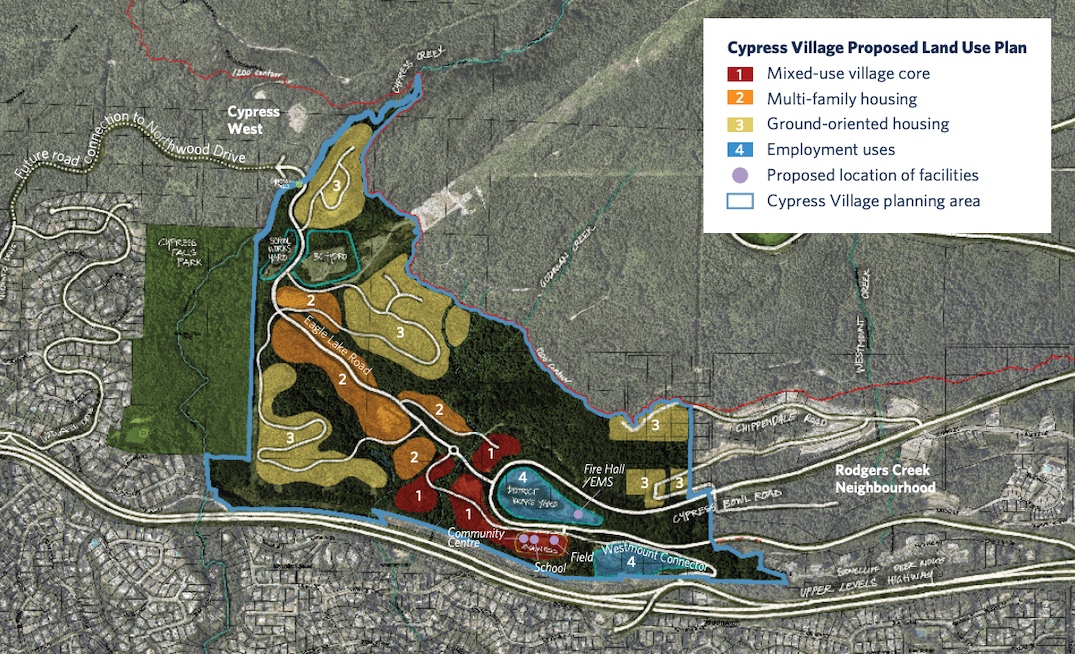 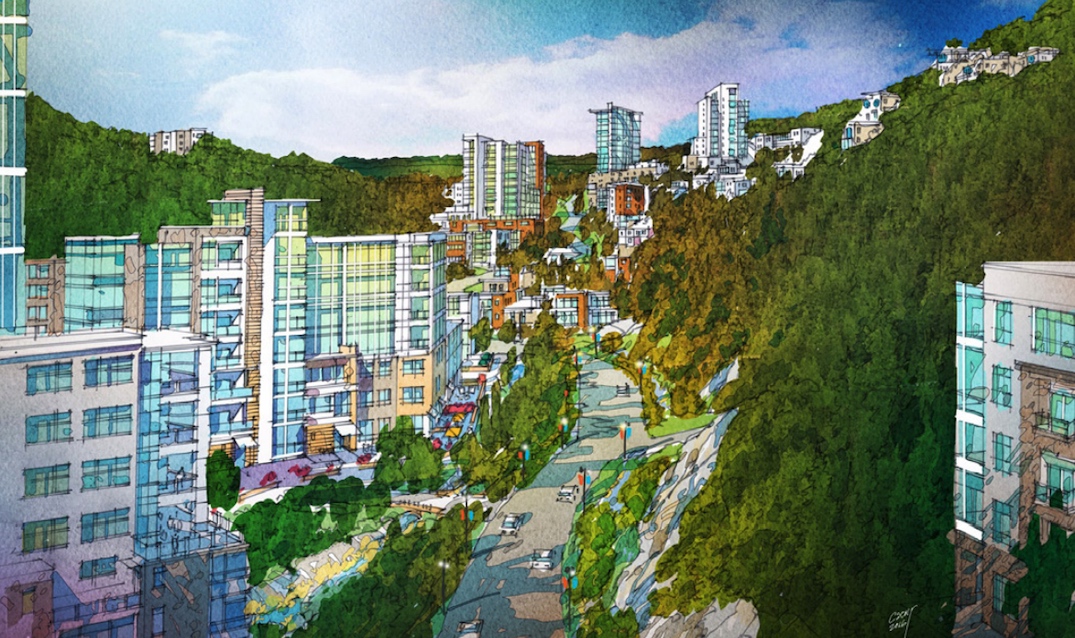 Such a level of density, achieved through height, is necessary to transfer the urban development potential of the 262 acres of the Eagleridge lands owned by British Pacific Properties (BPP) to Cypress Village. The Eagleridge lands further to the west, close to Horseshoe Bay, would instead be protected as a natural area for recreation and conservation, instead of the construction of a new single-family neighbourhood. Cypress Village, in effect, serves to limit suburban sprawl by being more compact.

The municipal government has indicated that its large district works yard site on Cypress Bowl Road, immediately east of Cypress Village, will not be included in the development plans, but a fire hall could be added on the site. 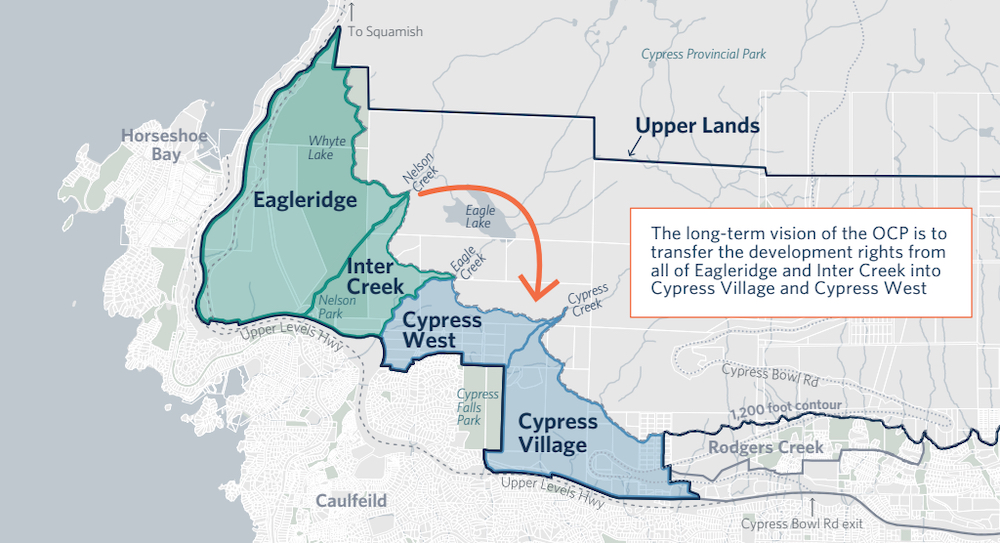 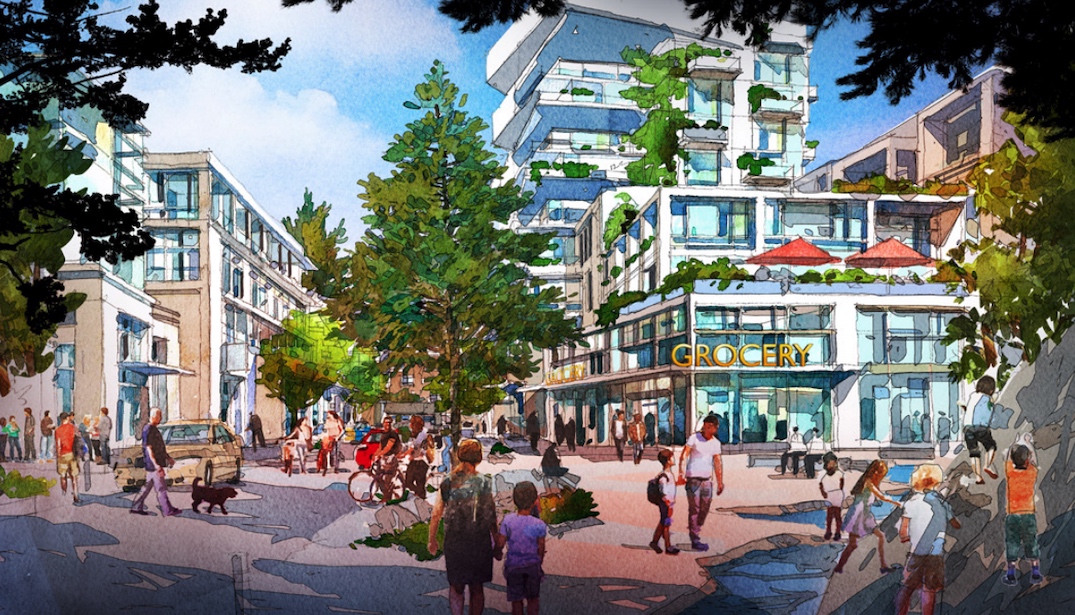 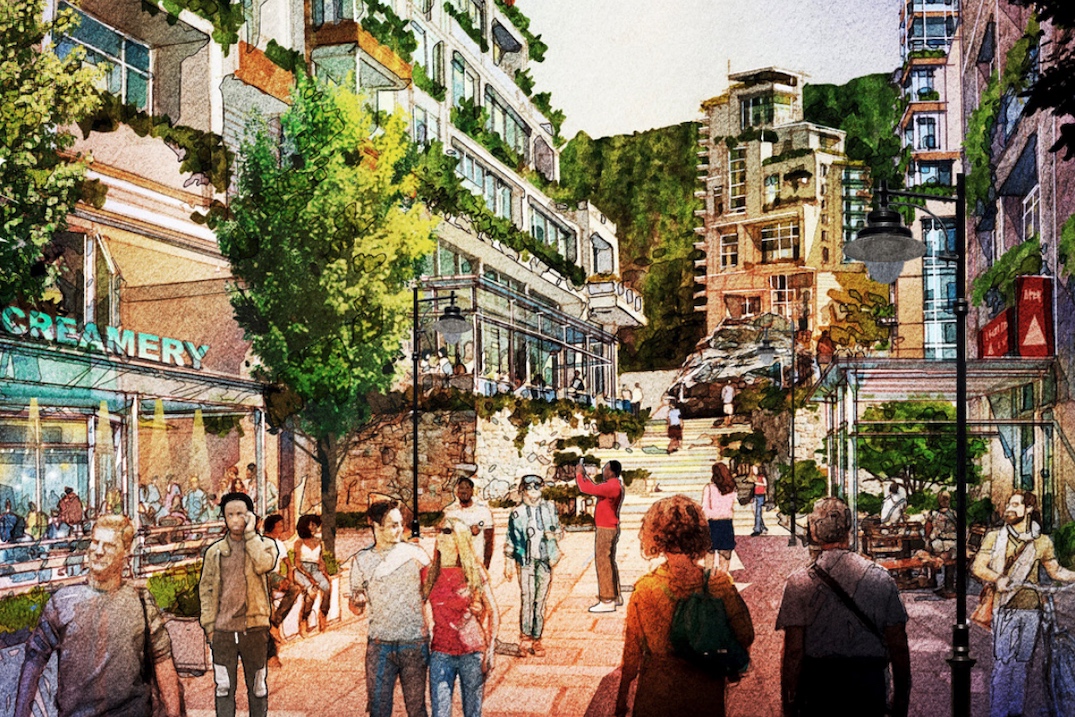 Residents of Cypress Village would be served by a significant pedestrian-oriented retail village with between 100,000 sq ft and 135,000 sq ft of neighbourhood-serving commercial uses, such as a grocery store, pharmacy, coffee shops, restaurants, medical clinics, banks, fitness gyms, and other basic services intended to reduce the volume of vehicle traffic generated out of the neighbourhood.

This village core could potentially also include an office building or a small hotel, given its close proximity to the ski resort.

A new 24,000 sq ft community centre at Cypress Village would be funded by BPP and operated by the municipal government. There would be a gymnasium, fitness centre, multipurpose rooms, and possibly a public library branch.

The community centre, proposed at a location near the village core and McGavin Field, would also have outdoor recreational facilities. It is also planned as an integral component for a public school, with the initial construction of a Kindergarten to Grade 3 elementary annex when there is sufficient enrolment. Eventually, as enrolment increases, a further expansion to the community centre could accommodate a larger elementary school for students through Grade 7. 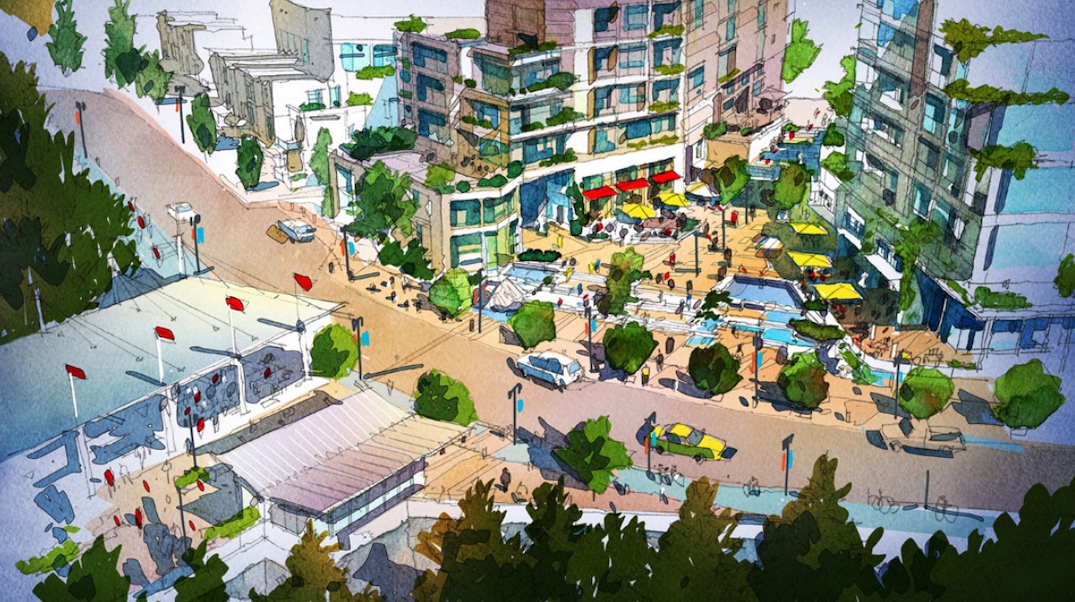 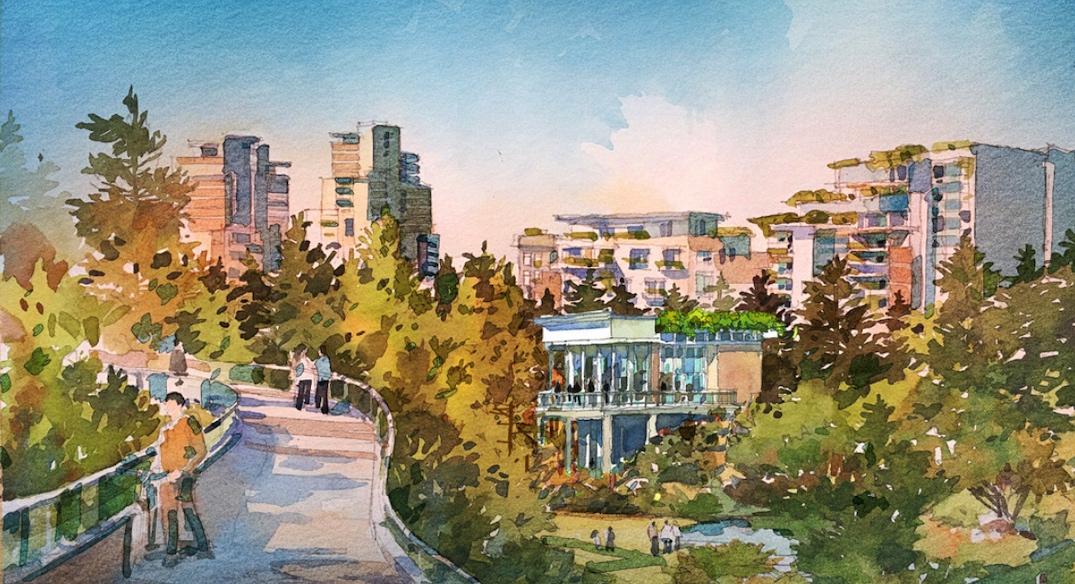 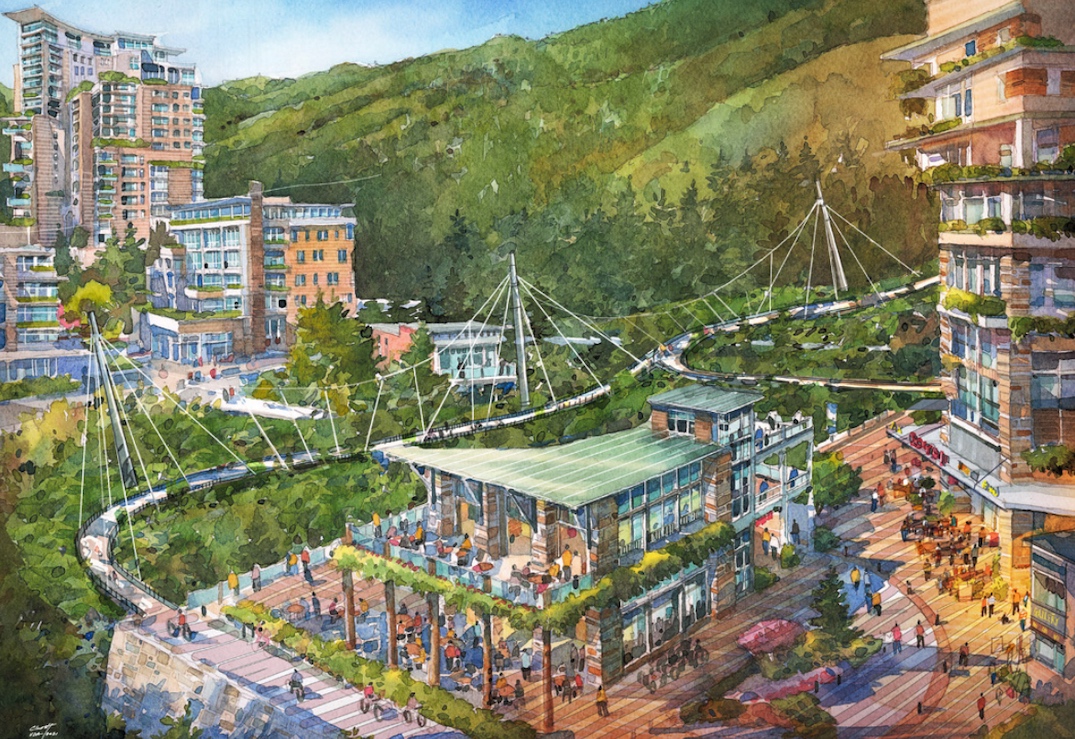 Multi-purpose pathways for pedestrians, cyclists, and rollerbladers are envisioned for Cypress Village, with consideration for designing pathways with gentler, user-friendly grades — accomplished in some cases by building elevated pathways. As well, new connections would be established to the mountain trail networks.

The central area of Cypress Village is proposed to contain about two-thirds of the housing units, where the terrain is flat or has gentle grades, and where walking distances to the retail district are 400 metres or less.

Vehicle access to Cypress Village from Cypress Bowl Road will be improved, and a third road access will be constructed from Upper Levels Highway’s Westmount Road Interchange. Cypress Bowl Road could potentially see an on-street bike lane or shoulder for cyclists to improve safety and mode separation on this increasingly important roadway.

For public transit services, BPP will privately operate and fund a bus service under TransLink’s Independent Transit Service framework, until passenger volumes are high enough for the service to be taken over by the public transit authority. 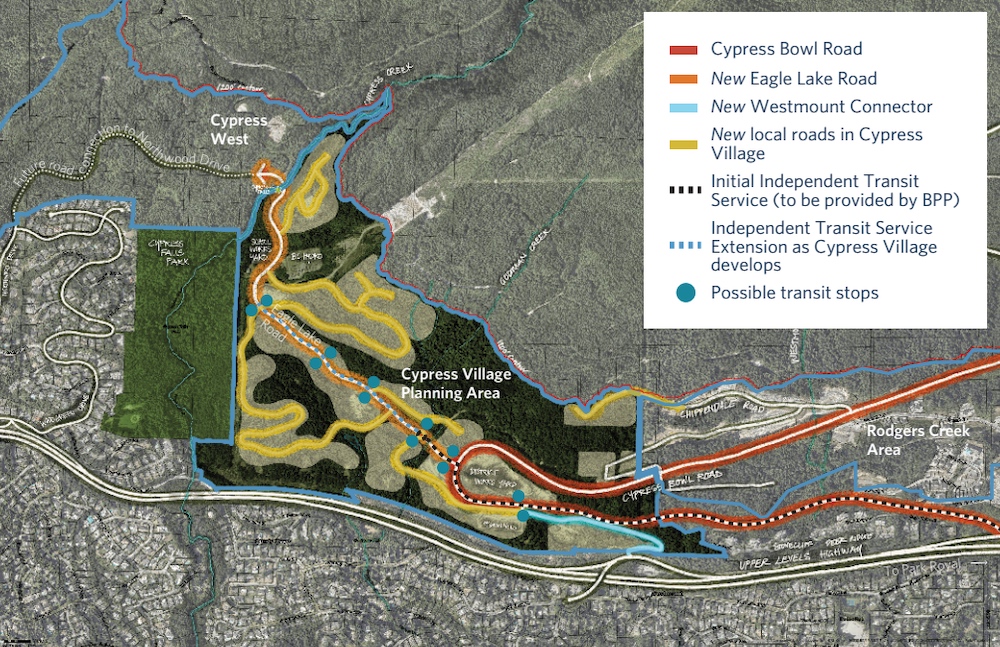 Early last year, the developer of the separate nine-acre Wentworth Lands development proposed setting aside a right-of-way for a future potential gondola public transit line from near the intersection of Marine Drive and 25th Street to Cypress Bowl Road Highview Lookout, which could potentially serve some of BPP’s Upper Lands populations. But a revised proposal for the Wentworth Lands removed any potential for a gondola. 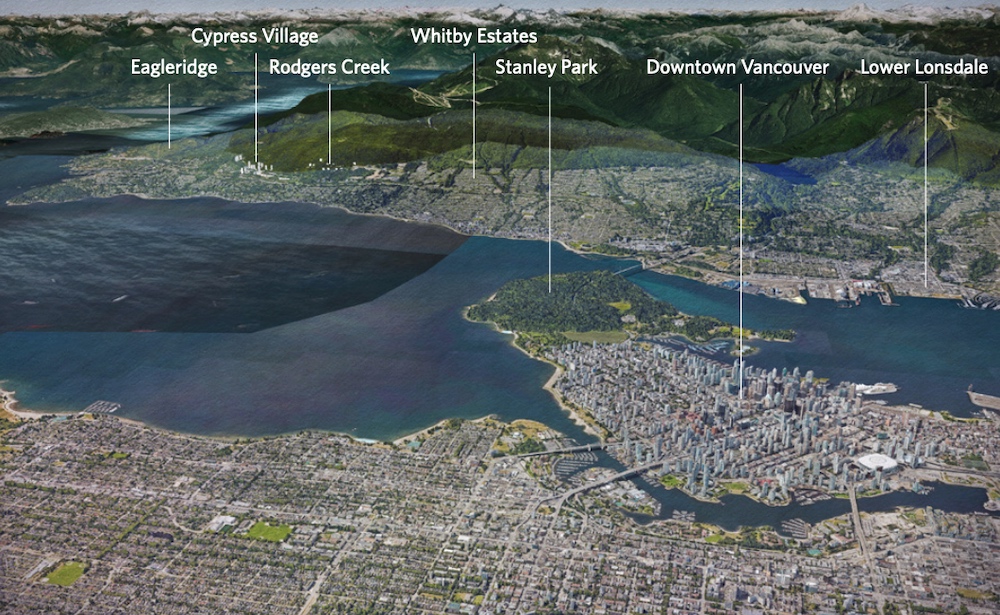 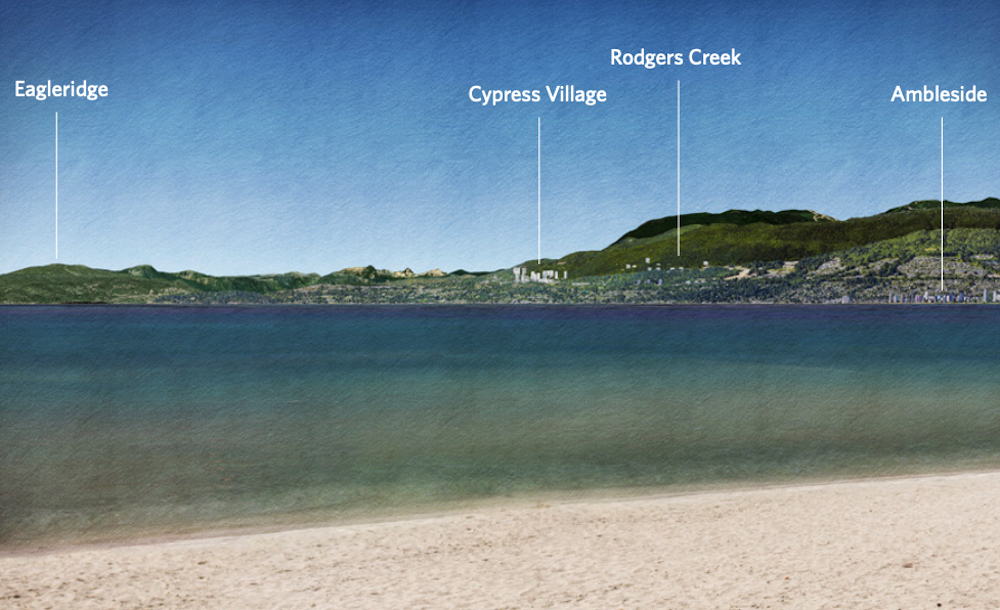