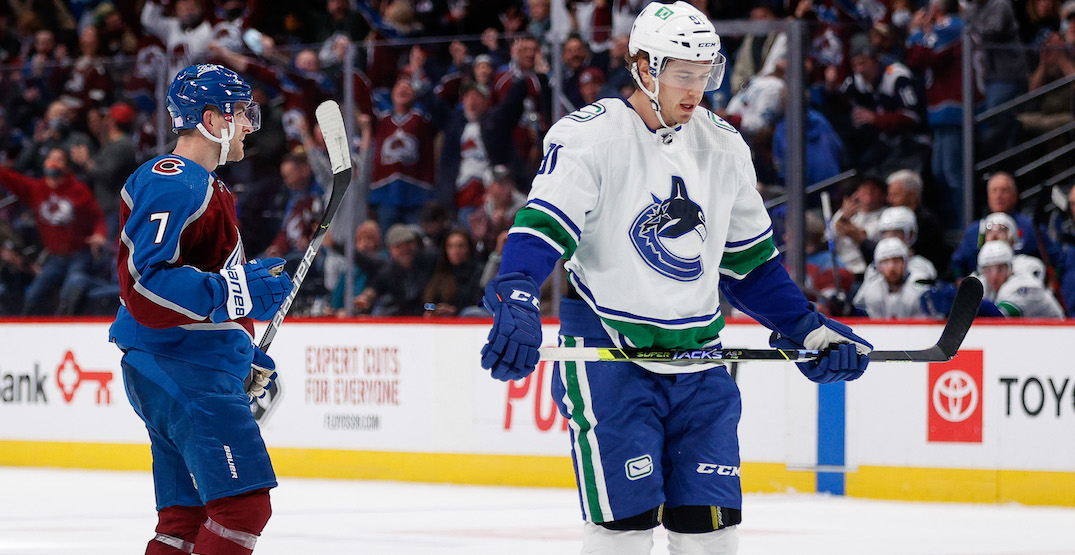 Not even 20 games into the 2021-22 season, and the Vancouver Canucks are already in crisis mode.

None of those are even the most obvious sore spot of this team.

Among all their issues, the Canucks’ inability to kill penalties is currently the Achilles Heel of this hockey club.

On Thursday night against the Colorado Avalanche, the PK was far from the only problem. That was an embarrassing, soul-sucking performance on many levels. It was almost an afterthought that the Canucks once again allowed two goals on three Colorado power plays.

The Canucks have killed off an atrocious 62.8% of their penalties this season. That’s currently the worst mark in the NHL. In fact, it’s historically bad at the moment.

Since the NHL started tracking penalty kill percentages, the worst mark over a full season was back in 1979-80, when the Los Angeles Kings only killed off 68.2% of their penalties.

It’s easy to say the Canucks penalty kill will even out, but will it?

How their defencemen have performed

General manager Jim Benning deserves blame for the defence he has constructed. In particular, two defensively-minded defencemen he’s brought in to help with the penalty kill have a long track record of, well, not being very good at killing penalties.

Tucker Poolman’s performance has been an unmitigated disaster. Among blueliners that average more than one minute per game shorthanded, Poolman’s 144.5 shot attempts against per-60 is worst in the NHL.

His inability to kill penalties isn’t an anomaly. With Winnipeg last season, Poolman’s 8.66 expected goals against per 60 was the worst mark among the Jets’ regular penalty-killing defencemen.

Travis Hamonic’s presence hasn’t been much help either. He’s been on the ice for four power play goals against in four games this season. Last season with the Canucks, his 7.73 xGA/60 was the worst among all penalty killers.

These two defenders were signed to be the Canucks’ stalwarts on the right side of the blue line. These were problematic signings based on how both players have performed on the kill in recent seasons.

It’s fair to wonder: did management really do their research on these players prior to signing them?

It only took until Game 14 for Poolman to be removed from the penalty kill completely. Both Quinn Hughes and Kyle Burroughs were trotted out shorthanded instead of Poolman in the game against the Avalanche, and that was before the 28-year-old defenceman took a boneheaded match penalty in the third period.

On the season, Oliver Ekman-Larsson and Tyler Myers lead the Canucks in ice time while shorthanded. Although they’ve played like an above-average pairing at even-strength, their performance shorthanded has been subpar.

Evidently, Ekman-Larsson and Myers have actually played better together rather than apart while shorthanded. Maybe that’s because the only other defenceman Ekman-Larsson has killed penalties with is Poolman.

Speaking of one of the Canucks most pleasant surprises, at this point, Burroughs should get a longer look on the penalty kill. In nine minutes shorthanded, he’s the only regular Canuck penalty killer not to be on the ice for a goal against.

Still, it’s hard to expect a guy who had five games of NHL experience to come in and save the penalty kill. The fact that he’s looked better shorthanded than the likes of Hamonic and Poolman has to reflect poorly on the front office that assembled this blue line.

Tyler Motte’s tenaciousness on the kill has been missed.

Among all Canucks forwards since the beginning of 2019-20, Motte’s 6.2 xGA/60 ranks only behind Justin Bailey, who’s only spent 15 minutes shorthanded.

Since 2019-20, Sutter is middle of the pack among Canucks players when it comes to expected goals and shot attempts against on the penalty kill. However, as the only right-handed centre on the team, there’s no doubt his ability to win faceoffs has been missed.

Tell that to Jason Dickinson, who’s been the Canucks’ most disappointing forward on the penalty kill so far. He’s been on the ice for 134.8 shot attempts against, which is worst among forwards on the team. Dickinson has also won only 23% of his draws while shorthanded.

His Faceoff percentage should haunt him too.

There are 209 NHL forwards that have played at least five minutes shorthanded so far this season. Among them, five of the Canucks penalty-killing forwards (Dickinson, Matthew Highmore, Bo Horvat, J.T. Miller, and Juho Lammikko) all rank in the bottom 50 for shot-attempts against.

Only Bailey, Tanner Pearson, and Justin Dowling have average shot-attempt against totals while shorthanded.

Unfortunately, relying on guys like Burroughs, Bailey, and Dowling to save your penalty kill is a desperate place to be.