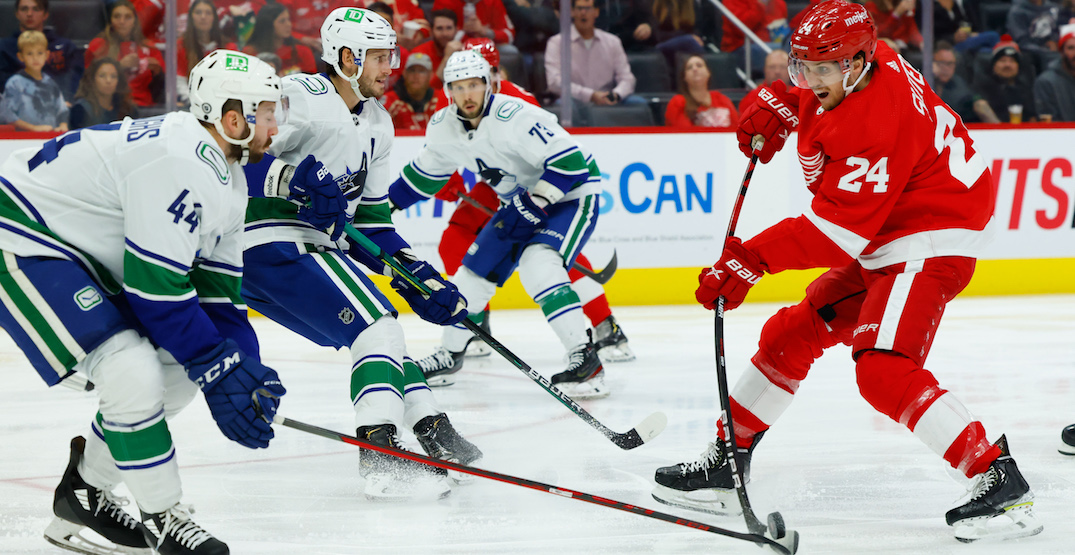 When the Vancouver Canucks signed 12 players on the opening day of free agency, Kyle Burroughs wasn’t one of the headliners.

With the additions of Luke Schenn and Brad Hunt, the 26-year-old Vancouver-born blueliner seemed destined to begin the season in Abbotsford.

Travis Hamonic’s absence created a gaping hole on the right side of the Canucks defence. While Schenn was the next man up on many people’s depth charts, Burroughs played a cleaner game in the preseason. Not only did he earn a spot on the team, but he also got his shot in the opening night lineup.

So, after seven seasons and 324 games of AHL experience, Burroughs now gets to live out his NHL dream while playing for his hometown team.

While Burroughs has been slowly eased into penalty-killing duty, his aggressive nature is clearly on display. Early in the season, he leads the team in hits (9) despite playing the fourth-fewest minutes (11:32 per game) on the team.

In the AHL, Burroughs saw his penalty minutes escalate as he shifted to a more “aggressive” style. When he made it to the NHL, he fought 6-foot-6 Nick Bjugstad with ease during his debut.

So far this season, Burroughs has been paired with rookie Jack Rathbone on the third pair. Despite the two defenders having a combined 13 games of NHL experience entering the 2021-22 campaign, they’ve given up virtually nothing in terms scoring chances against, albeit in sheltered minutes.

There’s no doubt that Burroughs paid his dues before earning an NHL opportunity.

He was one of the final players drafted (seventh round, #196th overall) in the 2013 NHL draft by the New York Islanders. After being drafted, Burroughs spent two more years with the Regina Pats before joining the Islanders AHL affiliate in Bridgeport for five full seasons.

Despite logging more than 300 games in the AHL, the Islanders never gave Burroughs a shot.

They eventually traded him to the Colorado Avalanche in 2020. After making their taxi squad, Burroughs made his NHL debut on April 21, 2021.

Hometown players aren’t always heroes, but Burroughs has shown leadership both on and off the ice throughout his hockey career.

The Vancouver native was captain of his junior team, the Regina Pats, for two seasons. Then, in 2018-19, he was named co-captain of his AHL team, the Bridgeport Sound Tigers, despite being one of the younger players on his team.

One of the reasons why Burroughs earned the honour of donning the “C” was because of his work in the Bridgeport community. In the AHL, each team selects a “Man of the Year” based on community contributions. Burroughs won the award two years in a row in Bridgeport.

Before the start of training camp, Burroughs also sought out advice from another fan favourite, Troy Stecher. It’s hard not to draw parallel’s between the two unheralded, right-shot defencemen who have both carved out a niche at the NHL level despite having the odds stacked against them.

Who knows how long Burroughs’ opportunity will last but after a solid start to the season, it looks like he may be here for longer than expected.