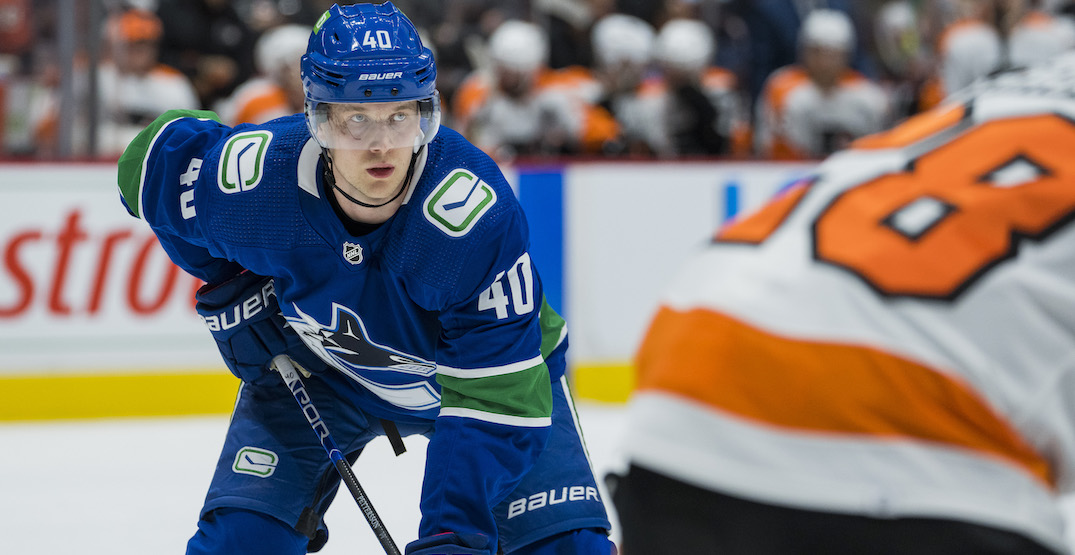 Heading into the season, there wasn’t much mystery about what the Canucks strengths and weaknesses were.

The defence looked like it would be a major issue once again, but the hope was that strong goaltending and a deep, dangerous forward group with lots of scoring potential would mask those problems.

That narrative has now been completely altered.

Through eight games, Vancouver’s defence has been about league average. That’s a big step up considering that over the past three seasons, the Canucks have given up the most scoring chances in the  NHL.

This season, they rank 18th in terms of scoring chances against. So far, the pairing of Oliver Ekman-Larsson and Tyler Myers has performed admirably against tough competition.

While the defence is holding up their end of the bargain, the offence has pulled a great disappearing act.

Not only has the threat of scoring evaporated, but the Canucks currently have the worst even-strength offence in the NHL.

While they don’t rank dead-last in goals scored, they do have the worst even-strength offence if you value the process over the results. Goals can be lucky, but you create your own luck by creating scoring chances.

In terms of scoring chances for and expected goals for, Vancouver ranks dead-last in the NHL.

Vancouver ranks last in expected goals for and scoring chances for a major disappointment considering their talent on offence. (Courtesy of Natural Stat Trick).

Let’s start with the good. The only reason that the Canucks aren’t last overall in terms of goals scored is because of their power play, which currently is in the top half of the league at 19.4%.

At even-strength however, this team has created next to nothing, especially when they’re in dire need of a goal.

Consider this. The Canucks have played 142 minutes at even-strength down by one goal. That’s last in the NHL by a wide margin. The next closest to the Canucks is Vegas, at 107 minutes.

Usually, when teams are trailing, they start to tilt the ice in their favour. The Canucks, however, are still losing the puck possession battle, even when they’re trailing.

Only six NHL teams are below 50% Corsi-for while down by one. One of them is the Calgary Flames, who have only trailed by a goal for less than three minutes this season.

It’s no secret that when you’re trailing, you should be ramping up the shot attempts. That’s what good teams like (blinks twice) the Buffalo Sabres do. They lead the lead with a 78% Corsi-for while trailing by a goal.

Which Canucks are the outliers at even-strength?

Not many Canucks boast positive possession metrics while down a goal, but a couple of players stand out for tilting play.

Only three Canucks have a positive scoring-chance differential while the team is trailing. Two of them are Myers and Ekman-Larsson. Not only has the duo been strong defensively, but they’re actually driving play as well when the team desperately needs offence.

Up front, Tanner Pearson and Bo Horvat lead the Canucks in terms of individual expected goals for. Horvat, in particular, leads the team with 10 scoring chances and two goals while trailing.

Canucks still waiting for the stars to show up

While the Pearson, Horvat and Conor Garland line have contributed half of the Canucks goals with the team trailing, there is an appalling lack of production from the rest of the stars on this team.

It’s no secret that the pressure should be directed in Pettersson’s direction. With the team trailing, Pettersson has generated just two shots in 55 minutes of play. Only Poolman has fired pucks on net at a lower rate while the Canucks trail.

When you realize that the #Canucks have only generated 2 shots on goal 5on5 with Elias Pettersson on the ice on this home-stand so far: pic.twitter.com/RG7LtaLQvf

Fans and pundits in this market can all keep saying Pettersson will be fine, and he likely will be. In the meantime, the Canucks are going to be hard-pressed to win games while he figures it out.

It’s also unfair to put all of the blame on Pettersson. The Canucks are 29th overall in expected goals-for while trailing, and 30th overall in scoring chances created.

Until this team plays with some urgency while down a goal, winning is going to be next to impossible.