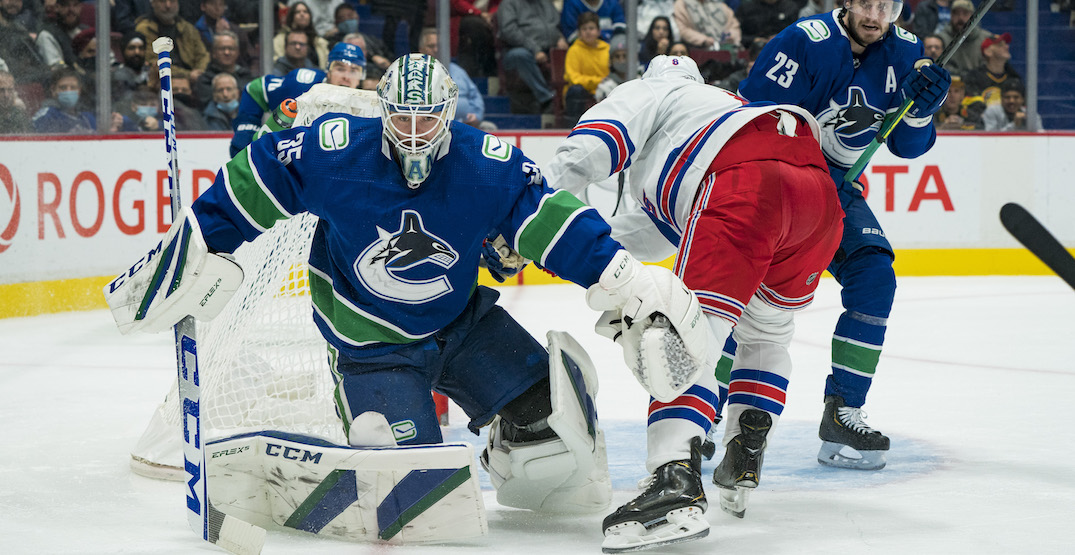 Not all heroes wear capes. Some also wear goalie masks.

The Vancouver Canucks comeback against the New York Rangers on Tuesday night would not have happened without Thatcher Demko’s heroics.

Making three miraculous saves in the dying minutes of the third period, he set the stage for J.T. Miller to win the game for the Canucks in overtime.

The win brought the Canucks record to 4-5-1 on the season, leaving Vancouver tied for sixth in the Pacific Division with the Los Angeles Kings.

It does make you wonder, where would they be without him?

The Canucks without Demko…

Although Demko was clearly the difference against New York, that wasn’t even his biggest robbery of the season.

His heroics were even more important in the Canucks’ win over the Seattle Kraken. At the end of their six-game road trip, the Canucks were incredibly flat for a large portion of the contest. By the end of the game, Seattle had out-chanced Vancouver 25-9 at even strength.

However, Demko made the comeback victory possible with a couple of incredible saves. The most notable was a breakaway save on Mason Appleton where he reached behind his back to pull the puck off the goal line.

Demko sweeps this one off the line to keep it tied after 2 periods 👀 #Canucks #SEAKraken pic.twitter.com/5IHy3lnjQK

Clearly, making miraculous saves is the norm for Demko in 2020-21.

Demko also stole the Canucks a victory in their game against the Chicago Blackhawks. The 4-1 score doesn’t tell the whole story, the Blackhawks did have 14 high-danger scoring chances at even strength, whereas the Canucks only had three.

Despite handily winning the high-danger chance battle, Chicago failed to score a goal at even strength.

That too was a game that the Canucks “needed” a result, considering they were coming off two straight losses to the Detroit Red Wings and the Buffalo Sabres.

Even after Demko stole three games for the Canucks, their 4-5-1 record is still bottom-10 in the league. What’s the narrative around this team if they’re 1-8-1?

The Canucks can thank Demko for preventing that ghastly record from being a reality.

The Canucks have been better defensively compared to previous seasons. However, they still sit 22nd overall in terms of high-danger scoring chances against.

That’s still an improvement, considering that they’ve allowed the most scoring chances against in hockey over the last three seasons.

Because the Canucks still struggle to prevent those high-danger chances against, Demko’s heroics have been a necessity.

The 25-year-old has 54 high-danger saves at five-on-five, which is tied with Robin Lehner of the Vegas Golden Knights for the league lead. Demko, however, has only let in seven goals on those shots. Lehner has allowed 15.

Why more heroics are needed from Demko

While Demko is busy stealing wins for the Canucks, he’s certainly not the only goaltender in the Pacific Division who’s been lights out.

Markstrom has six shutouts in 50 starts since joining the Flames last season.

Elsewhere around the division, James Reimer has the league’s second-best save percentage at .950. He’s won four of his five starts for the surprising San Jose Sharks.

Mikko Koskinen has also been solid for the Edmonton Oilers, and his .934 save percentage is better than Demko’s.

Until the Canucks prove that they can fix their scoring woes, they’ll be in dire need of more Demko heroics. That’s especially true with teams like Edmonton, Calgary, and San Jose creating some early distance from the pack in the Pacific Division.