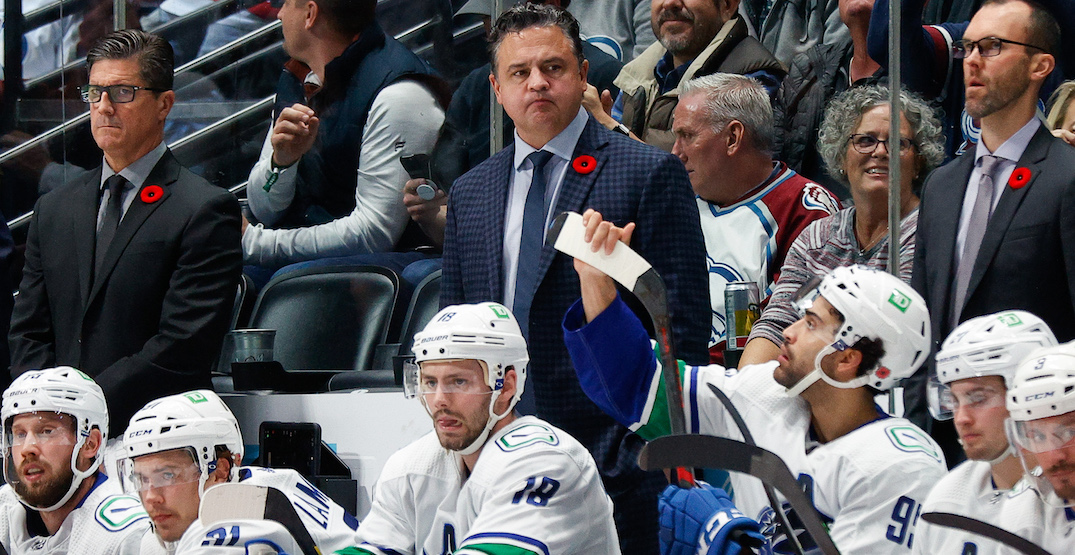 Whenever that happens, it’s never good news for the Vancouver Canucks.

There’s a lot of blame to go around right now, and certainly the pressure was ramped up further on the Canucks’ coach and general manager after Thursday night’s 7-1 loss in Colorado.

“We should be embarrassed,” Bo Horvat said after the game.

Yeah, they should be.

Excluding the expansion Seattle Kraken, only the Buffalo Sabres, Detroit Red Wings, Ottawa Senators, and Arizona Coyotes have a worse winning percentage than the Canucks since 2015.

After giving up a top 10 draft pick to shed three bad contracts and acquire Oliver Ekman-Larsson and Conor Garland last offseason, things were supposed to be different.

Management expected this team to be a playoff team. After winning just five times in their first 14 games, I would suggest they do not look like one.

Fans are not happy, and who can blame them?

Here’s a selection of what fans and media had to say last night.

you know what, I'll root for Colorado to score as many goals as necessary to ensure Benning gets fired by the end of the night pic.twitter.com/1kmc8DWAnt

Fire Green now. If the team doesn’t quickly start playing better under the next coach, fire Benning. It’s really the only way forward.#Canucks

Jim Benning has been at the helm for 2,730 days….and we’re still not good.

What the heck is wrong with the Canucks?

Congratulations to Langley B.C who lost power and couldn't watch the rest of the canucks game. #canucks

There’s nothing left to do but dig up

Disturbing effort by the Canucks.I hated this:Down 3-0 after one.Outshot 12-3. You had to think the Canucks would come out with emotion to start the second.Didn’t happen.Avs continued to dominate without McKinnon. Should be an interesting @DonnieandDhali Friday.See you at 10

A new coach in place might get more out of the players for a short period of time, but after 8 years, Jim Benning and the #Canucks mgmt are the elephants in the room.

Green didn’t assemble this team, they did. Accountability goes all the way up the ladder to ownership.

the canucks played what was generally considered to be their best game of the season and still lost in overtime to a very mediocre anaheim team. the coaching is a problem, but it's incredibly laughable to think it's the only problem.

(Twitter has limit on time so I had to trim some off of the upload.) pic.twitter.com/PghCWh59Vi