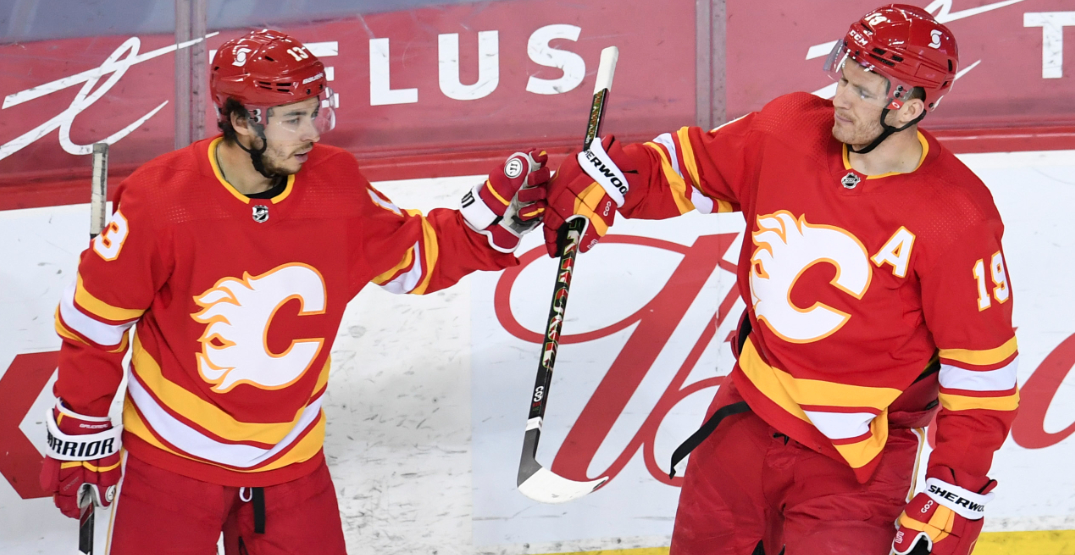 The old adage is to make hay when the sun is shining.

Darryl Sutter, of all people, probably doesn’t need to be reminded of that particular cliche.

And the head coach has his Calgary Flames doing just that, rolling to the tune of a 15-6-5 record that puts his squad atop the Pacific Division and two points off the Western Conference lead.

It’s important to carry that forward through the remainder of the regular season and throughout the Stanley Cup Playoffs.

Because next season is going to be a bit *ahem* tight.

Even with the bendiest of movements, the Flames are going to be bumped right against the cap with little flexibility to offer.

That is, assuming each of the following four wants to be back.

Johnny Gaudreau, who paces the Flames with 29 points (10G, 19A), is a pending unrestricted free agent at season’s end, free to test any and all waters outside the Calgary pond. He isn’t talking publicly about the future.

Matthew Tkachuk, third in scoring with 22 points (11G, 11A), is in the last year of a three-year pact that will keep him as a restricted free agent but will see his qualifying offer land at $9 million. He seems to be suggesting he’s happy to stay.

Andrew Mangiapane, who leads the group with 16 goals and is on the radar for Canada at the 2022 Beijing Olympics, is also a pending restricted free agent in the final season of a two-year, $2.45 million “show me” contract. He’s in line for a significant raise.

Even upstart defenceman Oliver Kylington, another Olympic hopeful after a surprising start, will be due for a modest increase. Kylington jumped the depth chart into a top-four role alongside Christopher Tanev, and an identical $787,500, one-year pact probably won’t do for the 24-year-old.

The jump in productivity is great for this season.

And, assuming everybody wants to be back long-term, some financial juggling will need to occur.

As it stands, the Flames have 12 players under contract for the 2022-23 season, at an obligation of $51.3 million. That gives Calgary six forwards, four defencemen and two goalies. That leaves roughly $30.2 million to navigate the signings of eight forwards and three blueliners, give or take the orientation Calgary plans on moving with.

Pending an extension at a lower cap hit, Tkachuk can re-up at that $9 million figure, leaving $21.2 million for 10 skaters.

A ballpark of Gaudreau at a similar $9 million figure — comparables range from Brady Tkachuk’s $8.214 million contract to Gabriel Landeskog’s $7 million deal to Jamie Benn’s pre-pandemic pact of $9.5 million — on an eight-year term is either too high or too low depending on who’s commenting, making it a starting point. It’d leave Calgary with $12.2 million for nine skaters.

Assuming the remaining five forwards, Mangiapane excluded, come in at an average of $900,000 via veteran and rookie contracts, that drops the space to $7.7 million.

Flipping over to defence, again without Kylington, and two additional rearguards are required. Re-upping Erik Gudbranson on a $1.5 million deal, likely a two-year offering, and having Connor Mackey at $912,500 to round out the seventh spot and spark competition with Juuso Valimaki leaves roughly $5.28 million.

That’s not enough to give adequate raises for the two pending restricted free agents.

Assuming Kylington gets a short-term “show me” deal in the neighbourhood of $2 million, and Mangiapane locks in a longer-term ballpark within the $6 million range, and the Flames are suddenly underwater. 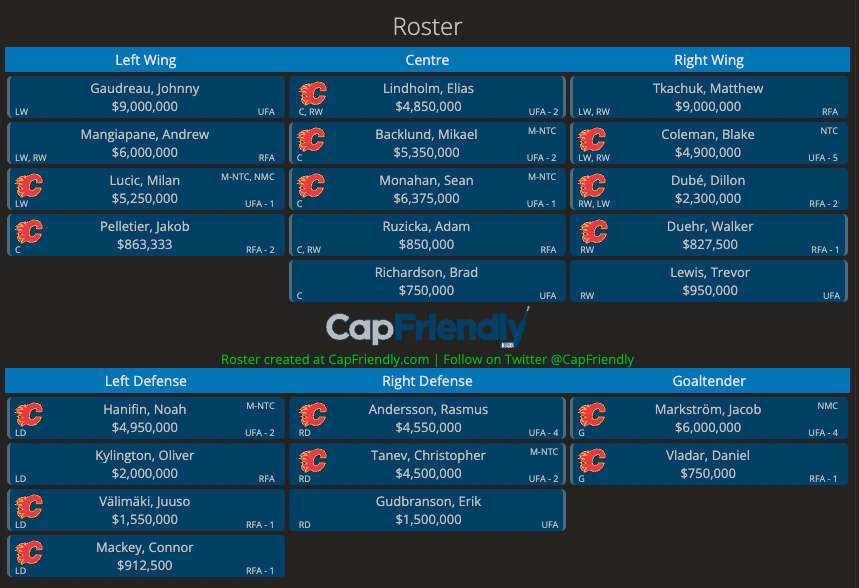 A buyout of Milan Lucic’s final year would get them close, but extending the cap charge into 2023-24 via that route isn’t desirable, nor is the fact that Lucic himself has been quite serviceable — albeit not to the tune of $5.25 million. He’s among the most popular on the ice and in the room, too.

Keeping Lucic around, all things considered, is probably the right path.

That leaves the unenviable option of trying to clear up space down the middle.

Calgary could try to find a new home for either Sean Monahan or Mikael Backlund.

Backlund, who remains the longest-tenured member of the Flames, has two years remaining on a $5.35 million average annual value. Monahan is wrapping up a six-year contract that pays him $6.375 million and will reach unrestricted free agent status in 2023-24. Each, however, has a modified no-trade clause and is a member of the team’s leadership group.

The wiggle room is non-existent. The options to cure it are almost as invisible.

And it’ll force the Flames into a decision.

Move forward without a high-profile piece, or move a different one out.

Bet the farm on this season.

And see what this year’s crop yields.