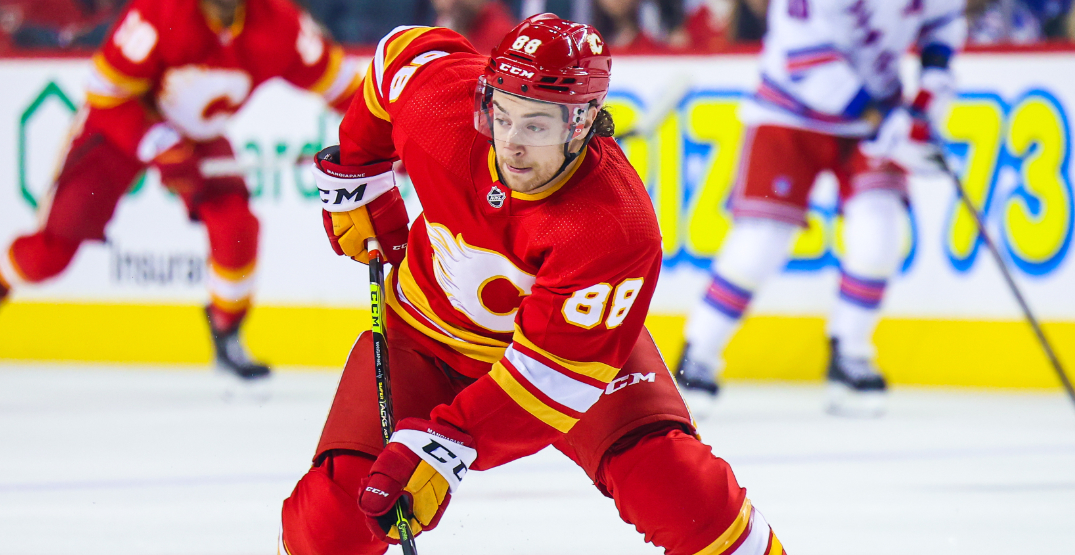 Long odds? Andrew Mangiapane is used to them.

He was undrafted into the Ontario Hockey League as a teenager before eventually signing on with Dale Hawerchuk’s Barrie Colts.

He was passed over in his first go-round at the NHL Draft before putting up a 96-point season en route to being plucked by the Calgary Flames a year later in his 19-year-old season.

Now he’s got 190 National Hockey League games to his credit.

Mangiapane is on the long list of roster candidates to suit up for Canada at the 2022 Winter Olympics in Beijing.

But he’s in the conversation, at least.

“It was an honour to get a call and just say, ‘Okay wow, they’re actually looking at me, because I was never selected to do anything with Team Canada,” Mangiapane told Postmedia’s Wes Gilbertson.

The invite isn’t just an extended courtesy, though.

And there’s a case to be made, as much of a dark horse as he is.

Understandably, Mangiapane doesn’t have a lot of experience on the international stage. But what he has is fresh in the memory banks of Hockey Canada. And it’s no small feat.

The 25-year-old winger jumped into action in Latvia to turn around a winless Canadian entry, scoring seven goals (and adding four dishes) to pace Canada to a gold-medal finish at the 2021 IIHF World Championship last spring. They weren’t garbage-time goals, either. Among his seven snipes were game-winners in both the quarterfinal and semifinal elimination games.

Not surprisingly, he was named tournament MVP in his only international action — at any level — to date.

Only two Canadian-born players have outscored Mangiapane at 5-on-5 since the start of the 2019-20 season: Connor McDavid with 44 and Brad Marchand with 38.

Safe to call McDavid and Marchand locks. Mangiapane and his 38 tallies? Not so much. Yet.

Mangiapane drops to No. 23 on the list when factoring in goals at any strength, sandwiched around the likes of Zach Hyman and Claude Giroux. With 15:05 of average ice-time per game, Mangiapane averages less action than anyone slotted in the top 49 among all scorers, with only Jared McCann, at No. 50, averaging south of the 15-minute mark with a 14:54 figure.

Mangiapane came out shooting to start the season with seven snipes in six skates. He, and teammate Elias Lindholm, briefly paced the NHL in goals as a result.

Netting his eighth in a 4-1 loss against the San Jose Sharks on Tuesday, Mangiapane sits in a share for third among Canadian-born skaters in the show. Only McDavid and Tyler Bertuzzi of the Detroit Red Wings have more.

Is it enough to launch Mangiapane alongside the already-named McDavid, Sidney Crosby, and Alex Pietrangelo, and the other virtual locks to board a plane in February?