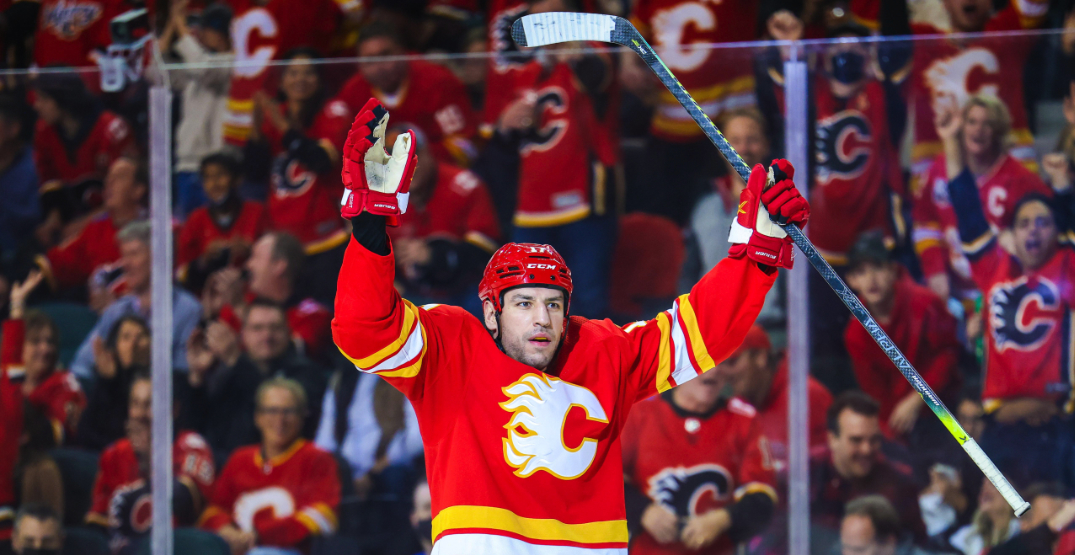 Milan Lucic has been a scoring machine this season, relatively speaking.

And Calgary Flames fans are loving it.

Lucic scored again in a 3-2 win against the Los Angeles Kings on Thursday, giving him seven goals on the season and placing him in sole possession of fifth on the team in twine-ticklers.

He’s got a healthy 21.9% shooting percentage, and six of his seven goals have come at even-strength — slotting him among the NHL’s top-50 in 5-on-5 goals.

Lucic is ahead of some impressive names, and Flames followers are letting the rest of the league know it.

Like the Edmonton Oilers for example, Lucic’s former squad.

Milan Lucic has as many goals as Jesse Puljujarvi.

Lucic is knotted with Jesse Puljujarvi with seven tallies, with both sniping six skating at evens. It’s a pair higher than the feisty Kailer Yamamoto and three more than Zack Kassian.

Lucic would share the hypothetical team-lead on the Montreal Canadiens with Josh Anderson. He would slot ahead of offensive talents Tyler Toffoli, Mike Hoffman and Nick Suzuki.

It’s not just Canadian teams taking it from Lucic supporters, either.

In individual tweets, fans took aim at Taylor Hall of the Boston Bruins, Patrick Kane of the Chicago Blackhawks and even Elias Pettersson of the Vancouver Canucks.

@27MilanLucic can. Lucic for Debrusk, any takers? Looch has more goals that Taylor Hall 😂

Milan Lucic has more goals than Patrick Kane. Think about that for a second. @InTheDomePod pic.twitter.com/EsnKqOGMI2

Heading into action Friday, Lucic finds himself tied with the likes of Vladimir Tarasenko of the St. Louis Blues, Gabriel Landeskog of the Colorado Avalanche, Brayden Point of the Tampa Bay Lightning, and Claude Giroux of the Philadelphia Flyers.

Dallas Stars forward Tyler Seguin is behind Lucic at six goals, as is Nikolaj Ehlers of the Winnipeg Jets.

Mathew Barzal of the New York Islanders and Brady Tkachuk of the Ottawa Senators each has five.

In all, Lucic is on pace for 25 goals this season.

Had he not been so generous, Lucic could be trending towards 29 goals.

And while Lucic isn’t likely to push either pace over a full 82-game campaign, it’s not going to stop fans for pulling for the “Power Five.”