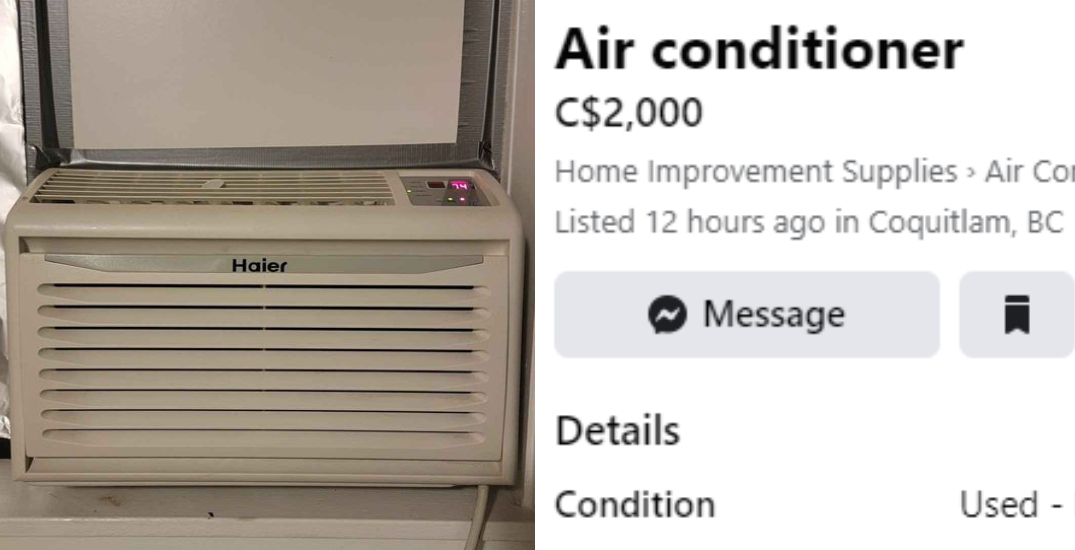 British Columbia’s heat wave has pushed the price of air conditioning units to a premium.

Before the heat set in on Friday, only about 40% of the province had AC in their homes. Cue a weekend of record-breaking temperatures, and that number has no doubt skyrocketed.

Stores across Vancouver have been ransacked by roasting residents.

Canadian Tire’s stock of AC units has been depleted; those still available at The Home Depot won’t ship for over a week. Good luck finding a fan at Walmart.

With the heat wave expected to stick around until at least Wednesday, overheated buyers have taken their search to Facebook Marketplace.

And sellers are willing to meet the demand — for a cool price.

Portable units that would fetch an average of $500 are being sold for $800. Several sellers have jacked the price up to $1,800.

With beaches closed, temperatures rising, and the majority of the province under a heat warning, there may well be some expensive sales made before the heat wave ends.

Of course, there are still some cheaper options available that will cool you down while ensuring you can still afford your rent this month.

One ingenious “air conditioning alternative” claims to cool a 350-foot room better than a 12,000 BTU air conditioner, and only costs $100. Plus, it comes with a free lemonade.