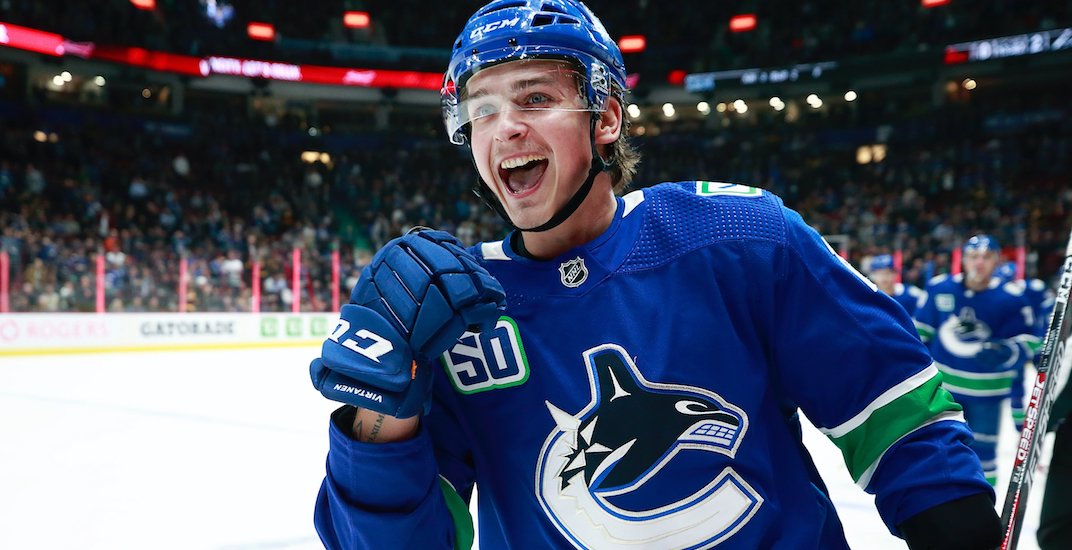 Flash back to the first day of training camp in September.

Instead of skating with most of the players who would eventually suit up for the Canucks on opening night, Jake Virtanen was skating with career-AHLers in Group C.

Green hinted that Virtanen came into camp out of shape, and many fans were ready to turn on the 23-year-old Abbotsford native. 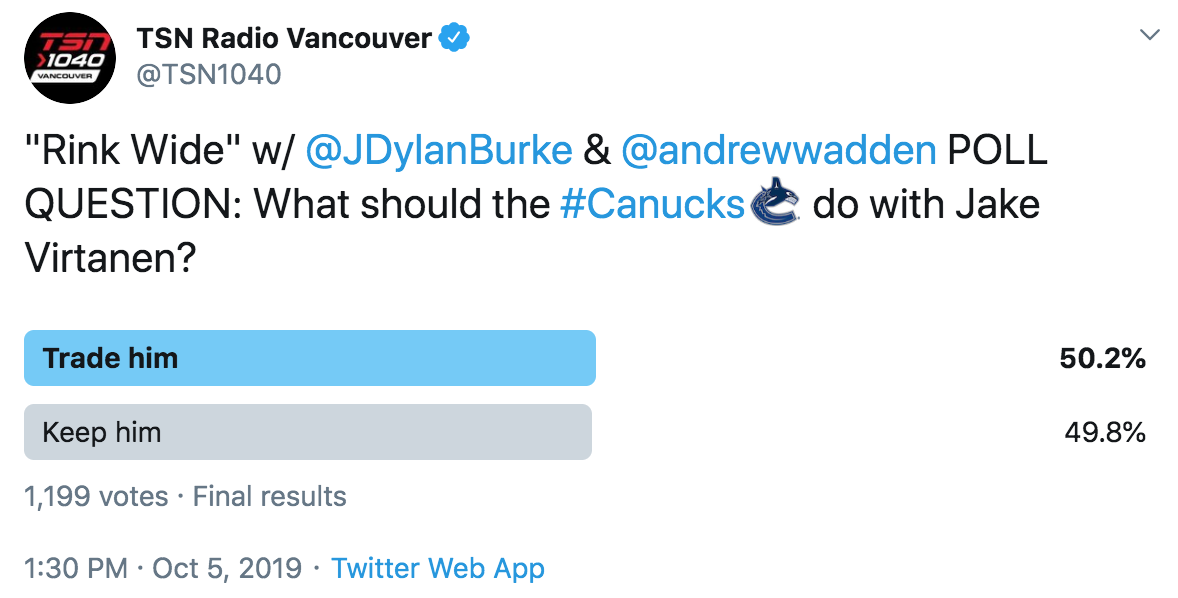 “I’m not going to be all pissy about it,” Virtanen told reporters at the time. “Just going to have to work hard.”

And full credit to the fifth-year pro, because he’s proving his worth with the Canucks this season.

A sixth overall draft pick in 2014, Virtanen has had to deal with a lot since making his Canucks debut in 2015. The spotlight shines bright on any first-round pick, but the pressure gets ramped up even more for a struggling prospect on a losing team.

And while there probably isn’t much he’ll ever be able to do about the comparisons to William Nylander and Nikolaj Ehlers, Virtanen is silencing many of his critics this season.

And he’s earned it.

Virtanen didn’t start the regular season in Utica, but he did begin on the fourth line with Jay Beagle and Tim Schaller. He played fewer than 10 minutes five times in the first two months of the season, including a season-low 7:59 on November 1, and averaged just six seconds per game on the power play.

He was a spare part.

Fast forward to Thursday night at Rogers Arena: not only did Green start Virtanen on the top line with Elias Pettersson and J.T. Miller, but he also made his coach look smart for doing so. He got a fortunate bounce, but Virtanen showed patience on the winning goal, scoring on a wraparound.

Virtanen set a new career-high in points (26) against the Coyotes, and his next goal will tie his career-high in goals (15). Barring an injury, this will be a career year for Virtanen who is now on pace for 24 goals and 44 points.

Yes, Canucks fans are getting to shotgun beer on the regular this season.

And while I don’t condone his elbow to the head of Winnipeg Jets forward Mathieu Perreault, isn’t it kind of nice to see Virtanen pissing off a player on an opposing team?

What’s most impressive with Virtanen is his even-strength scoring. Only Pettersson has scored more goals than Virtanen at even strength for Vancouver this season, which is remarkable given he hasn’t been a fixture in the team’s top six forwards.

But he’s been good on the man advantage also, ranking behind only Miller in power play points (5) and first in goals (3) on the team since December 1.

Will it last? Virtanen’s shooting percentage (14.6%) is higher than last year (9.7%), but if he keeps getting looks with Pettersson or Bo Horvat, as well as second-unit power play time, I wouldn’t bet on the well drying up anytime soon.

Not many people saw that coming after Day 1 at training camp.

Canucks have a new No. 1 defenceman

Alex Edler has been the Canucks’ top minute-munching defenceman for the better part of a decade. That appears to be changing, as Quinn Hughes continues to gain more trust in his rookie season.

An excellent skater, Hughes is particularly helpful when playing against speedy stars like Taylor Hall and Connor McDavid, who always seem to give the Canucks fits. In each of their last games against the Coyotes and Oilers at home, it was Hughes, not Edler, getting the majority of the McDavid and Hall assignments.

Rogers Arena is no longer a library, and it appears to be paying dividends for the Canucks this season. They’re 15-5-3 when they play at Rogers Arena, good for the fifth-best points percentage (.717) in the league.

Green should be in the All-Star Game too

Speaking of points percentages, the Canucks now have the best percentage in the Pacific Division after their win against the Coyotes.

Hours before Thursday’s game, the NHL announced that Rick Tocchet would replace the recently fired Gerard Gallant as Pacific Division coach at the All-Star Game.

Really, that spot belonged to Green.

The Canucks were in second-place in points percentage, behind the Vegas Golden Knights, when the league announced the All-Star coaches on January 3. So if Gallant couldn’t go, why not give it to Green instead of picking a new arbitrary cutoff?

If the NHL really wanted to make it interesting, they would have announced the winner of the Coyotes-Canucks game would get to send their coach.

Canucks fans will settle for seeing three of their players (Pettersson, Hughes, and Jacob Markstrom) go to the game instead.