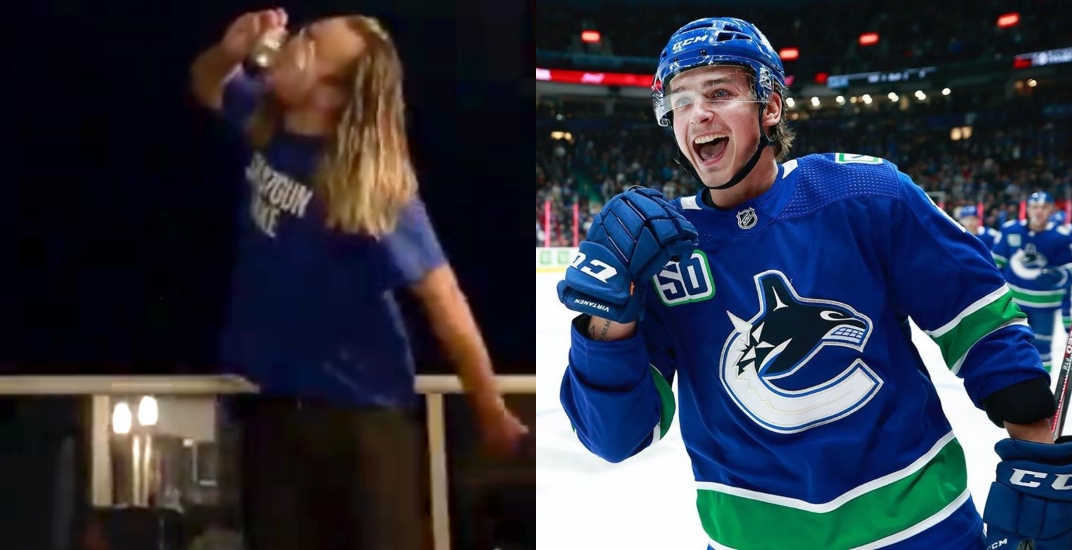 That’s a pretty good summation of the Shotgun Jake movement, which is still going strong this season. Those are also the words of Eli Wiebe, a 29-year-old Canucks fan who has become the unquestioned king of shotgunning beer in Vancouver.

#ShotgunJake mixes in another bingo and keeps the guns firing!!👍🍺💨 8/20 pic.twitter.com/vA0gPQEXPg

You know him as Dweeb on Twitter, and his shotgunning has become the stuff of legend, so much so that people literally couldn’t believe he was finishing cans of beer so quickly (more on that later).

Daily Hive caught up with the generational shotgunner to find out more about his journey to the top.

It likely won’t surprise you that Wiebe, whose day job involves putting water mains in the ground for the City of Delta, perfected his beer-crushing craft while in university.

He makes it look easy, which it’s not, as his friend illustrates here:

An ex-hockey player, Wiebe played four seasons with the Richmond Sockeyes before moving on to play at the University of Victoria for three years.

“Now I’m just a beer league fan of the Canucks that has showcased a skillset that I kind of mastered in university,” he told Daily Hive after Monday’s game.

The speed at which he shotguns isn’t the only thing that’s amazing about Wiebe’s form. The can crusher doesn’t need a sharp object to puncture a hole; instead, he uses his thumb.

He first became enamoured with the technique seeing it done on Snapchat. That’s when he took to YouTube to see how it was done.

After trying it over and over without success, he popped open a hole. The key was getting the right angle with the edge on his nail, he says.

“It was just the repetition of just regular shotgunning from being on a university sports team and partying a lot and having fun.”

The Shotgun Jake craze began last season when TSN 1040 radio hosts Jason Brough and Mike Halford came up with the idea. It was meant as a way for fans to encourage Virtanen on his way to scoring 20 goals, which was boldly predicted by Brough in the summer.

A loyal Halford and Brough listener, while driving around in his truck for work, Wiebe immediately concluded, “This was up my alley for sure” and figured it was “something that I personally think would motivate a guy like Jake Virtanen.”

As luck would have it, Virtanen scored in the third period of a 5-2 Canucks win in the first game of last season, cueing an internet sensation.

Wiebe was in Mexico at the time, but he still made sure to participate:

Virtanen would score 11 goals before Christmas but a scoring slump and an injury kept him to 15 goals on the season.

Halford and Brough didn’t actively promote Shotgun Jake before this season, but the movement belongs to the people now. After taking nine games to score his first of the season, Virtanen now has three goals in three games, and Canucks fans are still thirsty.

That’s 3 guns in 3 games. This kid is really starting to elevate his game. 👍🍻 #Canucks

Safety PSA: in the event of an actual fire, remember to use the stairs.@HalfordTSN @JasonBroughTSN pic.twitter.com/IQVPSCE1Sx

“I think for someone like Jake who’s young and still finding out how to be a pro, I think this is tickling a certain kind of itch for him.”

There’s extra pressure on the Abbotsford native, who has been heavily scrutinized as a No. 6 overall draft pick by the Canucks in 2014.

“More than anything, I think it can turn it into just a positive to just cheer for Jake… for him to be able to have something in his hometown that is encouraging for him, people wanting him to succeed, I think is definitely good.”

Virtanen now has three goals in 11 games, putting him on pace for 22 goals.

Fame is not without its drawbacks, which Wiebe can now attest to.

His followers on social media have more than doubled since the initial video he posted last year, but this season some non-believers have crept into his timeline.

Ever the showman, a lot of thought goes into Wiebe’s effort to entertain his fans.

“The one thing I’ve kind of learned is if he’s going to score 20 goals, start on the smaller scale of things. Don’t try to go for the top too quickly because there needs to be some variety in videos. So you need to basically have some things left to do later on.”

He’s done that so far this season, involving his girlfriend last week. They appear to be a match made in heaven:

#ShotgunJake gets his second goal of the season on a beautiful pass from Bo!

But for the first goal of this season, Wiebe kept it simple.

After replay confirmation, #ShotgunJake mixes in his first of the year on a pass off the defender!! 😂🤷‍♂️

Could be doing a lot more of these this season if Jake continues to ride shotgun with Bo. 👍🍺1/20 #Canucks @HalfordTSN @JasonBroughTSN pic.twitter.com/audl6Qr106

Except he was too fast. Some people began accusing him of not finishing his beers.

“When I do one as quick as I can, it goes really quick,” Wiebe explained.

The next day it became a topic of discussion on the radio.

“It’s like 9 am, I’m at the work site and I’m getting texts from my girlfriend and a couple buddies being like, ‘Oh man, they are kind of raking you over the coals on the radio right now’ (Halford and Brough were reading messages from the accusers).”

Such a preposterous accusation needed to be dealt with swiftly, leaving no doubt who the real shotgun king was.

“The written word is just not how I’m going to be able to deal with this,” Wiebe said to himself before posting this emphatic response after he got home from work:

“To be fair in this whole Shotgun Jake community, there’s a lot of spilling…when you’re making videos, the odd little bit of beer is going to fall out or do whatever.

“That’s not what this whole thing is about. It’s literally about just supporting Jake and supporting the Canucks and cheering for our team.”