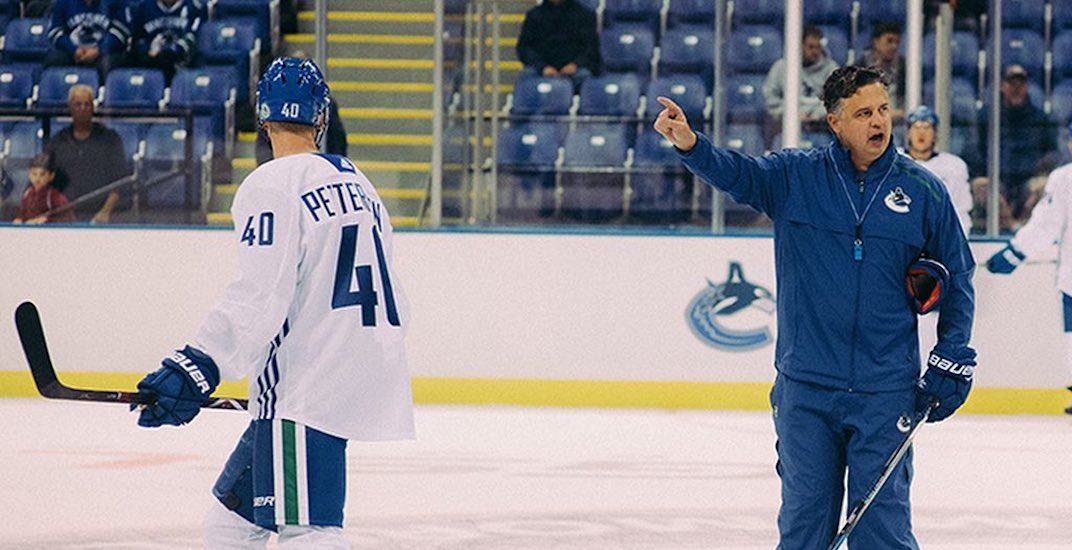 The Vancouver Canucks’ head coach treated Virtanen like an AHL journeyman during the first day of on-ice sessions at training camp in Victoria.

Virtanen didn’t skate with a single player expected to make the Canucks’ opening night lineup, relegated instead to the third group.

Most are speculating that Virtanen came into camp out of shape, though Green refused to provide details for his decision, only saying that there were “goals” that weren’t met.

“There’s certain expectations that he wanted to reach and I wanted him to reach,” Green told reporters. “We both agreed that there were goals that had to be met and that if he didn’t reach them he probably wouldn’t be with the first two groups on the first day of camp. There’s nothing more than that.”

Green always puts players through a grueling first day of camp, and that was no different on Friday, skating many of them to the point of exhaustion. He was mostly pleased with the results.

“This is the best year we’ve had for conditioning,” Green said. “Even our young guys came in and are in phenomenal shape. It’s good to see. We put a high emphasis on conditioning.”

Elias Pettersson clearly came to camp in great shape, with Green saying “it looked like he was on a mission” to lead his group.

The bag-skate caused Troy Stecher to puke, as the defenceman pushed himself to the limit for the fourth year in a row.

We have an official ruling: Troy Stecher did, in fact, puke again after first bag skate of camp.#4for4

Virtanen, on the other hand…

Guys… Jake is struggling, I don't think I saw another player need water during the bag skate all day. pic.twitter.com/ehZ4UU15yr

“I’m not gonna be all pissy about it,” Virtanen told reporters. “It is what it is. I’m just gonna work hard.”

While clearly Green isn’t happy with the 23-year-old winger, he says he’s not giving up on him.

“Jake and I have had lots of conversations over the years. Met a few times over the summer and at the end of the season. And Jake wants to be better as well, and wants to progress as a player. I want him to take a step, even start to become a leader on the team.”

Green says he’s looking for more consistency from Virtanen, adding that he was at his best for only about half the games last season.

“I’ve got a lot of hope for Jake to be a real good player for our team. I thought he took a step last year. It’s our job to develop players still and make sure that he progresses and helps our team win down the road.”

“I know camp can be hard at times, but let’s embrace it and know it’s going to make you better.” Coach Green sets the bar as #Canucks Training Camp opens in Victoria.

Camp is presented by @TD_Canada pic.twitter.com/braH9ISc5Z