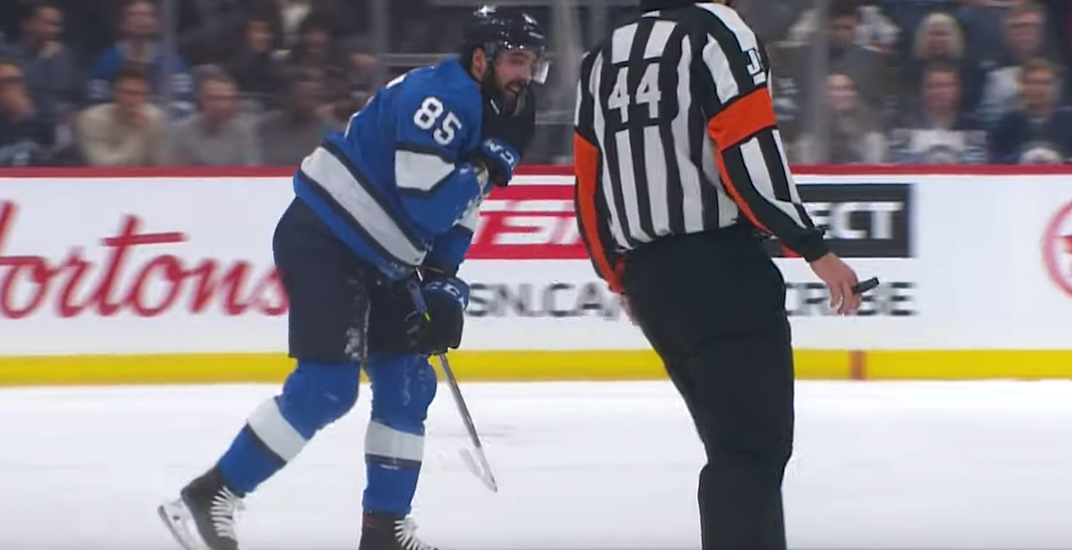 Perreault is incensed that Canucks winger Jake Virtanen did not receive a suspension for an elbow he threw in the first period of Tuesday’s game in Winnipeg.

And he has a very legit reason to be angry.

“This is an elbow to the face to a guy that didn’t have the puck,” the 32-year-old veteran told reporters in Winnipeg on Thursday. “It was a late hit. I never had the puck, and he flicks his elbow to my face. And [the NHL is] not going to do anything about it.”

Not only was Virtanen not suspended for the elbow, but he didn’t receive a penalty on the play. Perhaps if Perreault was injured, Virtanen would have received a suspension — but instead he didn’t miss a shift.

“I got to take matters in my own hand next time this happens and I get to swing my stick across his forehead, and I shouldn’t get suspended then,” added Perreault.

You can understand why Perreault would be upset, though not many NHL players promise to start swinging their stick to the face of opposing players.

“The only thing I can do to defend myself is use my stick,” said the 5’10” Jets winger, who later said that Virtanen was just trying to pick on a smaller player. “So the next guy that does that to me is going to get my f*cking stick. And I better not get suspended for it.”

Just a guess, but I think he might get suspended for that.

“Maybe I should start running around with my elbows up and hitting guys in the face.”

Also probably not a good idea.

The situation is not dissimilar to the trouble that’s brewing between the Calgary Flames and Edmonton Oilers, where Zack Kassian sounded off recently.

Kassian was suspended for fighting Matthew Tkachuk, an unwilling combatant who had just delivered a questionable hit.

“He messed with the wrong guy,” Kassian said, hinting at retribution.

While the Flames and Oilers play again in two weeks, the Jets will have to wait longer before their rematch with the Canucks. The Jets visit Vancouver next on March 15.

Maybe Perreault will have calmed down by then, but I wouldn’t bet on it.