More than a decade and a half ago, TransLink was in the process of evaluating its route and technology options for what would eventually be realized as SkyTrain’s Millennium Line Evergreen Extension.

The public transit authority commissioned IBI Group to complete a study outlining the cost and benefits of various routes along the northwest corridor option along Clarke Road and Barnet Highway — the route that was ultimately chosen — and the southeast corridor along Lougheed Highway between Braid Station and Coquitlam Town Centre through Mallairdville and Cape Horn.

Examples of DMU include the Union Pearson Express in Toronto, and the Trillium Line in Ottawa.

Not only did the study have a direct comparison for DMU between Braid Station and Coquitlam Town Centre Station, but it considered a full-fledged line running along much of Canadian Pacific’s (CP) railway corridor along the Fraser River.

This DMU rapid transit line would start at a new interchange hub station next to the Canada Line’s Marine Drive Station, running south along Yukon Street to reach the CP rail corridor. It would then continue along the rail corridor through South Vancouver, passing through River District (East Fraserlands), and into South Burnaby and New Westminster, before reaching Coquitlam.

The study envisioned up to 14 stations along its entire length reaching Coquitlam Centre, including at Victoria Street, Kerr Street, and Cromwell Street in River District, as well as Front Street in downtown New Westminster, interchange stations with the Millennium Line at Sapperton Station and Braid Station, a station at King Edward Station serving the Coquitlam commercial district where IKEA and Cineplex are located, a station next to the Riverview Hospital lands for its high-density redevelopment potential, and an interchange hub station at Coquitlam Central Station. 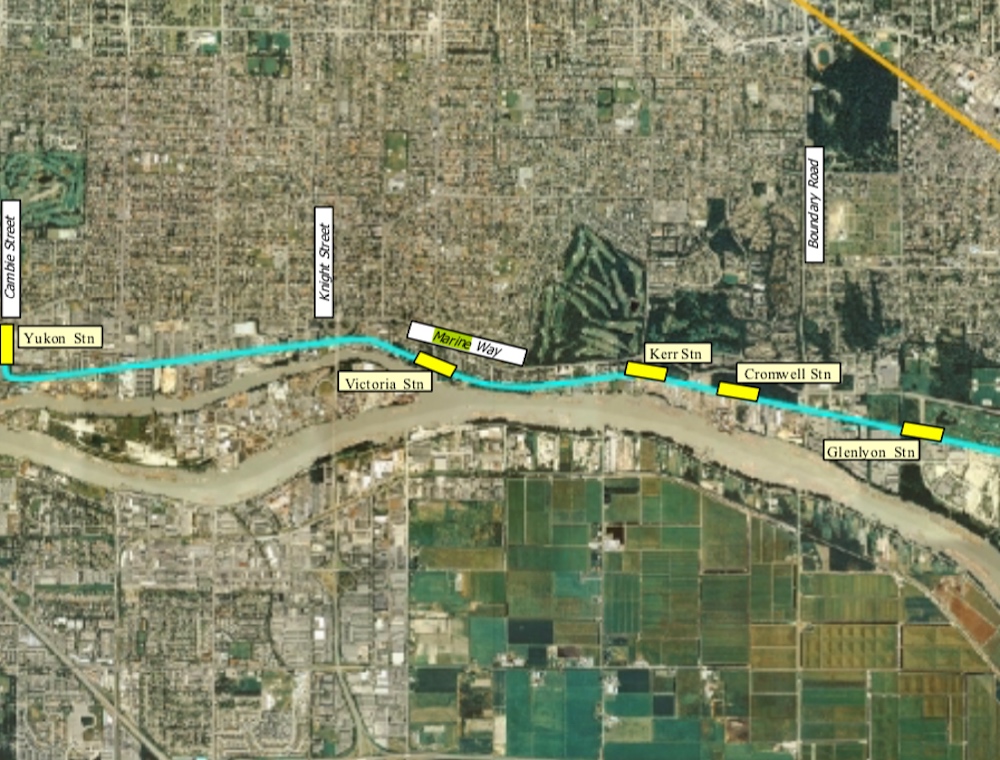 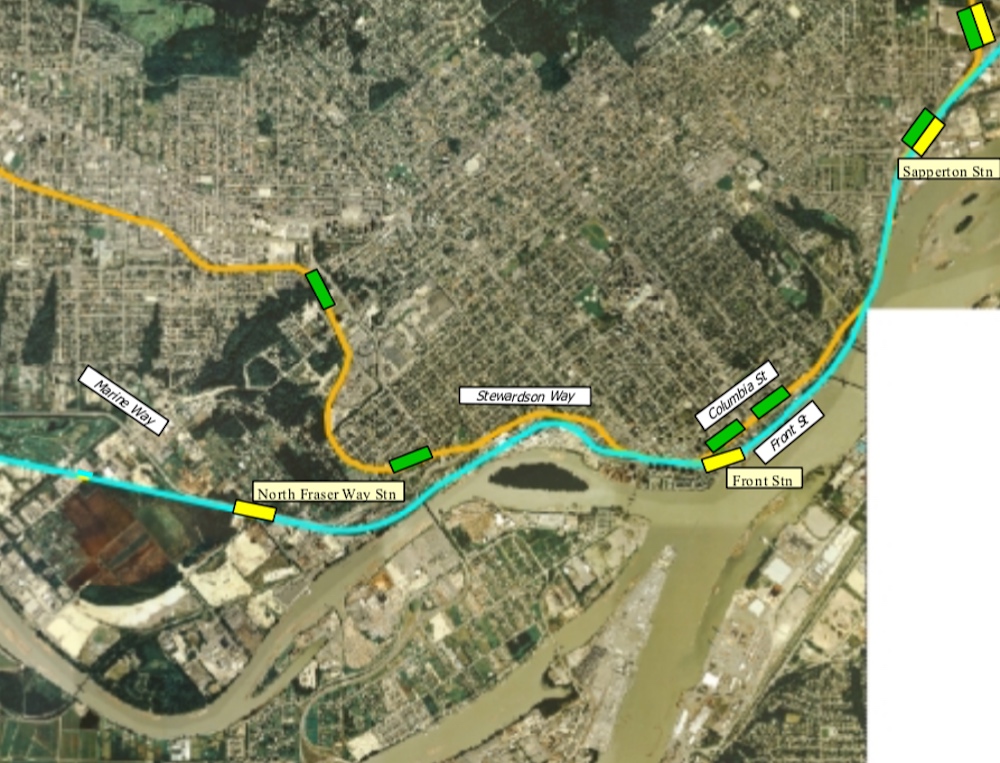 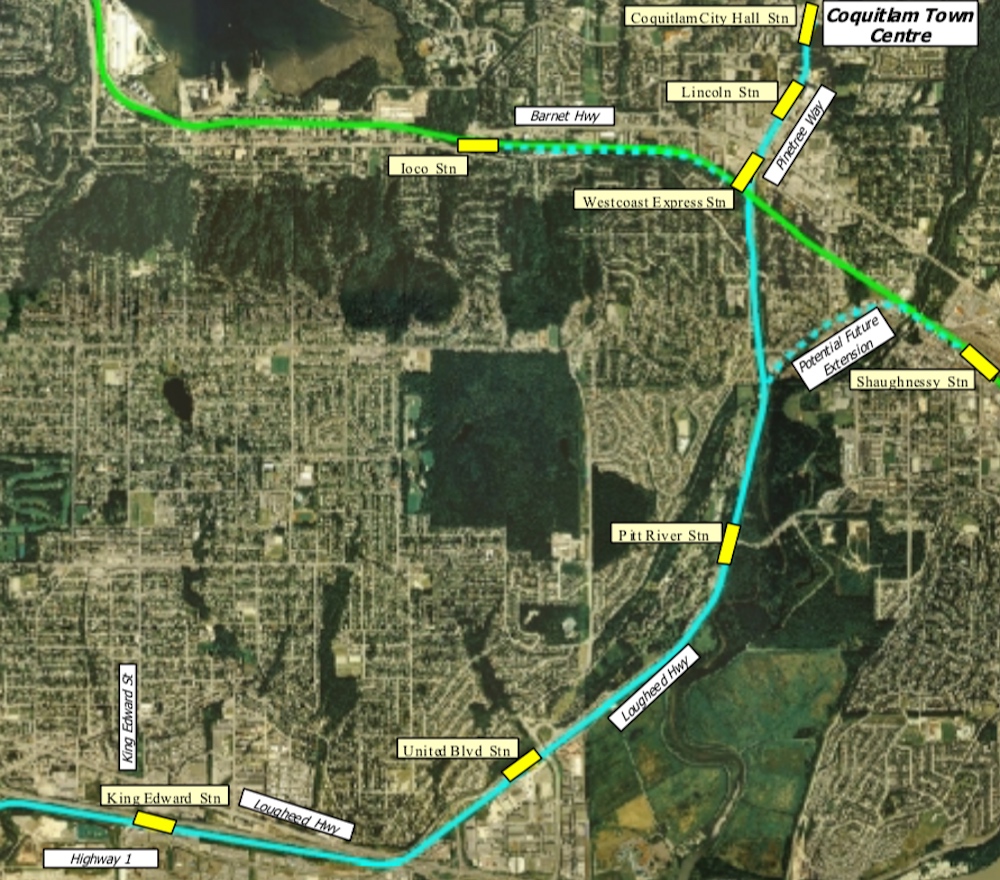 The entire length of this rapid transit line is 32 kms from Marine Drive Station to Coquitlam Centre, offering an impressive end-to-end travel time of 53 minutes. The average speed, including station dwell times, is 37 km/hr, and the maximum vehicle speed is 120 km/hr.

This is all contingent on receiving permission from CP to operate on its railway, which has seen growing freight traffic that is prioritized over any passenger traffic. For the same reason, this has also limited TransLink’s ability to expand West Coast Express commuter rail service.

Between Coquitlam Central and New Westminster, the DMU would have to run on its own exclusive double tracks due to high freight traffic volumes on the existing CP railway.

Through New Westminster, additional double tracks are also needed as far west as Queensborough Bridge, as this section also sees high volumes of freight traffic on all existing tracks. But constructing two additional tracks is deemed as problematic due to spatial limitations, with dense industrial and residential development, and physical constraints from steep topography and the proximity to the Fraser River shoreline.

Between the Queensborough Bridge and Yukon Street, CP indicated at the time of the study that it may be feasible to share existing tracks with their limited freight operation. The DMU’s span through South Burnaby and South Vancouver includes a new single track constructed next to the existing CP track, with passing sections at stations.

Only one grade separated location at Boundary Road, such as a railway overpass, was identified as a possible need. While 100% grade separation is ideal for any rail rapid transit, the route primarily crosses local and collector roads that generally see limited vehicle traffic volumes.

Between Braid Station and Marine Drive Station, there will be one km of new double track, 7.4 km of single track, 11.6 km of refurbished single track shared with CP, and 0.75 km of passing track.

However, without double track for the entire length of the line, this configuration would only be able to operate with up to three-minute frequencies between Coquitlam Centre and Braid Station. The remaining span of the line west of Braid Station relying on shared and single tracks would operate with a maximum of 15 minute frequencies, with headways 10 minutes or less resulting in “excessive and significant conflicts.”

The total project construction cost at the time was just shy of $1 billion, and the annual operating cost was pegged at $30 million.

This system would use 35-metre-long, two-car trains, with each train carrying a capacity for 206 passengers or 75-metre-long, four-car trains when pairs are coupled together, carrying 412 passengers. There would be a fleet 92 cars in 46 married pairs. 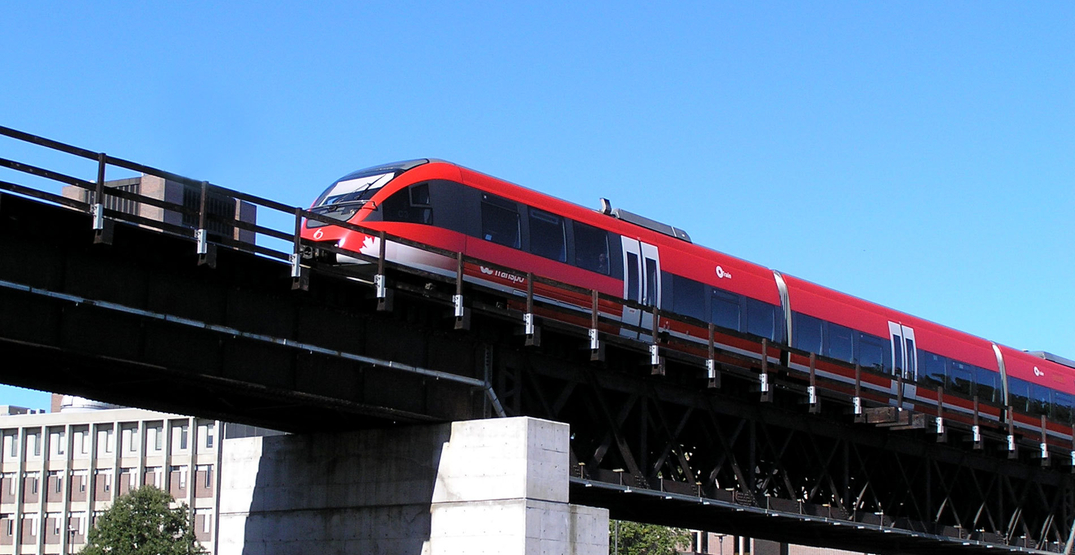 In 2004, this DMU option was projected to have a benefit-cost ratio (BCR) of just 0.27, which means the project’s economic benefits do not exceed its construction and operating costs. A BCR of 1.0 or more means the economic benefits exceed input costs. Comparatively, the controversial Surrey Newton-Guildford LRT project that was cancelled had a BCR of 0.69, while the Canada Line had a ratio of 1.25, the Evergreen Extension had 1.27, the SFU Burnaby Mountain Gondola had 1.8, and the full extension of the Millennium Line from VCC-Clark to UBC in a single phase had 2.3.

But the region has far outpaced the trends forecasted in 2004 when accounting for strong public transit ridership growth, and transit-oriented developments spurring population growth.

There are new large pockets of high-density residential, not just in New Westminster but in South Vancouver along Marine Drive between Boundary Road and Knight Street, especially the growing River District development. 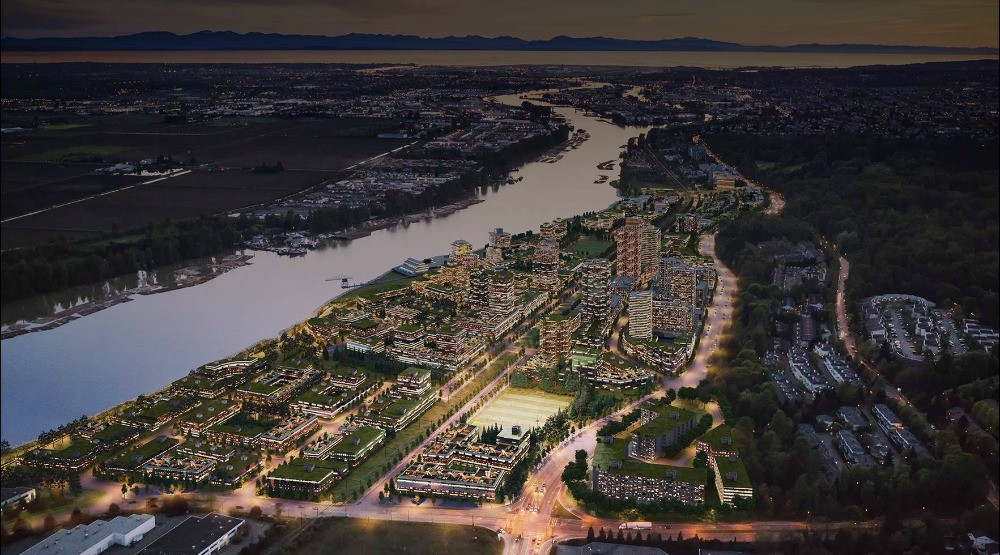 When the 130-acre River District site is fully developed by Wesgroup Properties, it could see a population of up to 18,000 people in 10,000 homes and as many as 1,500 jobs within 250,000 sq. ft. of retail and restaurant space. The No. 31 bus route was recently introduced to connect the new neighbourhood with Expo Line’s Metrotown Station.

The River District master plan sets aside space for a future station on the north side of the rail corridor on the area’s high street, River District Crossing.

To the west, there is also a growing cluster of high-density residential development around Marine Drive Station.

In Coquitlam, just south of IKEA, Beedie Development Group is proposing to turn the 94-acre former Fraser Mills site at King Edward Street on the riverfront into a redevelopment with over a dozen towers, with homes for over 10,000 people and employment for nearly 2,000 people.

If approved, the Fraser Mills redevelopment could set long-term precedent for similar redevelopments on other adjacent industrial sites in the area.

The possibility also remains for high-density residential and commercial development, coupled with new mental health facilities, on the sprawling 244-acre lands of Riverview Hospital, which is currently highly under-utilized. 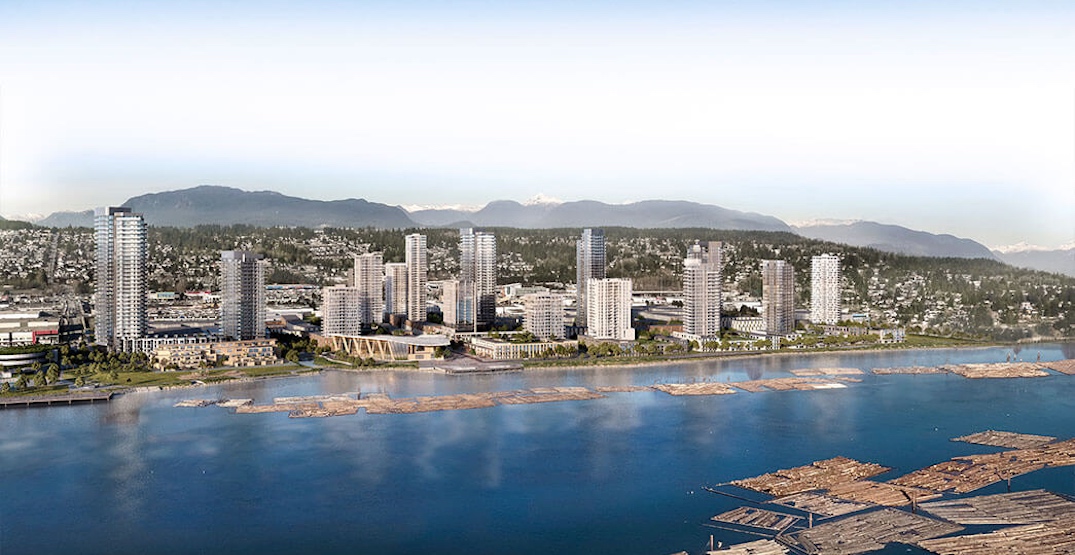 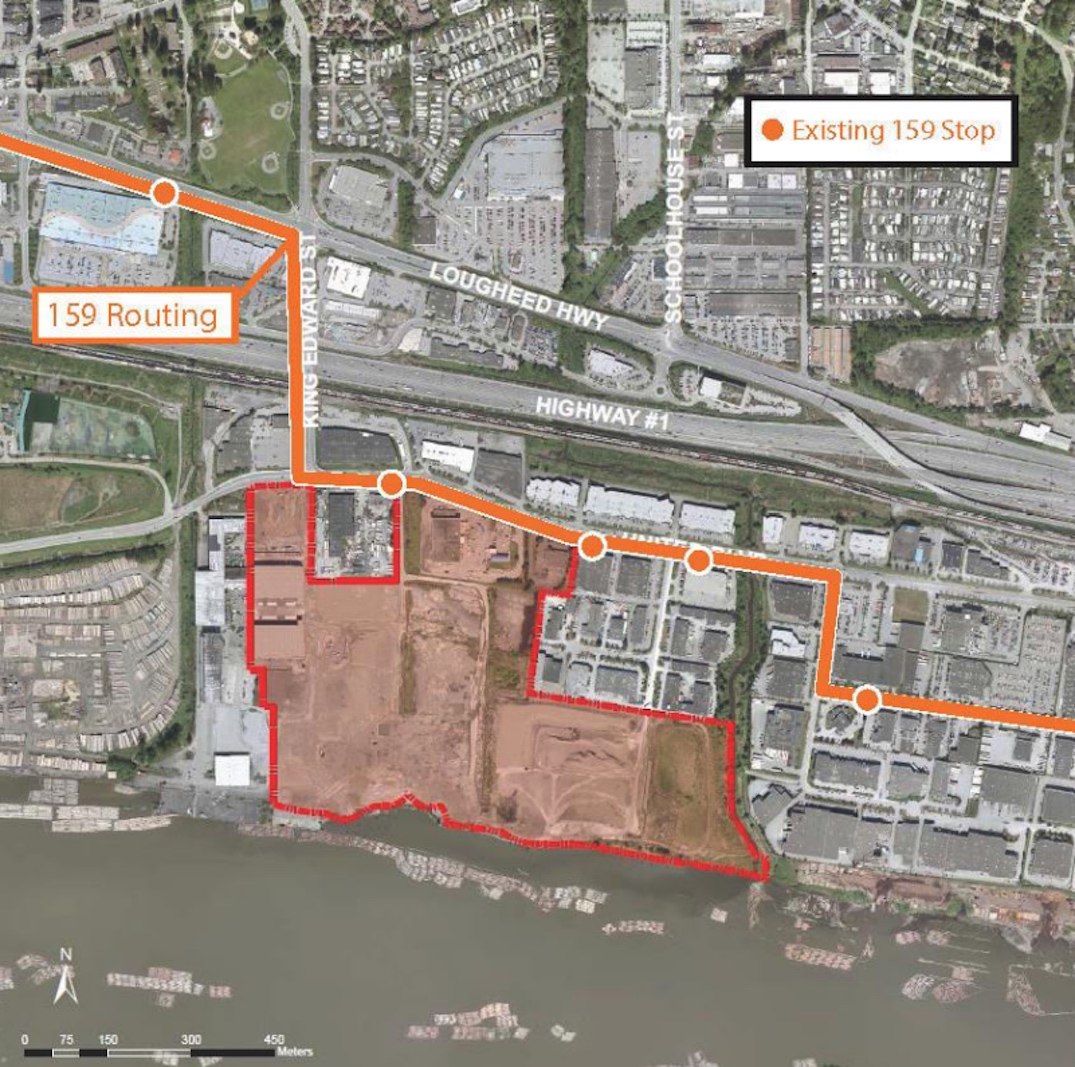 The region is experiencing an extreme industrial shortage that has pushed industrial businesses further out, where there is greater availability, and these conditions are expected to worsen and could push up the cost of goods and services.

Second to land use changes, ridership on the rail system could be further supported by improved connections to north-south bus routes at stations — such as relocating the southern terminuses to the stations — and establishing park-and-ride facilities.

Turning such a line into a seamless continuation of the future rail transit system on the Arbutus Corridor between Marine Drive and False Creek could also improve the project’s overall economic case.

Unlike many other major urban regions, Metro Vancouver lacks existing railway corridors suitable for the implementation of rail rapid transit, without having to build an entirely new right-of-way at a significantly higher cost. Some of the commuter rail services in Toronto (Go Train) and Montreal (Exo) share space on freight railways or own railways originally built for freight. 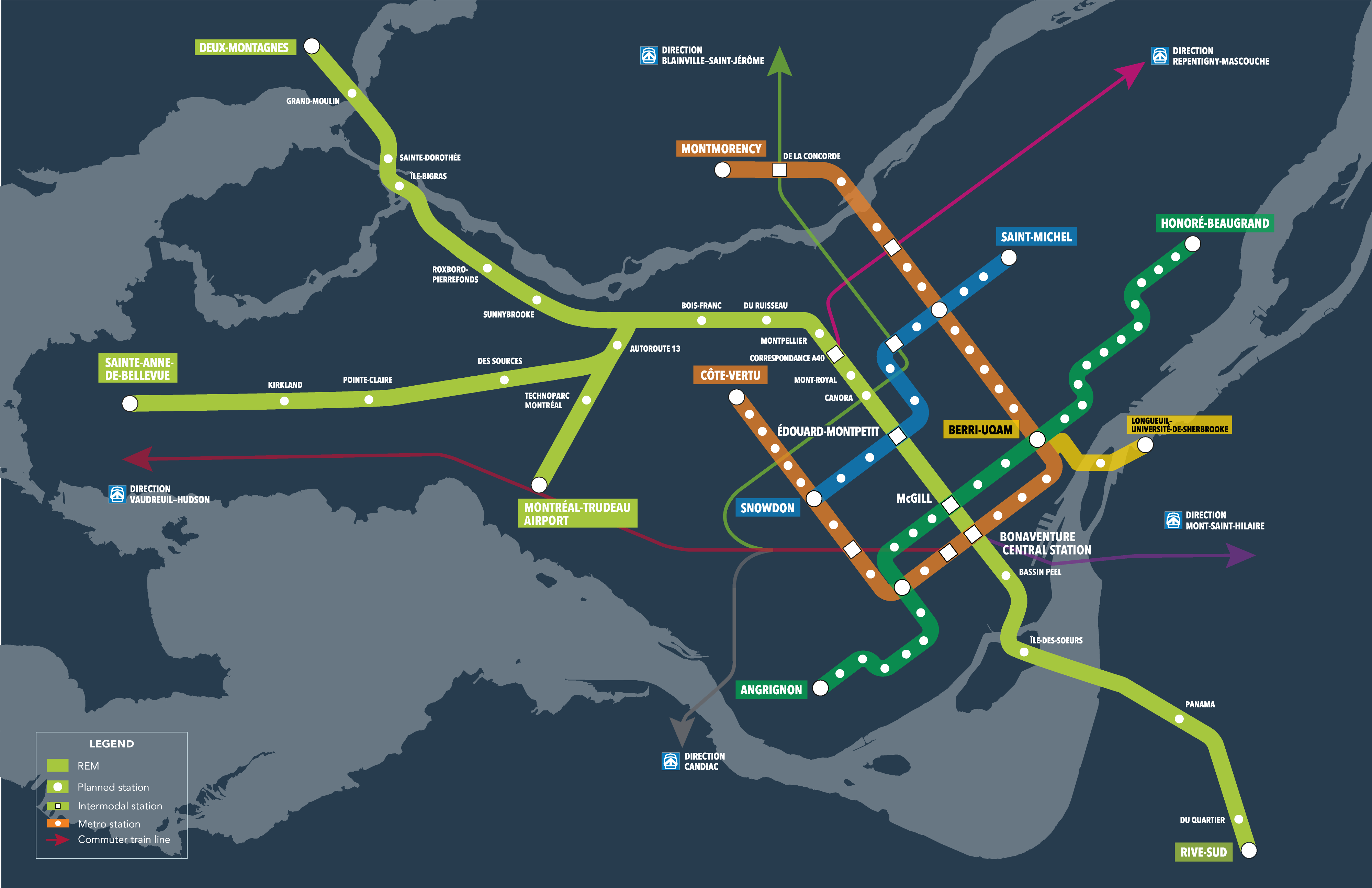 The Deux-Montagnes railway line spanning 30 kms across Montreal was owned by Canadian National up until 2014, with commuter rail services leasing shared track time with freight trains over the prior period. After it was acquired by the public transit authority, commuter rail trains were able to operate on the system all day.

Commuter rail services on the Deux-Montagnes came to a permanent end in May 2020, as the corridor is being rebuilt for one of the lines of the new REM metro network — a fully-automated rail rapid transit system similar to SkyTrain. The use of Deux-Montagnes’ existing right-of-way accounts for 45% of the length of the entire initial 67-km-long REM system, and is the driving reason for why the project’s construction cost is relatively low at just $6.5 billion for the surreal length of rail built over just six years. There will be 26 stations on the REM’s initial system by 2024.

CP’s railway along the north side of the Fraser River between Vancouver and Coquitlam is one of the region’s few railway corridors that are remotely suitable for rapid transit services, but as already explained this corridor comes with immense challenges.

One other corridor that has been spotlighted over the years by advocacy groups is the Interurban corridor, which sees heavy freight use over large sections. But this corridor — spanning 99 kms from Surrey to Chilliwack — has been repeatedly dismissed by TransLink as highly unfeasible for its indirect, zigzag route that runs mainly through agricultural areas with little development and ridership potential. Significant investments would be needed to bring this corridor to commuter rail or LRT standards if it were to achieve more desirable travel times. 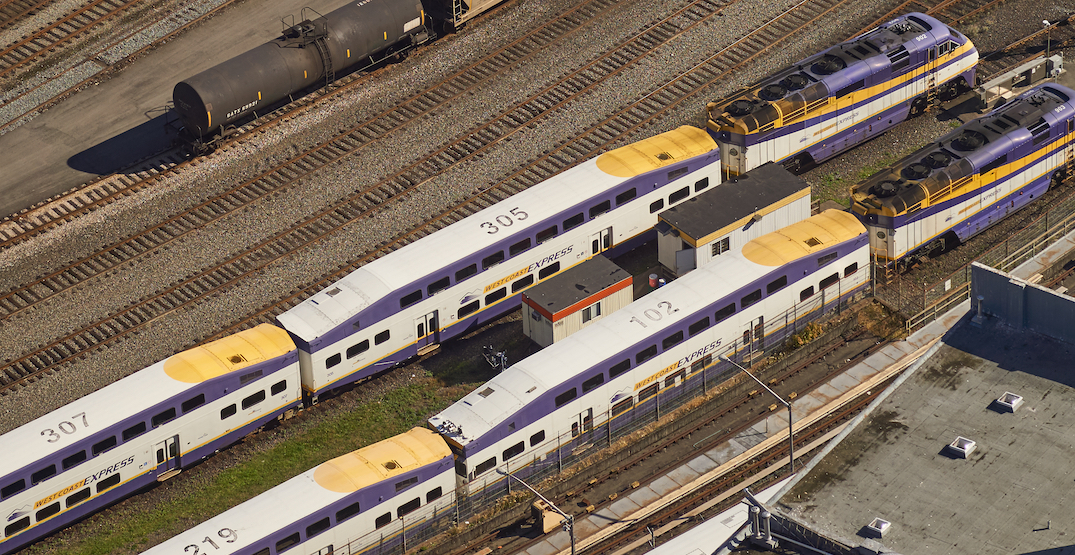