Improving the movement of people and goods throughout Metro-Vancouver and the Fraser Valley is a century long struggle.

Dissected by wide river channels, wedged between towering mountains to the north and the American border to the south, and an urban core sitting upon a narrow peninsula on the westernmost edge of the region, all of these geographical obstacles have all contributed to this predicament.

Today, our region is riddled with inadequate roads and bridges and limited public transit services. Therefore, it is no surprise that many have come forth with ideas, of varying sensibility, with how to overcome this current region wide gridlock.

The first is the long overdue extension of the SkyTrain Millennium Line to UBC via a subway under Broadway. The other is the extension of the Expo Line from the current King George Station terminus to Langley City along Fraser Highway.

This latter eastward SkyTrain extension consists of eight stations over 16 km and has an estimated travel time of 22 minutes.

Compare this to the 35-minute travel time estimated for a previously proposed at-grade Surrey-Langley LRT with nine stations (one being a duplicate of King George Station to accommodate the change in technology) along the same route or the 27-minute travel time for the scrapped Surrey-Newton Guildford LRT along a shorter 10.5-km route. 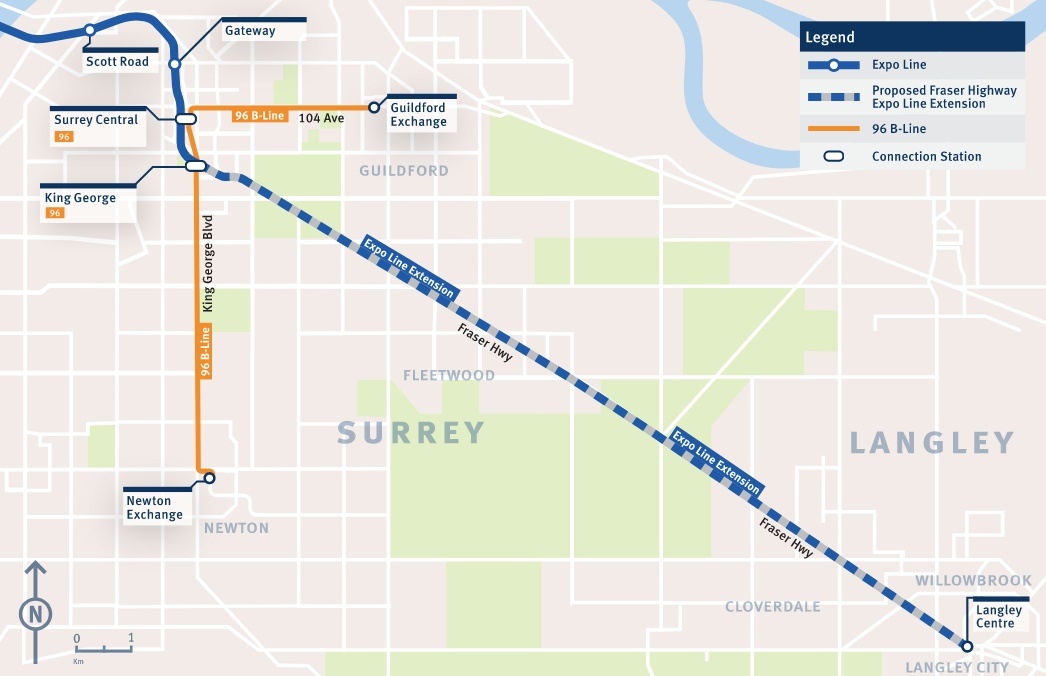 This illustrates one of the key factors that has made SkyTrain one of the most successful transit systems in North America: speed.

A recent survey of over 21,000 participants displayed overwhelming support for this SkyTrain extension of the Expo Line, ranging from 82% in Surrey to 90% in the City of Langley.

Respondents specifically indicated that optimal travel time and speed were among the most important factors for transit planning. SkyTrain, with its grade separation, automation, and frequency, is well suited to meet these demands.

Even with these obvious strengths, there are those campaigning for an alternative approach.

One of these organizations is the South Fraser Community Rail (SFCR) group with their desire to replace the Expo Line extension with the reactivation of the Interurban passenger rail line with hydrogen fuel cell-powered trains.

The people behind this idea are former Premier Bill Vander Zalm, former Langley Mayor Rick Green, and UBC Professor Patrick Condon, a man who has a long history opposing SkyTrain projects in favour of an at-grade rail like streetcar.

The Interurban itself opened in 1910 before closing in 1950. It was a two hour and 45 minute long ride from New Westminster to Chilliwack, crisscrossing the Fraser Valley between the Fraser River and the border along its 99 km route.

SFCR’s plan, as detailed in their recent report, Reviving Community Rail for a Sustainable Fraser Valley, which appears to be the basis of their recent round of open houses, promises a lot with little insight on the technical details and methodologies used to develop their plan.

The literature can be bloated and meandering, but the key points to be found are as follows.

The route is 99 km in length (same as before), has an estimated travel time of 90 minutes end to end, 12 proposed stations, 80 km/h travel speeds (unclear if this is the top speed or average travelling speed), heavily involves the green revitalization of community centres while connecting the region together, will service 1.2 million residents, and all of this will only cost $12 million per km to construct.

This sounds too good to be true — and it is.

Many of these claims are made with few details on scheduling, the required negotiations with Canadian Pacific and Southern Railways (both currently using the line for freight operations), meaningful population density analysis for accessibility, and most importantly competitive comparisons between different technologies, routes, and modes of transportation. 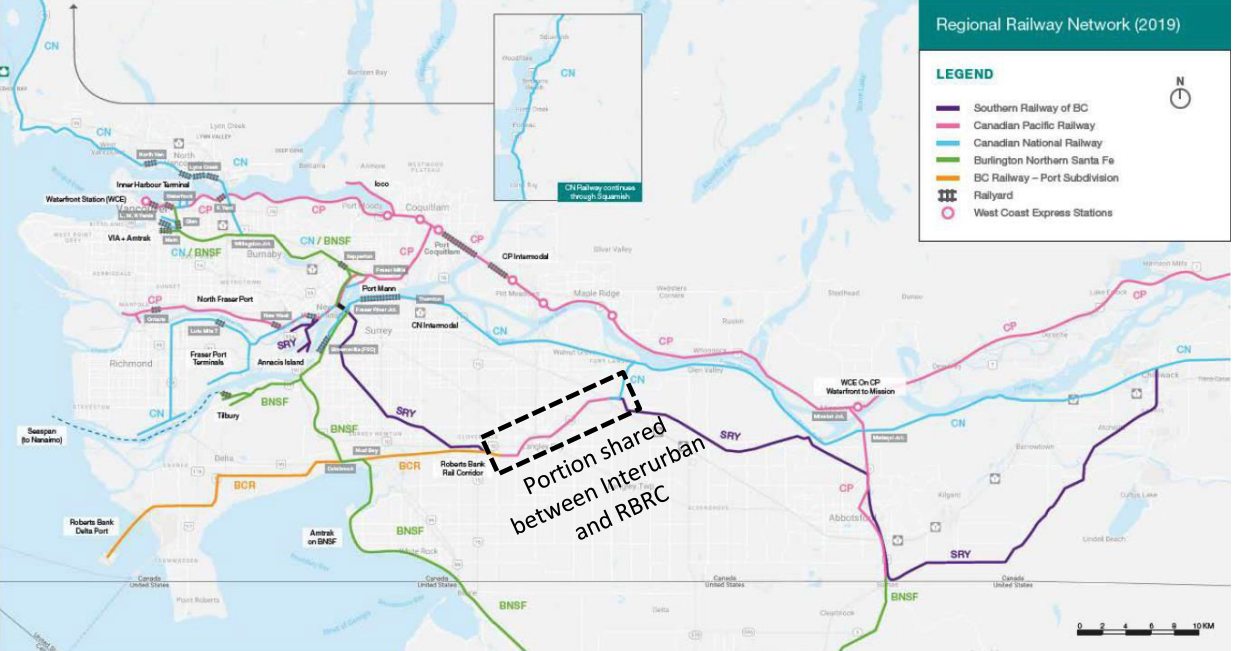 The first major flaw is that SFCR heavily bases the legitimacy of the Interurban’s route on the population centres of the Fraser Valley circa the first half of the 20th century. Yet, the vast majority of population growth in this region has occurred in the last 70 years following the Interurban’s demise.

This immense expansion has largely been shaped not by the Interurban’s winding route, but through the expanded road network that followed. In particular, this growth has occurred along the far more linear and direct Fraser Highway and Highway 1 corridors.

Therefore, in 2019, the original Interurban route misses the majority of these population centres.

This leads into one of the most obvious misrepresentations of data: the 1.2 million residents served by the revitalized interurban.

This figure seemingly includes the entire population of the eastern half of Metro Vancouver south of the Fraser and the Fraser Valley east to Chlliwack. While this is true by the loosest definitions of catchments, it provides no meaningful insight into ridership potential.

For example, the Expo Line can be quoted as servicing the entire populations of Vancouver, Burnaby, New Westminster, and Surrey combined at nearly 1.5 million people. Yet, this figure would be quite disingenuous when one considers that it includes those living in such areas as South Surrey, Kerrisdale, and Burnaby Heights.

Far more important are detailed analysis that include the existing population densities within 500 metres of proposed stations, commuting patterns, and important endpoint destinations along the route.

These flaws are largely masked with the promises of building entirely new neighbourhoods around station locations. Considering potential future growth along a transit project is important, but not in absence of current realities. 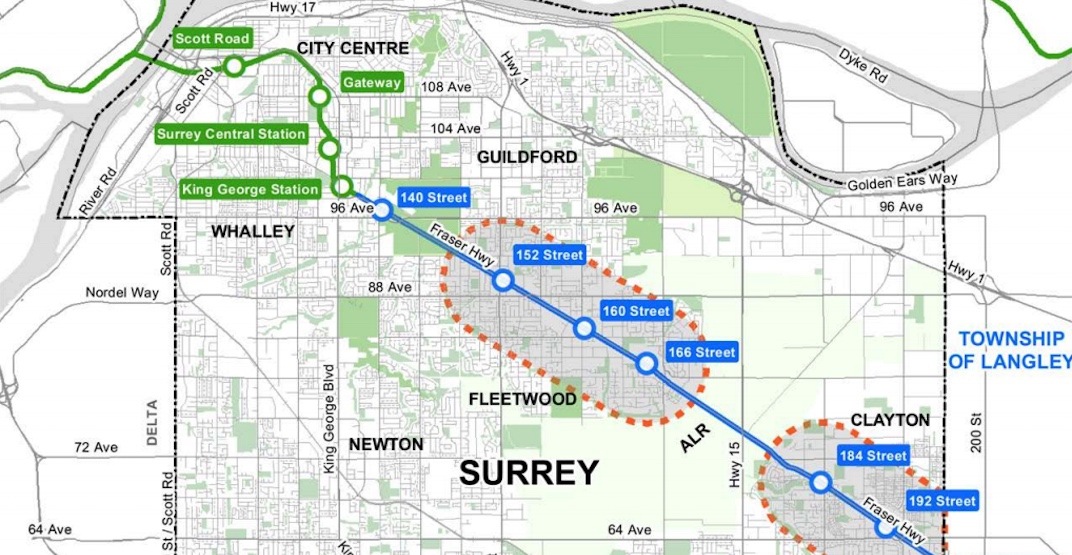 This vague use of statistics and figures continues with the only semblance of a technological comparison between the cost of the Interurban and the former SNG LRT proposal along Fraser Highway.

SFCR states the Interurban being only 8% of the cost per km and 20% the cost per capita. The question is per capita of what? The entire population of Surrey or the Fraser Valley? Where are the far more suitable cost-benefit ratios regarding anticipated ridership (the cost per passenger)?

This appropriately displays the lack of expertise the SFCR has in transit planning.

From there comes the largest question of all, the route itself. The Interurban corridor snakes north to south several times along its general west-to-east path, making several unnecessary detours through sparsely populated agricultural areas.

Compare this to the direct linear ride offered by extending the Expo Line, all without any transfers.

In regards to running through large swaths of protected Agricultural Land Reserve (ALR), the report stretches itself to the limit in proposing to build entirely new dense town centres within the ALR itself. These communities would be established between Langley and Abbotsford, while completely missing the existing community of Aldergrove. 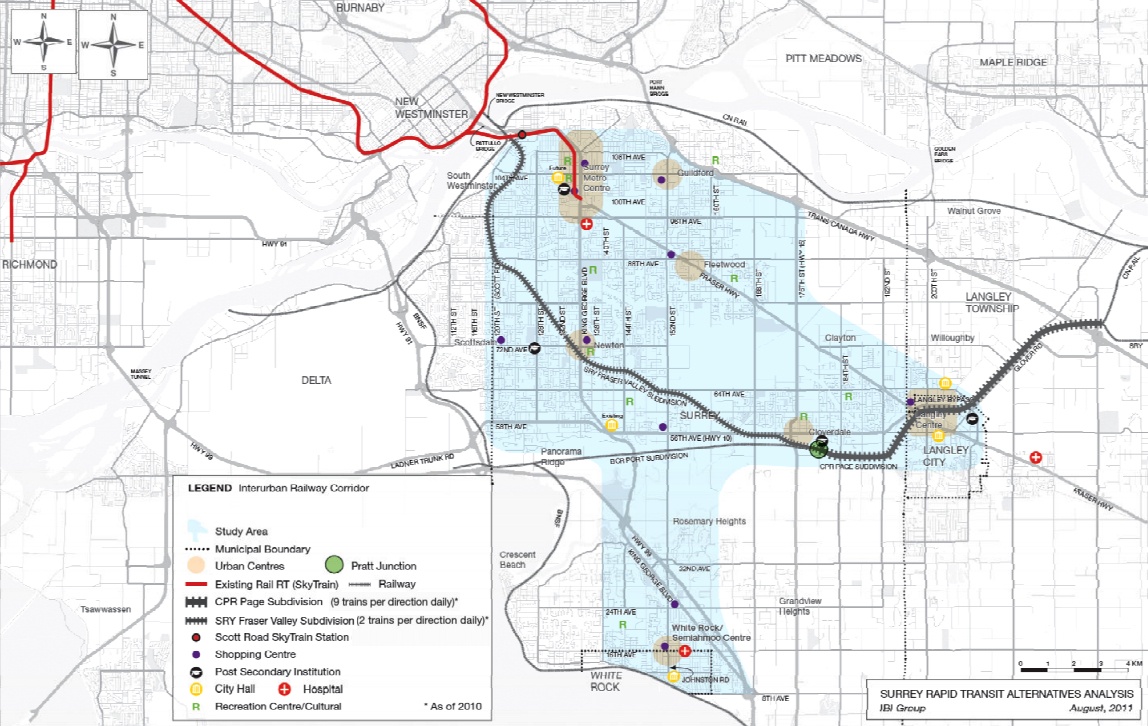 It is also unclear what the purpose of the Interurban is.

At times SFCR seems to advertise it as a long-distance commuter rail including such features as park and ride facilities, somewhat similar to the West Coast Express, but then directly states that the Interurban is not focused on servicing trips to Vancouver (AKA not focused on long-distance travel).

To further confuse their approach, the success of the Canada Line is referenced within the report, yet the reasons for this success (grade separation, direct linear route, high frequency) are not explored.

In fact, the Interurban is frequently envisioned to be more akin to a tramway or street-level LRT through the urban portions of the corridor, often focusing on style over substance.

The report even states that through Abbotsford, the trains will run through public spaces at slower speeds, allowing them to interact with the public. Besides the obvious safety concerns and potential for delays, this also leads one to question the promised 90-minute end-to-end travel time.

While beautification and integration of transit is a valid concern, it should not take precedence over function.

The non-linear nature of the route and reduced speeds through urban areas also throw doubt on this idea’s promised end-to-end travel time and ability to compete with motor vehicle use, especially given the far more direct connections between major population centres offered by the existing highway infrastructure. 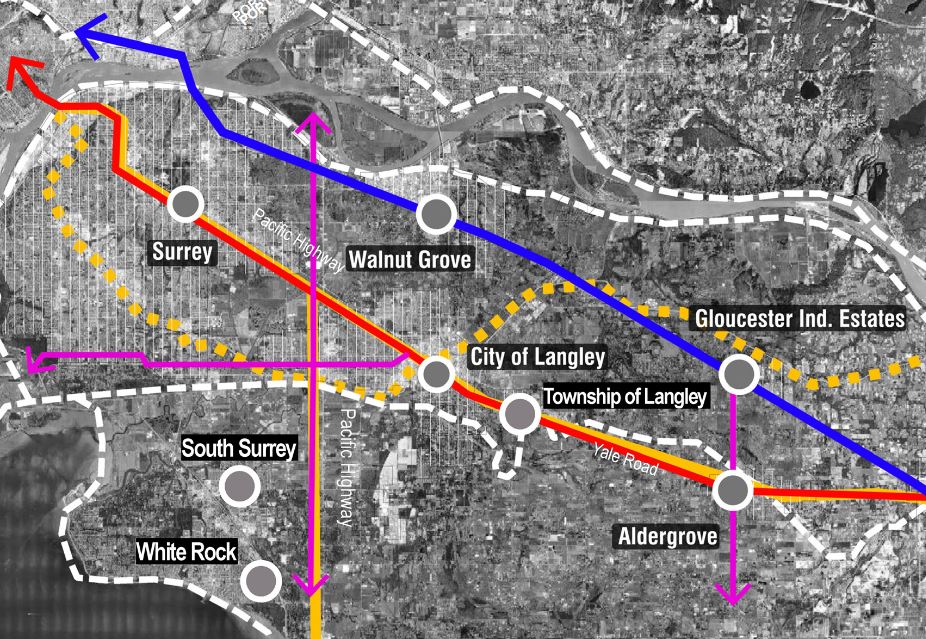 Then there is the question about interlining with existing freight operations. This issue is swiftly pushed aside with the claim that all freight must yield to passenger transit and even incur all costs for rail expansion along the corridor.

Given the power and magnitude of the Vancouver Fraser Port Authority, Canadian Pacific Railway, Southern Railway, and all other interested parties, including the federal government, one must question these simplified claims.

In fact, hundreds of millions of dollars have already been invested over the last decade grade separating major crossings along sections of the Interurban corridor. This has been done in anticipation of expanded port activity and longer more frequent freight trains. Such major investments are not done lightly. 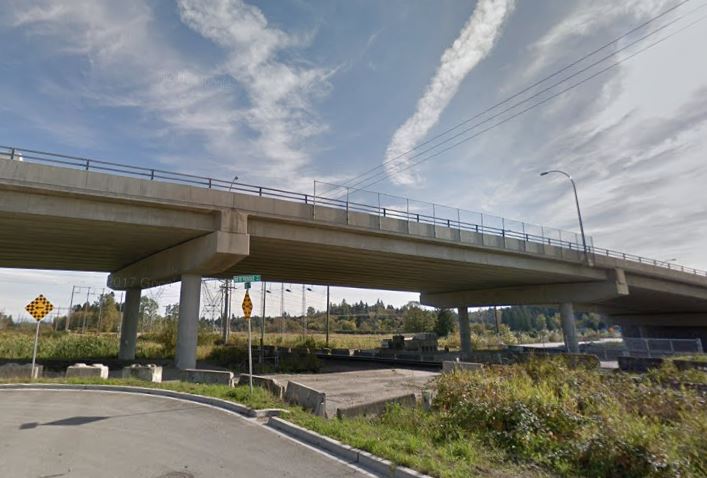 SFCR’s plan to revive the Interurban is full of contradictions and missing data. Much of this has already been extensively studied in the past by independent groups and routinely determined to be infeasible.

In the end, like many aspects of life, in public transit you get what you pay for.

One should always comb through the details of projects that promise it all with bargain basement cost estimates.