The MPIC launched in July 2017 with a $2.31 million budget for its research and policy development work, which is guided by a paid 14-member commission supported by a team of researchers and coordinators, and its report presented to the Mayors’ Council this morning is the culmination of all of their work.

Road pricing has long been stated as a likely tool to help reduce congestion in the region while also providing TransLink with a continuous, reliable stream of funding to help cover the cost of transit service expansion projects. Cities such as London, Stockholm, Milan, and Singapore already have implemented such measures to encourage “decongestion”.

Just like tolling, under this model, 12 major crossings throughout the region will see a new “charge point” come into effect. This includes the Lions Gate Bridge, Second Narrows Bridge, and the bridges along the Fraser River.

It suggests possible charge point locations on or near major bridges, in addition to other strategic locations such as North Road – the boundary between Burnaby, New Westminster, Coquitlam, and Port Moody. 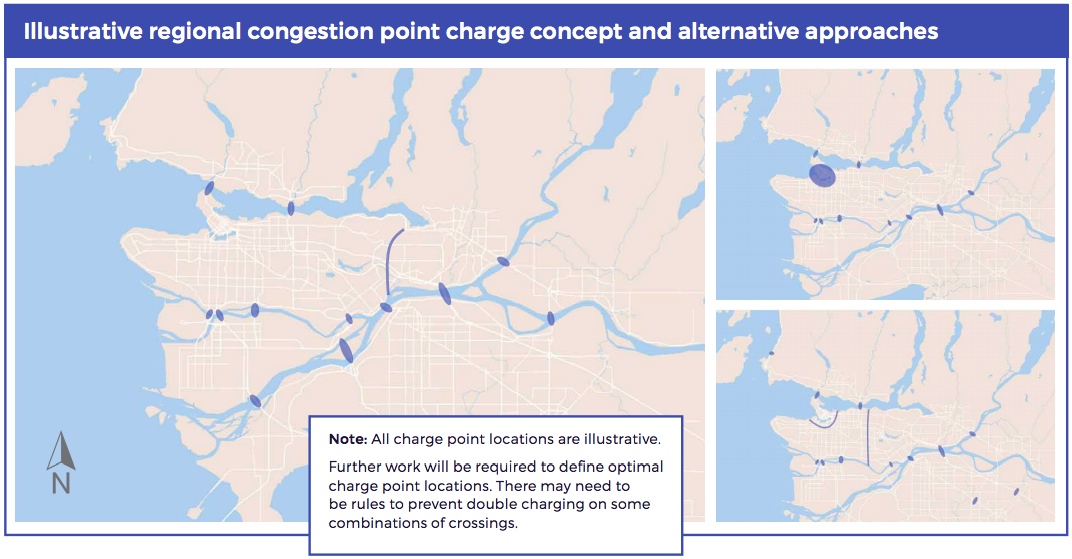 The rate is charged at between 50% and 70% of the “marginal social cost of congestion” at the given location and time, with charges varying by time of day, location, and direction of travel. It is estimated that the average household will pay between $5 and $8 per day or $1,800 to $2,700 per year, assuming they do not change their behaviour. 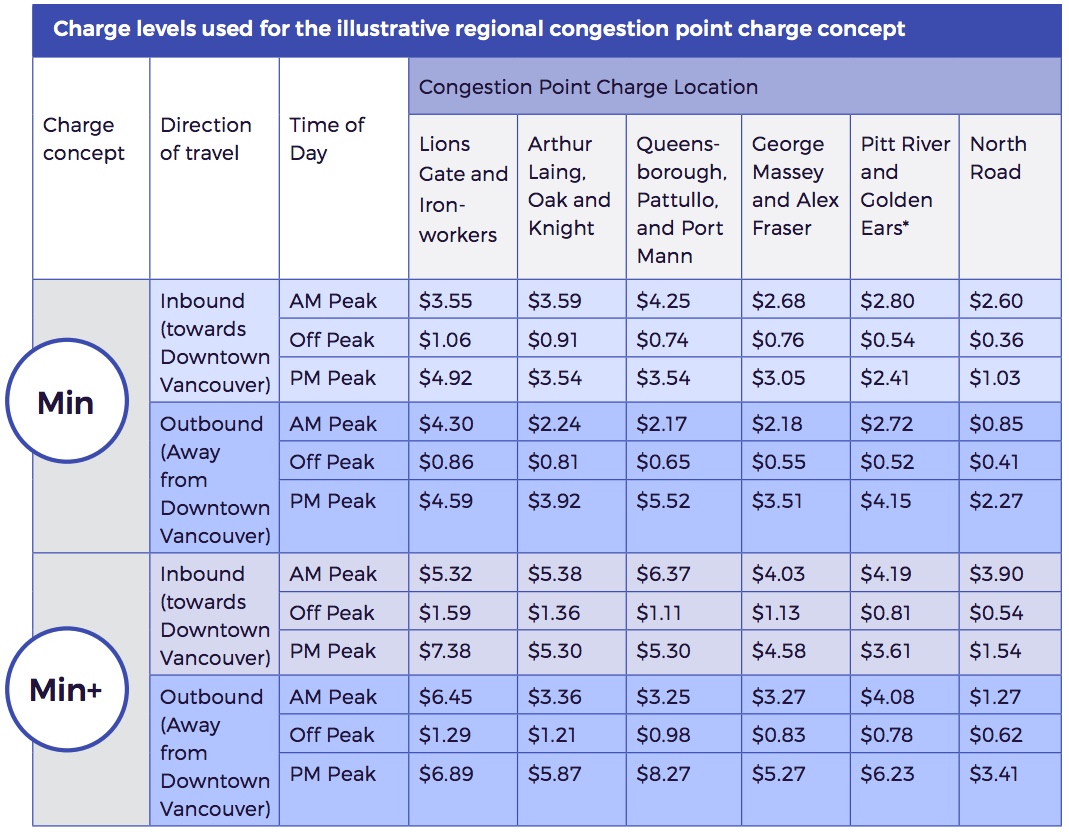 There would be a visible impact to traffic conditions; congestion will fall by between 20% and 25% and travel time reliability will improve by 17% to 20%. But greenhouse gas emissions from reduced vehicle traffic will only decrease by 2% to 3%.

Tolls are not recommended for the three bridges over False Creek – Burrard, Cambie, and Granville – to downtown Vancouver as traffic will simply divert around the inlet to Main Street and Quebec Street.

And previous suggestions to implement a $1 toll on each bridge were not considered as there would be no impact to congestion, and it is deemed as a very inefficient way to raise revenue.

As for the second option, drivers would be charged by the distance they travel based on the zones, with the exact number and boundaries of the zones to be determined and refined.

The MPIC creates eight zones as an example for potential distance-based charge rates, which are set at 50% and 75% of the marginal social cost of congestion at the given location and time.

With this system, an average household will pay $3 to $5 per day or $1,000 to $1,700 per year, if they do not alter their behaviour. Between $1 billion and $1.6 billion will be raised annually, and this includes this option’s incorporation of an elimination of TransLink’s 17 cent fuel tax and replacing the lost fuel tax revenues within the new charge.

But the capital and operating costs are far higher; it will cost between $400 million and $700 million to create the infrastructure required and install on-board tracking units in all vehicles in Metro Vancouver, and the cost to run the program each year is between $300 million and $500 million.

This scheme would have an economic benefit of between $180 million and $350 million. Congestion will fall between 20% to 25%, and travel time reliability will increase between 18% and 23%. A modest greenhouse gas emission effect is expected, with a reduction of between 3% and 4%. 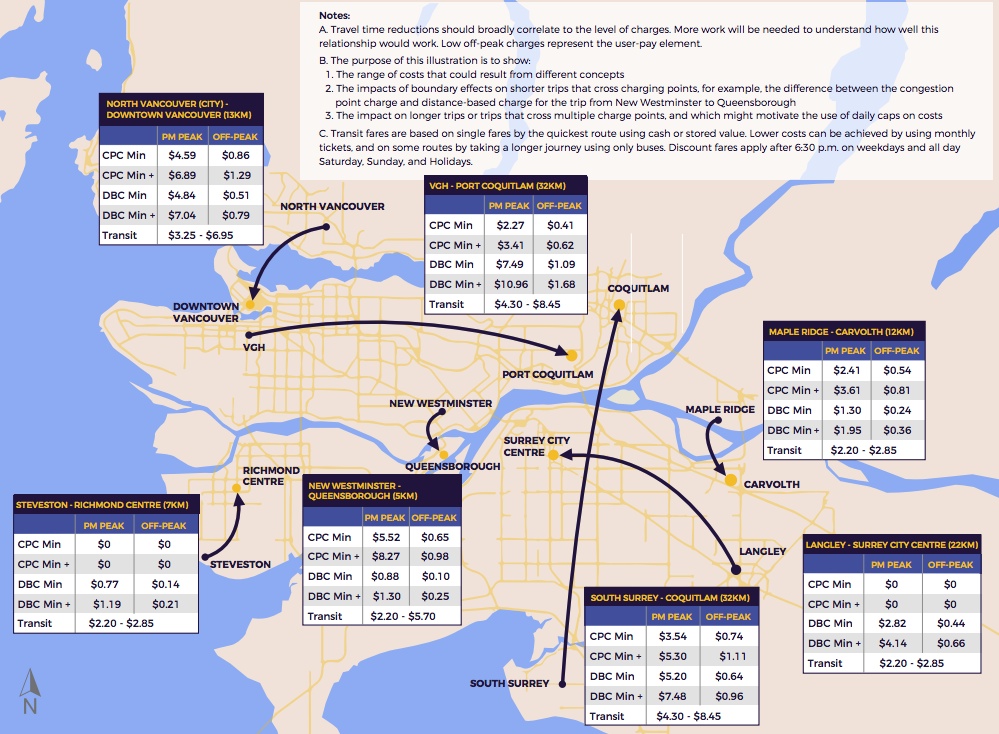 MPIC is recommending TransLink use 13 principles to guide the creation of its mobility pricing strategy. These principles relate to addressing congestion, ensuring fairness and equity, investment opportunities (but not using mobility pricing solely as a revenue-generating scheme), and other considerations such as privacy, environmental concerns, and supporting economic growth.

Based on the timeline by MPIC, after further study by TransLink and the development of a policy, mobility pricing could be implemented in the region by the mid-2020s.