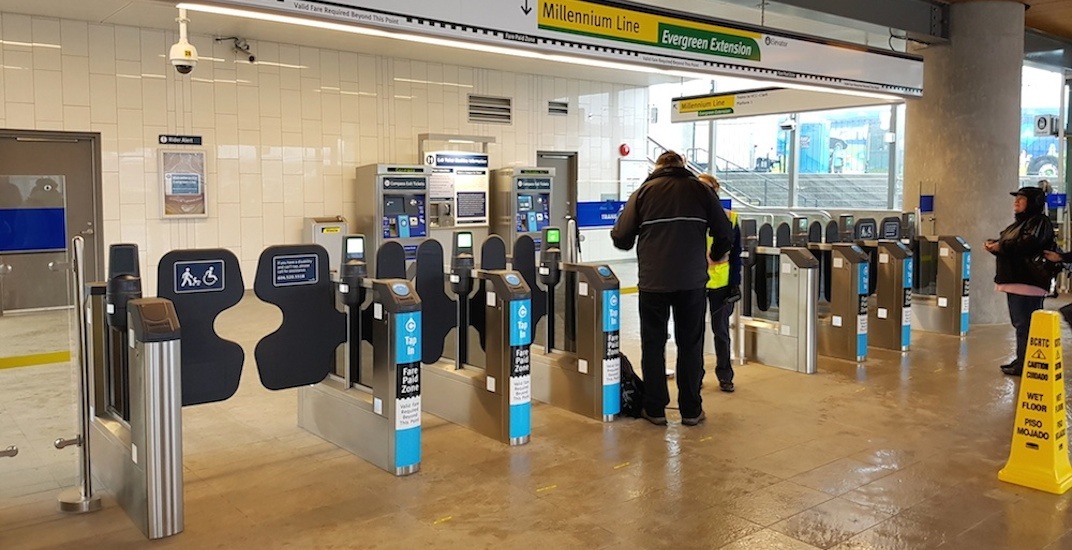 TransLink is proposing to completely eliminate the three-zone system and its arbitrary boundaries in favour of a fairer distance-travelled structure.

Two options, similar to the distance-travelled structures of other major transit systems in San Francisco, Hong Kong, Singapore, and across Japan, have been proposed for single trips. The existing monthly pass could also be replaced with a new pass based on a distance-travelled model.

A distance-travelled fare structure is made possible on TransLink’s services with the implementation of the Compass Card.

In this option, all bus trips will continue to be one flat fare regardless of distance travelled.

However, for trips on SkyTrain, there will be a distance-travelled structure. A base fare will cover travel for up to 5 km or between 3 to 4 stations.

When the base distance has been reached, the SkyTrain fare will increase incrementally with each additional km until a maximum fare of $4.30 is reached at a distance of 16 km. Fares will rise 20¢ to 25¢ for each additional km travelled between 6 km and 10 km, and 15¢ to 20¢ for 11 km to 15 km.

There is no additional fare for a transfer to bus or SeaBus while using a Compass Card.

This option benefits passengers who take short trips on SkyTrain across a current fare zone boundary or shorter two-zone and three-zone SkyTrain trips. 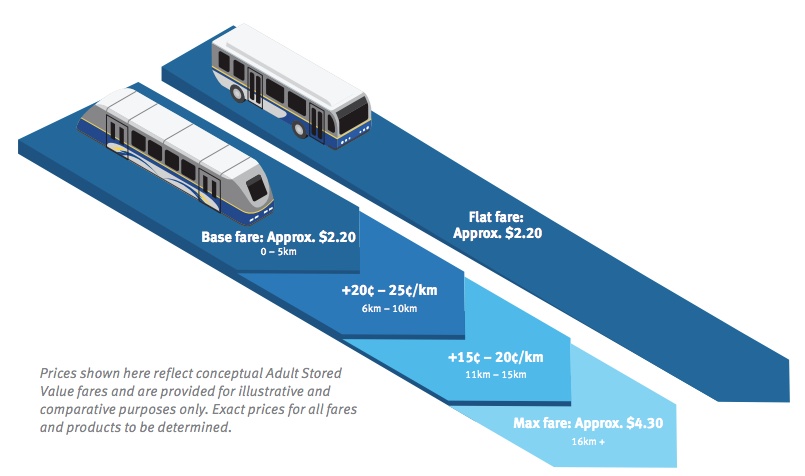 Option 2: Fares priced by KM across all transit services

Distance travelled fares apply to all transit services, including buses, SeaBus, and SkyTrain.

Passengers will not be required to ‘tap out’ before exiting a bus as TransLink has identified new technology that can detect when a trip on the bus has ended. This addresses concerns over passengers forgetting to tap out as well as any extra delays with disembarking a bus.

With this structure, passengers will pay more for bus trips longer than 5 km or long trips on SkyTrain. There is no additional fare for any transfer to another service with the Compass Card. 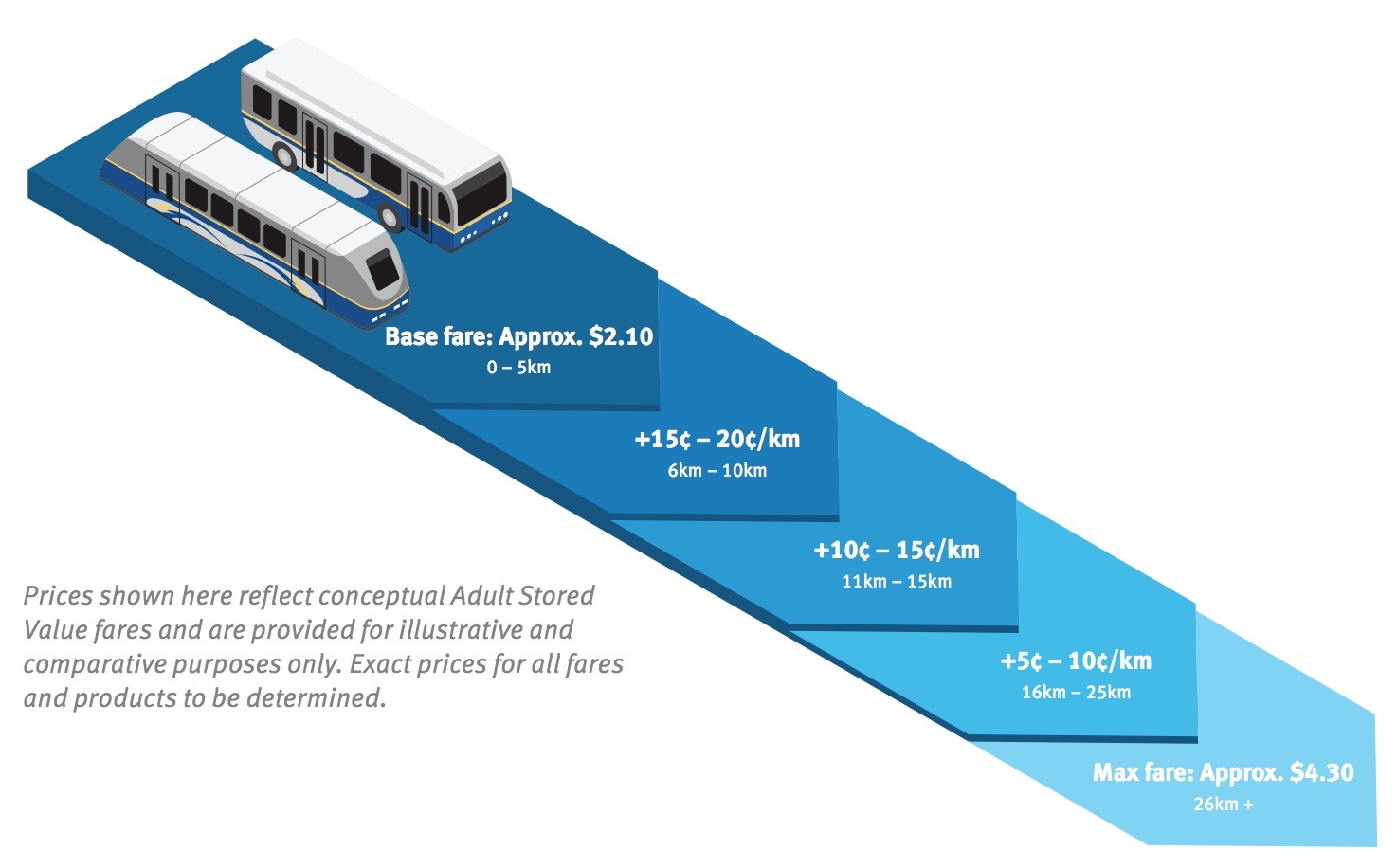 Option 2: Fares priced by KM across the transit system. (TransLink)

The first option overall has the least impact and change to fares compared to the existing three-zone structure.

TransLink notes that the first option is simpler for passengers to learn and use, and may be an easier transition.

As for the second option, the public transit authority says distance-travelled fares across all services is “better aligned with the principle of the more you use, the more you pay across all modes.” It could also allow for a lower base fare while keeping the maximum fare about the same as the current system.

A new smartphone app could be created to help passengers plan the cost of their trips. 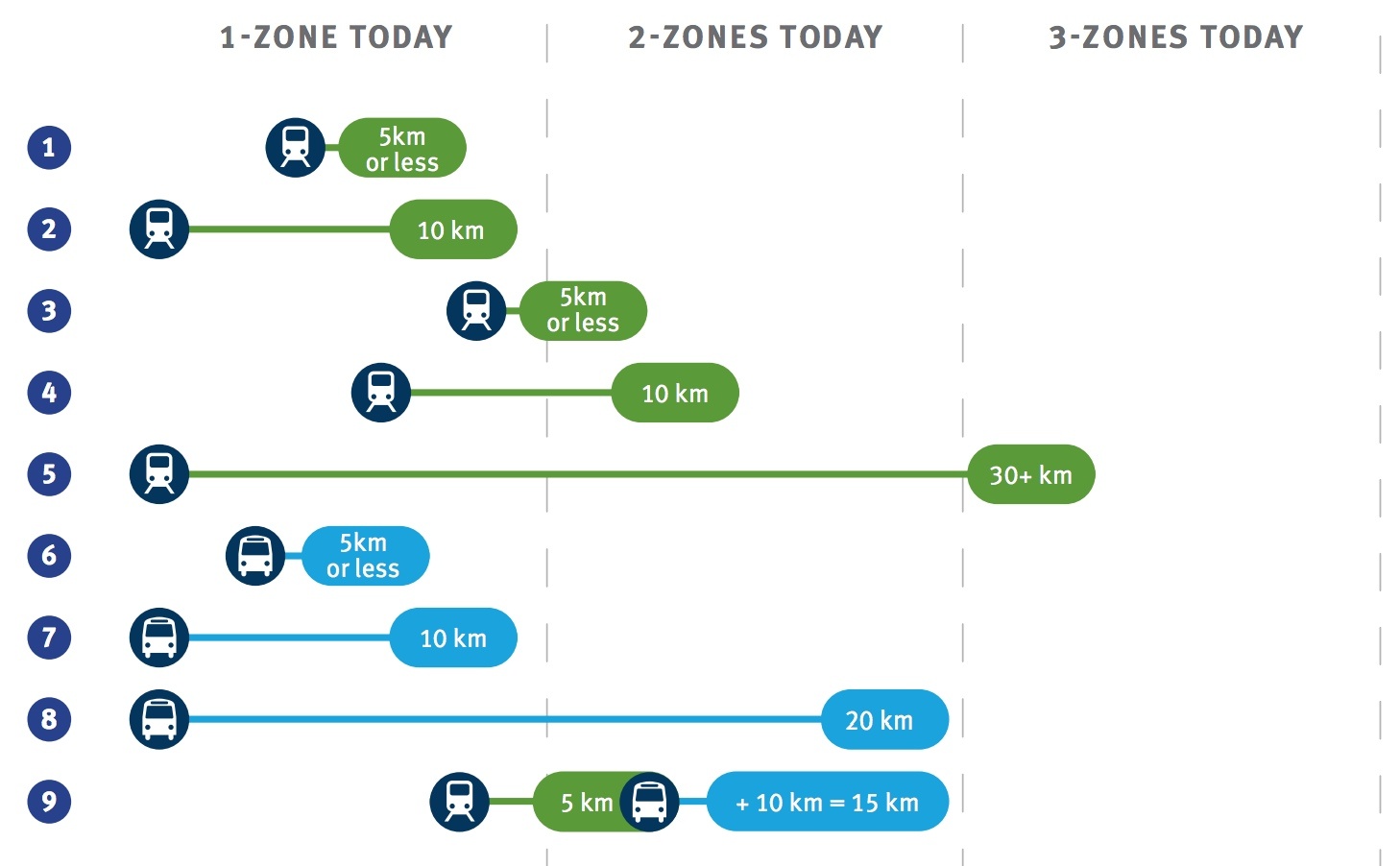 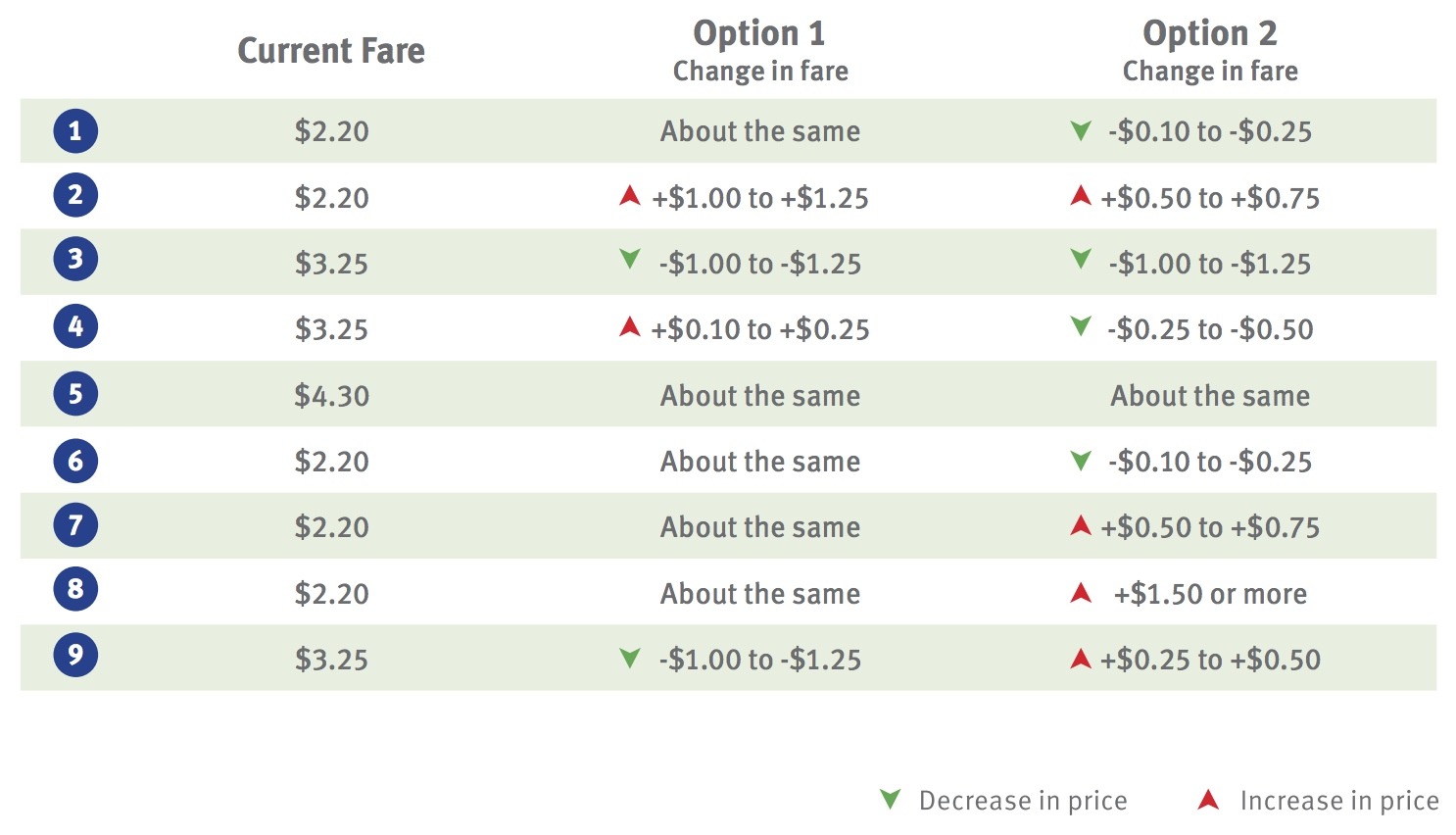 Monthly pass turns into a pre-paid pass or fare cap

A pre-paid, monthly pass could still be offered, but it would be different than the current monthly pass.

One option would be a pre-paid pass, which allows passengers to pay in advance for unlimited travel during a set period of time, whether it be a week or month.

With the pay-as-you-go fare capping option, passengers pay the regular fare for each trip until they hit a certain threshold. At this limit, the remaining travel is free within a set period, such as a day, week, or month. 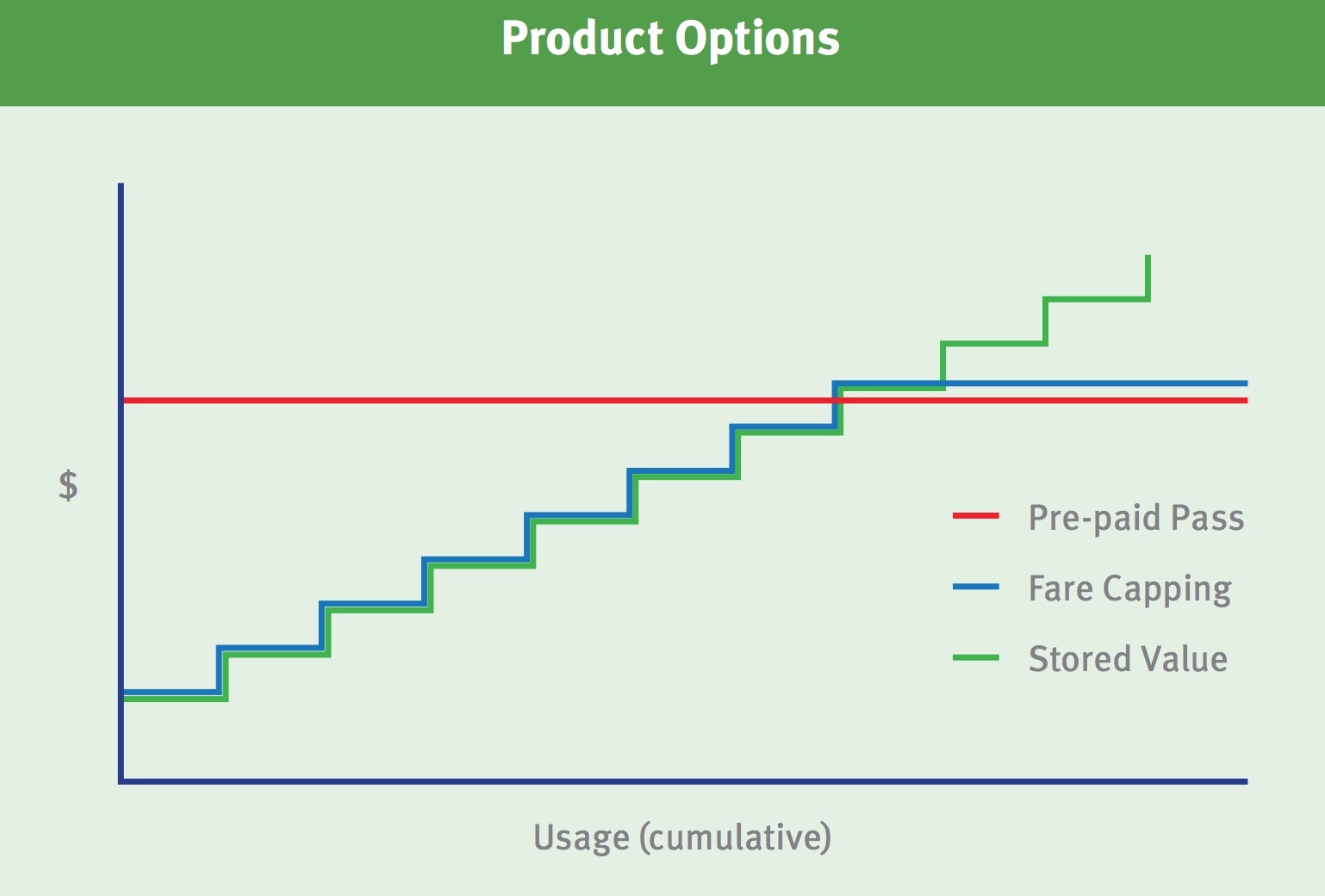 While there are some benefits, TransLink acknowledges there are disadvantages with both options.

Passengers who purchase a pre-paid pass, but do not use it as much as intended before the time period ends, will have paid more for each trip than without a pass. With the fare cap option, the threshold would likely be set slightly higher than the cost of the pre-paid pass.

New fare structure to be finalized in 2018

A new fare structure will be finalized in mid-2018, with implementation before the end of the decade. According to a survey conducted late last year, the idea of a distance-travelled fare system is supported by 70% of respondents.

TransLink is also contemplating small fare hikes of up to 10% for regular passengers to fund a 20% discount for individuals deemed to be low-income.

The last time TransLink changed its structure was in 1984, before the opening of the first SkyTrain line. Travel patterns, population, and transit services have significantly changed over the course of the past 33 years.

The fare review coincides with TransLink’s review on mobility pricing in the absence of bridge tolls.