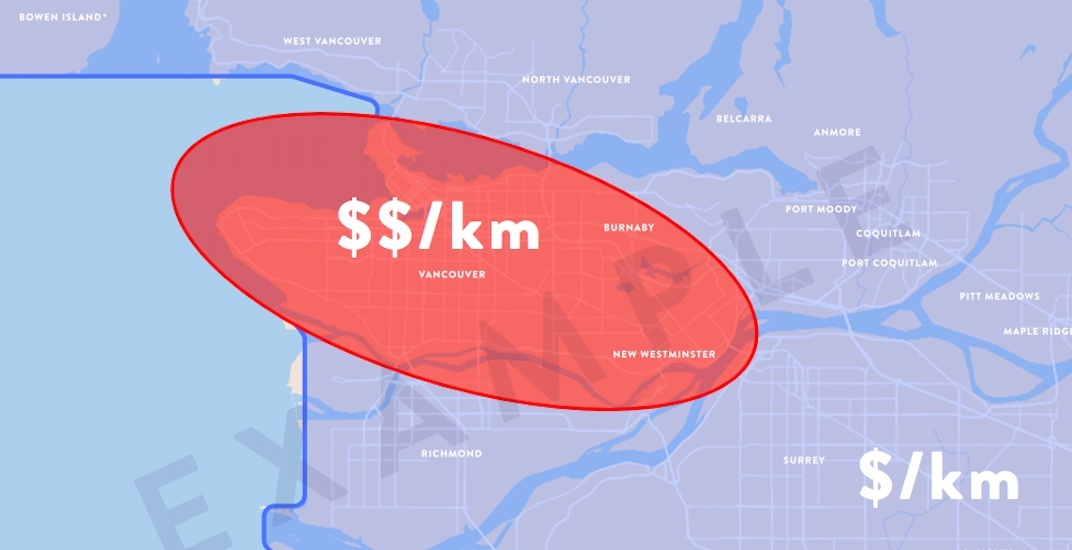 Those who get around Metro Vancouver by driving a vehicle now have a first glimpse of how mobility pricing could be implemented.

The Independent Mobility Pricing Commission recently released seven maps that highlight possible scenarios of how mobility pricing could be rolled out in the region, with the scenarios based on either a congestion point charge model or a distance-based charge model.

The commission is tasked with recommending a mobility pricing model that will help fund transit improvements over the long-term and reduce congestion through the optimization of road infrastructure investments.

“At a time when affordability has emerged as the most critical issue for residents and policy makers in this region, it’s fair to ask governments to find the most affordable ways to deliver the benefits all of us want – like less congestion or more transit.”

The scenarios are highly preliminary and are only deemed as examples for further consultation for the development of a real proposal:

Drivers crossing the congestion point charges in the metropolitan core will pay, and this charge could be higher in very specific congested hot spots and lower in less congested areas or areas with less access to transit.

It could also prompt some drivers to avoid travelling in and out of downtown Vancouver during peak hours, which would in effect help reduce congestion.

A similar model of tolls in the city centre is already in place in major cities such as London, Milan, Singapore, and Stockholm. 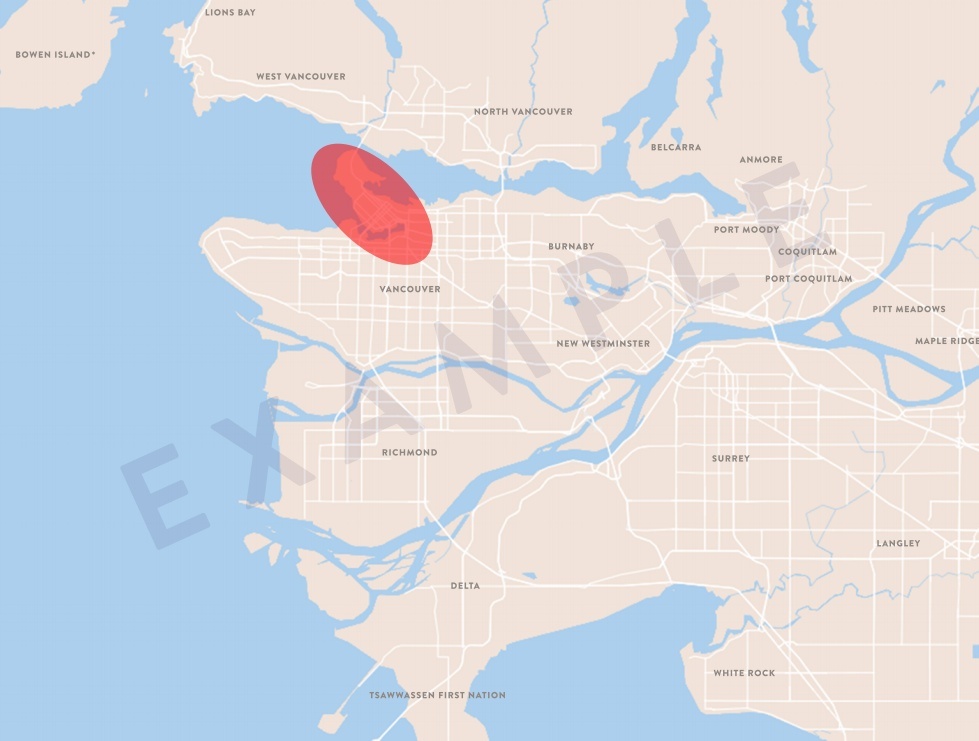 This scenario would target all of the region’s major bridges and tunnels for tolls, as such crossings make good natural boundaries and are all identified as congestion hot spots.

The charge would be higher in very specific congested crossings and lower in less congested areas with less access to transit.

Only crossings along the Fraser River and Burrard Inlet will be charged; there is no toll for the three crossings across False Creek. 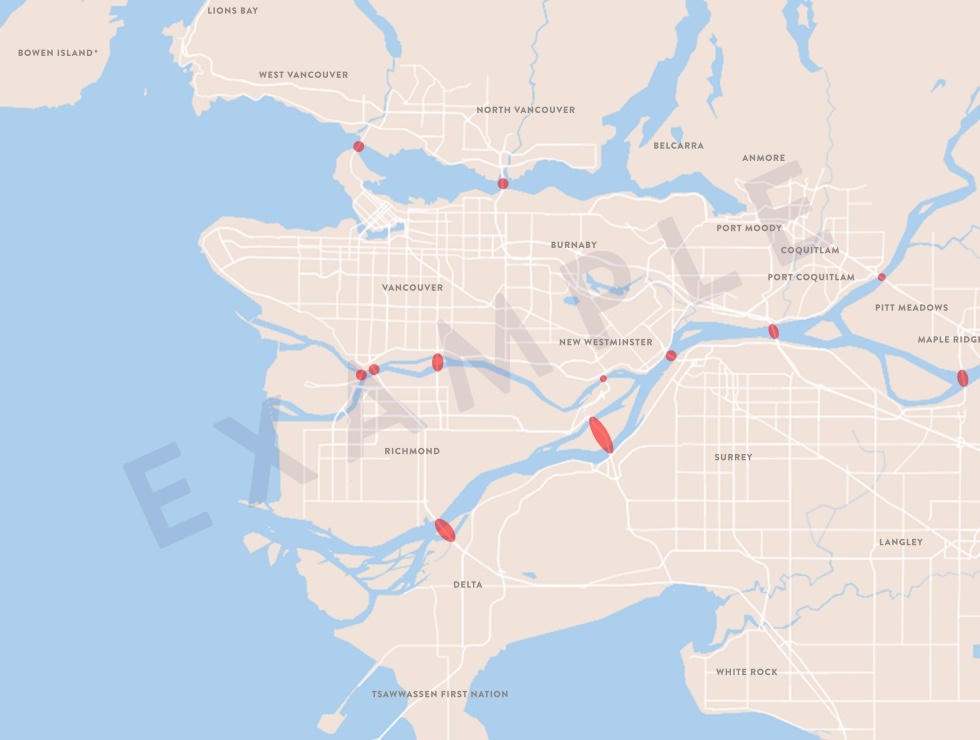 All of Metro Vancouver would be under one-zone. Drivers would pay a distance-based charge regardless of where they are in the region, but this scenario could vary based on the location, direction of travel, and time – specifically during peak hours.

It remains to be seen how such a challenging model could be implemented and collected. 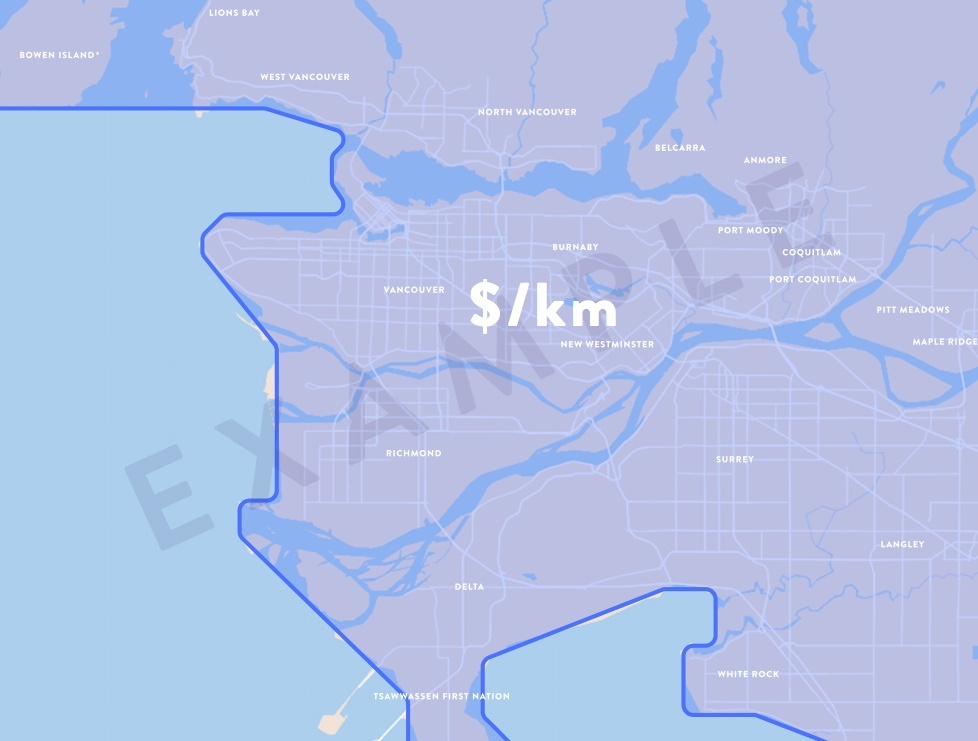 Drivers entering the Burrard Peninsula – Vancouver, Burnaby, and New Westminster – will be subject to a charge, particularly at specific congestion hot spots. This model is similar to Example 1’s Downtown Vancouver model, but has a larger geographical area. 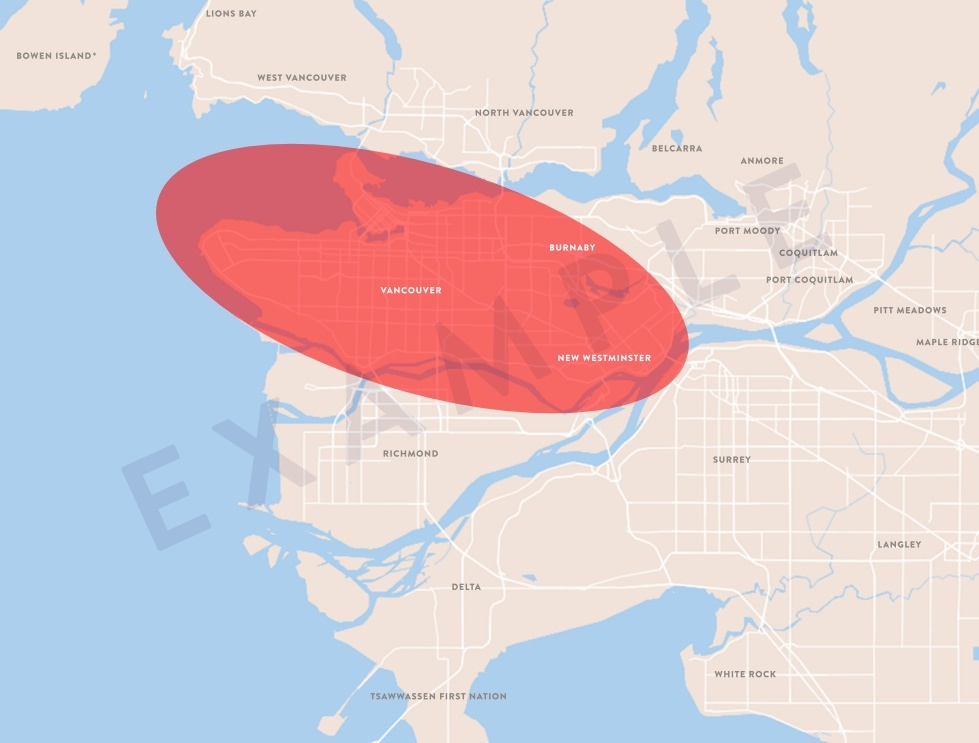 Under this scenario, there would be two zones for distance-based charges. Those within the Burrard Peninsula would pay more, as it is the region’s worst congestion area, while those in outside areas (south of Fraser, Tri-Cities, and North Shore) would pay less. 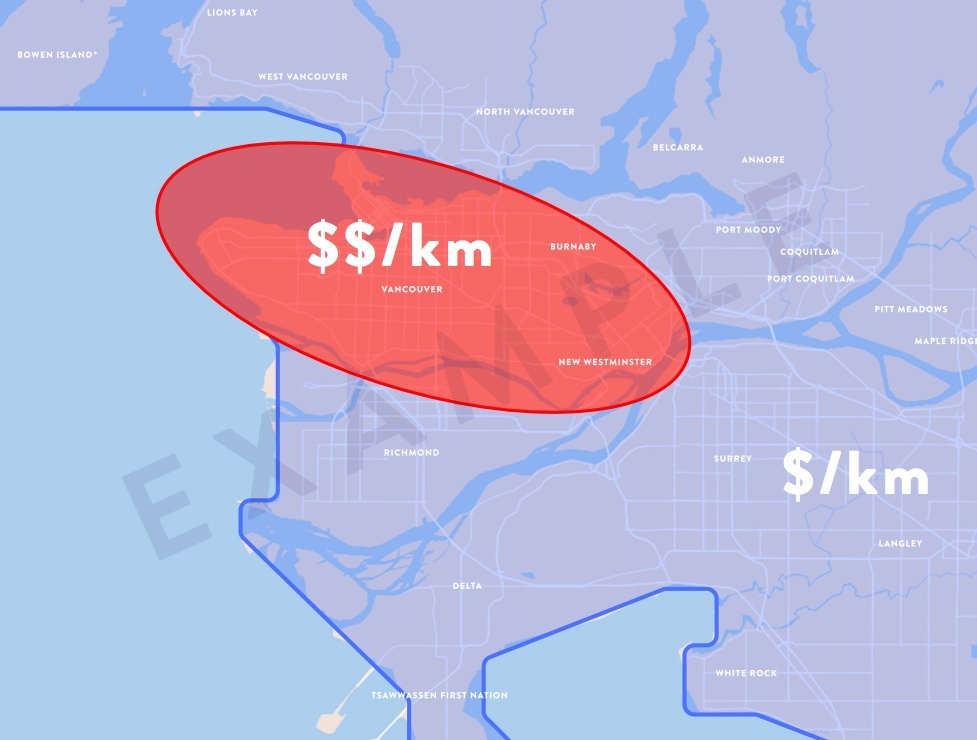 This scenario directly targets congested areas across the region, but like Example 2 it could lead to undesirable traffic diversion effects from people avoiding the tolls. 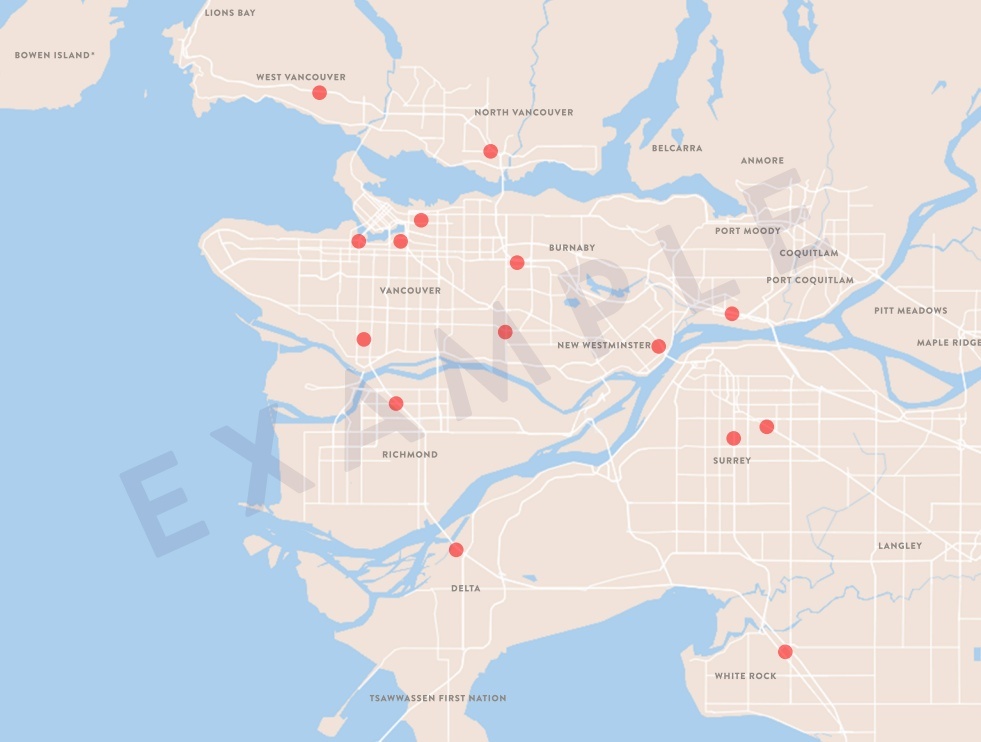 Applied regionally, the commissions says this example is “more effective” in dealing with congestion at hot spots and during peak hours without charging trips that do not greatly contribute to congestion. But it would likely be the most challenging and difficult to understand. 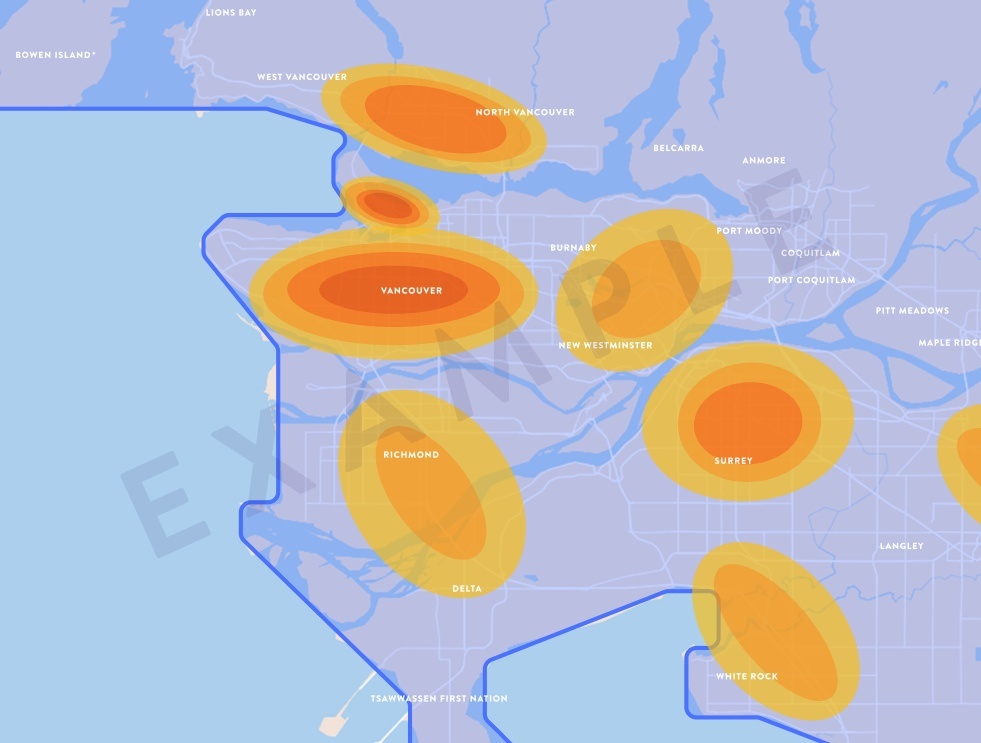 The commission will consider a wide variety of factors before making its recommendation, including providing discounts or exemptions for people who have fewer public transit options in their area or rely on driving for work, childcare, or medical appointments. Consideration will also be given to businesses, especially within downtown Vancouver.

A final report with its recommendation – complete with price structure – will be issued spring 2018.