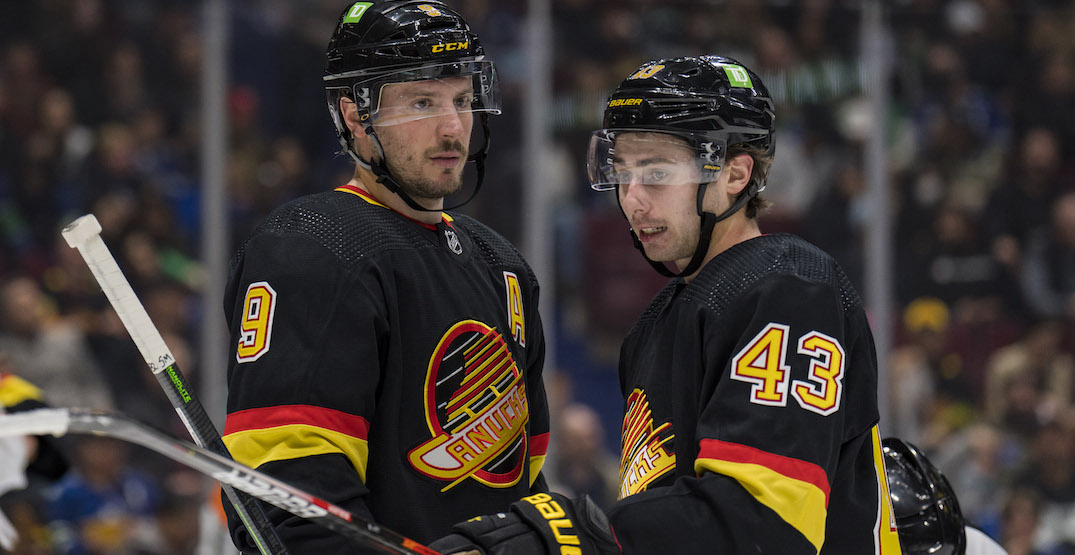 The Vancouver Canucks will be wearing their popular 1990s black Flying Skate uniform yet again tonight.

And if you ask me, I think it means something.

The Canucks have had a bizarre relationship with the Flying Skate jersey in recent years. Fans clearly love it, both inside and outside of Vancouver. But the team has seemed reluctant to wear it.

But that doesn’t mean there isn’t a place for the Flying Skate to take on a more prominent role.

The black Flying Skate jersey has been worn only periodically by the team in recent years. They wore it as a one-off during a game against the Toronto Maple Leafs in 2016, as part of the 20th-anniversary celebrations of Rogers Arena. The Canucks also brought it back for a handful of games during their 50th-anniversary season in 2019-20 — completely overshadowing the new Heritage jersey that was introduced at the same time.

The team quietly brought the Flying Skate back this season as well but waited until February 24 to show it off. There weren’t plans shared publicly to wear the uniforms again until this week when the Flying Skate was trotted out on Tuesday, and then again tonight for the last home game of the season.

It’s the first time since 1997 that the Flying Skate uniform will be seen in back-to-back games, and it’s causing my eyebrow to raise.

The Canucks aren’t saying what their plans are for the Flying Skate beyond this season, and maybe they’ll shelve it. But if they are planning to make it their new third jersey, which I think is a distinct possibility, they would have had to submit that request to the NHL by now — and perhaps they have.

Another clue that the Flying Skate could be getting a more permanent spot in the Canucks’ jersey rotation is looking at how they’ve used the Heritage jersey, which features the Stick-in-Rink logo, and is still the team’s official third jersey.

The Canucks haven’t worn the Heritage jersey since March 17 and it has been available at a significant discount on the team’s online store for months. It’s not uncommon for NHL teams to phase in or phase out a jersey, and perhaps that is what’s happening here.

For instance, the Canucks seemed to phase out their original Orca jersey, opting to wear their 1970s blue-green retro look for multiple playoff games in 2007, knowing that they were going to officially unveil new uniforms in the summer.

While the Flying Skate might not be the favourite jersey of ownership, I’ve been told there is at least one person in a position of power on the business side at Canucks Sports and Entertainment that is a fan of the 1990’s look.

While the Flying Skate doesn’t match the team’s current branding, given that it’s surely a money-maker for the team, perhaps others have been sold on it.