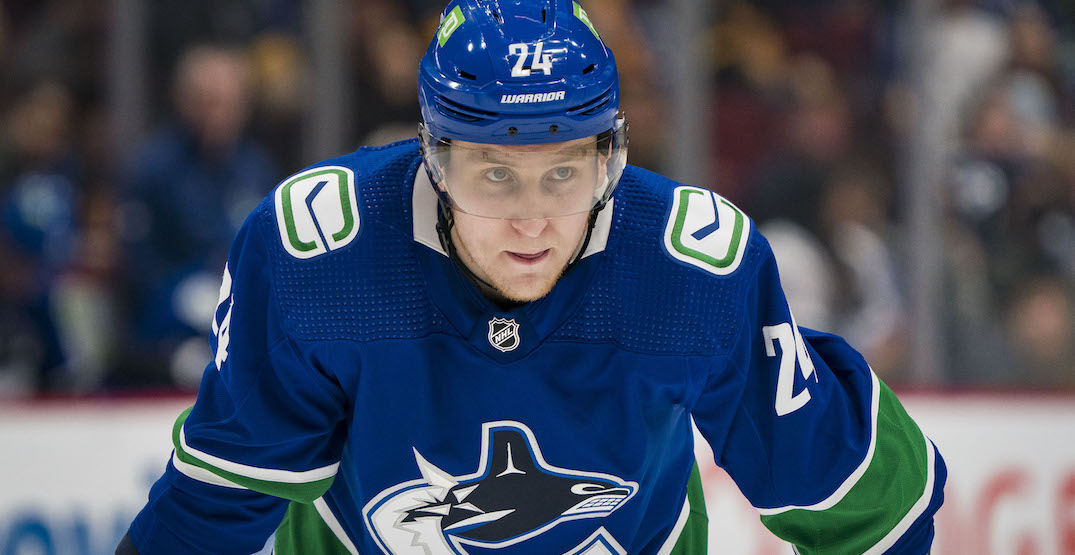 For the sixth time in seven seasons, the Vancouver Canucks will be missing the playoffs.

A major catalyst for their lack of success over the last seven years has been their inability to build a capable defence.

Could Travis Dermott be part of the solution moving forward?

The 25-year-old was a steady, bottom-pairing defenceman through parts of four seasons with the Toronto Maple Leafs. While he’s proven to be a capable NHL defenceman, he was surpassed on the Leafs’ depth chart by younger players with higher ceilings, such as Rasmus Sandin and Timothy Liljegren.

So far through 15 games with the Canucks, he’s showcased his best traits: skating, moving the puck up the ice, and defending the rush.

2-on-1? Dermott says, no problem ❌ pic.twitter.com/Nr5dsKIHjh

GM Patrik Allvin and the Canucks management team desperately need to rebuild their blue line. It’s arguably their most pressing task heading into the offseason.

Quality top-four defenders are hard to find, especially ones that play the right side. That’s why this team needs to find their own version of a John Marino — a diamond in the rough.

With Dermott signed for another year at just $1.5 million per season, does he have a chance to provide surplus value for the Canucks next season?

While the sample size is small, the early returns are promising.

Breaking down Dermott’s impact with Canucks

Kyle Burroughs said it best earlier this month when asked by Daily Hive about the scouting report on Dermott.

“A lot of poise with the puck. He’s a really skilled player.

“He can play both sides of the puck too, defends really hard, and we’ve seen some skill come out in the offensive zone.

“You know, he’s a great player, easy to play with, he’s a nice guy from what I’ve gotten to know him and he’s fit in really well.”

Not only is he a nice guy, but he’s delivering some nice underlying results on the ice.

In his 15 games since joining Vancouver, Dermott leads Canucks defencemen with the lowest expected goals against (2.29/60) and the fewest scoring chances against (25.1/60).

Only Quinn Hughes has been on the ice for fewer even-strength shot attempts against than Dermott since March 22.

Deployment certainly has played a role in Dermott’s success. The top two Canucks pairings (Hughes and Luke Schenn, Oliver Ekman-Larsson and Tyler Myers) have an offensive zone start percentage below 50% since the trade deadline. Dermott and his most regular partner, Brad Hunt, are both above 60%.

That shouldn’t take away from the fact that when Dermott’s been on the ice, the team has been better defensively.

This chart from Hockey Viz shows how Canucks defencemen have performed when Dermott isn’t on the ice. 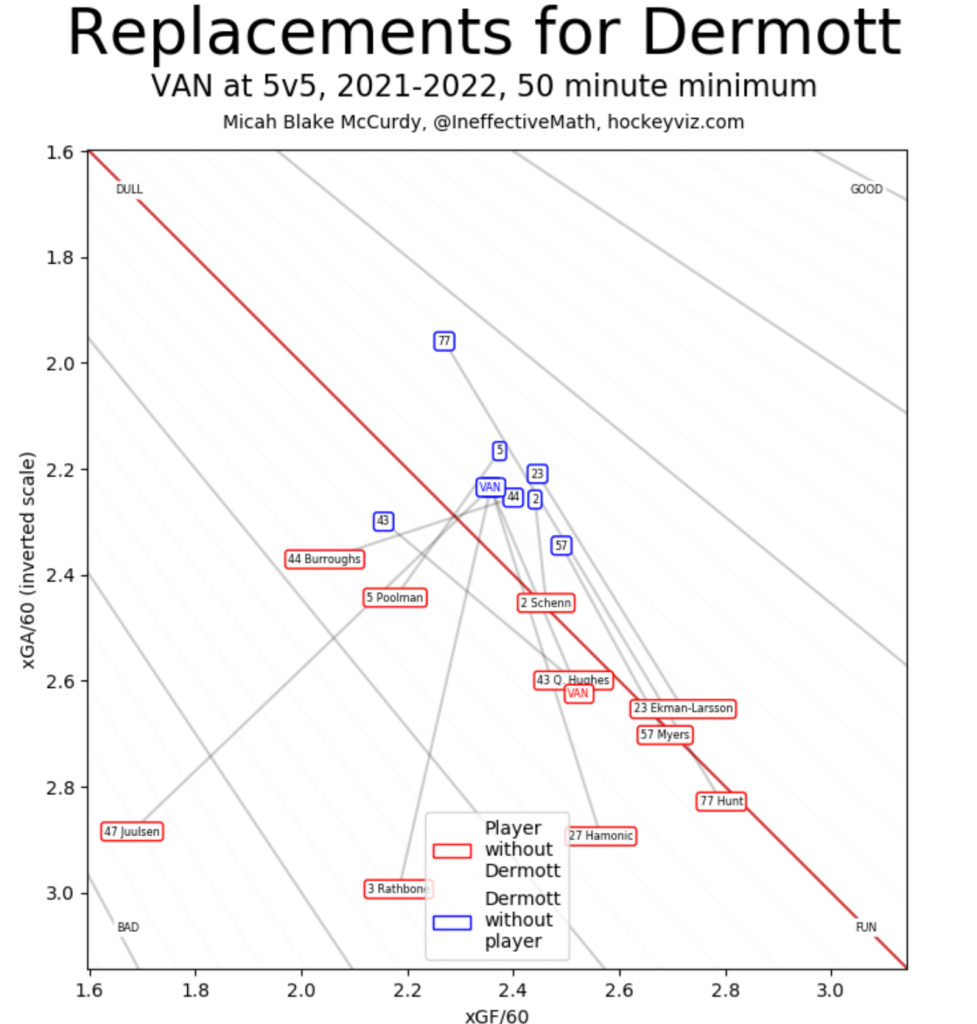 The main takeaway from the chart above is that every Canucks defender hasn’t been as effective defensively when Dermott isn’t on the ice.

Aside from the sample size, the other takeaway here is that Dermott is a low-event hockey player. That’s evident by the fact that all of Hughes, Ekman-Larsson, Myers, and Hunt have a better expected goals-per-60 when Dermott isn’t on the ice.

Can Dermott be a reliable penalty killer?

If the Newmarket, Ontario native is going to blossom into an effective, top-four defender, he’ll inevitably have to take on a larger penalty-killing role.

With the Maple Leafs, Dermott was never trusted with a prominent shorthanded role for an extended period of time.

He did average over a minute per game on the kill during his second and third years with Toronto. During his last season as a semi-regular penalty killer back in 2019-20, Dermott’s 5.6 expected goals against was lowest among all Leafs defenders.

However, as Dermott’s role diminished in Toronto, so did his time on the penalty kill.

With the Canucks, Dermott hasn’t been handed a regular penalty killing role yet, although his underlying numbers are solid. He’s also yet to be on the ice for a goal against during his 15:16 of shorthanded ice time.

It’s evident that Dermott has performed well in his limited time with the Canucks.

The real question is, can he be trusted in a larger role?

That remains to be seen, although with a cap hit of $1.5 million, it’s perfectly acceptable for him to continue locking down a role on the bottom pair.

With that being said, it would be a huge bonus for the Canucks if Dermott could provide surplus value on his contract.

Stylistically, Dermott might remind fans of well-regarded former Canucks defenceman Dan Hamhuis. The pivotal member of the legendary 2011 Canucks squad had many of the same great traits defensively in the sense that he used his speed and positing to check the opposition, as opposed to being a physical force.

It’s unrealistic for Dermott to ever get to Hamhuis’ level, but the relatively young defender has at least earned a chance at a bigger role heading into next season.